Every team needs a skilled leader, not only in battle but also in music. Such is the case of BTS Bangtan Boys: a team of 7 talented guys with distinct personalities, but managed to unite together. Of course, people like Jimin – Angel of BTS is important to keep the team close. But he is not the only one with such mission; it is also the job of BTS leader: Rap Monster. No doubt Rap Monster is a talented and brilliant rapper and a leader. And surely, we cannot just ignore a beautiful person like him and today, let’s find out more about BTS Bangtan Boys leader – Rap Monster!

*Note: The analysis here are based on our own impressions and fans’ opinions about Rap Monster. 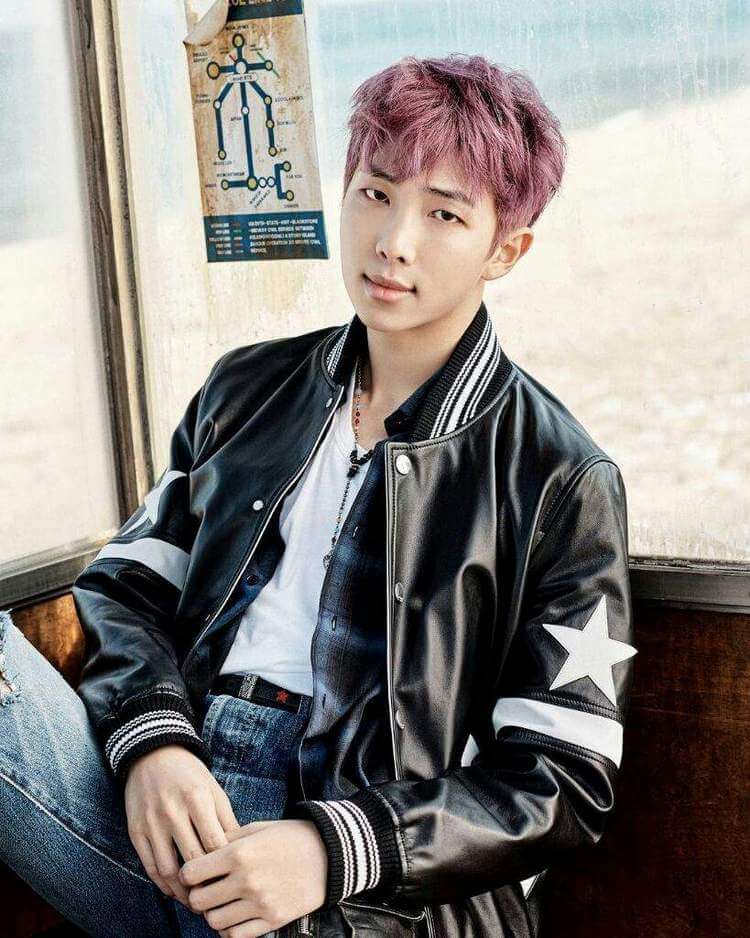 Kim Namjoon (김남준), or mostly known as Rap Monster (or RapMon for short), is the leader of BTS Bangtan Boys and he is also the main rapper, sub-vocalist, and dancer of the team. He was born on September 12, 1994 (which means currently he is 23 years old) in Ilsan, South Korea. RapMon is extremely intelligent and his IQ is estimated to be 148. According to his academic record, he was among the top 1.3% of the nation in the preparatory university entrance exams. He also seems to be very skilled at languages; specifically he can speak Korean, English, and Japanese. His English is really good, he got 850 on the TOEIC test during his junior high and he said that he self-learned English via watching American sitcom Friends. 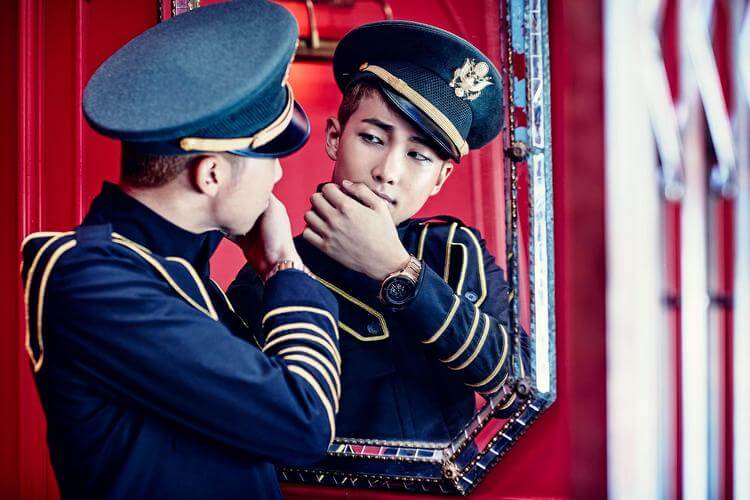 Before his time with BTS Bangtan Boys, he was already a well-known underground rapper under the name “Runch Randa“. He has also worked with many other rappers and produced a number of collaborated tracks like with his fellow rapper Zico. Even during his time with BTS Bangtan Boys, he still continued his collaborated and solo works, notably his solo mixtape RM on March 20 and his co-produced work with Bang Shi Hyuk for Homme‘s single “Dilemma“.

In terms with BTS, RM was actually the first member recruited for the team and trained along with J Hope and Suga. Together with other BTS members, he got his first debut with the track “No More Dream” from BTS debut album 2 Cool 4 Skool. Ever since their first debut, RapMon and the team has achieved various succeeds, including their winning of Best Social Artist Award of MTV Billboard 2017 and their 2nd year winning in-a-row with the Artist of the Year Award of 2017 Mnet Asian Music Award. 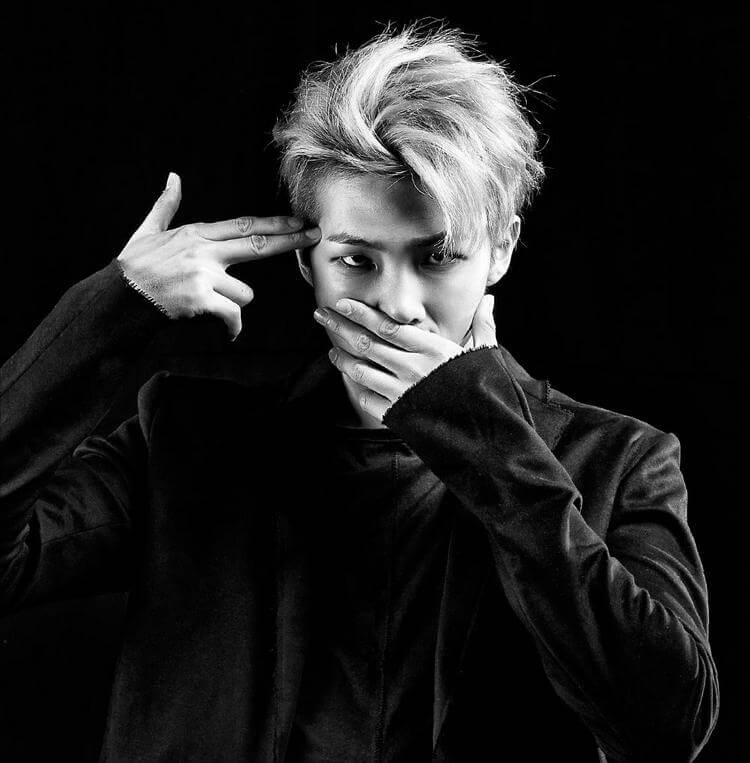 As mentioned, Namjoon is known for his genius intelligent level. He is extremely smart and he often has lots of mature thoughts and he seems to be more adult than many other people of his age. This high intelligence is clearly a big advantage for him as a leader since he can point out what needs to be done and envisions the team’s future.

Interestingly for some reasons, certain people deemed Kim Namjoon as many questionable “things” like being prideful or ignorant. However, throughout his time with fans and his BTS fellows, such comments are proved to be untrue. Despite being very, very smart; RapMon is actually more humble than we may think. He has no problem in make new friends, for example other fellow idols and groups. And he likes to understand people and their diverse originalities, rather than boosting about himself or ordering. He may look “prideful” on stage, but isn’t that one of an idol’s work? 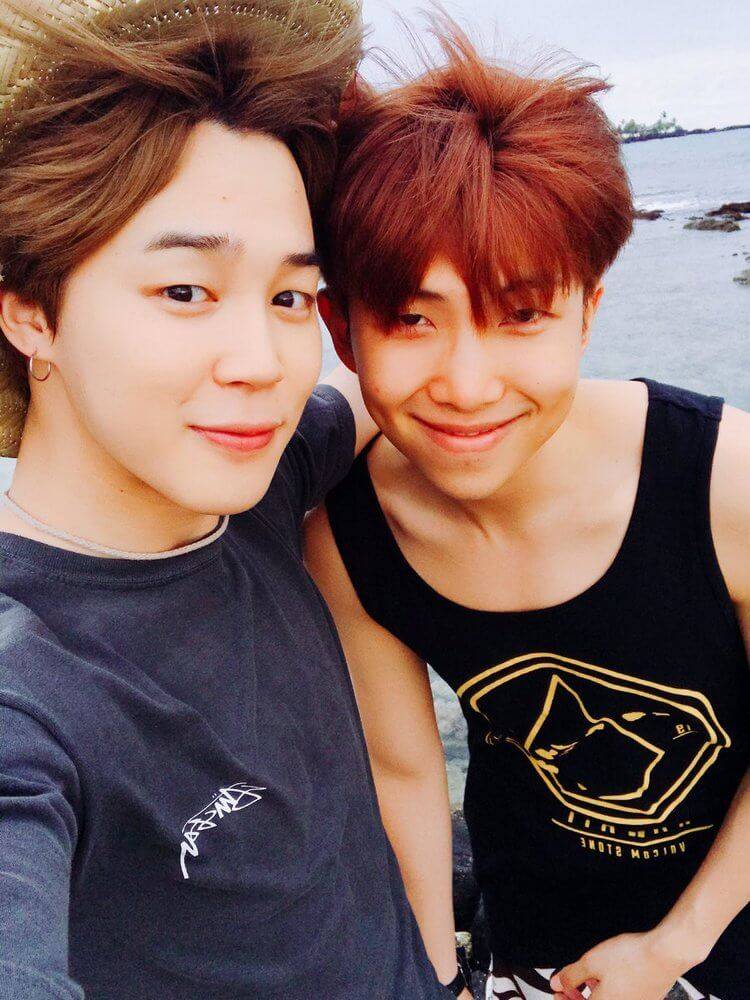 As a leader, RM cares a lot about his teammates and they often seek RM for advices. He also enjoys making fun and fooling around although he does not seem to like it at first. But after all that, RapMon’s personality is more towards introvert type. When he is alone or having free time, he prefers to spend time reading books (and he has read a lot). He also thinks a lot of deep questions about himself and meaning of life. He is quite open in expressing his mind and his troubles, for example:

– Why is there no opposite word of loneliness? Could it be because people, until they die, have no moments of not being lonely?

– Happiness is not something that you have to achieve; you can still feel happy during the process of achieving something.

But still, as we mentioned, being deep and thoughtful like RapMon does not mean he always maintains such state. He knows exactly when and how to express himself and share the moments with BTS members and fans. He can be very funny and “twerky” at times and he does not mind making fun (or being made fun) of himself to lighten the day.

And for those who have not understood why Namjoon has the nickname “God of Destruction”, it is because he has tendency of being “clumsy” and “breaking things” around him or in his touch. (And oh, he is kind of… a secret perv in case you want to know) 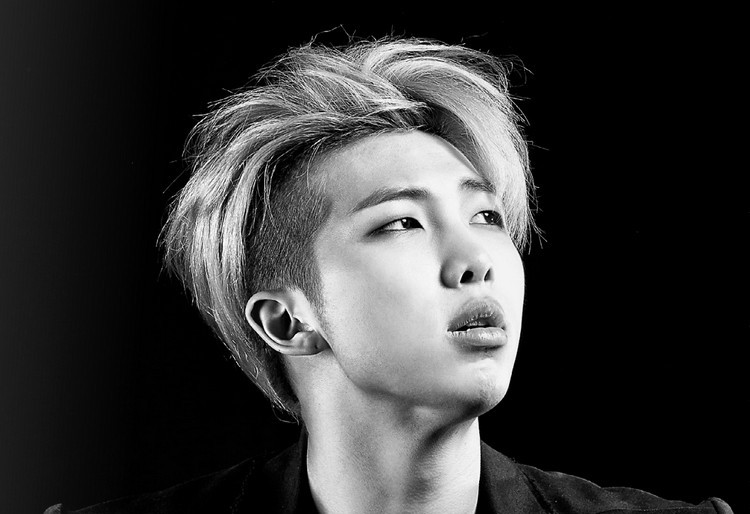 Before the “official data” shared among ARMY recently, many fans have tried to speculate which type of MBTI Rap Monster is. And among the fans’ guesses, INFP is seems to be the best match. Luckily, according to the “official data”, it is confirmed that RapMon’s personality falls to the INFP – The Mediator line.

The main trait of a Mediator is that they are idealists. They mostly seek (and skilled) for metaphorical and hidden meanings. In other words, they are deep thinkers and they often like to know the meanings behind things around their life. They also tend to look for both good and bad part of a person or thing to make things better. This idea matches perfectly with Rap Monster’s personality since we have already seen RapMon as a deep thinker. He had quite a lot of interesting questions about life in such metaphorical way. Besides the quotes he had above, we have other examples such as:

– Why is there no opposite word of loneliness? Could it be because people, until they die, have no moments of not being lonely?

– Too many stars, too many dreams. The reality is that in front of these things, I’m just a speck of dust. In addition, RapMon proves himself to be a humble person and he wishes to see and learn the good people rather than being “arrogant”. Despite being smart, he does not brag about it. Some people may misunderstand him as “prideful” and “arrogant” but it is just a downside of The Mediator which is only being able to talk with certain people. His deep thinking can also be a problem because not everyone can understand his good intention and the meaning behind his words. They tend to interpret his sayings based on their own experience rather than understanding his true intent and what he truly meant. These “downsides” are also the problems of INFP line as they are often in risk of misunderstanding.

That said; those who can actually overcome those obstacles and make friend with INFP people will know that INFP people are true joy to hang out with. Such is the case of RapMon. Other BTS members respect him and often seek him for advices. Hanging out with Rap Monster is also fun since he knows how to lighten the mood with jokes and funny moments. 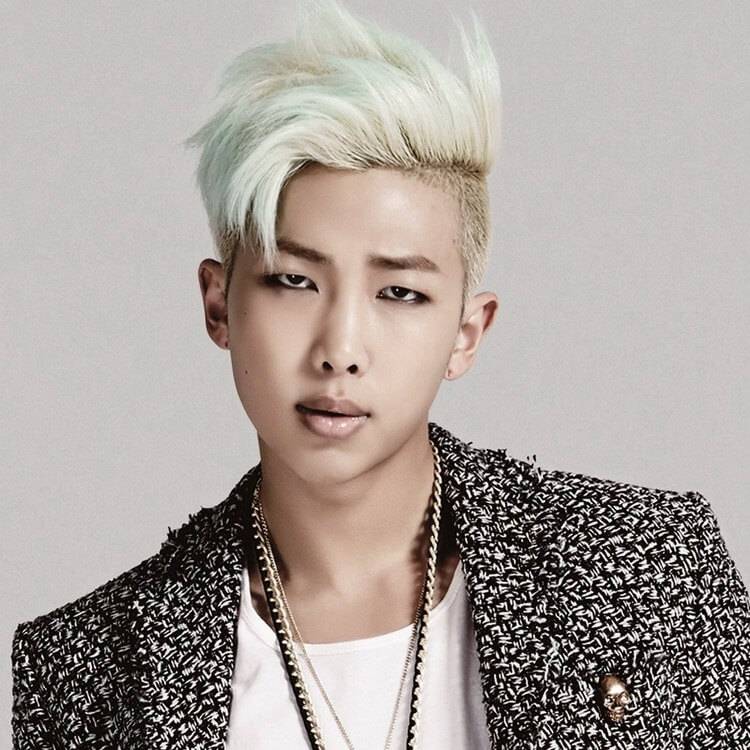 Rap Monster’s birthday is September 12 which placed him in the Virgo line. The main aspect of a Virgo person is that they are extremely aware even the smallest details. People of Virgo line are hardworking, analytical, practical, loyal, and kind. In case of Namjoon, it seems his Virgo personality reflects quite strong via his life. By the look of it, Namjoon may not look like a person paying to attention much. But let’s not forget that Namjoon is a perfectionist and even he admitted that himself. As a perfectionist, he often tries his best even with the smallest things and of course, he works extremely hard, similar to a Virgo. RM also shows strong sense of analytical, loyal, and kind as he often gives constructive ideas and recommendations for other BTS members when in need.  He is also kind towards people who know him, especially the BTS Bangtan Boys and his fans. Practicality seems not so match with Namjoon since he often has metaphorical thoughts. But it does not mean that Namjoon never thinks about practical things since as we mentioned, he gave constructive ideas and suggestions for his teammates.

Aside from those strong points, Virgo people are actually shy. This is not contradicting to RapMon’s INFP since RapMon does admit that he is shy, although he clearly shows certain level of confidence on stage. It is also probably because of his deep thoughts since not many people can understand his mind and also, as a INFP, RapMon often questions his own meaning in life. There is another downside of Virgo which is overcritical on oneself. Again, this weakness is not against Namjoon’s personality since he is a perfectionist. Furthermore, Namjoon also thinks that he cannot live in alone-style like Suga since isolation will only depress him.

*Note: The information shared here based on the basic data of Horoscope. The Horoscope is actually much more complicated and therefore, there may be certain things listed here which you don’t think it’s true in reality. 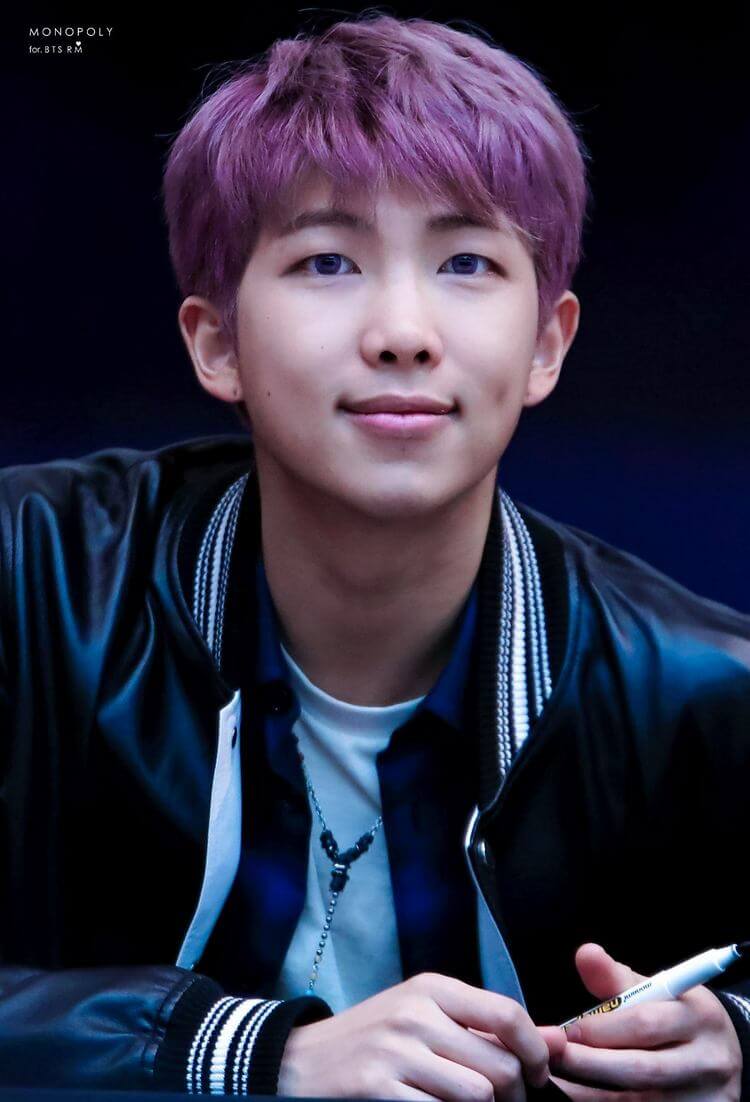 In RapMon’s case, high chance that his temperament belongs to Melancholy line. People of Melancholy type are introvert, sensitive, and analytical. They often find the hidden meanings behind words and they usually think before responding someone. As the results, they tend to be deep thinker and they care a lot about how other people think about themselves or their work. A Melancholy person can also be perfectionist. They are kind of obsessed with doing the right things and being meaningful; therefore, they can be hesitant when making decision and they dislike wrong choice. Striving to be meaningful also means they tend to worry a lot about things. All of these qualities match with Namjoon’s personality, and that’s what makes him a fine leader of BTS Bangtan Boys.

As a deep thinker and perfectionist, Rap Monster is indeed a great leader of BTS Bangtan Boys. He has a sharp mind, yet he is actually humble and kind towards people around him. His analytical and language skills allow him to make lots of deep thoughts and questions about life. They also allow him to think what will be the best for the team and give advices for his teammate in need. That’s what makes him a great figure. And even if we ask the question “who would be the best leader for BTS Bangtan Boys?” The answer will still be Rap Monster.

So what about you? What do you think about Kim Namjoon a.k.a Rap Monster a.k.a RM? Feel free to share with us and for now, thank you and stay tune for more news in the future!