Ada Wong: As Alluring As Ever

Everyone who is fan of Resident Evil series definitely remember “Leon Kennedy’s crush” – the double-agent Ada Wong who constantly appears in any event which Leon involves. Back in the day, players could not clearly see her character model in-game. But with Resident Evil 2 Remake, she’s finally back and this time, she looks fantastic! 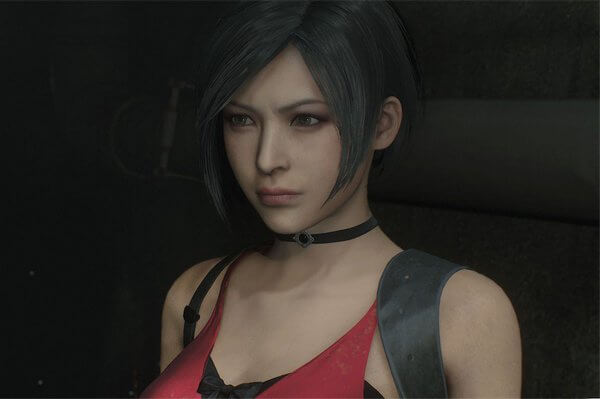 Who said Ada in this remake does not look good? (Source: Internet)

Well enough of her beauty, what about her gameplay then? Based on the recent Resident Evil 2 Remake demo, it seems Ada’s part will still mostly about spy-style gameplay. To be more specific, her gameplay focuses a lot on puzzle solving and avoiding the enemy rather than fighting them head-on. This time, Ada is given a new toy to play with: the EMF Visualizer. This “gun” allows her to see the hidden electric wires and connections in order to hack them and open the path. She also has a pistol but frankly speaking, its fire-power is rather weak and therefore, players will have fire loads of bullet to just take down one zombie. Plus, it seems there is no healing herb in her gameplay section so you will have to be extremely careful. 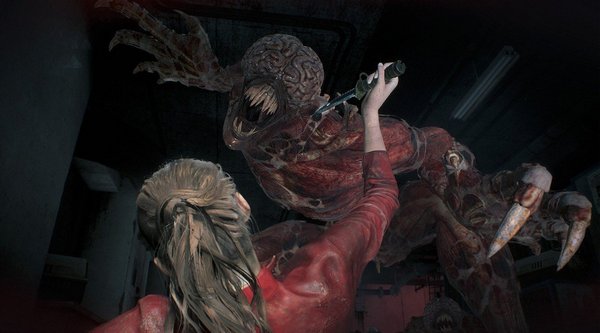 The Licker is one of the most annoying and also terrifying creatures in Resident Evil 2. And this time, they got some really incredible makeovers. First off, coming to the next-gen, these nasty monsters look extremely detailed: typically their skin-less body and that disturbing brain-exposed head.

But of course, having disturbing look does not make this monster scary. What truly makes this monster scary, especially in this remake, is how well they move around. Coming to the 3D world, these monsters cause even more paranoid as they can flexibly jump on wall, crawl on the ceiling, and then do their nasty stuffs: licking the target with their abnormal long tongue, suddenly jumping on the target and tear the enemy with its claws.  Not only they are hard to shoot at, they are also too durable for their good… Oh boy it seems we’re going to have another nightmare of Licker jumping on our body when we sleep… 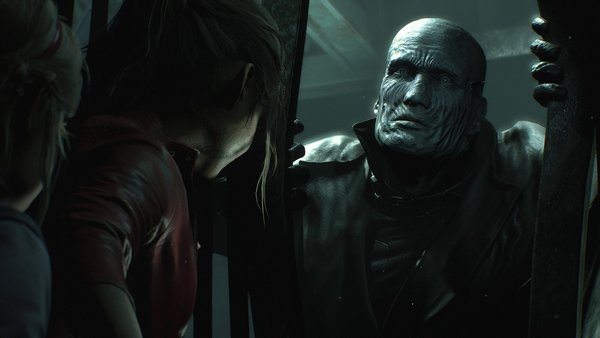 Back in the day, the guy called “Mr. X” (or “Mr. T” as somebody like to call it) was probably the one who scared players the most. Not only players had to deal with the clunky tank-like character control, they also had to navigate the corridors in panic mode as this unstoppable horror kept marching towards them. Such a good ol’ day… And if you like to see such thrilling experience again, we are glad to say that Mr. X is finally back in he is much scarier than before.

His first appearance in Claire’s section is the best introduction to this hulking beast. This guy, out of nowhere, suddenly breaks the obstacle and marches towards Claire. He still wears a black suit covering his entire body, and better than that, he has a black top hat which gives him even more menacing look. His unstoppable nature is still as crazy as ever. No matter how much bullets we shoot at his head, he still keeps coming and gives us an insane punch. Of course you can use certain weapons and bullets to “hurt” him; however, such menial attempt can never kill him. Attacking him may only stagger him for a little bit, which means you will have to use such short moment to run away from him.

Do you truly believe that such menial bullets would stop Mr. X? (Source: Internet)

To make things worse, Mr. X is not the only thing Claire has to pay attention. As she running around the police station to find clues, she will also encounter many other pesky zombies and Lickers. This creates even more paranoia and intense moments as players have to break through the zombie hordes while at the same time being chased down by Mr. X. And as the players hide from him, they will keep hearing his boots’ sound. The nearer he is, the louder his sound, which causes even more intense feeling (And before someone may ask, closing door will not stop him. He will chase you to end of the Earth).

Zombies have always been an important element in every Resident Evil game and obviously Capcom probably have put lots of effort to bring this classic monster to life.

According to Capcom producer Tsuyoshi Kanda’s interview with Polygon, he expressed that Capcom is well aware of zombie-game state nowadays. Unlike the 80s-90s when zombies were still a fresh new thing in both film and gaming; people of current age are all too familiar with these creatures (And as Kanda noted: “they’re kind of the low-level enemy in the video game enemy hierarchy”). Therefore, one of the development team’s main goals is to enhance the zombies in both terms of visual and physics. 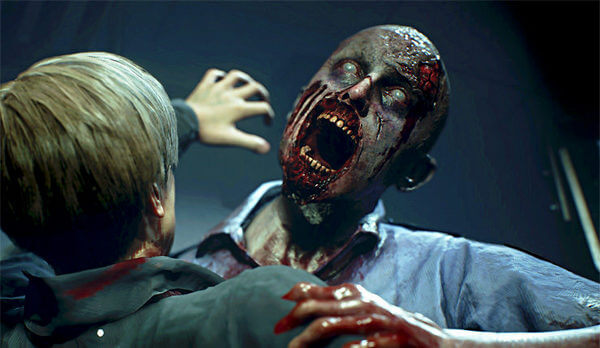 And true! Based on various Resident Evil 2 Remake demos, the zombies truly look great and have incredible movements. Just like what Capcom producer stated, those zombies look so detail, disgustingly details even (which is a good thing). When players shoot at a zombie’s body part, its part does not simply explode. Players can clearly see the bullet impact on the zombie, including how it is staggered, the damage caused on each body part. Then when players deal enough damage on a body part like legs or arms, it does not just explode and instead, they can actually see the part separated. Even better, zombie head is no longer exploded like balloon when being shot at. Instead we can see its head deformed or split in half. 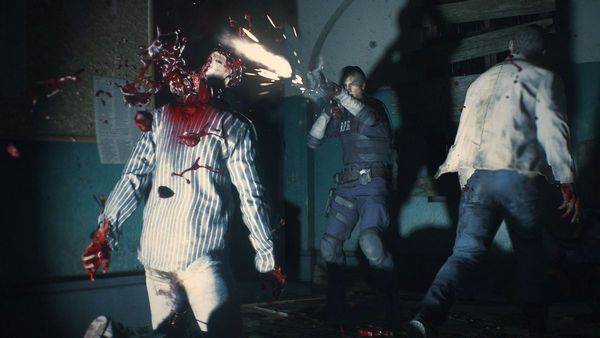 The gore is in a whole new level now. (Source: Internet)

Such details are important since zombies in Resident Evil 2 Remake are truly tough. Players cannot simply shoot at their head with few bullets and expect them to die completely. In some cases, a zombie can still scare the hell out of player by suddenly standing up despite knocked down by a number of headshots. Zombies also move realistically when they are shot at different parts. Shooting at zombies’ leg will make them move slower and better, breaking their leg will cause them to fall down, forcing them to slowly crawl.

Combining such details in visual and graphic with claustrophobic environment and tougher zombies really makes the game feel scarier. Resident Evil 2 Remake does not rely on hideous zombies alone to scare you. It put you into a paranoia situation where you have to struggle to survive, not becoming a zombie-slaying hero.

There will be lots of new stuffs in this remake

It is probably clear by now that Resident Evil 2 Remake will not be “just-an-another-graphic remake”, in fact, it will include lots of new changes to the gameplay and even story as a whole.

– I feel like I’ve gone back and forth a lot. You know, we see-sawed a lot between total respect/recreate the original, and then bring something new. Players today need something new to experience, and the team all have got their own individual memories of playing the original game and how they felt about it, and what they wanted to bring to the new project. And I think that over the course of the three or so years of development, what we’ve arrived at is what people played at the show. It’s hitting all the beats that you’ll remember, but it’s taking time to also bring you something fresh in between those. 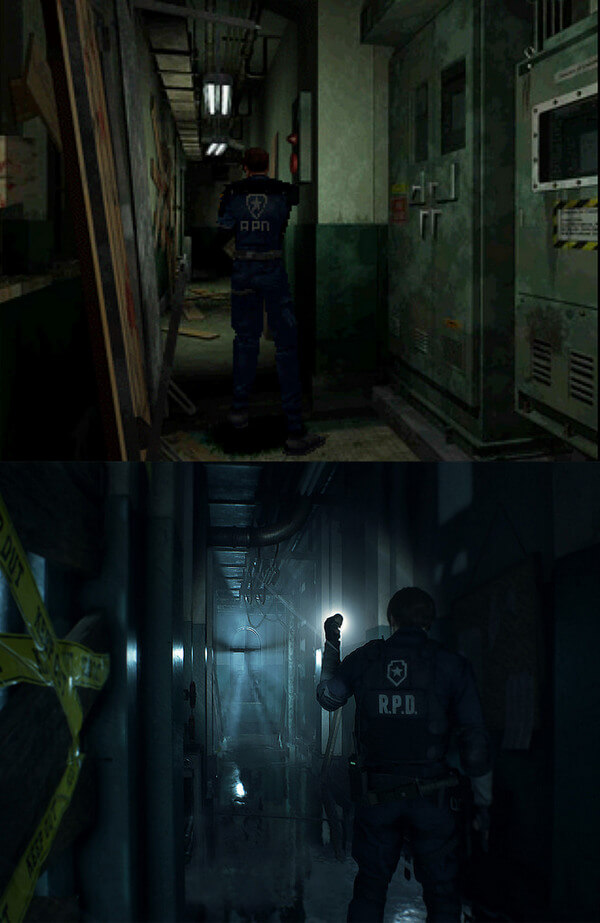 Original RE 2 (above) and RE 2 Remake (below) (Source: Internet)

When we saw the very first RE 2 Remake demo, we could already see how difference this re-created experience would be compared to the original game. By changing the camera angle and re-creating the world of RE 2 with RE Engine (the same engine used for Resident Evil 7 and the upcoming Devil May Cry 5), players can re-live the classic horror experience from a different perspective. This opens new opportunities for Capcom to recreate and reimagine lots of old and new stuffs like the puzzles and even new story bits. 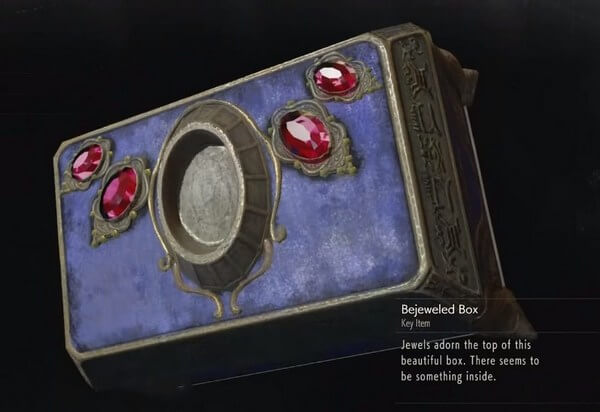 Also, there will be other nice changes to the game, for example: Uncollected items like herbs or gunpowder will be marked on the map which will remind players of what they forgot to pick up last time. In addition, item examination element is also further enhanced as players can see a complete 3D model of the item. They can rotate the view and see the item from different angle in details. Thus, such detail examination is necessary since players will find clues for progression, or discover some cool stuffs for their journey.

As for the story, currently it is still unclear how Capcom will expand it. However, we can pretty much expect some cool changes to how the story progresses, especially when the old Zapping System will not reappear in this remake.

If you’re afraid that storage-size requirement for Resident Evil 2 Remake would be around 35 to 50GB, don’t worry because surprisingly the game’s size is only around 21.07 GB according to Microsoft Store. Though the game’s size on PC and PS4 could be different, we still believe that the difference in size would not be all that huge. In case you’re concerning about the game’s system requirements, here’s the details:

And that’s it folks! What about you? Are you interested in Resident Evil 2 Remake? Feel free to share with us and for now, thank you and stay tune for more news in the future!