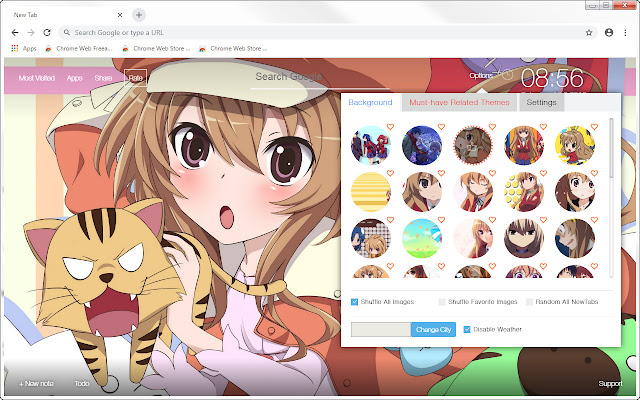 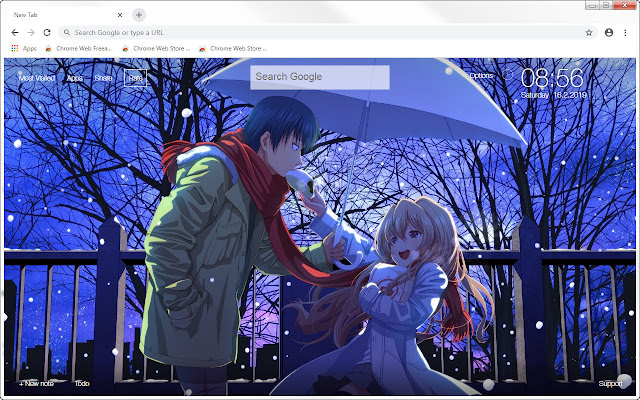 ★ What can you get from our Toradora themes?

First, you can enjoy a wide range of Toradora wallpapers in HD quality. You can shuffle all pics, or, shuffle your favorite pics only. You can also select Slideshow option and enjoy a cool screensaver with wallpapers. And, you can use other free addon themes along with this Toradora new tab.

Second, the extension provides quick navigation to your most visited sites, Chrome apps like Gmail, or quick reminder with To-Do List right on the Toradora theme. Date, time and weather forecast can also be shown on Toradora new tab if you need.

Finally, you can enjoy all these features (and more will be added on your requests) for free! Our Toradora extension does not include ads or any hidden catch! 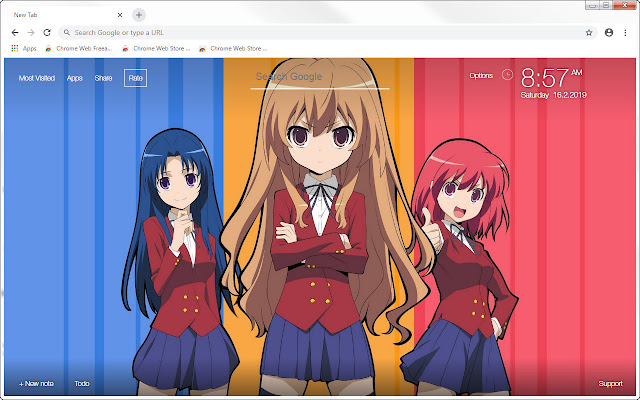 – Toradora! (とらドラ!) is a Japanese light novel series by Yuyuko Takemiya, with illustrations by Yasu. The series includes ten novels released between March 10, 2006 and March 10, 2009, published by ASCII Media Works under their Dengeki Bunko imprint.[3] Three volumes of a spin-off light novel series were also created, aptly titled Toradora Spin-off!. A manga adaptation by Zekkyō started serialization in the September 2007 issue of the shōnen manga magazine Dengeki Comic Gao!, published by MediaWorks. The manga ended serialization in Dengeki Comic Gao! with the March 2008 issue, but continued serialization in ASCII Media Works’ manga magazine Dengeki Daioh with the May 2008 issue.[4] 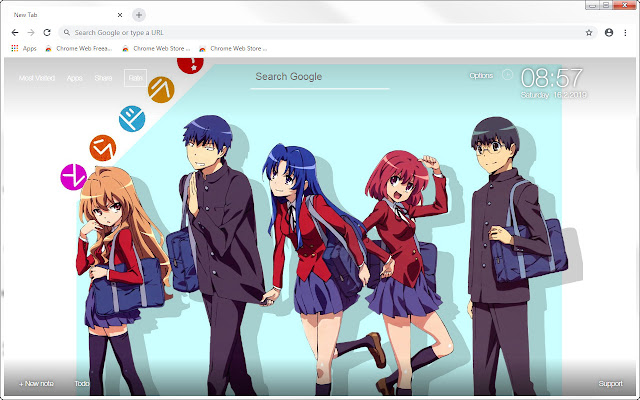 – An Internet radio show was broadcast between September 2008 and May 2009 hosted by Animate TV. A 25-episode anime adaptation produced by J.C.Staff aired in Japan on TV Tokyo between October 2008 and March 2009.[5] A Blu-ray Disc (BD) box set containing an original video animation episode was released on December 21, 2011. NIS America licensed the anime and released it in North America in two half-season DVD collections in July and August 2010, with an English dubbed BD collection to be released in July 2014. A visual novel based on the series was released in April 2009 by Namco Bandai Games for the PlayStation Portable.[6]
– The title Toradora! is derived from the names of the two main characters Taiga Aisaka and Ryūji Takasu. Taiga and tora (とら) are Japanese terms for tiger, while Ryū means dragon. A transcription of the English word dragon into Japanese is doragon (ドラゴン) 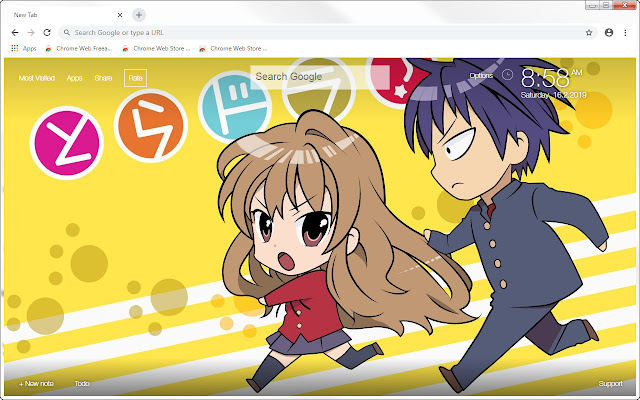