1. Ancient Egypt and the First Assassin

Ancient Egypt is one of the most demanded timelines by fans for years. The land is shrouded with various mysteries, myths and of course, it is exceptionally suitable for historical games such as Assassin’s Creed. Assassin’s Creed Origins brings to Egypt in 49 BCE when Queen Cleopatra ascended the throne and made various groundbreaking changes to the country.

Forget the fancy cities and towns, this year, players will be able to traverse in this enormous, refreshing land of sand. The game features stunning Egyptian structures and buildings, and gorgeous landscapes of Egypt. Of course, players can feel free to travel everywhere in this game without restrictions. Ubisoft has already showed the game map and it is truly surprising to see this monstrous map. According to this giant map, players will get to see nearly entire ancient Egypt from Nile Delta, Alexandria, to Giza and Memphis, and even the far-away desert of Siwa.

According to The Guardian, the team of Ubisoft Montreal has spent years researching about the ancient Egypt, along with the help of Egyptologists and historians. Although the game director – Ashraf Ismail stated that this is not a perfect replica of this sacred land, yet the team has tried to make this as close as possible to the timeline. This also means that players will be able to see various aspects of ancient Egypt, including the society, economy, and especially culture.

*For those who are interested in experiencing ancient Egypt, there will be a new mode called Discovery Tour which will remove all the game story and combat. In this mode, players can freely travel and explore Egyptian culture with guided tours. The mode is expected to be released in 2018 and available for free to all players. 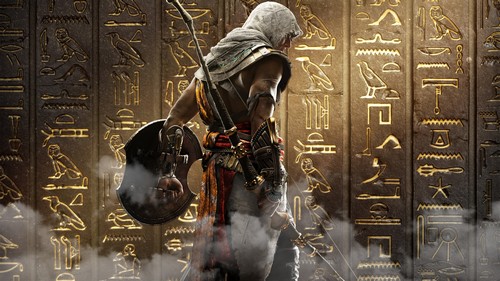 In every new Assassin’s Creed sequel, players are introduced with new protagonist. And in Assassin’s Creed Origins, we get to meet Bayek of Siwa – the last of Medjay, an elite protection force of ancient Egypt.

Originally, Medjay played a vital role in keep peace until the reign of Cleopatra when their role started to be waned. From what we’ve seen so far, Bayek is the last Medjay and he will help Queen Cleopatra protecting Egypt from Roman Empire invasion. Also in the Order of the Ancient trailer, Queen Cleopatra warns Bayek of a hidden Egyptian force which always stay in the shadow called The Order. The Order possesses great power throughout the country and they are corrupting Egypt from the inside.

So far, not much have been known about Bayek, yet one thing we can sure is that he is the first Assassin and the original founder of Assassins Brotherhood. In the game, players will face the obvious enemy which is Roman Empire. However, in Order of the Ancient trailer, we can expect The Order to be another hidden antagonist and high chance that it is the foundation for the Templar Order.

While Assassin’s Creed gameplay isn’t bad, it follows the same formula throughout every single sequel. Unfortunately, this brings a great concern to players since this formula is recycled again, again and again to a point of being somewhat boring. It seems Ubisoft Montreal has put much thought about this issue and they have introduced lots of new changes and tweaks in Assassin’s Creed Origins.

In general, the game is leaning towards RPG side and includes various RPG elements like Skill Tree and Gears. Here’s further details:

Of course as a stealth game, what we always concern about is the game Assassination aspect. Frankly speaking, the assassinate method in this new sequel seems not to be different much from previous games. We still have Eagle Vision, hiding bushes, and the famous Hidden Blade. However, there are few tweaks:

That said; we haven’t been able to see the game’s full potential. Guess we have to be patient and see what the game will fully bring when released.

*Fun fact: Bayek don’t have ring finger on his left hand, implying the old Hidden Blade model which requires users to cut their ring fingers like in the first Assassin’s Creed. 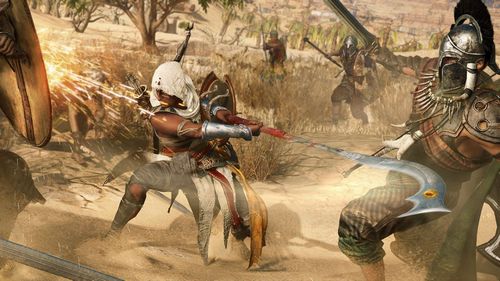 This is when the fun starts. In previous Assassin’s Creed game, the combat is quite simple: players keep mashing attack button and dodge before getting hit. The game automatically lock target and players will surely hit the enemies.

However, in Assassin’s Creed Origins this kind of automatic-aim attack is removed. Instead, players will have a combat system similar to Dark Souls, including light attack, heavy attack, shield block, parrying, and dodging. Of course, it won’t feel exactly like Dark Souls since the game only borrowed the most basic concept. But definitely the combat will feel extremely different since each weapon will have different move set, requiring players to get used to different attack style.

The game also includes a Skill Tree system which divided into 3 branches: Hunter, Warrior, and Seer.

This also means that the game has Level System in which Bayek can level up and gain skill point further upgrade. 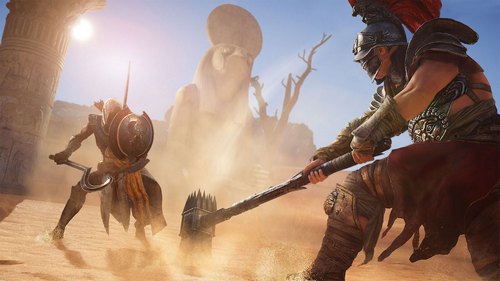 Yes for the first time ever in Assassin’s Creed franchise, we have a Difficulty Setting. According to Ashraf Ismail, the Difficulty Setting will mostly change the enemy’s stats and behaviors. The harder difficulty, the more stats and aggressive enemy will be. He stated that Difficulty Setting’s purpose is to please various player bases. People who only want to enjoy storyline will probably want an easy time with enemies, while people who enjoy challenges will prefer tougher battles.

Implementing Difficulty Setting can also partly solve a major complain in Assassin’s Creed: easy combat. For many players, fighting in Assassin’s Creed is so easy that they can just march through the game without going stealth mode (and of course, this is a fatal flaw for a stealth game). With Difficulty Setting, players will experience much harder combat and eventually it will force players to come up with plans, rather than forcing their way in like Rambo. 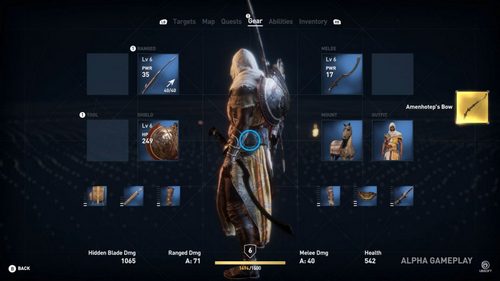 Gear is another important addition to the game. Players can equip: 2 Melee Weapons, 2 Ranged Weapons, 1 Shield, 1 Tool, 1 Mount, 1 Outfit, Pouch Ammo, Quiver Ammo, Poison Dart Ammo, Bracers, and Greaves. Each gear will have Stats, for example weapon’s Speed, Range, Damage, and Rate of Fire. Ashraf Ismail also emphasized that all these Stats absolutely matter and they will greatly affect the players. In addition, gears will provide Perks which give players bonus effects and advantages.

All the gears can be looted from enemies, chests, or buying from Heka Chest. The Heka Chest so far looks similar to Loot Boxes and it is still unknown whether it has micro-transaction or not.

Assassin’s Creed Origins will have a post-release content schedule and constant update. For now, here are free features for all players, and paid features. 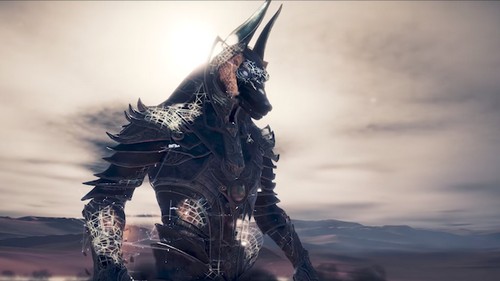 Are you ready to challenge the Egyptian gods? (Source: Internet)

All of these contents will be available right at the release or after few days. The contents listed here are free and available for all Assassin’s Creed Origins players: 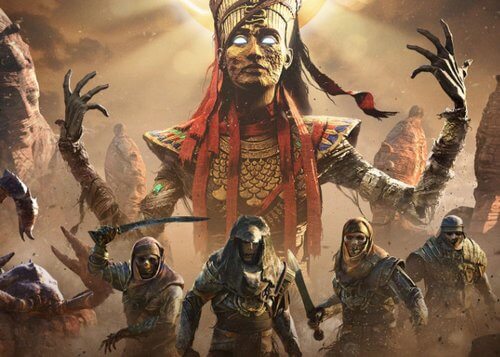 The game features additional paid DLCs and other exclusive in-game items. All of these contents will be included for those who pre-ordered or bought Assassin’s Creed Origins Gold Edition:

And that’s it folk! What do you think about this new Assassin’s Creed sequal?