What happened when a hurricane has maneuver capability? If that is the case, it will push the destruction to the extreme! And that is exactly how we would describe 2018 Lamborghini Huracan Performante – a powerful, ferocious beast with extreme flexibility. Many people have already claimed that this new Huracan Performante of 2018 is definitely a strong “Performance Car of the Year” candidate. So how exactly powerful this new Hurricane is? Let’s find out! 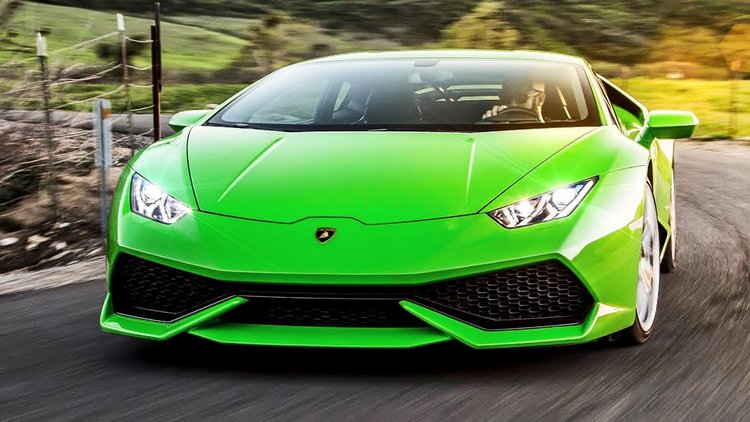 Back to 2003, the very first Lamborghini Gallardo was presented to the world with its incredible V-10 engine. And since then, the Gallardo walked a long way to steal the hearts of every Lamborghini enthusiasts (well, even the police force prefers using Gallardo for patrol). But, even the great bull himself cannot keep up with the pressure of time. And so, Lamborghini Automobili had to come up with a new successor, worthy the legacy of Gallardo. Eventually what came out of such effort was the exceptional 2014 Lamborghini Huracan. 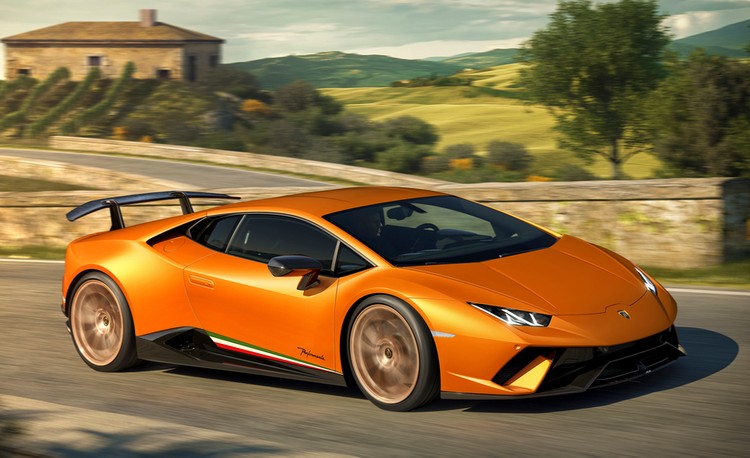 The name “Huracán” means “hurricane” in Spanish, not only that, it is also the name of a Spanish fighting bull (Lamborghini’s naming tradition as always). And true to its name and its inherited legacy, this beast was a tremendous blast. Top Gear even put it as the “Supercar of the Year” in 2014, which pretty much tells us how huge this 2014 Lamborghini Huracan is. But of course, the development for Huracan does not stop there. As we know, Lamborghini also developed its track-oriented variant called Huracan Performante, along with it is the new active aerodynamic system named Aerodinamica Lamborghini Attiva (ALA). So together, what is the final result of 2018 Lamborghini Huracan Performante? Tremendous! It is recorded that the car has broken the Nurburging production-car record within 6:52:01, which is 5 seconds faster than the Porsche 918 Spyder. For such an “impressive opening”, it would be a waste if we miss this new hurricane. And with no further ado, it’s time to check out this new 2018 Lamborghini Huracan Performante! 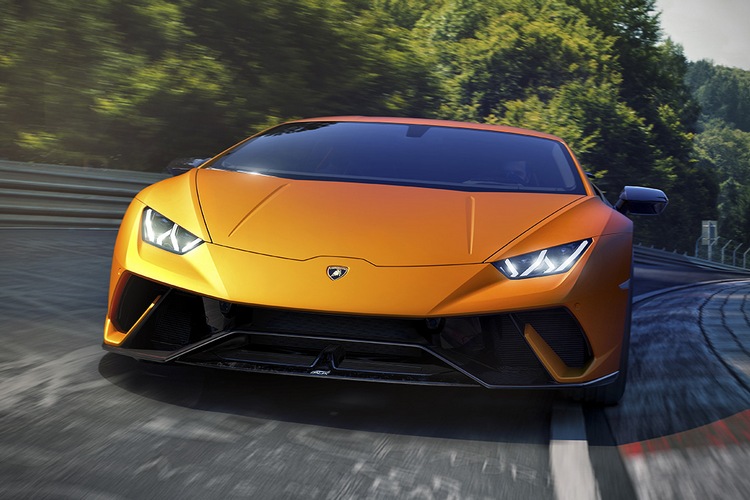 In terms of appearance, 2018 Lamborghini Huracan Performante still maintains the original shape from the Huracan, but with more focused and aggressive styling. The overall shape may look quite simple to certain extent; however, don’t let such “simplicity” fools you since there are much more things going on here than what we initially imagine.

As we can guess from its name, the Huracan Performante does not only focus on lightweight. It’s also about performance. So in terms of weight, the car is crafted with forged carbon (or as Lamborghini likes to call it: Forged Composites), giving it a dry weight of 3,047 pounds (or about 1,382 kg) which is 88 pounds lighter than the original Huracan. Lightweight indeed, but as we said: the car also focuses heavily on performance. Here’s why the Huracan Performante’s exterior does not look simple as it seems. 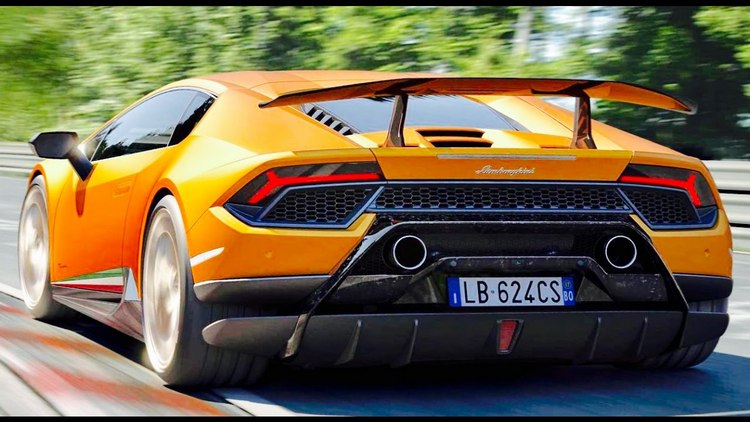 There is a great level of aerodynamic details here. In the front bumper there is an electronic flap which will direct the airflow upfront to the underneath and the roof. Then from the roof, the airflow gets to the air ducts on the engine bonnet which will give the engine a good cooling. And finally, the airflow will be directed inside the rear wing (literally) and get out through its slits. All of this is part of the ALA system. In most basic sense, it helps reducing downforce and drag. However, we will get into this deeper in later section. 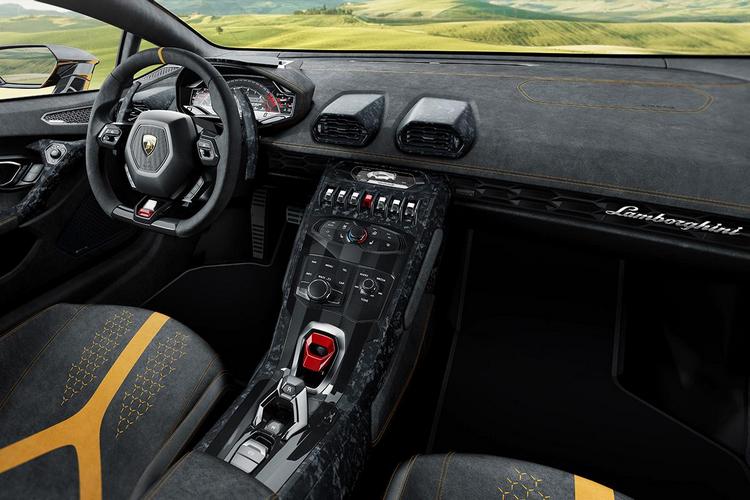 To ensure the lightweight for 2018 Lamborghini Huracan Performante, many small details on this car were also changed. Right off the bat, we have a slightly different opening mechanic for Lamborghini Huracan Performante (and simple at that). All we need is to push the bar so that we can grab the handle and easily pull the door. Inside the car we have quite a comfortable interior space for both driver and passenger seat. Everything is built with the combination of carbon-fibre and Alcantara. And just like every Lamborghinis, here we have an interior design filled with triangle and hexagonal stylings. The visual is actually great with minimum vision block. To the back we can see the engine bay situated behind on the rear. 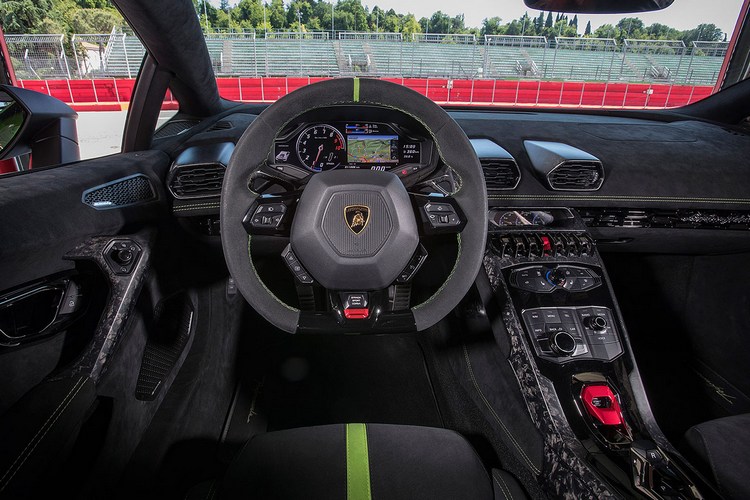 For the display, we only have a single digital screen placed in front of the steering wheel. Here we have all the info we need. From the steering wheel we can shift between 3 modes: Strada – Sport – Corsa. In Strada mode, we can go to the full screen and access to different options like Navigation/Map or Music. In Corsa mode on the other hand, the display will solely focus on the driving (since it is also the mode’s purpose) and therefore, drivers won’t be able to select options like in Strada or Sport mode.

Overall, the interior of 2018 Lamborghini Huracan Performante is quite efficient. However, the biggest complaint is its too-firm seats and too-solid buckets. As the results, sitting inside the Huracan Performante does not feel comfortable as we want to. Fortunately, if we embrace this new Lamborghini experience, we will still be able to fully enjoy this wild ride. 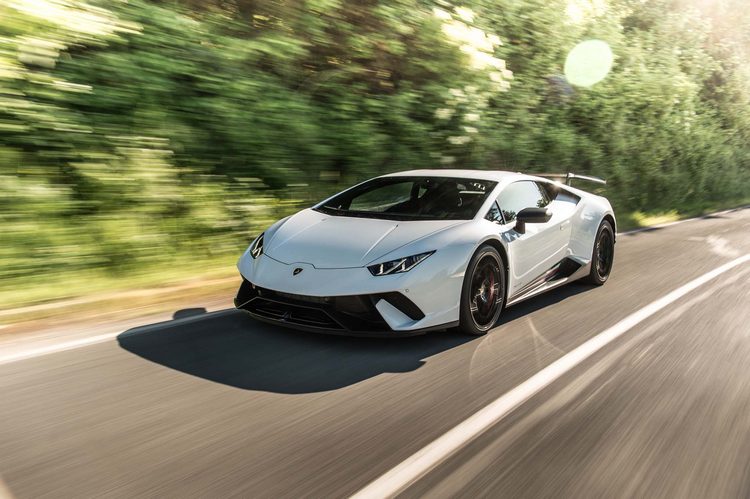 As mentioned many times, 2018 Lamborghini Huracan Performante is the track-focused variant of the original Huracan. So naturally, many of us will want to know how fast this new beast is exactly.

For the engine, we have 5.2-litre naturally aspirated V-10 engine which can unleash 631 horsepower and 443 lb-ft of torque. In case you have noticed, yes Lamborghini Automobili has pushed this engine to the limit with a number of enhancements, including new intake manifold, lighter exhaust system, and new titanium valves. The result is an even more powerful V-10 engine, giving it 30 extra horsepower. Combining with the smooth and seamless the 7-speed LDF dual-clutch transmission, in Corsa mode this vicious hurricane can hit from 0 to 60 mph within 2.3 sec, or 0 to 124 mph within 8.9 sec. That’s really insane! It feels insanely fast and unforgiving. Although the given information said that the car can reach the top speed of 202 mph, we still feel like wanting to see how far this beast can truly be.

Not only that, the Huracan Performante sounds incredibly satisfying especially in Corsa mode, thanks to the naturally aspirated engine. With such wild speed and incredibly sound, we quickly become addicted to its crazy experience. Forgetting everything! The one and only important thing is to become one with the hurricane! 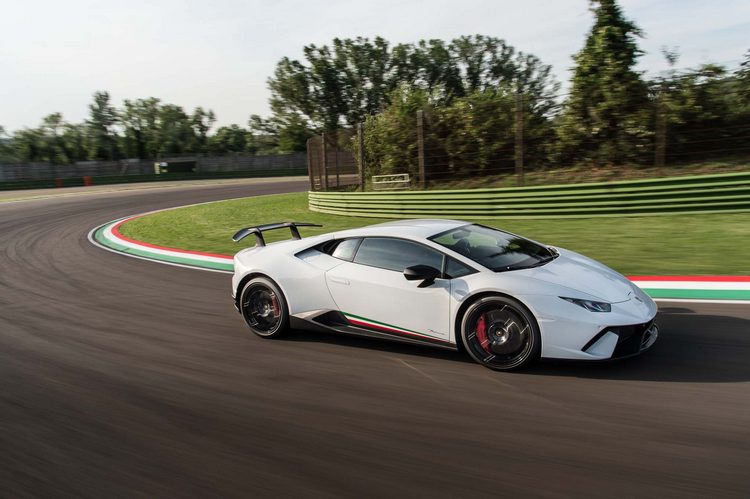 Of course, engine is not the only enhanced element of 2018 Lamborghini Huracan Performante. Frankly speaking, everything within this car is put one step further: quicker transmission, all-wheel-drive system with better power, stiffer springs and roll bar… The exterior design of Huracan Performante also contributes a lot in enhancing the experience including lightweight build. All of these enhancements make the Huracan Performante stays true to its name: incredible performance of both speed and handling. And talking about handling, the true power of Huracan Performante actually lies within its active aerodynamic system, or just as Lamborghini Automobili likes to call it: Aerodinamica Lamborghini Attiva (ALA). 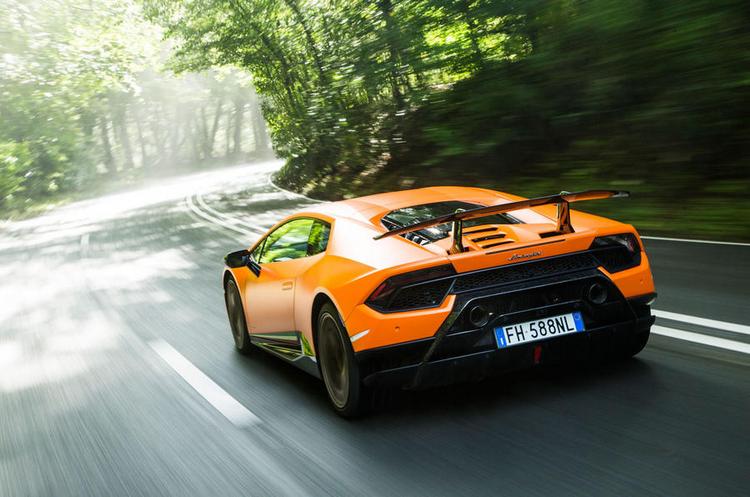 Essentially, this ALA system includes the Forged Composite front bumper with the special electronic flaps. When there is too much drag, the flaps will open and reduce the downforce and also the drag. As the airflow comes from the upfront bumper, it will be led to the underneath and the roof, then to the air ducts located on the engine bonnet, giving the engine a nice cooling. After that, the airflow will continue to the inner channels of the rear wing and get out from the wing’s slits. When the flaps closed, the rear wing acts as spoiler which provides vertical downforce. And when the flaps opened, the air will be channeled underneath the wing, ultimately giving more acceleration while reducing drag. 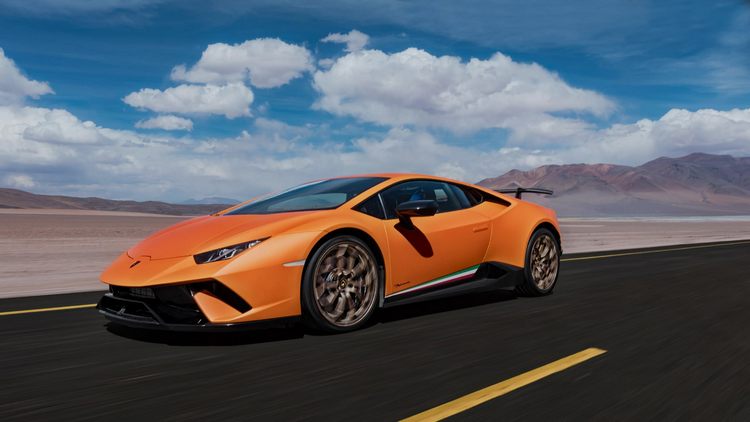 If we look at how it works, we will see that this is truly a genius design. Nowadays, we can see a number of sports cars, supercars using moving rear wing which works especially for air brake. While this moving rear wing is also a great element by itself, it has 3 huge issues: First, the hydraulic fluid need to keep the wing afloat is heavy despite the lightweight wing. Second, the hydraulic wing needs 1 second in order to fully deploy. And third, even when it fully deployed, it only works for the rear while the front still becomes light, eventually leading to understeer. Interestingly enough, this ALA system actually deals with all these 3 issues. It is quick since the flaps only take 0.2 second to open and close. It has lightweight since the entire system is made of carbon-fibre (which also helps in reducing weight for the entire car). And it keeps about the same weight since it works both front and rear.

The final result is an ultimate active-aerodynamic and performance system which helps the car move even faster, brake even harder, and turn even better. For example, when steering right, the car remains downforce on the inside wheel while no force on the outside wheel. This leads to more rotate while requires less steering and eventually moves quicker. When combining with all other enhancements, driving this awesome beast feels like miracle. We never feel afraid when riding it, and on the contrary, it makes us feel incredibly confident while blasting the track. 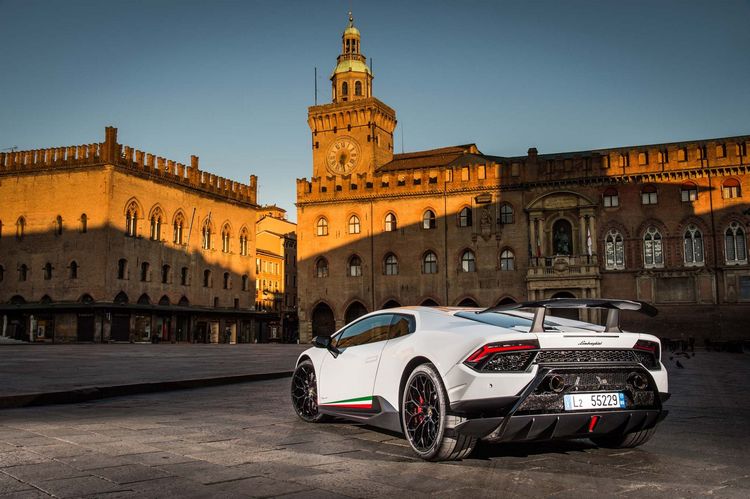 What do you think about 2018 Lamborghini Huracan Performante? (Source: Internet)

Overall, 2018 Lamborghini Huracan Performante is truly a special ride. Not only it looks good as always, it hits the road extremely fast while still able to provide exceptional performance. The shining point is the Aerodinamica Lamborghini Attiva (ALA) system which really nails the incredible driving experience. At the base price of $279,185, it is a heavy contender to McLaren 720S (base price: $288,845). It will definitely be a hard choice between the two but if you’re Lamborghini enthusiast, it’s hard to ignore this monster.

And that’s it folks! What do you think about 2018 Lamborghini Huracan Performante? Feel free to share with us and for now, thank you and stay tune for more news in the future!

One thought on “2018 Lamborghini Huracan Performante Review: Unleashing The Storm!”