League of Legends patch 7.17 has released for a while now, featuring the newest champion: Ornn, the Fire Below the Mountain. Based on what we’ve seen from the spotlight, Ornn has quite an interesting passive, along with a fiery set of skills. However, it seems his first performance after release wasn’t as good as what people expect him to be. With only about 35% win rate, many people have been doubted about Ornn to be good in any team. Therefore, it seems now is the good time to re-evaluate Ornn, is he truly good? Or he needs future update to be truly useful? Let’s find out! 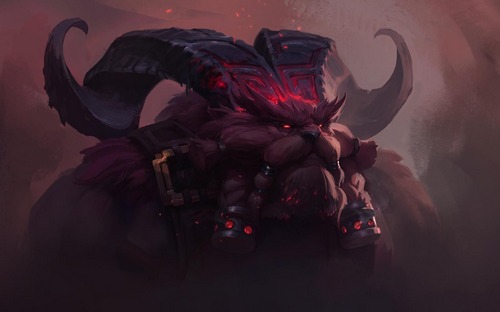 Ornn, the Fire Below the Mountain (Source: Internet)

So before jumping into analysis, let’s recap what we’ve known about Ornn so far: 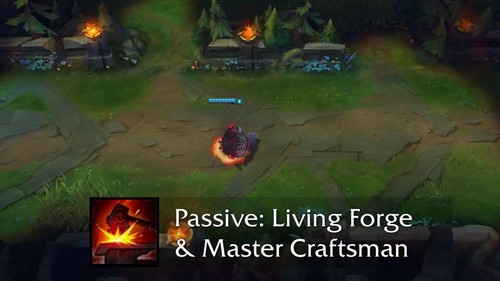 This is probably the most interesting aspect of Ornn: his passive. Living Forge has three unique aspects: Firstly, it allows Ornn to buy any non-consumable item from anywhere without needing to back to base. It takes 4 seconds for Ornn to “craft” an item. And if he enters combat, the forging will be interrupted. Crafting an item will caused 300s Cooldown to Living Forge.

Second, Living Forge allows Ornn and his team to buy Masterwork upgrades for several items, including:

And lastly, Living Forge adds a new effect: Brittle, which can only be activated by Ornn’s Bellow Breath and Call of the Forge God ability. Brittle is a debuff which lasts 6 seconds and can be stacked up to 2 times. When applied on the target, Brittle will decrease target’s Tenacity by 30% (60% with 2 stacks). Also, it causes the next immobilizing effect to deal 7% of target’s Max HP (16% at max level) per mark, thus consuming all marks. This bonus damage also applies with Ornn’s basic attack and also knocks them back.

Ornn sends a fissure to the target direction which stops early after hitting a champion. It deals physical damage and slows enemies hit for 2 seconds. A magma pillar will erupt at maximum range after 1.125-second delay and stay as impassible terrain for 4 seconds. Enemies stand at the eruption will be knocked aside. 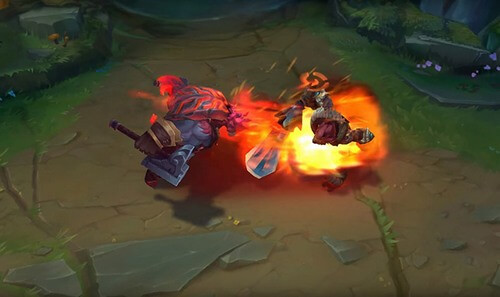 Ornn gains a 12%-of-maximum-health shield for 2.5 seconds and move unstoppably toward target direction with 50% decreased movement speed over next 0.75 seconds. While moving he unleashes fire breath over a cone before him, which deals magic damage every 0.15 seconds to enemies hit. Brittle will be applied at the final fire. 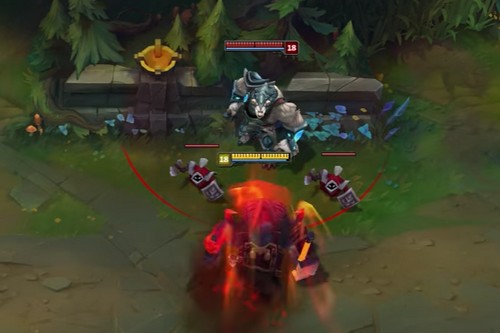 R – Call of the Forge God 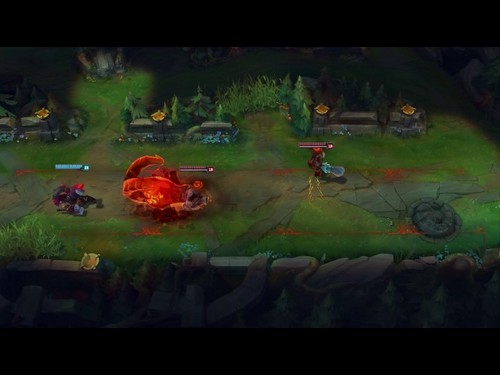 Ornn calls a fiery elemental at max range in the target direction which stampedes toward him. The elemental deals magic damage and slow enemies hit by 40% for 2 seconds.

During the stampede, Ornn can cast this skill a second time which dashes him ahead. If he collides with the elemental, he will head-butt it and send it stampeding again. This time, enemies hit by the elemental will be knocked up.

This skill can deal damage to enemies twice. 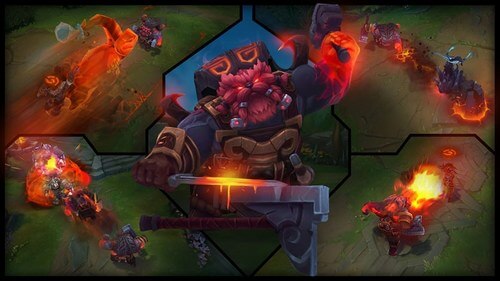 Ornn – How good is he now? (Source: Riot Games)

On the other hand, all of Ornn’s abilities are skill based. Therefore, if his skill is missed then Ornn will be pretty much useless, especially in case of his R ability. To some extent we can say Ornn isn’t a beginner friendly champion. Playing Ornn is definitely not child-play and it requires time to master (which can partly explain why his win rate is low currently).

In addition, Ornn’s overall stats are not impressive, especially his Mana Regen. While Ornn’s abilities cost tons of Mana, his “disastrous” Mana Regen prevents Ornn from casting skills freely. And so players have to consider using Ornn’s abilities carefully and precisely as he can run out of his Mana extremely fast. In case of top lane, Ornn’s low Mana Regen can make things become harder for him to manage, especially when facing popular top-lane champions like Darius or Gnar.

That being said, since Ornn is indeed not an easy champion, it requires time for people to master him. Therefore, judging him at this moment can’t be fully accurate. It seems time will answer for our question. Still, at the moment there are several good players have claimed that Ornn is good, if not, “overpowered”. And in fact, they actually have made pretty good plays. We recommend checking out SoloRenektonOnly or Nightblue3.

3. What is the Best Way to play Ornn? 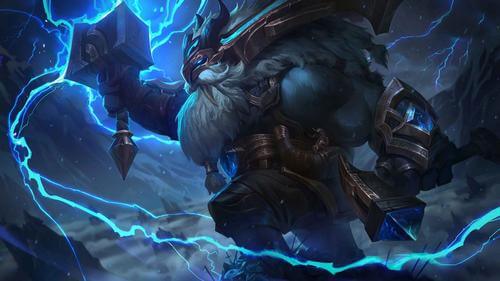 During the first few days, people expect Ornn to be an all-rounder champion. People have been trying him on top lane, jungle, and support role. According to Champion.gg, it seems top lane role achieves the highest success rate of 36.71% at the moment. Jungle Ornn also has fairly close win rate with 36.23%, and the lowest win rate belongs to Support Ornn with 33.13%. So for now, we can temporary say the best way to try Ornn is top lane role. So let’s us see some suggested tips when playing Ornn on top lane.

*Note: All of the tips here are based on personal experience and borrowed from other guides. Therefore the addressed tips here are subjected to change in the future.

The most popular choice of ability sequence currently is picking up all three skills at the first 3 levels. Afterwards, maxing out Call of the Forge God and Bellow Breath is the top priority. Call of the Forge God is undoubtedly necessary for crowd control and team combat. However, this skill needs to be carried out precisely or things can be pretty messed up for our team. Bellow Breath is extremely good in staying lane and dealing damage. With auto-attack Brittle, Bellow Breath can be extremely devastating for those who are unaware. When Bellow Breath maxed, it’s time to max Volcanic Rupture, then finally Searing Charge.

Volcanic Rupture is not a bad damage dealing ability; however, its eruption delay makes this ability not really reliable. Meanwhile Bellow Breath is more reliable and therefore Bellow Breath should be more prioritized. On the other hand, Searing Charge is a good crowd control ability but it requires terrain to actually knock enemies. In this case, other abilities are generally more reliable and should be prioritized before Searing Charge.

There are still several debates over mastery choices for Ornn. In overall, we can agree that the Resolve is the best-suit Mastery tree for him. In term of last Resolve choice, we have Stoneborn Pact and Grasp of the Undying. Grasp of the Undying is generally for more aggressive play, while Stoneborn Pact is good for healing ally. Currently it’s hard to say which one is the most suitable since it depends on different team components.

In the current state, Flash and Teleport are the most recommended.

For early game, Doran’s Shield and Health Potion are always suggested. For the most part, Sunfire Cape seems to be an all-rounder choice of most players. Next is Abyssal Mask which gives decent chunk of magic resistance for Ornn, and also help dealing with Ornn’s Mana problem. After these two items, other items are mostly by choice. Depending on different situation, we will need different gears. But in general, we will want to get tanky items with high armor, health, and magic resistance.

Some players are testing Iceborn Gauntlet which seems to be a fitting item for Ornn. Iceborn Gauntlet gives Ornn 65 Armor, 20% Cooldown Reduction, 500 Mana (which is always great), and especially its Unique slow passive which is fitting for Ornn’s Brittle.

In general, we can say Riot took quite an interesting approach with this new champion Ornn. His passive ability and his new Brittle effect are extremely great for crowd control and team fight. However, with a low win rate of about 35%, many players consider him to be lackluster. That said, it’s difficult to rate Ornn 100% since this is still the beginning. Also, Ornn requires time to master and therefore, let’s wait and see Ornn will prove his worth in the future.

And for now, thank you and stay tune for more news in the future!

One thought on “League of Legends Champion Ornn: How Good Is He Now?”