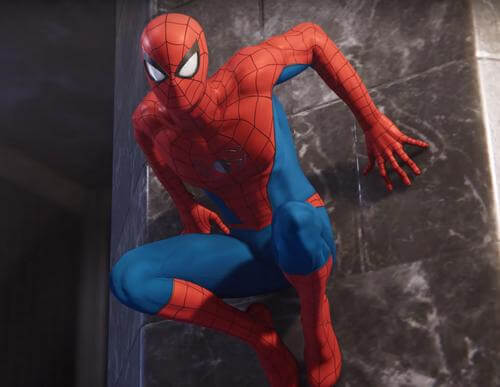 Classic Suit is Spidey’s traditional suit (of course) which first appeared in Amazing Fantasy #15 (1962). Player will stick with this suit at the beginning of the game until it was damaged after the fight with Kingpin: 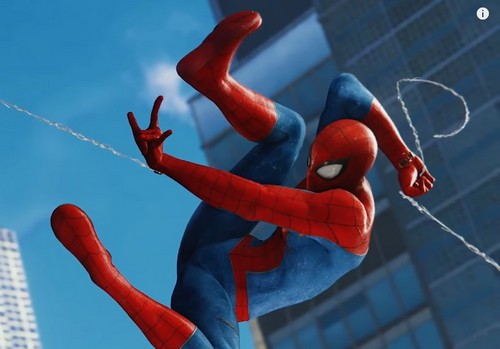 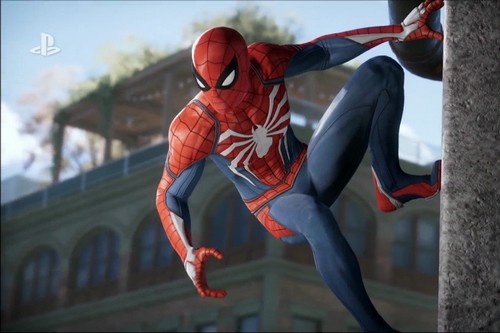 The signature Spider Man suit of the game (Source: Internet)

The Advanced Suit is the exclusive Spider Man suit for Marvel Spider Man PS4 and supposedly the main Spider Man suit for the game. It takes the Classic Suit as the base design and gives it more athletic touches. The suit is available to unlock from the 5th main story mission Something Old, Something New. It also unlocks Battle Focus Suit Power. 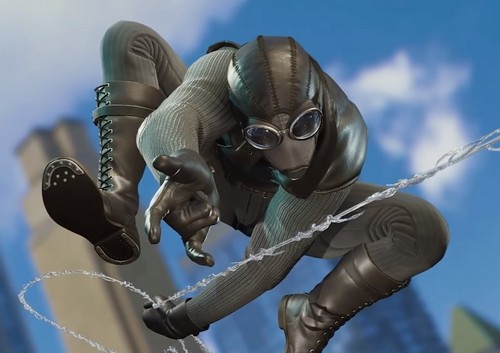 Are you ready for some stealth actions? (Source: Internet)

This cool-looking, espionage suit was first introduced in Spider Man Noir series in 1933 (the Great Depression period), which is a part of the “Marvel Noir” universe. In the comics, the suit was made from WW1 uniform owned by Spidey’s uncle. The suit also got enhanced with kevlar to withstand bullets, and it even included a pistol (though players cannot use it in game). The suit is available to unlock after completing 5th main story mission Something Old, Something New and it provides Sound of Silence Suit Power. 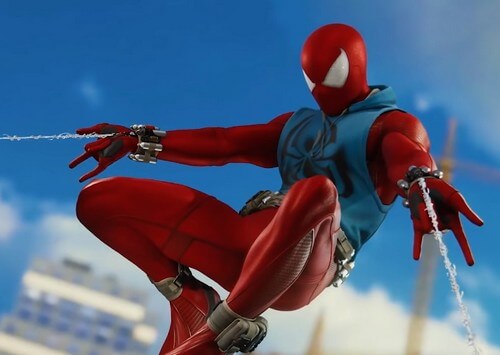 The origin of Scarlet Spider Suit is rather complicated. But in short, Scarlet Spider is a Spider Man clone named Ben Reilly which was first introduced in Web of Spider-Man #118 (1994). Later on this suit was worn by a number of people including Joe Wade, Kaine, and Peter Parker himself. In Marvel Spider Man PS4, the suit is available to unlock when players reach Level 4 and it provides Holo Decoy Suit Power. 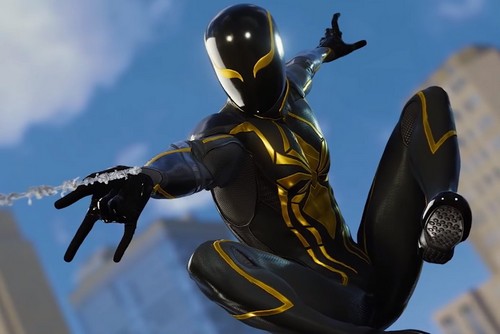 In Amazing Spider-Man #656 (1999), Peter Parker lost his Spider Sense and therefore, he had to seek alternatives to deal with the situation. And so, the Spider Armor MK II was built to compensate Spidey’s lack of Spider Sense. It features bulletproof armor and magnetic webbing. When his sense finally returned, this suit was also put into retirement. In Marvel Spider Man PS4, the suit provides Bullet Proof Suit Power which has similar ability just like in the comic. 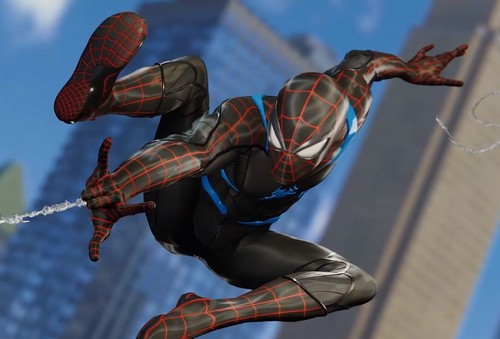 Just as its name implies, Secret War Suit was specifically designed for the Secret War Arc in 2004, involving Spider Man, older Nick Fury, and other Marvel heroes trying to overthrow Dr. Doom in Latveria. Unfortunately the suit is nowhere to be seen until now in Marvel Spider Man PS4. In game, the suit also comes along with Arms Race Suit Power. 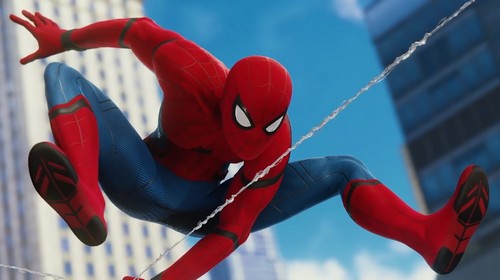 Anyone who have seen Captain America Civil War 2016 and Spider Man Homecoming 2017 movie will definitely recognize this suit by now. The Stark Suit was built by Tony Stark himself with certain changes like the retractable and expandable eyes. In the game, it provides an extremely powerful Suit Power called Spider-Bro. 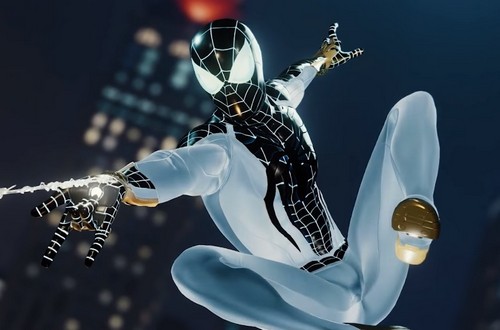 This cool-looking black and white suit was not made by Mister Negative (though it may look like it) but rather, during Spider Man’s visit to the Negative Zone. That said; there are also stories which say that Spidey’s suit was transformed when he fought with Mister Negative. In game, this suit provides Negative Shockwave Suit Power. 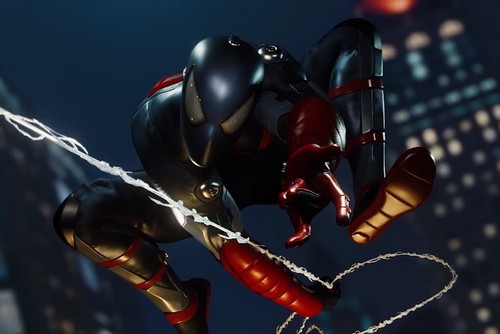 The suit was first introduced in the Amazing Spider-Man #425 (1997). It also known as Electro-Proof Suit since Spiderman built it specifically to fight against Electro. Despite his frequent clashing with Electro, the suit has not been used later on since Peter has better, upgraded suits. Luckily though, the suit has chance to appear again in Marvel Spider Man PS4 and it provides Electric Punch Suit Power. 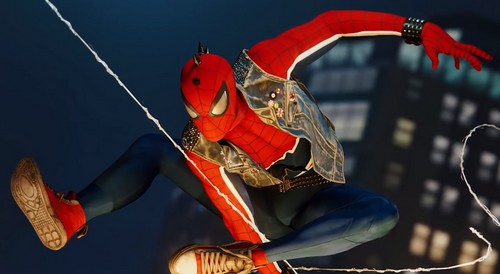 The origin of this suit is quite interesting. It was worn by Hobie Brown, an alternative Spider Man of Earth-138. He led the Spider Army against the tyrannical President Osborn and guess what, he uses both the power of Spider Man (as we already know) and the power of rock! This rock-music power was transferred pretty well into the game as it unlocks Rock Out Suit Power. 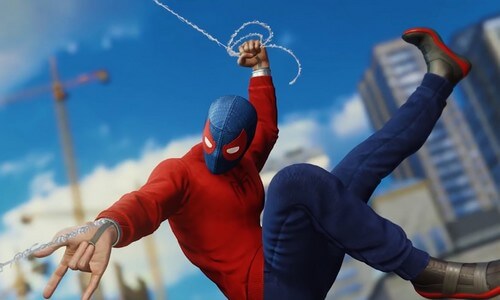 Originated from Ultimate Spider-Man #3 (2000), this suit was first used by teenage Spidey when he trying to figure out his power. It also appeared in 2002 Spider Man movie directed by Sam Raimi, featuring Tobey Maguire’s version of Peter Parker/Spider Man as Spidey used his power to enter a wrestling match for money… only to learn that “great power comes with great responsibility”. In game, it also unlocks a Suit Power with wrestling ability called as The King of the Ring. 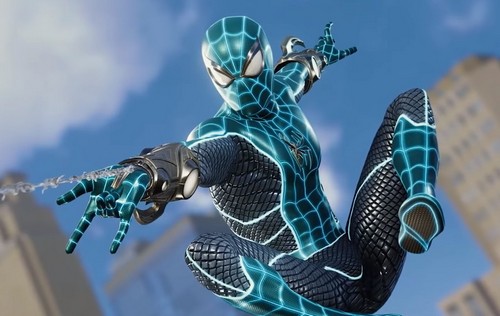 The Fear Itself Suit came from the 2010 Fear Itself event, featuring several Marvel heroes who got new costumes built by Tony Stark and the dwarves of Nidavellir. In Peter’s case, he got this suit which made from Uru metal – the same material which forged Thor’s Mjolnir. It also has 2 gauntlets which can shoot blades from both arms. Sadly, Odin ordered this suit to be destroyed so fans were not able to see it in action… until now! One different though, in the game this suit does not provide blade-shooting ability but rather, a Suit Power called Quad Damage. 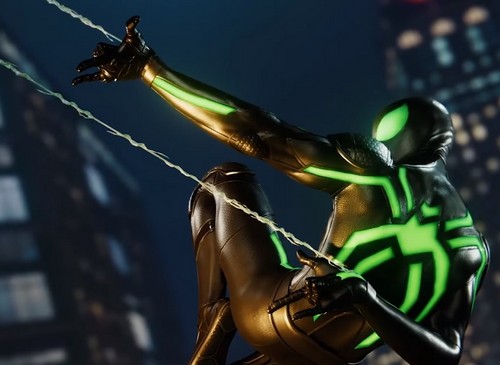 Can I take this suit out for a heist? (Source: Internet)

Aside from espionage-specialized Noir Suit, Peter also had another suit in store: the Stealth Suit, introduced in Big Time Arc in Amazing Spider-Man #650 (1999). This suit was built specifically for stealth action in order to counter Hobgoblin’s sonic screams. To be more specific, it uses wave-bending technology to warp both light and sound, rendering Spiderman completely invisible. This power also gets translated nicely in Marvel Spider Man PS4 with Blue Projector Suit Power. 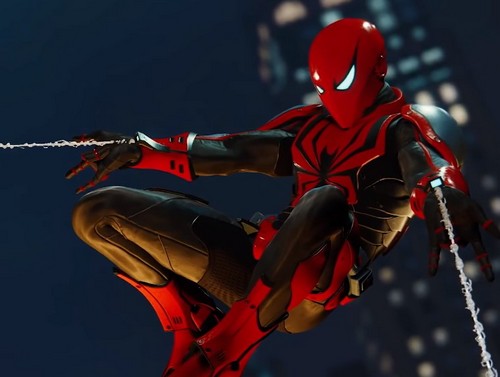 This Red-Hood, heavy-looking armor was designed by Peter Parker during his time in Horizon Lab in Amazing Spider-Man #682 (1999). In the comics, this suit is exceptionally powerful due to the fact that it was built to counter every single member of Sinister Six, like Electro-Proof property or advanced hearing device to detect Chameleon’s heartbeat. However, in the game this suit provides only one Suit Power which is Titanium Alloy Plates. 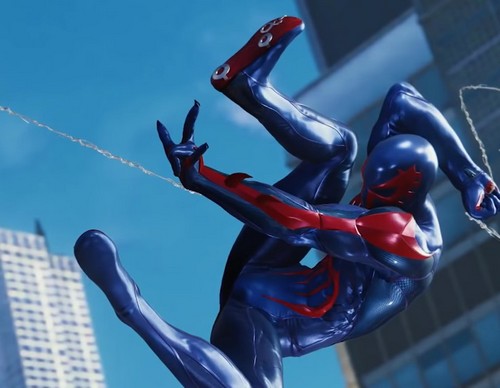 Hmm… it is not really a “black suit”. (Source: Internet)

This suit is worn by Miguel O’Hara – Spider Man of 2099. Despite the name “Black Suit”, it has the tone of dark blue, rather than pure black. It also has distinct styling than Peter’s suits, featuring skull-like design. In game, it features the Low Gravity Suit Power. 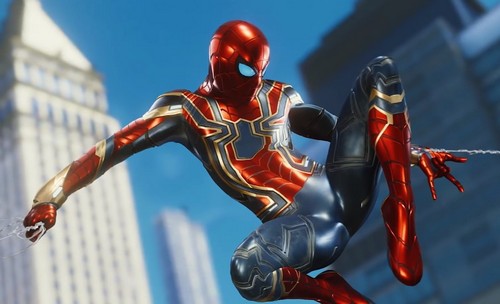 For the Infinity War! (Source: Internet)

This awesome suit is definitely the goal of many players. The Iron Spider Suit was originally made by Tony Stark, which made appearance in the bombastic movie Avengers Infinity War. The best part? It got both the look, AND, the four cool-looking spider arm power called Iron Arms on his back. 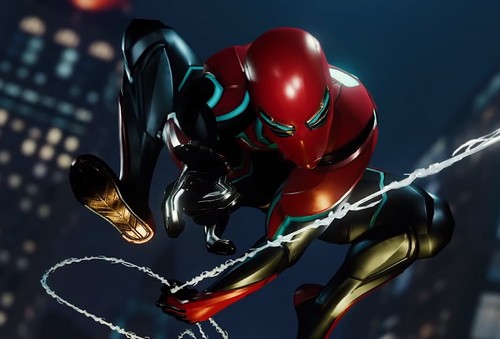 This fantastically-looking suit was actually designed exclusively for Marvel Spider Man PS4 by the famous artist/designer Adi Granov who has previously worked with Marvel in the past. The suit has distinct eye design and especially that sweet glowing blue lines and spider mark. Interesting enough, this suit does not provide any Suit Power. Instead, it passively increases Spidey’s movement speed. 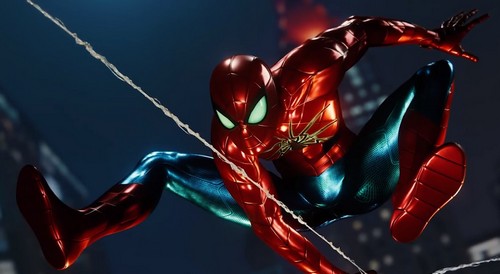 Unlike the previous Spider Armor MK III, this fourth Spider Armor MK IV was made to be much sleeker, more elegant, featuring glowing spider mark. The suit was built by Peter when he controlled Parker Industries and traveled around the world. It also got a variety of technological upgrades like tracking HUD. Unfortunately, this suit was later destroyed by Superior Octopus. In game, this suit provides an ultimate defense Suit Power called Defense Shield. 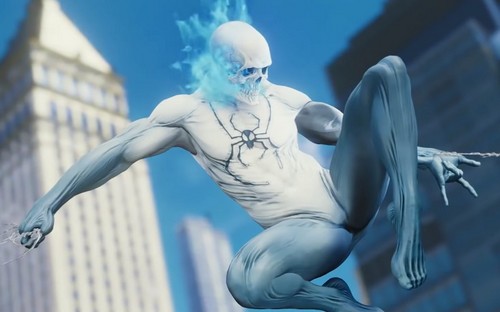 This one is definitely among the top 10 most badass Spider Man suits in this game. Its appearance looks so badass with the white skin and black spider, and especially that blue-flaming skull. In the comic version, this “suit” was actually belonged to an alternative Peter Parker of Earth-11638. In this alternative Earth, Peter’s Uncle Ben did not die and instead, trained Peter to master his power. Eventually, Peter became a superhero called Amazing Spider. However, later on Amazing Spider used a dimensional portal to summon Spider Men from other worlds, only to absorb their power. In the end, Amazing Spider Man’s plan was stopped by Peter Parker of Prime Earth-616. He was defeated, and his soul was sent to Hell until Bruce Banner – the Sorcerer Supreme of Earth-11638 gave him a second chance, thus, Amazing Spider was reborn as Spirit Spider (or as he likes to call himself: Ghost Spider). 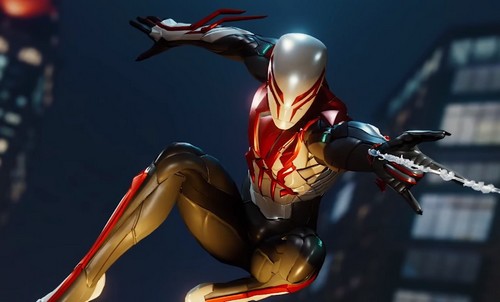 This is futuristic Spider Suit was another suit worn by Miguel O’Hara – Spider Man of 2099. Miguel got this suit when he joined Parker Industries; in fact, it was personally designed by Peter Parker and included various perks. In game, it provides a powerful Suit Power called Concussion Strike. 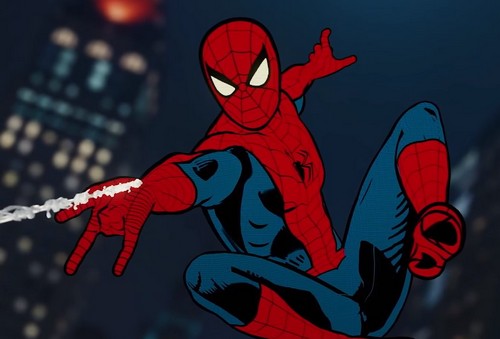 This is really funny (and cool-looking too) suit coming straight out from comic books. Aside from its comic-like appearance (which is hilarious given the realistic depiction in game), the suit also comes with a funny Suit Power called Quips. 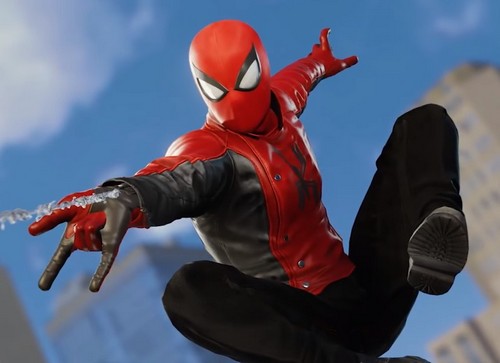 The story coming with the Last Stand Suit is not a happy one. It belonged to Peter Parker of Earth-312500 and in this world, he killed Kraven the Hunter. After that incident, Peter – Spiderman took on a darker, murderous vigilante approach until he was cornered by the NYPD. Even in this state, he still refused to give up or atone for his sins, yet only to be shot down right in front of Aunt May’s grave. 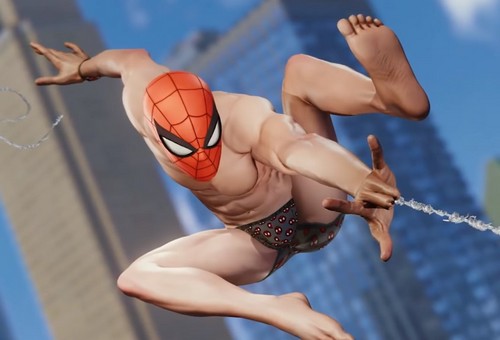 Is he wearing a Deadpool undies? (Source: Internet)

As if the Quips Suit Power from Vintage Comic Book Suit is insulting towards enemy enough, here Spidey even has this… Undies Suit (which is not really a “suit” to be honest). Basically he does not wear anything, except for his Spider Man mask and his… undies. But (here’s the big one), it provides an extremely powerful double-edge Suit Power called Equalizer. But beware, unlocking this Suit is not a simple matter. 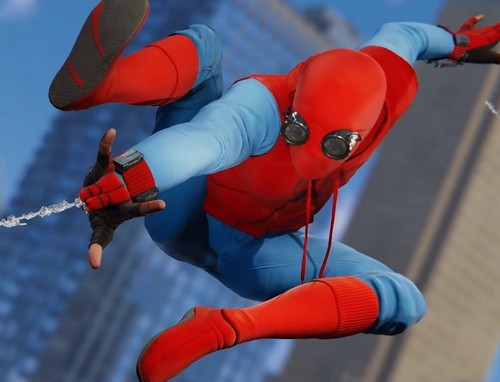 A memento of the past (Source: Internet)

This suit calls back the good ol’ day when Peter was still practicing his Spider Man abilities. It does not have any special property but at the very least, it is a nice memento of the past. 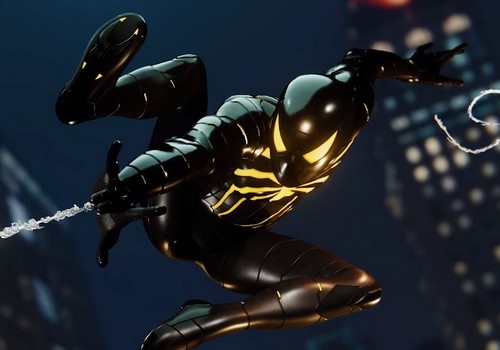 This is another exclusive suit to Marvel Spider Man PS4. This black and yellow suit is specifically built to fight against Doctor Octopus. After that battle, players can keep it for future uses. Coming along with it is the 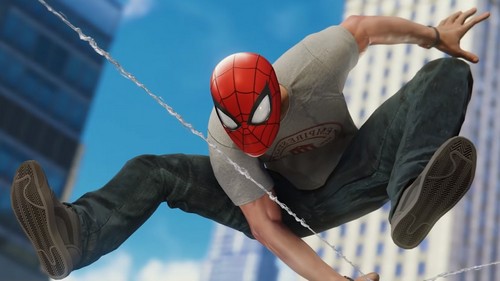 The ESU Suit (or as we would like to call it: “Paparazi Suit”) is a fun suit including an Empire State University T-shirt, a pairs of jean, and the Spider Man mask. Other than that, it does not have any special power. 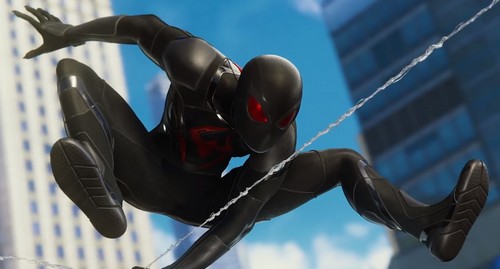 The Dark Suit is a black Spider Man suit with red eyes and spider mark. It does resemble symbiote suit and Miles Morales’ Spider-Man suit to certain extent. In Spider-Man/Deadpool #8 (2016), Spider Man is also seen wearing this suit briefly when Deadpool rescued him from the Purgatory. That being said, this suit does not have any special ability. But at the very least, this suit will be a great match for the upcoming The City That Never Sleeps DLC which includes Black Cat.

And that’s it folks! Which one(s) among Marvel Spider Man PS4 All Suits is your most favorite? Feel free to share with us and for now, thank you and stay tune for more news in the future!