Overwatch is undeniably one of the most popular team-based shooter online games to date. The game has received lots of positive ratings from both casual and experienced FPS gamers. Many new players are still coming to Overwatch. Yet coming to the game around this time can be imposing since there have been lots of things going on since Overwatch’s first release. But no worry! If you are also new comers, this Overwatch beginner guide will be of great help for you. So with no further ado, let’s get on to our guide to Overwatch for beginner!

Table of Content:
1. What is Overwatch?
2. What to expect?
Game Modes
Controls
Leveling and Rewards
3. Choose your character!
4. Suggested Overwatch Tips and Tricks 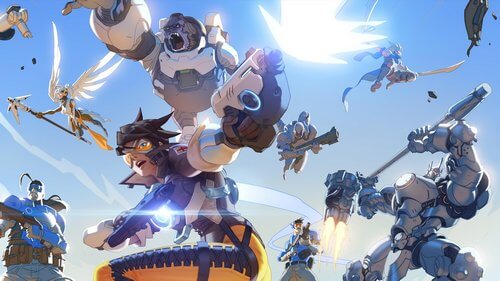 Are you ready to join battles of Overwatch? (Source: Internet)

As mentioned, Overwatch is a team-based shooter online games in which two teams will be put on an arena and fight for their objectives. The game features various maps with different game objectives. Therefore, the aim of each team isn’t getting most kills, but rather, trying to complete their objectives.

To join the fray, each player gets to choose a character among the roster of 25 Overwatch heroes (though some characters are not exactly “heroes”). Each Overwatch character possesses unique abilities and playstyle. It will require time for players to master each of these heroes, while some characters can be more difficult to learn than the others.

Currently, Overwatch is available on PC, Playstation 4, and Xbox One. 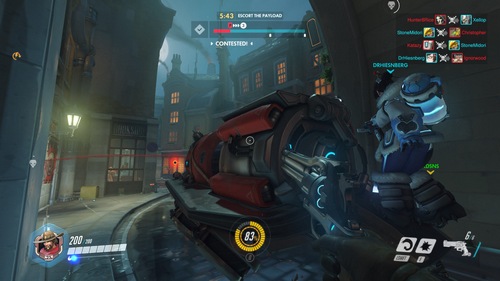 Since Overwatch focuses on objectives, each of Overwatch’s maps has a particular objective. In overall, there are 4 objective types:

Players can join the game in form of Quick Play or Competitive. Quick Play is the normal game mode where players get matched with random team. Supposedly, this will be the mode players spend most time with until they can get to level 25.

At level 25, players unlock Competitive mode featuring seasons, each lasts a few months. Playing in Competitive will give players rank and the rank will change depending on players win – loss record. Players who have higher rank will gain better rewards, especially when the season ends. 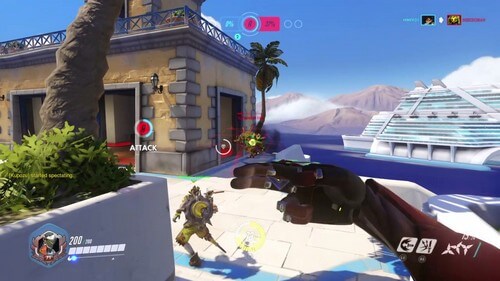 If you have already experienced FPS games, you won’t have any problem with Overwatch’s controls. (Source: Internet)

Other buttons mapping is similar to standard shooter like R for reloading, V for quick melee, and Space for jumping (in case of Genji, he can jumps twice).  Of course you can change buttons mapping as you like from Option menu. 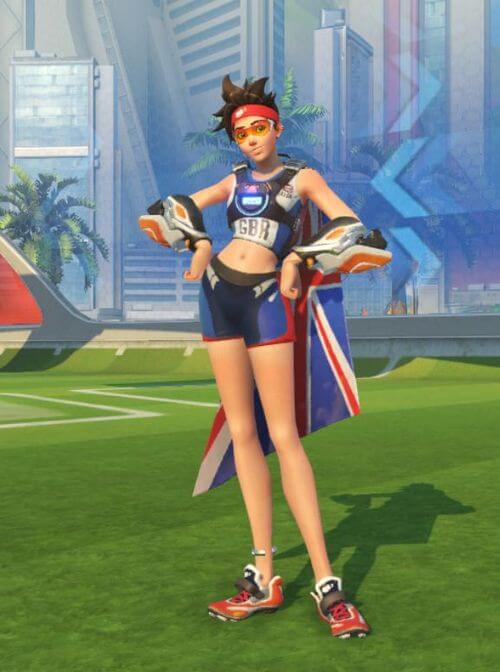 Leveling in Overwatch is straight-forward: after each game you gain an amount of experience, depending on the game length, final result, and personal performance. In Competitive mode, you will receive 15% more exp.

When you level up, you will get a loot box which contains cosmetic items like character skins, voice lines, emotes, sprays, and highlights intros. These loot boxes are also available in seasonal and special events. In case you really, really want those shiny, lovely skins, you can always grab those loot boxes with real cash. Since these loots are cosmetic only, you don’t have to worry about game balance as they bear no effect in gameplay. 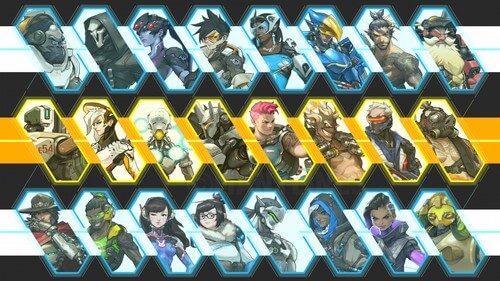 As an objective-based game, playing Overwatch isn’t simply picking a high damage-dealing character, jumping into the fray and killing as many enemies as possible. Of course you can play like that for “fun”, but it’s probably not fun for your team. Playing Overwatch is more about completing objective and therefore, there are roles to take. So, in order to choose a character, we need to understand the character roles first.

At the moment, Overwatch features 25 characters in total and they are divided into 4 character roles: Offense, Defense, Tank, and Support:

As offense characters, we generally want to be “offensive”, including pressing to the objective, scouting, and harassing enemies. These offense Overwatch heroes often have high burst damage, high mobility, yet low health pool. As the results, they are suitable for players who like agile play style, dealing massive damage to enemies. One thing to note though: Overwatch is an objective-based game; therefore, having lots of kill doesn’t necessarily mean winning.

Defensive characters are in charge of protecting a particular area, setting up a choking point, or forming a frontier. These characters are generally good at fighting in long range. In other cases, they can set up turrets, dangerous traps, or even blocking walls. Characters in defense role are quite varied and they are seem to best-suit for players who prefer “scheming”, setting up hazardous plans, or simply sniping out of their enemies.

Tankers generally have one purpose:… tanking! Soaking damage! Becoming a valiant vanguard at the front-line! They specialize in protecting ally, generating shields, and breaking enemies’ line. For players who are so used to tanking role with beefy health, bulky presence, these tankers will be their perfect candidates.

Finally we have support characters: “hidden heroes” who always keep your life going and give you insane buffs. Without these support characters, probably many of us won’t see the light of day in most battles. These characters excel at healing, keeping ally alive, and buffing. That said, having a healer in our team is always nice, but it will be disaster if our healer gets messed up by enemy team.

So now that we have taken a look at the basic information about Overwatch, it’s time to check out several Overwatch tips and tricks:

Many new players have tendency to only play particular characters or role which they feel most comfortable with. While it is understandable to only focus what we can do best, trying something new is always encouraged especially in games such as Overwatch.

Playing characters and roles we are not familiar with is difficult indeed. However, trying all of these roles and characters will give new players various perspectives about the gameplay and different mechanics. After all, the best way to defeat your enemies is to understand them first. 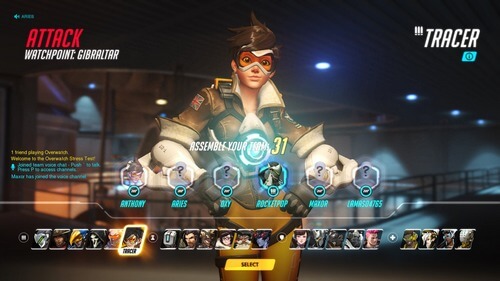 A special thing about Overwatch is that you can change your character between each round. This mechanic works splendidly in Overwatch since players will require different plans and strategies for different situation.

Does your team have too much Offense characters? It’s probably time to switch to Support characters like Mercy. Does your team lack proper tanker? Let’s get Reinhardt onto the battlefield then! As you can see, there will be lots of unexpected situations and your team will need to adapt to those situations. Therefore, don’t just stick to the character you’re using. It is much better to switch character when things don’t go well for your team. 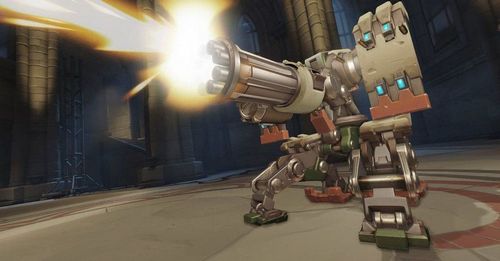 Lack of ammo is extremely annoying in FPS games. And so some players tend to be pretty hesitate when spending ammo. But fortunately for us, Overwatch provides infinite ammo! Therefore, just keep shooting to your heart content! Shooting can cause great disturbance to enemy and deny their position. Furthermore, Ultimate abilities are charged each time you deal damage so there is no reason to save ammo. 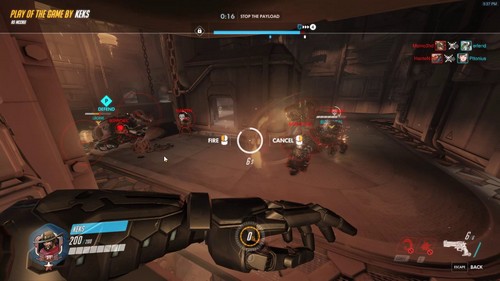 In a game like Overwatch, paying attention to sounds is extremely important. Although it may not be 100% reliable, you can still guess your enemy location based on the movement sounds. This is especially important for giving decision and timely reaction.

Of course it will feel unfamiliar at first but with a decent amount of game time, you will soon learn these distinct audio cues. 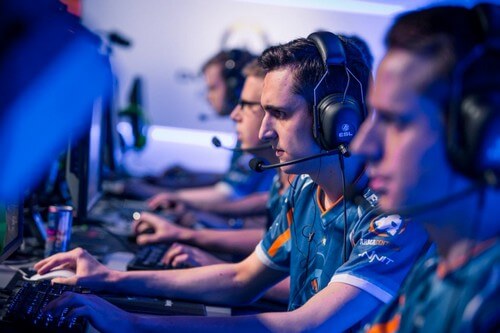 Communication is extremely important in Overwatch, especially when you want professional play. In competitive games, most teams often communicate with each other to inform each other, devise strategy, and give out orders. Of course in casual games, communication isn’t as “intense” as in competitive games. Yet, talking with teammates is always extremely helpful in every situation.