Remember Saitama from One-punch Man? He is a well-known anime character due to his absurd strength which can kill any monsters with just one hit. Of course, many people like to feel as powerful as him at least once. Luckily, there is no need to wait any further, the infamous Doomfist has arrived in Overwatch and surely he will give his enemies hell to deal with. And so today, let’s take a deeper look at newest member of the Overwatch characters: Doomfist – the “One-punch Man” of Overwatch.

1. The Story of Doomfist:

From a brilliant CEO and martial artist…

Doomfist’s real name is Akande Ogundimu; he was born from a prospered family of Nigeria which specialized in prosthetic technology. With his brilliant leadership and cunning, Akande raised his family business even higher. While during his free time, he focused on his true hobby: martial art and combat. Interestingly, he believes that conflict is the only way for mankind to develop and this ideology seems to be the very reason why he becomes the infamous Doomfist we know today.

…To a feared destroyer on the battlefield.

Before Akande took the mantle of Doomfist, after the Omnic Crisis, Akande’s right arm was lost, so too his martial arts pursuit. Even after his cybernetic enhancement, Akande was forbidden from joining any martial arts competition. 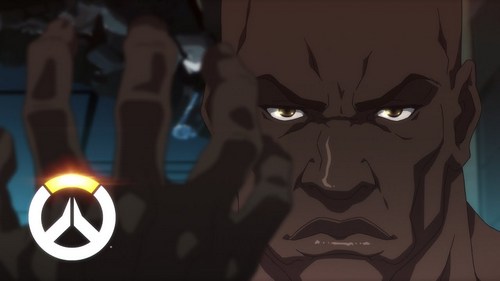 Doomfist has escaped! What will you do!? (Source: Internet)

Eventually, his fate changed when he met the second Doomfist – Akinjide Adeyemi, the Scourge of Numbani. At first, Akande joined with Akinjide as a mercenary, and then a member of Talon. Like a set-up by fate itself, Akande realized that Talon shares the same ideology as him. While working for Talon, Akande believes that he has even better vision, thus leading him to kill his mentor Akinjide and succeeded him. As the third Doomfist along with Talon within his command, Akande, a.k.a Doomfist, could have drove the whole world into war, if not for the prevention from Overwatch.

Years have passed, but the his spirit has never waned. Doomfist now has returned and he’s preparing to bring war to this world once again.

So with his story in mind, let’s come to the main parts which are Doomfist’s abilities and playstyle.

Doomfist is the newest addition to the offensive Overwatch characters and by saying that, he’s really good at it. To some extent, he’s quite a mobile character and also a pure offensive character. And with his “overpowered” Rocket Punch, death comes to those dare to stop him. 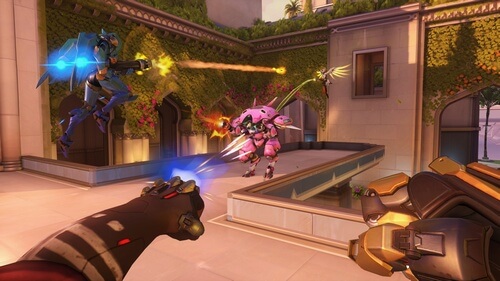 Like all other Overwatch characters, Doomfist possess a range weapon which is his hand cannon. His Hand Cannon acts like a shotgun which shoots 6 pellets per shot, each pellet deals 11 damage which makes a total of 66 damage in one shot. His Hand Cannon is also a bit different from many other weapons since we can’t force reload. It will reload by itself.

If we look at his range weapon’s damage alone, we can say Doomfist is “bad”. But the problem is: it isn’t his main weapon. His power lies within his name’s trademark: his fist. 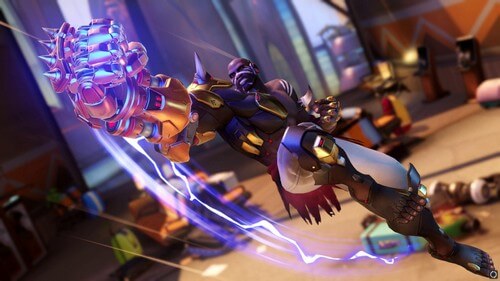 To the air with you! (Source: Internet)

This skill deals 50 damage and launches both himself and his target into the air. It surely isn’t the main damage dealing skill. However, since this skill launches Doomfist into the air, there are much more applications for this skill rather dealing damage alone, depending on his location and the current situation. 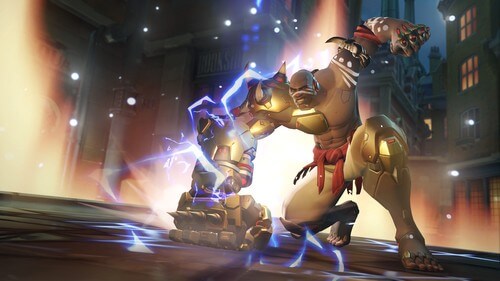 This skill is really deceptively long-range and it’s a good way to quickly approach the target. And he does, his enemy’s nightmare begins. 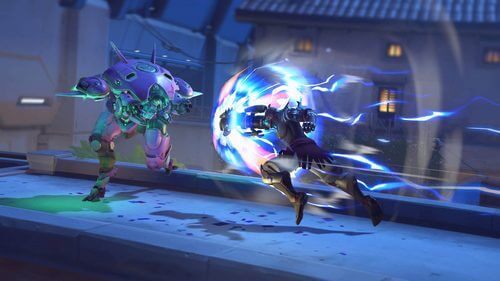 Will you survive this strike? (Source: Internet)

Rocket Punch is exactly when the fun starts. This skill is what makes Doomfist feels like One-punch Man as he can one-shot half of the Overwatch characters. And so there is no surprise that lots of people hate this guy and consider him to be “stupid”.

With only 4s cooldown, Doomfist can rapidly one-hit kill any unfortunate enemy, especially when he hits the wall. Of course, Doomfist can’t kill tanky heroes with just this skill alone. But why he has to deal with tank when he can quickly close the 23-meter gap and smash the back line with Rocket Punch? 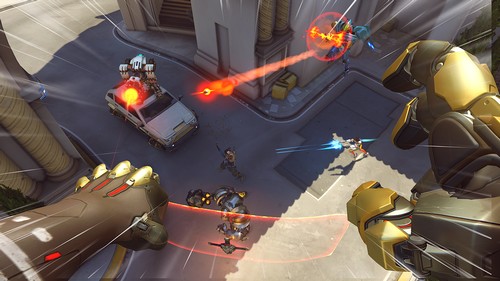 Death from above! (But with another twist) (Source: Internet)

Doomfist’s Ultimate Meteor Strike is probably the last nightmare you can expect from Doomfist. When activated, Doomfist will jump into the air, waiting to launch his destructive fist on the ground. While in the air, no one (which means all Overwatch characters) can target him. This means Doomfist will become an imminent doom for those who aren’t aware of him (which is a pretty popular case since we don’t normally fight alone in Overwatch).

The closest enemies to his radius will take 300 damage, while those stay further take way less damage. Therefore, Meteor Strike’s damage will be most effective if Doomfist can land a direct hit on the enemies. That said, remember that Meteor Strike isn’t the real Doomfist’s trademark for killing, and also we can use Meteor Strike more creatively rather than just damaging enemies.

Some people say that “The best defense is a good offense”, and in the case Doomfist, it is exactly so. When he deals damage to enemies with one of his ability, he will gain additional temporary health. This skill allows him to endure on the battlefield much longer; however, this doesn’t mean Doomfist is invulnerable. But one thing we can ensure: if you don’t burst him down fast, he will kill you in longer combat.

Now that we’re familiar with Doomfist’s skill, let’s take a look into his playstyle.

When we look at Doomfist’s arsenal, no doubt we will think he’s an aggressive, close-quarter Overwatch characters. And yes, he’s extremely efficient at that. Doomfist’s “One-punch Man” skill, which is Rocket Punch, is an extremely devastating ability and for most of the time, it’s his primary weapon of killing enemies. 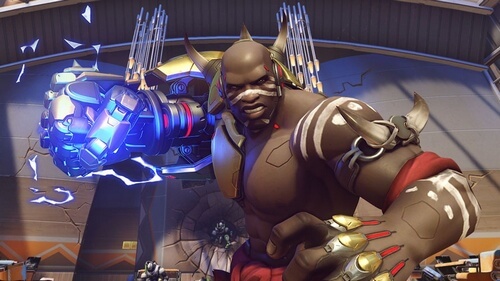 Doomfist is kind of a pure offensive character and what we want to do with him isn’t hit and run. It’s about closing gap quickly and gives enemies hell. Rising Uppercut and Seismic Slam aren’t really reliable damage dealing skills, but they’re decent to help Doomfist closing gap with his opponent. On the other hand, both Rising Uppercut and Seismic Slam can be used as partial escape/maneuver skills in dire situation. That said, Doomfist’s passive is a splendid way to persist in the fight and it’s suggested to keep Doomfist damaging enemy rather than running.

Doomfist’s Ultimate looks like a crazy damage dealing at first. And true! It’s massive 300 damage can one shot almost everything, but it requires him to have a clean hit on his opponents. Another application for this skill is to escape. As he vanishes into the air, no one can target him. Since he doesn’t have any reliable escape abilities, his ultimate is the only safe way for him to get out of dire situation. This can also be used for re-positioning or picking-up separated enemy.

Let say you’re facing Doomfist and you think he’s overpowered? Well in truth many other players will agree with you on this. But to be frank, He is actually “fragile” according to many experienced players. And when we think about it, it actually makes sense.

What makes Doomfist powerful is his aggressive close-quarter combat, but that’s also the reason for his downfall. When he jumps into the frey, there is no reliable way for him to escape or dodge, except for his ultimate. If he faces crowd-control/disable skill and burst damage, high chance Doomfist will die before he can do anything. If we base on this info then McCree will be the most effective Overwatch characters to counter Doomfist. McCree has two things we need to beat him down: stun and burst damage. Of course if McCree got hit by Doomfist due to carelessness then high chance McCree will die beforehand. But in case of experienced players who know positioning and choosing the right moment, Doomfist probably don’t have a chance against McCree. 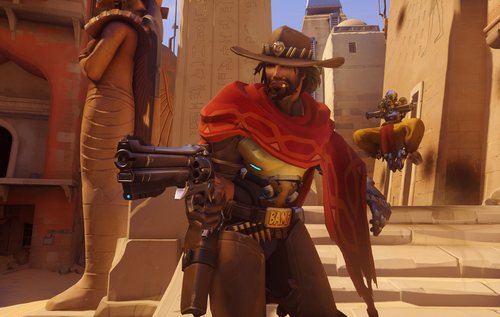 Some other people recommend Soldier 76 and Sombra as Doomfist’s counter. But here’s the thing:

Another hint is that Doomfist isn’t that agile like other quick-dodging Overwatch characters like Tracer. And so these characters like Tracer can be another way to counter him, provided that you have team to support your battle with him. That said, in 1v1 combat, it’s still an intense match since if you make one mistake and let he successfully get to you. There’s high chance that you’ll be dead.

If we consider all potential strategies for now then to some extent, we can say Doomfist is currently overpowered. He can one-hit kill half of Overwatch characters, he can sustain in long combat, he’s extremely aggressive and he can approach his opponent quickly. All of these characteristics give us feeling that Doomfist is unstoppable.

Now as mentioned, to some extent we can say Doomfist is OP. But some professional players believe Doomfist to be a good addition to the current state of Overwatch. He absolutely has potential to break the current meta and if he does, other rarely seen heroes will also have their place in the new meta. Because of that, we may see him OP at the moment but who knows, thing will change in the near future and Overwatch will become much more excited.

Well that’s it folk! Stay tune for more news on Freeaddon in the future!

2 thoughts on “Guide to Doomfist: “One-punch Man” of Overwatch”