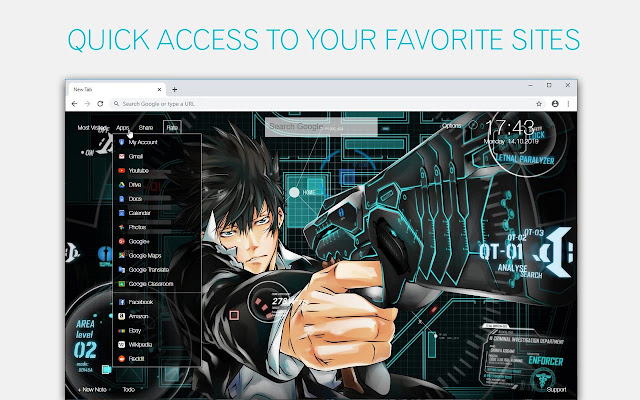 ✔ Customized new tab page featuring Psycho Pass wallpapers in HD quality. Choose your favorite wallpapers, and even use many FreeAddon new tab along with this one, not just Psycho Pass anime.
✔ Count Gmail unread emails. Quick access to most visited sites and Google Apps like Gmail or YouTube.
✔ Check out current date-time with a digital clock right on Psycho Pass anime themed newtab page.
✔ You can also add sticky notes, to-do tasks list, reminder and countdown to events.

★ FreeAddon’s “Psycho Pass Wallpaper HD Custom New Tab” extension is completely free to use. Our extension DOES NOT have ads or virus. 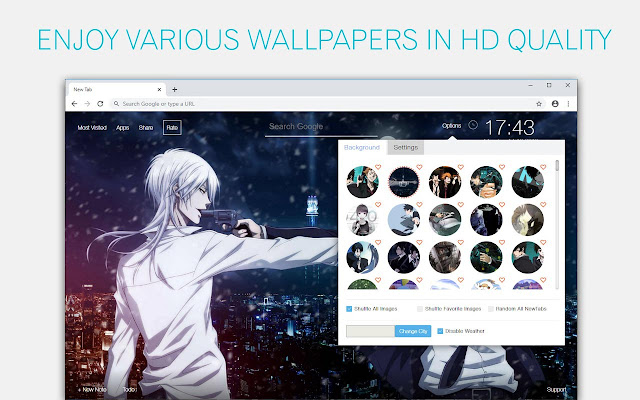 – Psycho-Pass (Japanese: サイコパス Hepburn: Saiko Pasu) is a Japanese cyberpunk anime television series produced by Production I.G. It was co-directed by Naoyoshi Shiotani and Katsuyuki Motohiro and written by Gen Urobuchi, with character designs by Akira Amano featuring music by Yugo Kanno. The original Japanese cast includes Kana Hanazawa as Akane Tsunemori, Tomokazu Seki as Shinya Kogami, and Takahiro Sakurai as Shogo Makishima. The series was aired on Fuji TV’s Noitamina programming block between October 2012 and March 2013. A second season began airing in October 2014, with an animated film released in January 2015. In 2018, it received a compilation film trilogy that premiered from January to March 2019. The story takes place in an authoritarian future dystopia, where omnipresent public sensors continuously scan the mental states of every passing citizen. A third season is set to premiere on October 24, 2019.

– Psycho-Pass originated from Production I.G.’s interest in making a successor to Mamoru Oshii’s achievements. The series was inspired by several live-action films. Chief director Katsuyuki Motohiro aimed to explore psychological themes in society’s youth using dystopian storylines. Multiple books and movies influenced Psycho-Pass with the most notable being the 1982 American science fiction film Blade Runner. The series was licensed by Funimation in North America. Two manga adaptations has been in serialization in Shueisha’s Jump Square magazine and several novels, including an adaptation and prequels to the original story, have been published. An episodic video game adaptation called Chimi Chara Psycho-Pass was developed by Nitroplus Staffers in collaboration with Production I.G. New novels and another manga were serialized in 2014. A prequel manga centered around Kogami’s past has been written. 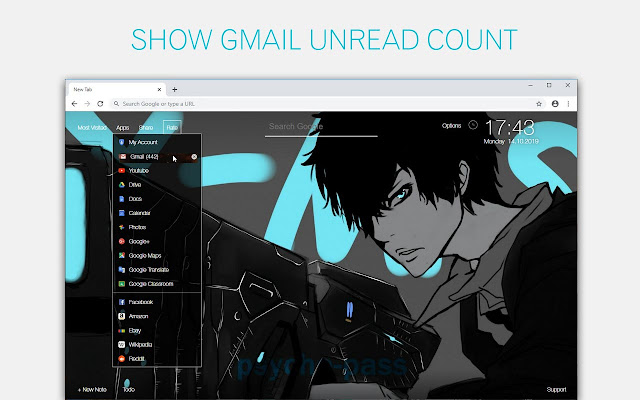 – The first anime, Psycho-Pass, has garnered critical acclaim in both Japan and the west with critics praising the characters’ roles and interactions set in the dystopia. The animation has also been praised despite issues in latter episodes which required fixing in the DVD volumes of the series. On the other hand, the second series, Psycho-Pass 2, received mixed critical response stemming from its heavy use of gore as well as the new villain. 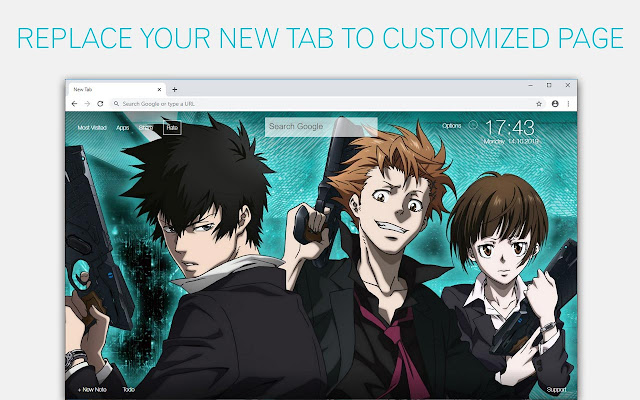