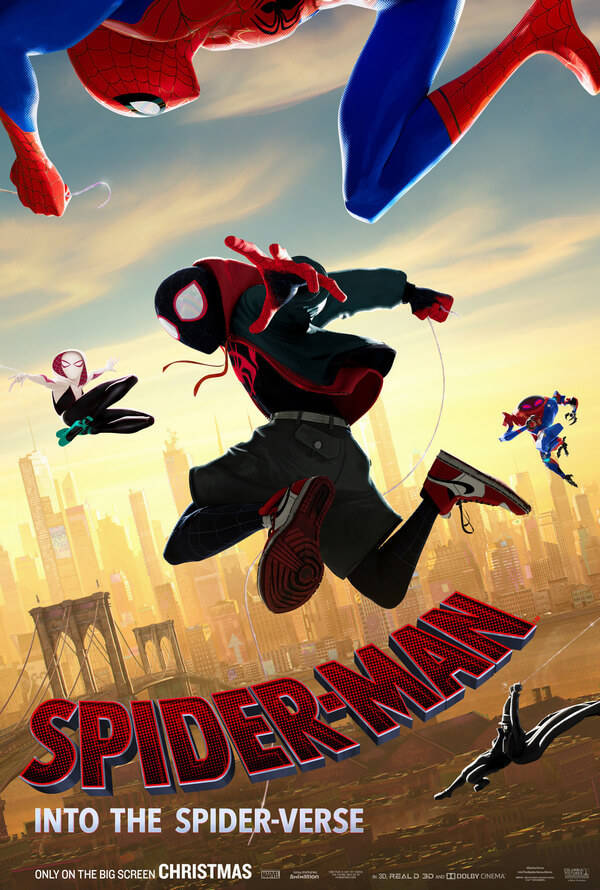 Brace yourself, the Spider Verse is braking in! (Source: Internet)

Spider Man Into The Spider Verse is the upcoming Spider Man animated movie made by Sony Pictures Animation in collaboration with Marvel. The film is directed by Bob Persichetti, Peter Ramsey, and Rodney Rothman with screenplay by Phil Lord and Rothman. Its cast also includes a number of acclaimed actors like Jake Johnson, Hailee Steinfeld, Nicolas Cage, John Mulaney, and more…

In short, the movie tells a story of Miles Morale (voiced by Shameik Moore), a young teenager who one day got bitten by a radioactive spider. Then he accidentally stumbled at a machine which “accidentally” summoned various Spider Man versions from various universes, including Peter Parker (voiced by Jake Johnson), into this world. And so with his newfound power, Miles has to learn how to use this power, and thus, works with other Spider Men in order to defeat Kingpin a.k.a Wilson Fisk (voiced by Liev Schreiber).

The movie is going to be released soon on December 14, 2018. And with all that basic information out of our way, let’s get into the main part! 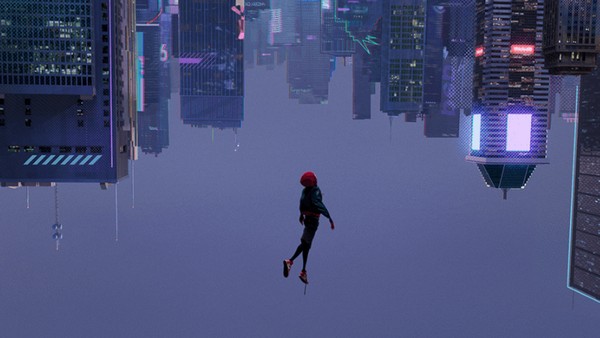 First of all, we have to talk about the visual in this film. It literally oozes with styles and artistic sensations. The idea behind such visual direction is that they wanted the audiences to feel like they are walking into a comic. To do this, they used the traditional hand-drawn techniques just like in comic books, combining with multi-plane camera and modern virtual reality environment. As we mentioned before, a number of viewers were quite skeptical at this kind of visual style at first. However, such skeptical feeling will soon fade away when we keep watching the film. Eventually, we realize the exceptional beauty of this film. We do feel like immersed in this “comic world”. We can also see small “comic-style” details like the text boxes which look just like in a comic book.

There are moments when we are absolutely astounded by the state-of-the-art scenes alone. Combining it with the sleek, smooth animation, this can be the most polished animated movie of 2018 in terms of visual and animation alone. And talking about animation, there are few occasions when it feels like dropping frame-rate but that is probably intentional. But overall, it will not drop you out of the experience.

Sound and music in general is incredibly good. The voice-acting is superb and the sound effects are really well done. Then there is the soundtrack which is absolutely fantastic and no doubt lots, lots of people would want to have its soundtrack disk.

Of course visual is not the only deciding factor for an animated movie. And fortunately, Spider Man Into The Spider Verse represents a cool Spider Man story done right.

The story in this film is incredibly good. It is surprisingly hilarious (in a good way), while at the same time, It has great complexity which is, to certain extent, probably too complex for child audiences. Nonetheless, it manages to appeal both young and mature audience alike. It is really enjoyable, and also, it has deep meaning and message behind it. 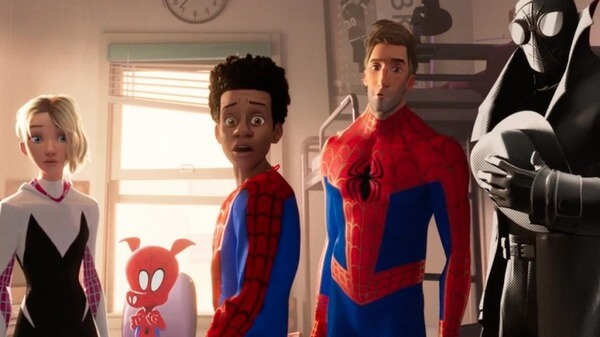 If you have already seen the trailers, you will see that there are multiple Spider Man versions featured in this movie, including the main lead Miles Morale (by Shameik Moore), the man himself Peter Parker (by Jake Johnson), Spider Woman a.k.a Gwen Stacy (by Hailee Steinfeld), Peter Porker a.k.a Spider Ham (by John Mulaney), and Spider Noir a.k.a Peter Parker of alternative Spider-Man 1930s (by Nicolas Cage). And just like in every movie which features multiple heroines, it is really hard to pull all of these characters together and give each of them appropriate screen-time.

In case of Spider Man Into The Spider Verse, they absolutely nailed these Spider Man characters. As the story progresses, a new Spider Man version will be introduced and each new Spider Man has their own way to introduce their own story. The best thing is: each of these characters is given great introduction and screen-time, while also, maintaining good consistency and cohesion throughout the storyline. And here’s when the comedy element comes into play. Every comedy moment has a clear purpose of bringing in the mood and telling the characters’ story in a fun and engaging way. Dialogues are strong, while the jokes are smartly delivered. 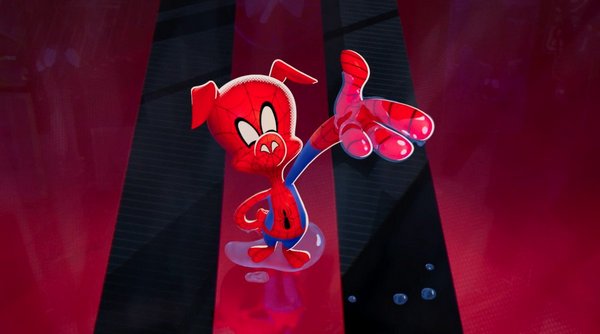 There are also sub-plots throughout the movie but they are not put in just for fun or advertisement purpose. All of them do feel matter in the main story as a whole. And by the way, we highly recommend staying till the end credit because there will be a delightful surprise by the end. That said, towards the end of the film, there is a notion of plotline getting wrapped up so quickly. But even so, it should not be an issue considering the amount of characters and plots put in this film.

Along with the strong story, we have a strong cast of interesting, convincing characters.

First of all, Miles Morale as the main lead is awesome. In the original Spider Man comics, Miles Morale is a fairly new member of Spidey pantheon. And in this movie, he is a half-African-American teenager who has quite a rough life with his family and school-life. The trailers already showed a slight info regarding his situation: Miles’s dad – Jefferson Davis-Morales (by Brian Tyree Henry) – is a policeman and he extremely loves his son. Yet at the same time, Miles finds it hard to cope with his dad’s action. Not to mention, he enrolls a prestige school where he has time getting used to environment. 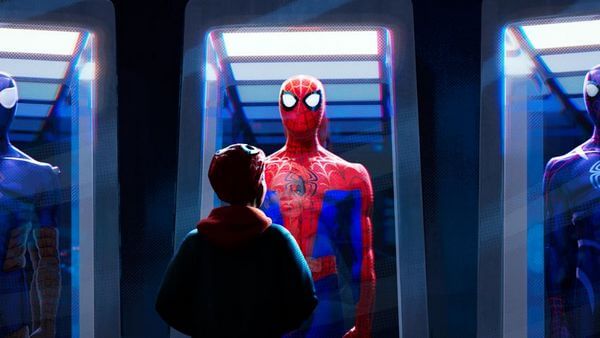 Are you ready to wear the Spider Man mantle? (Source: Internet)

Miles’s story is intriguing thanks to his well-written and relatable story. He is similar to Peter Parker during his early days. He is flawed, he has many daily-life concerns while at the same time, he always tries to prove himself and wants to do something good. And this is a fascinating bit: many teenager lead characters like Miles Morale tend to fall into this “teenager lead trap”. In many cases, those teenager characters are forced too much on the “I have to do something” agenda. Luckily Mile’s development does not fall into this trap. His progression makes sense, we see him struggling, then trying to master his power and also becoming more mature.

Other Spider Men are also really well-written; however, we will try not to talk too much about them here. Peter Parker seems to be a carefree man who seems reluctant to teach Miles at first. But there is a clear story-based reason for it, which will be explained later in the film. We also see Peter Porker, a funny pig-version of Peter Parker who really makes some great, funny moments.

In terms of antagonists, the main villain here – Kingpin (by Liev Schreiber) – is also a good and relatable character. Since this is an alternative universe, Kingpin got a more expanded backstory and characteristic, and he does not appear in this movie not just for the sake of having an evil character in a superhero movie. The only thing bothers us is that Kingpin seems to have not that much screen-time compared to other Spider Man characters. That being said, we still don’t think it takes away the enjoyment of the film, given how well they developed the Spidey team.

With all the high-production values, our final verdict for Spider Man Into The Spider Verse is a 9/10. It is an exceptional Spider Man movie many people have been expecting for. This film is an immersive, highly enjoyable experience which no Spider Man fan should miss. It has been a very long time since people feel dying to see a new Spider Man sequel like this, which already tells us how incredible this movie is.

And along with the Marvel Spider Man PS4 game this year, we gotta say Spider Man got a really good treatment this year and let’s hope that this momentum will keep on going in the future. For now, thank you and stay tune for more news in the future!