It has been more than 10 years since the last time fans have seen a brand new Devil May Cry sequel since Devil May Cry 4 (excluding all the special editions and DmC Devil May Cry by Ninja Theory). Therefore, we can understand how crazy it was when Capcom first announced the upcoming sequel: Devil May Cry 5 in E3 2018 with the fabulous “boy band” – Nero, Dante, and the new character V. So what things we know about Devil May Cry 5 so far? Let’s find out! 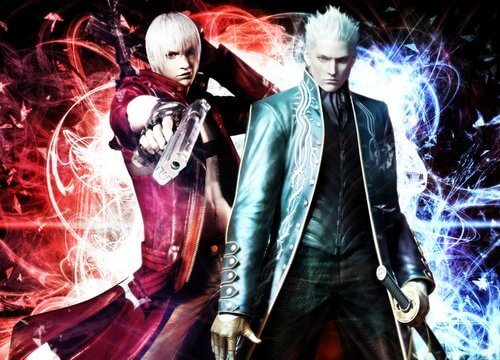 The franchise mostly focuses on Dante and his lineage. Prior to Devil May Cry 3 timeline, there was a legendary devil named Sparda who fought against the tyranny of the demon emperor of the Underworld – Mundus. Later on, Sparda fell in love with a human girl Eva, they had 2 children: Dante and Vergil, who both were half-demon, half-human and they both possessed the tremendous power thanks to their devil’s heritage. In Devil May Cry 4, the game featured a new descendent of Sparda’s bloodline – Nero who was Vergil’s son. 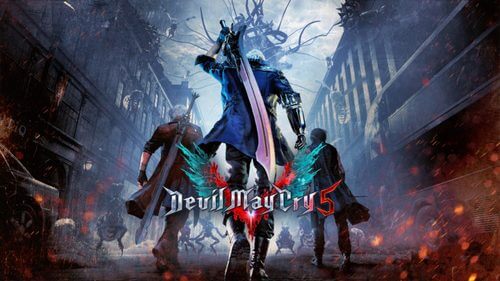 Are you ready to join the crew? (Source: Internet)

2. Things we know about Devil May Cry 5

It takes place after Devil May Cry 2 and 4 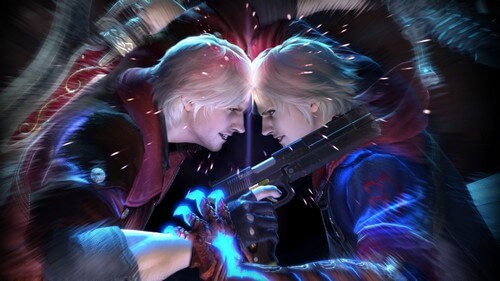 Well it has been a long time isn’t it? (Source: Internet)

As mentioned, Devil May Cry 5 will take place after Devil May Cry 2 and 4. This also means Dante and Nero have already met each other and they are basically… uncle and nephew. However, there are certain events happened before Devil May Cry 5 which have not been explained yet. For instance, for some reason Nero’s Devil Bringer was lost and instead, he had a new cybernetic arm built by Nicoletta Goldstein (or Nico for short). That said, we expect everything will be explained properly when the game comes out.

It will feature 3 playable characters

Devil May Cry 5 will feature 3 playable characters for the first time ever in Devil May Cry series: Dante, Nero, and V. At the current time of this article (October 1, 2018), only Dante and Nero had their own playable demo, while V’s gameplay is still a mystery. 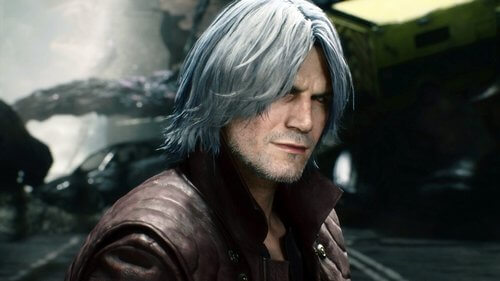 The hot boy is back… (Source: Internet)

Judging by the trailers, we can see Dante is still as cocky as ever (but that is what makes him interesting); however, he seems to be more on mature side especially with his little bit older appearance. Most of his abilities and powers also seem to remain the same. The recent Dante gameplay demo also showed a number of his Devil Arms, namely: 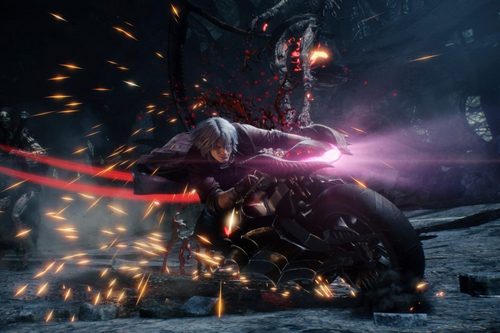 … with a demonic motorcycle! (Source: Internet)

Along with Dante’s Rebellion and the dual pistols Ebony & Ivory, Dante also has access to his 4 fighting styles, namely Royalguard, Trickster, Gunslinger, and Swordmaster. Royalguard style features ability to parry enemy’s attacks, Trickster style features ability to teleport in a short distance, while Gunslinger and Swordmaster gives Dante more edges and movesets for certain weapons. And finally, Dante can also transform to his Devil Trigger form which tremendously increases his attack power and regenerates his health. 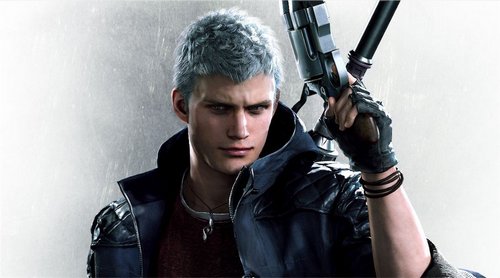 The boy has grown! (Source: Internet)

The Vergil’s boy – Nero – has returned in Devil May Cry 5 and funny enough, he seems to be even more arrogant than his time in Order of the Sword. To certain extent, he is like Dante in younger years. That said, we expect to see his character development throughout this new sequel.

In terms of power, for some reason his Devil Bringer was ripped off by a mysterious entity. So instead, Nero uses a cybernetic arm called Devil Breaker crafted by Nico Goldstein. His Devil Breaker comes with 8 different types, all share 3 particular abilities: 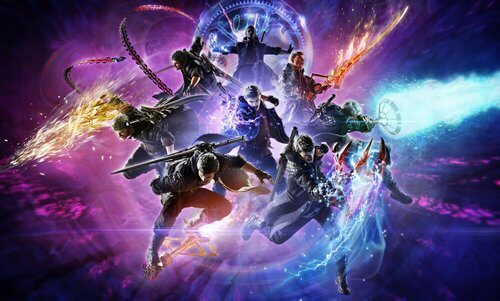 Among the 8 Devil Breakers, there were two particular ones which showcased in the demo:

The other 6 Devil Breakers include:

And last but not least, Nero’s two signature weapons also make a return: 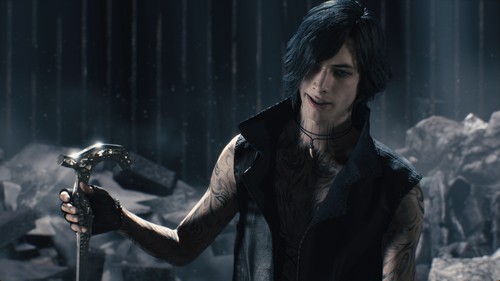 V is the brand new playable character and according to certain sources, it seems his full name is Vitale. There are quite a number of speculations about this new guy’s identity. The most popular one is that he is Dante and Lady’s son, which kind of makes sense given the relationship between Lady and Dante. If V is really Dante’s son, Trish will be less likely to be V’s mother despite being a very popular character among fans. The reason is Dante said that Trish resembles his mother so… having a son with Trish does not sound legit. Power-wise, nothing has been revealed yet about V’s capability. However, it is confirmed that his fighting style will be drastically different from Dante and Nero. Ideally, V will fight with his cane and by summoning demonic minions with his book.

The game is developed with RE Engine 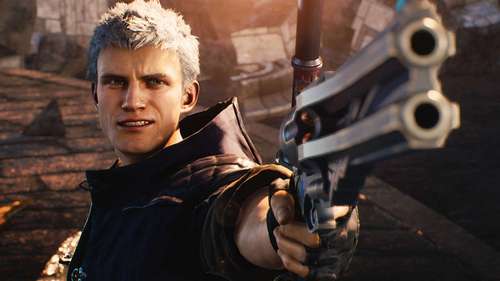 No matter how we look at it, we cannot deny that Devil May Cry 5’s graphic looks fantastic. For those who do not know, the game uses RE Engine which was the very same engine used for the upcoming Resident Evil 2 Remake and 2017 Resident Evil 7. So at the very least, we can be ensured about Devil May Cry 5 visual quality.

Nero can call Nico via phone booth for upgrades 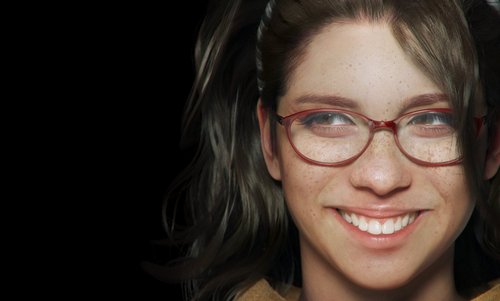 In Devil May Cry 5, we see Nero travels with a girl named Nico who crafts his Devil Breaker. According to Capcom, Nero will gather special crafting materials from bosses and he will be able to call Nico via phone booth. Afterwards, Nico will drive to Nero’s location and give him upgrade, though we still have not seen this upgrade/enhancement mechanic yet. And also, we are wondering if this mechanic will apply to Dante and V.

The game will include… microtransaction 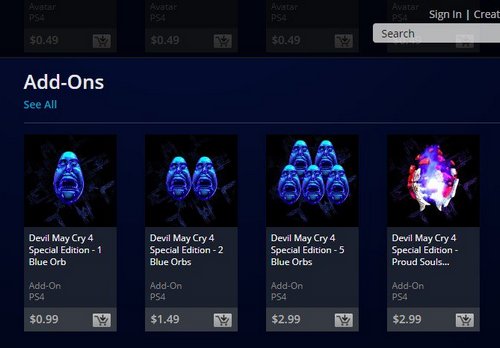 Will it be like Devil May Cry 4 microtransaction? (Source: Internet)

This seems to be a deal-breaker for many players. Basically, Devil May Cry 5 will include microtransaction which allows players to purchase Red Orbs used for upgrades with real money. Capcom also stated that this will be added only as a choice and it will not affect the game itself. But no matter if that statement is true or not, definitely lots of gamers do not like this decision. 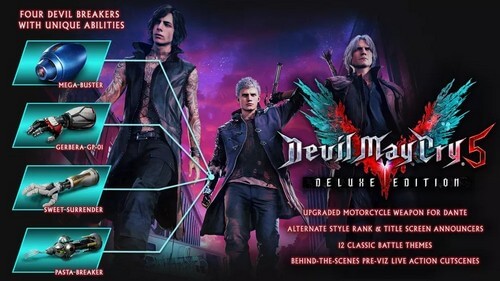 Just like most games in current era, Devil May Cry 5 will also include a special edition called Deluxe Edition which will provide special bonuses. These include:

For those who’re living in Japan, pre-ordering Devil May Cry 5 from Amazon Japan will also give you an exclusive Banana Devil Breaker (yeah no joke!). We wonder if it will be available for the West though.

And that’s it folks! What do you think about Devil May Cry 5? Feel free to share with us and for now, thank you and stay tune for more news in the future!

One thought on “Things We Know About Devil May Cry 5 So Far!”