Summer 2018 has seen several quite a good numbers of great series like Attack on Titan Season 3, Overlord 3, Cells at Work, Grand Blue, and more…  And coming up next, there will be tons of incredible titles hitting Anime Fall 2018. So with no further ado, let’s check out the top 10 most anticipated Anime Fall 2018! 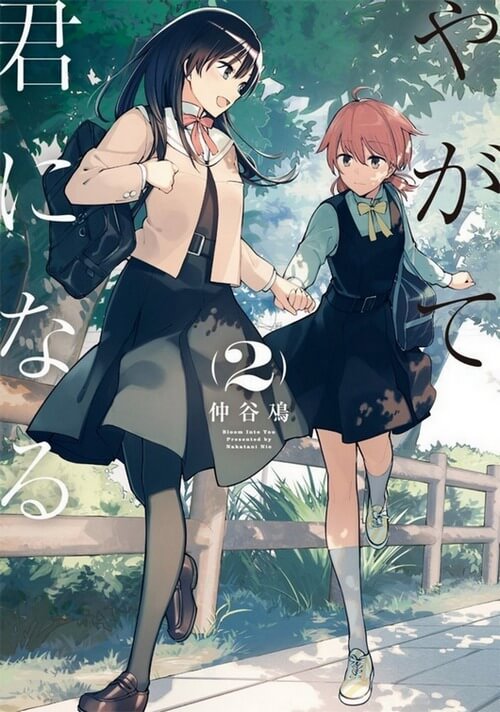 Kicking off the list we have a yuri anime called Yagate Kimi ni Naru (also translated as “Bloom Into You”), which based on the original manga of the same name. The story tells about a schoolgirl named Yuu – a fan of shoujo manga. She once received a love confession and it kindled loving, dreamy feelings within her. But when her classmate confessed his love to her, she felt nothing and quickly felt into disappointment. However, what will happen if one day the honorable student council president Nanami confesses her love to Yuu?

Frankly speaking it is really difficult to adapt a yuri manga into an anime due to the differences in presentation methods. However considering the story alone, Yagate Kimi ni Naru is a highly acclaimed series among shoujo-manga fans. With a great story, let’s hope that the anime will manage to capture the same beauty. 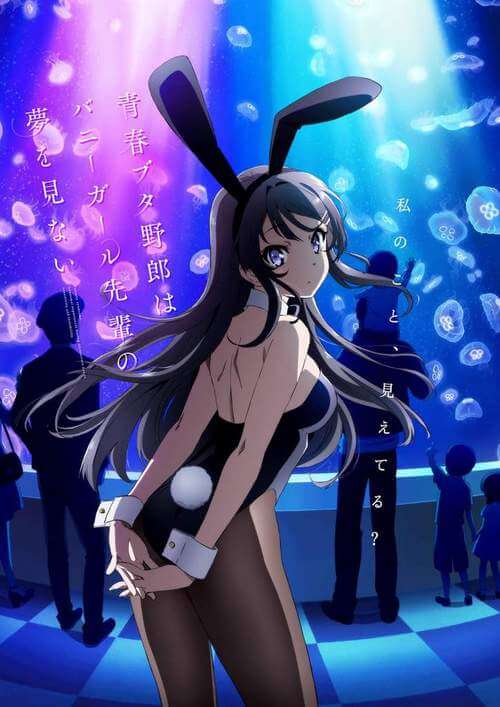 Putting the lengthy name aside, the original light novel of the same name has quite an interesting story: Sakuta Azusagawa is a normal high school student, yet one day he witnessed something peculiar: a girl wearing bunny suit appeared in front him, but it seemed no one else aware of her. Later on, he found out that the bunny girl was actually a real person; in fact, she was Mai Sakurajima – Sakuta’s upperclassman and also a famous actress who has already gone on hiatus. And for some reason, other people cannot see her when she wears bunny suit. Sakuta decides to seek answer for this mystery, and as he explores, he learns about Mai’s secrets and meets people who shares the same phenomena as Mai.

Given the bizarre synopsis, the light novel has already had an ongoing manga adaptation. So far, the story has been quite interesting, blended with mild comedy and romance. With the success from the manga adaptation, we can hope the same for its upcoming anime. 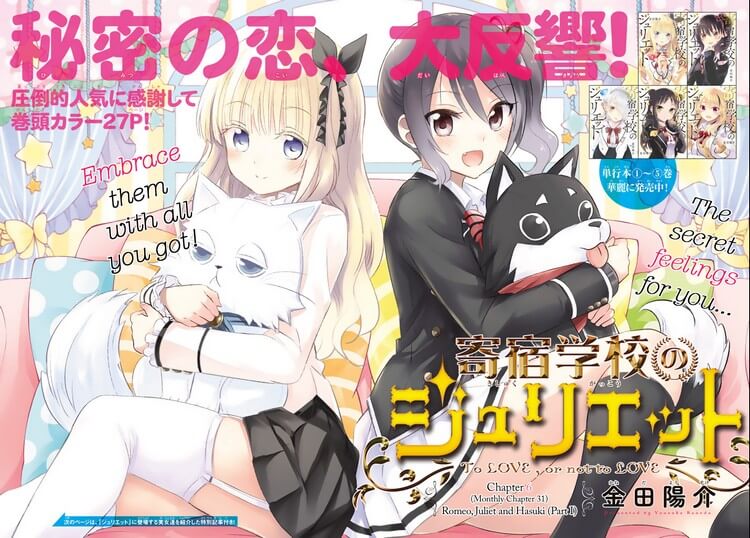 Kishuku Gakkou no Juliet (or also known as Boarding School Juliet) is originally a romance manga inspired by the traditional story of Romeo & Juliet, a famous play written by William Shakespeare, yet with “a few” tweaks on it. The manga tells a love story about Juliet Percia and Inuzuka Romio, the two honorable leaders of their respective families: White Cat and Black Dog. These two families are eternal enemies, and naturally, Juliet and Romio’s relationship are the same… or at least that is just what people believe. In truth, they fall in love with each other, but they have to lie about their relationship until one day the two lovers can openly express their true feelings.

Unlike what we may initially think, Kishuku Gakkou no Juliet is not a tragedy-type of love story like the original Shakespeare’s play. It is a love story filled with comedy and action, and we doubt that this story will get a bad ending (unless the author decides to suddenly snap). At first glance this may seem like a “harem anime” but be sure; such harem scenario is not the case here. 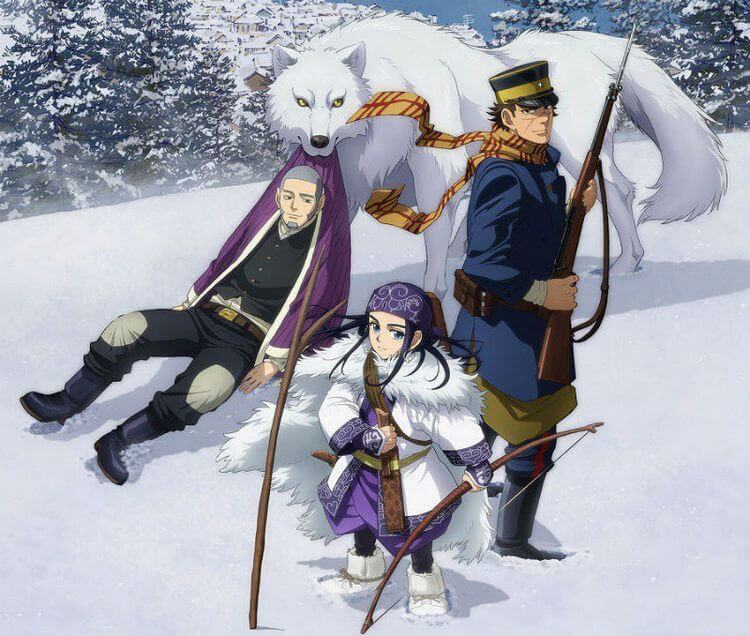 The gang is back! (Source: Internet)

Following the success of the first season, Golden Kamuy will make a return with its second season, starting on October 8, 2018. Judging by the good reception with the first season, we can expect the same quality from this next season. Other than that, there are not much to say about this series except than: be patient and enjoy this series as a whole. Things will only get better and better. 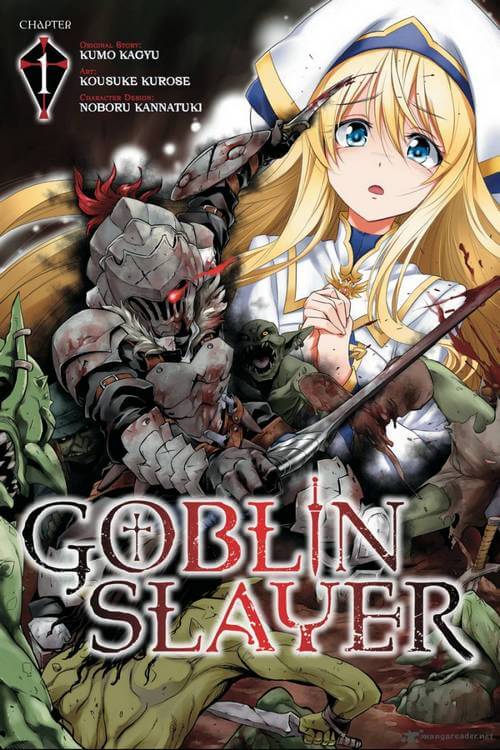 Ready for some… really dark events ahead! (Source: Internet)

Overlord is a fantastic Dark Fantasy story and it has been doing pretty well with 3 anime seasons so far. And for those who likes Dark Fantasy genre, coming in Anime Fall 2018 we have Goblin Slayer which originated from a light novel of the same title. It tells the story of a young priestess who has just had her first adventurer team. Together, they take on an “easy job” related to goblins. The goblins are often deemed as child-play by most adventurers, but when the team finally gets into work, they soon find out the nightmare awaiting them: overwhelming ambushes; unexpectedly brutal, cruel goblins; death by these “lowly creatures”, and even rape. As the young priestess is about to meet her nightmarish end, a mysterious warrior suddenly appears and slaughters all the goblins – the man who known as Goblin Slayer. And so, fate binds the two as they form party together as they continue working with each other. But what dark secrets lie ahead? There is only one way to find out…

Goblin Slayer is quite popular in recent year, especially with its ongoing manga adaptation. The overall theme is rather dark and brutal. There are all kinds of dark stuffs viewers can expect from these kinds of story: death, tragedy, rape, etc… Even the main protagonists do not feel like having “plot armor”. It feels like tragic events can happen to them every time, which is a good thing for Dark Fantasy stories. Of course, the anime adaptation may (and highly will) not present certain sensitive stuffs (like raping). But it is a dark story nonetheless and Dark Fantasy fans should not miss this anime. 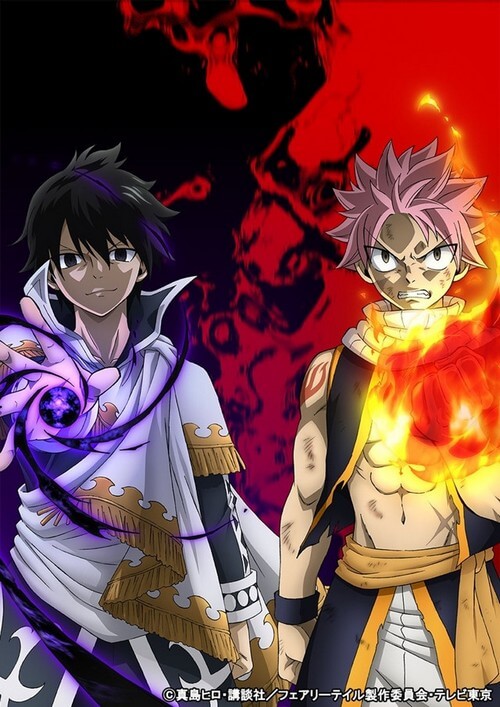 It has been 4 years since the last season of Fairy Tail anime back in 2014. And on Oct 7 this year, Fairy Tail fans will get to see its finale season which is likely to adapt the final arc of Fairy Tail originally manga. Zeref – the infamous Black Wizard – now finally commences his true plan, and also, the cataclysmic Black Dragon Acnologia will also soon jump into the chaos. Fairy Tail wizard guild, along with other guilds, will have to work together if they wish to repel such demise.

Honestly, we prefer not to spoil any more information regarding the upcoming season. But if you are fans of Fairy Tail, this should be a final love letter we all should look for. 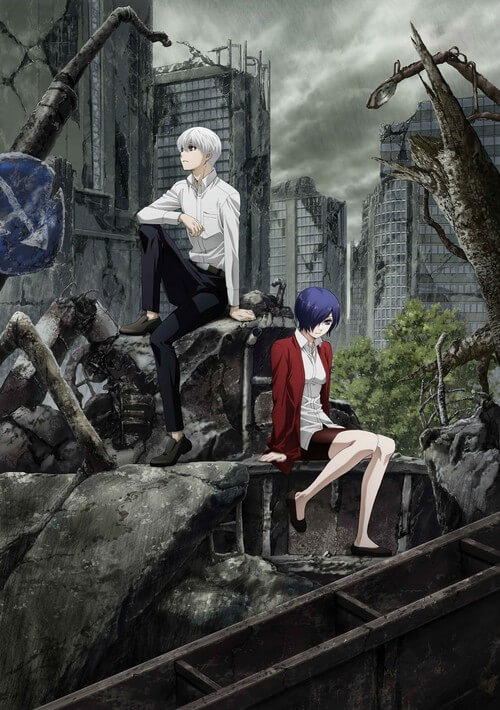 The final end of Tokyo Ghoul re? (Source: Internet)

Despite the not-so-successful reception of the first Tokyo Ghoul re season, the anime in overall still receives huge popularity. Furthermore, there are still lots more going on after the first season and this second season is expected to cover the rest of the story.

For those who haven’t known, Tokyo Ghoul re manga has ended since July 19. And while the latter half of the manga seems to be rushed, the overall story of Tokyo Ghoul re and the original Tokyo Ghoul as a whole is an incredible 7-year journey and it is arguably among the best seinen series to date. With its second anime season, this will probably be the last time we get to see Tokyo Ghoul. But, let’s hope that Ishida-sensei will come up with a new series soon. 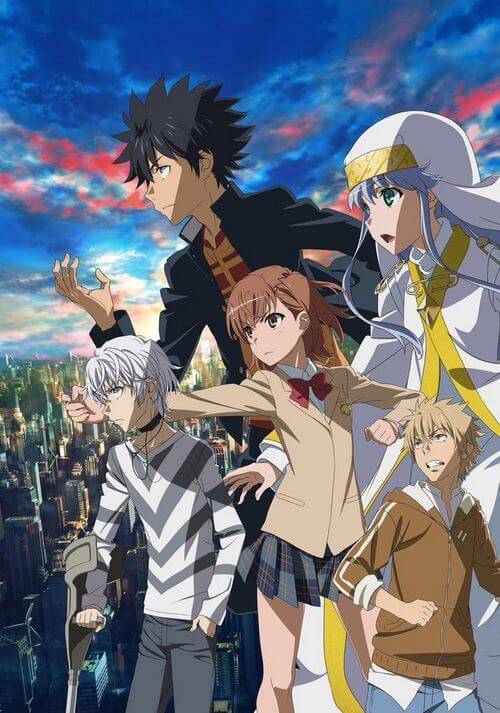 The Toaru series (also known as “A Certain” series) is a huge series especially since its first anime adaptation A Certain Magical Index (Toaru Majutsu no Index) in 2008 and the spin-off A Certain Scientific Railgun (Toaru Kagaku no Railgun) in 2009. The second season of Toaru Majutsu no Index ended in 2011 and there has been no news about its season ever since… until now.

This third season is expected to start the story with Document of Constantine Arc from the Light Novel. The length of this new season is still unknown; however, the fact that it does feature World War 3 is a rather interesting premise. So, are you hyped for this next Toaru Majutsu no Index season? 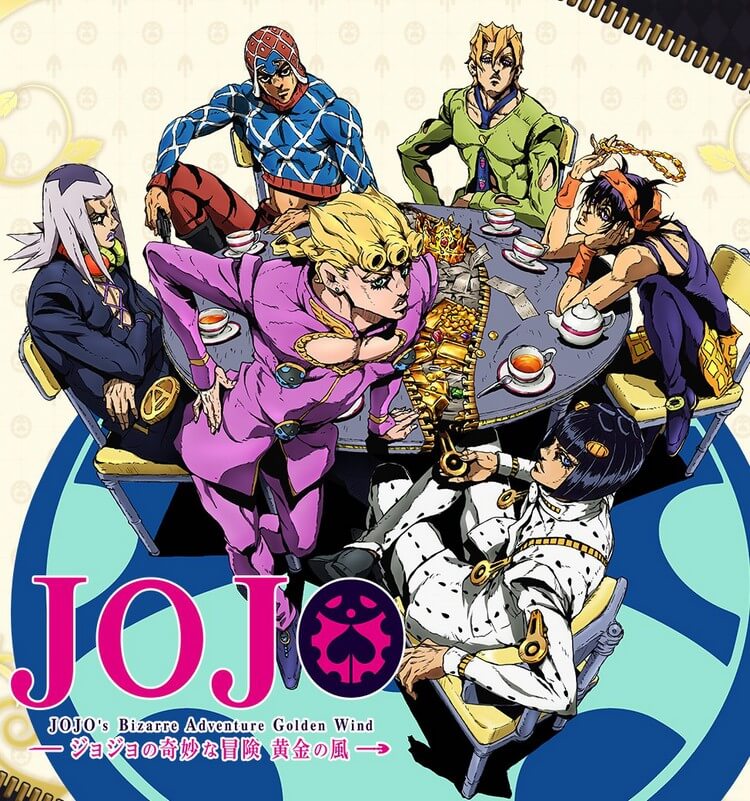 The legendary anime series finally backs on track with its fifth season: Jojo’s Bizarre Adventure Golden Wind (Jojo no Kimyou na Bouken Ougon no Kaze). According to the original manga, the story will continue with Jotaro asking Koichi to come to Naples, Italy to investigate a man called Haruno Shiobana, whose real identity turned out to be Giorno Giovanna. Afterwards, the story turns towards Giorno and focuses on his path on rising to the top of Passione mafia group, thus, making it a mafia band of honor. 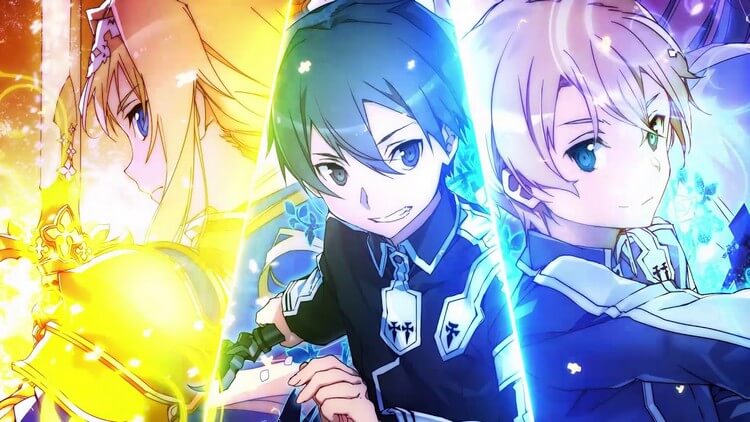 It’s going to be a good year for SAO fans! (Source: Internet)

Now about the anime itself, this is surely the most anticipated Sword Art Online season among the three. Unlike the previous 2 seasons, the light novel version of Alicization Arc is said to have much better writing and far better, darker story. And also one more great news for SAO fans: it is confirmed that Sword Art Online Alicization will be a 4-cour series, which means it will cover the entire Alicization Arc across 48 episodes in total. For this reason, 2018 – 2019 seems to be the good year for SAO fans and remember; the season will commence on Oct 7 so stay tune!

And that’s it folks! Which anime series is/are your most anticipated this Anime Fall 2018 season? Feel free to share with us and for now, thank you and stay tune for more news in the future!