But before we going into the comparison, let’s take a brief look at these two “pony cars”! 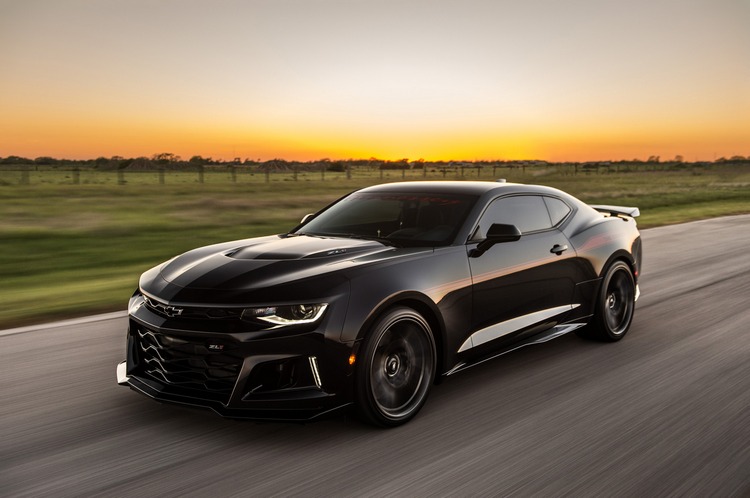 First off, we have 2017 Chevrolet Camaro ZL1, an excellent ride which should no longer be called as muscle car. Despite the upgrade, the ZL1’s exterior doesn’t look much different from previous generation. It still has the familiar look, yet gets toned and scaled down. When being seen from the side, Camaro ZL1 looks quite menacing, especially in dark color. However, if we change our points of view, the ZL1 may seem to be stubby and foreshortened.

In terms of engine, Chevrolet Camaro ZL1 can unleash the 650 horsepower with the 6.2-liter Supercharged V-8 engine. This allows Camaro ZL1 to take 3.5 seconds to boost from 0 to 60 mph, making it the fastest Camaro to date. That said; this supercharged V-8 also puts higher burden on Camaro ZL1 which makes the ZL1 weigh about 3,912 pounds.

In terms of interior, Chevrolet Camaro ZL1 still keeps the back seats; however, the back seats won’t be exactly comfortable. On the other hand, the front seats are comfortable for both driver and passenger. The front seats’ space is also generous enough for driver to sit upright while wearing helmet. 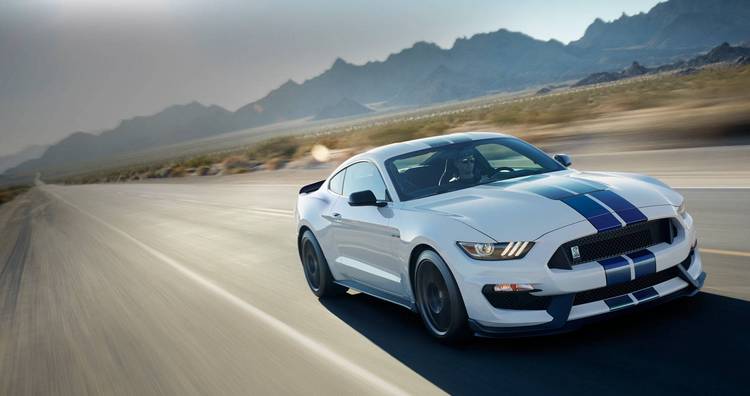 Next, we have the latest 2017 Ford Mustang Shelby GT350R and this guy is highly the best Ford Mustang to date. Since 2015, Ford has always thrived to deliver new changes to Mustang’s exterior, while still be able to preserve the traditional touches. In case of GT350R, what we have is the elegant canopy design on the strong and muscular haunches, despite of some soft details.

In terms of interior, Mustang Shelby GT350R also provides comfortable front seats. Though there are back seats, they are not really that great and seem to be most suitable for children size.

So now that we have taken a brief look at the two rivals, let’s get into the main business: 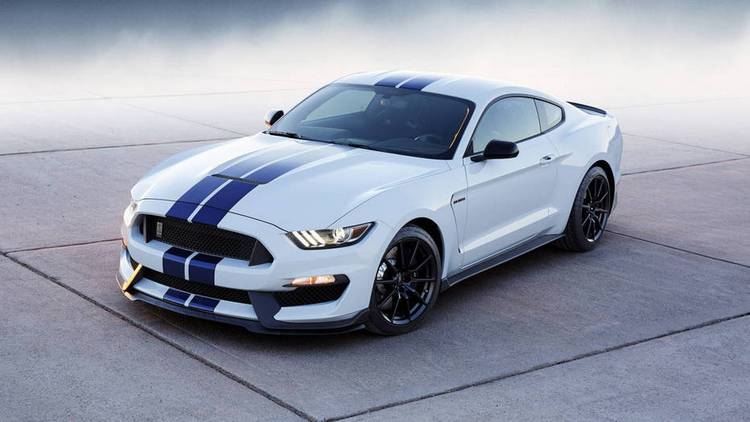 In terms of appearance, Chevrolet Camaro ZL1 still follows the similar design to the previous generation. The greatest touch of Camaro ZL1 is its menacing and imposing look, and definitely this appearance goes extremely well with dark colors. On the other hand, Ford Mustang Shelby GT350R follows modern design while still able to express traditional touches. Shelby GT350R brings out elegant canopy on top of muscular design, providing it a graceful looking. Of course, comparing both cars’ appearance isn’t really legit since it’s mostly subjective preference. However, this time we lean towards Shelby GT350R’s design more than Camaro ZL1. 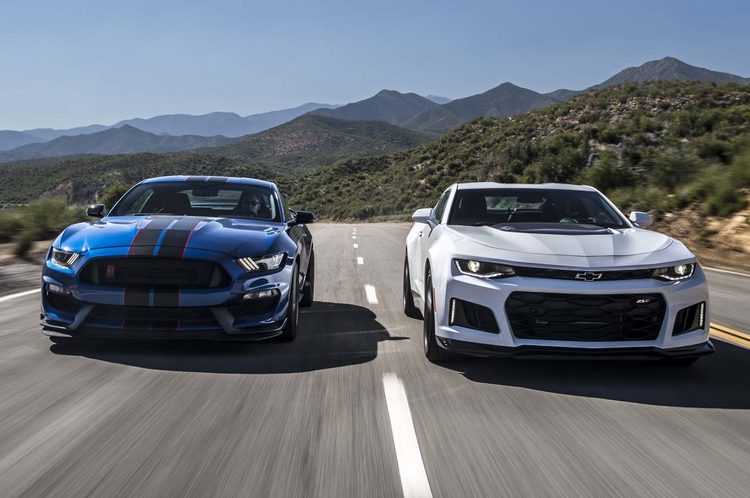 Despite of higher straight-line speed, surprisingly Camaro ZL1 starts to show its flaw when it comes to track testing. When tested on Willow Springs track, despite of the inferior start, GT350R gradually catches up close to Camaro ZL1 after each turn. Based on the test by Randy Pobst, a professional race car driver, Camaro ZL1 completes the track within 1:27.90 sec, which is only 0.39 sec faster than Shelby GT350R with 1:28.29 sec. This shows that Shelby GT350R can still catch up quite close to Camaro ZL1, even though Camaro ZL1 may have faster start.

In overall, Camaro ZL1’s performance is better than Shelby GT350R, but not exactly far more superior especially when on track.

In terms of braking, Camaro ZL1 and Shelby GT350R are quite in even terms. The ZL1 stops in 97 feet from 60 mph, while Shelby GT350R stops in 99 feet. Also, as Jonny cited, ZL1’s brake is much more efficient than its feel. Although Shelby GT350R’s brake feels firmer, overall the point goes to ZL1.

On the other hand, Shelby Gt350R shows that it’s better than Camaro ZL1 when it comes to handling and driving feel. Firstly, while Camaro ZL1’s sound isn’t bad, the sound becomes lackluster compared to Shelby 350GTR. Next, when it comes to handling, Camaro ZL1 shows that its handling is well-calibrated. But in the end, GT350R still wins the day. The handling and driving experience with GT350R feels totally better, including shifting feel, the engine feel, and the brake feel. Therefore, the point goes to Shelby GT350R. 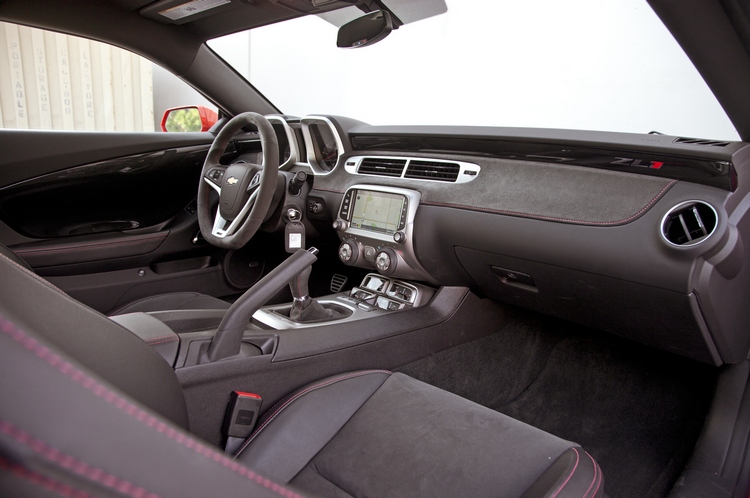 Both Camaro ZL1 and Shelby GT350R have quite excellent front seat. Both feel comfortable, and both don’t have good back seats. In terms of vision, Camaro ZL1 seems to have lack in visibility due to the front wind-shield. Its back view also has difficult vision due to the thick pillar. On the other hand, Shelby GT350R has better front view, while its rear window view starts to show weakness. For people who are not used to rearview camera, rear window view can be a problem. Luckily, both Camaro ZL1 and Shelby GT350R features rear park assist, and therefore, parking isn’t really a big issue.

Overall in terms of interior, ZL1 and GT350R are pretty much close, though GT350R has a slight better advantage in terms of front-view.

In terms of safety, Camaro ZL1 and Shelby GT350R both score equally well in IIHS test. However, Shelby GT350R gained an upper hand on this one since it also ranked 5 stars in NHTSA test. Also, Shelby GT350R’s safety technology gives a higher advantage over Camaro ZL1.

*To see these two rivals in action, check out this video by Motor Trend for better comparison. 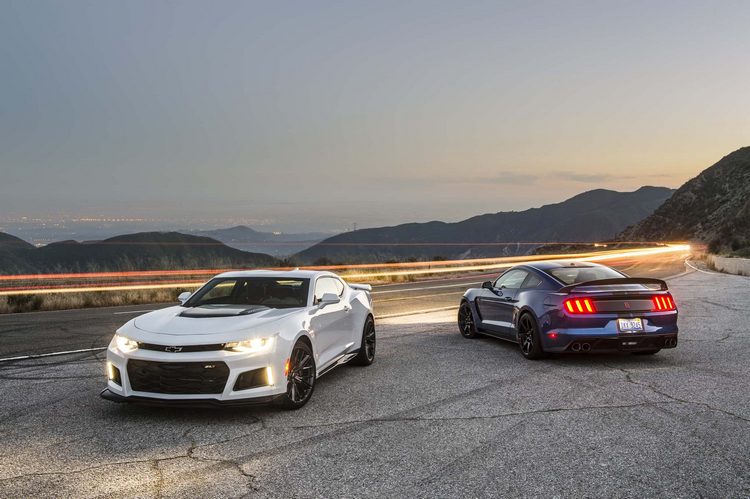