Among all the heroes of DC Comics Universe, honestly speaking Aquaman a.k.a Arthur Curry is kind of… underwhelming compared to many other prolific names like Batman, Superman, or The Flash. Even in DCEU landscape, we have never seen a proper Aquaman film before (except the 2017 Justice League film but it did not exactly show all of Aquaman’s charisma). But on this December 2018, the world finally got to see the hero’s very first debut: 2018 Aquaman. So is this film good? Can it overcome the “curse of DCEU film quality”? Let’s find out! 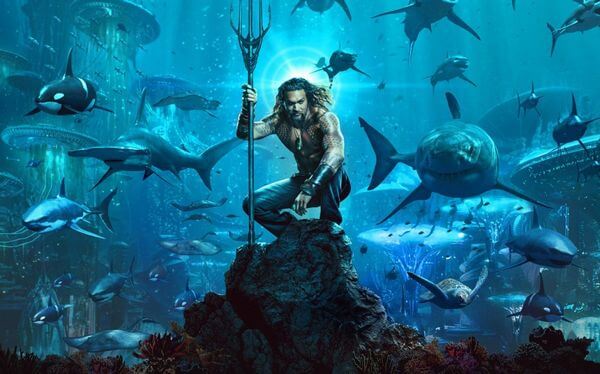 The Emperor of the Sea is back! (Source: Internet)

The 2018 Aquaman is the latest DCEU movie to date which has just released on December 21, 2018. It was directed by James Wan, featuring Jason Momoa playing as none-other-than the man himself – Arthur Curry a.k.a Aquaman, along with the cast including Amber Heard as Mera, Patrick Wilson as Orm the Ocean Master, and Yahya Abdul-Mateen II as David Kane the Black Manta.

The film aims to tell the origin story of Arthur Curry since his childhood and later on, his quest of stopping his brother Orm’s ominous plan. Yet at the same time, he also has to face one of the biggest nemeses of his life: Black Manta.

If you have read comments and reviews for this movie throughout the Internet, you will see that there are quite a number of different opinions. Some say this is a bad, cheesy, and cringey film, while many others think that this film is really enjoyable and fun. And in our opinion, this movie has lots of fun in it and we believe it is a great DC film of 2018. So here’s our thought about Aquaman 2018!

For those who have been following DC Comics, you will know that Aquaman 2018 is not an easy movie to make. The problem is that: Arthur Curry a.k.a Aquaman is a superhero of the Seven Seas, which means his story mostly involves underwater environments. This is especially difficult when bringing this character to the screen since the film-maker will have to depend on CGI. And as we already know: CGI scenes are extremely easy to be screwed up.

Unfortunately, James Wan really understands what he is doing with this movie. It throws in tons of CGIs with no compromise, and they actually look fantastic. If you are like us who enjoy the Aquaman trailers, you can expect some really incredible scenes throughout this film, especially the CGI underwater world. Everything visually looks stunning and vibrant with colors, which really puts us in awe because recreating underwater world with beautiful CGI is no trivial matter. But they finally nailed it! And to be frank, you may feel kind of… weird at first when watching all the CGIs. Yet, there is no need to worry because eventually, you will get used to them and reach to the point of appreciating their efforts of building a CGI world. 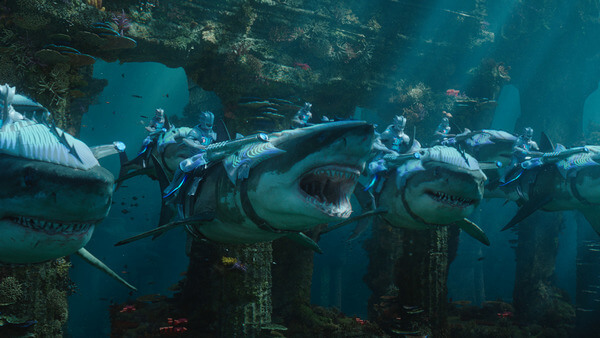 Shark-rider is not the only “ridiculous” thing you will see. (Source: Internet)

And talking about CGI, you will have to ready for many over-blown, over-the-top stuffs throughout the film, including some hilarious stuffs like octopus playing drum? But before you may think that it is really stupid in a bad way, let’s remind us all that such scenes are intentional. James Wan purposefully wanted the film to go in this direction. If we can get over all of such over-the-top elements, we say that this movie’s visual is really well done in terms of visual, along with great sound and music.

As we mentioned, this film has got lots of different reviews and comments. But from our perspective, this is a really good DCEU film. It has flaws, it is the best DC film of all time but nonetheless, it is absolutely fun and enjoyable all the way through and that was what James Wan aimed at the first place. 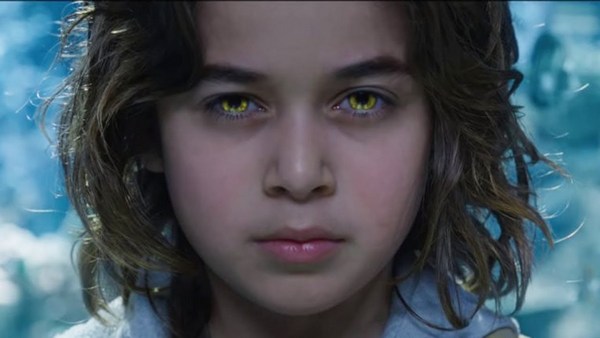 In terms of story, to be honest it is rather… plain and simple. It adapts the traditional superhero trope of a rightful heir who does not care about riches and power, yet he still returns to his kingdom nonetheless to fight against his brother who has “nefarious plan” of ruling the world. There is no significant twist or turn. Also, it feels like having a pacing issue especially during the “supposedly emotional” moments. For example, in the beginning of the film we felt like they wanted to fresh out Arthur Curry during his childhood a little bit more. However, there are not much scenes to depict more of his personality and how people think about him. Fortunately, the film starts to pick up its pace afterwards and it only gets more fun onward.

This also leads to another downside of the film: viewers can hardly feel the emotion during certain scenes. We can only feel like: “is that supposed to feel emotional?” And even if we felt something, it was quickly washed away with more fun actions. 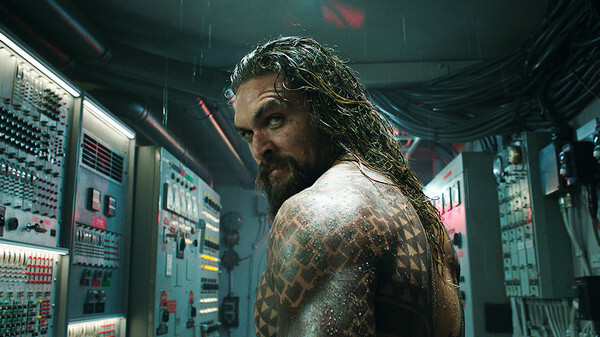 In terms of characters, first of all we really enjoy Jason Momoa’s acting as Aquaman. He is really into the character and we can tell that he really has fun with it. Jason Momoa’s Aquaman looks charismatic and he is truly the star of the film. They also managed to make him feels badass and powerful. This gives the film a bonus score since comparing to other DC Comics heroes, Aquaman is somewhat underwhelming. We also like the fact that Aquaman in this film is not a perfect man. He does lose in battle and he actually loses a lot. But such defeat does not stop him and thus, he grows further into a truly badass emperor of the sea.

Other characters like Mera (played by Amber Heard) are also enjoyable; however, we wish that they could have depicted more of their personalities. Take Mera as example, in the comics she was presented to be an Atlantean who did not like humankind on land. But in this film, such characteristic was not showed properly since it only gave us a notion that “she hated land-walkers”. 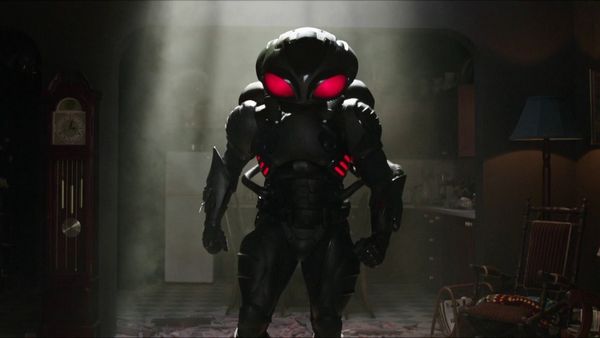 Black Manta is here! And he is not here to have fun! (Source: Internet)

We also have a slight problem with the film’s two villains: Orm the Ocean Master and Black Manta. To be fair, both villains have great visual and they both feel cool. However, we don’t think they have proper screen-time, especially Black Manta. From our perspective, we think it could be better if they only focus on one villain either Black Manta or Orm, then leave the other for the next sequel. 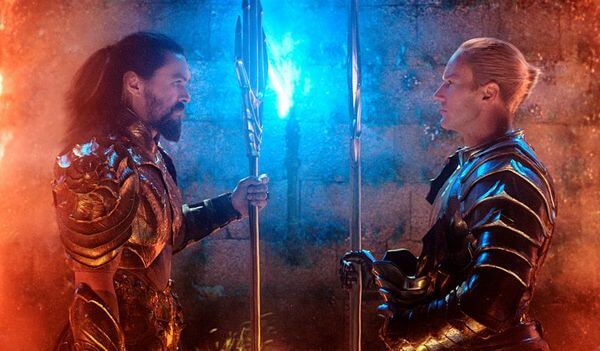 That being said, for some reasons we feel like such simple story structure was intentional in order to fill in tons of entertainment values. This film is purposefully filled with lots of overblown, over-the-top stuffs throughout the entire time with no holding back. It includes lots of actions and we have to say: this film probably has the best action scenes and choreography we have ever seen. The actions are non-stop and they look extremely fantastic. All the fighting scenes also look unique; its choreography is vastly different from many previous superhero films thanks to its underwater setting. 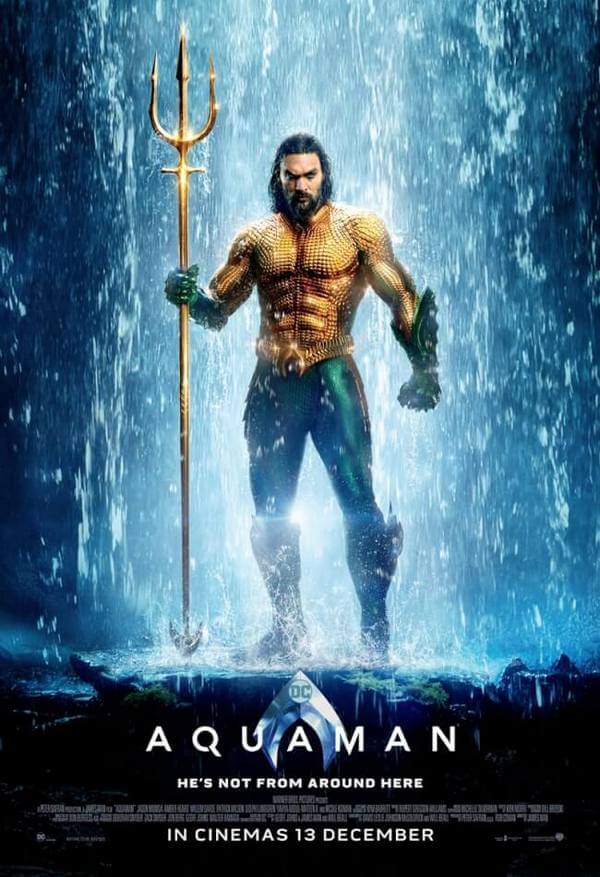 Overall, Aquaman 2018 is an action-packed, entertaining film which can be silly at times, but that is how the film is intentionally directed. Whether this film is good or not, it depends a lot on your expectation for it. If what you seek is a serious film, you will find this film to be cheesy and disappointing. But if you can accept for what this film really is, you will have lots of great fun with it. For us, it is truly entertaining to watch and considering the aim of the film, we would give Aquaman 2018 a 7.5/10!

And what about you? What do you think about Aquaman 2018? Feel free to share with us and for now, thank you and stay tune for more news in the future!

One thought on “The Emperor of the Seven Seas is back: 2018 Aquaman Review!”