E3 2018 is not really an all-out success considering the presentation aspect. But, what truly matters is the games showcased and needless to say, E3 this year is like blast with tons of big names like The Last of Us Part 2, Halo Infinite, Ghost of Tsushima, Death Stranding, and Sekiro Shadow Dies Twice. And, probably many people will agree on this, the most impressive and hyped game of E3 2018 is definitely Cyberpunk 2077. The trailer is outstanding and the exclusive gameplay demo no doubt has wiped away all the doubts about the game. Unfortunately, we still haven’t received any info about release date yet. For now, let’s check out everything we know about Cyberpunk 2077 so far! 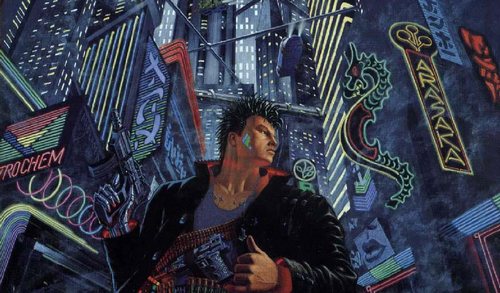 Have you tried Cyberpunk 2020? (Source: Internet)

Cyberpunk 2077 is based on the legendary role-playing boardgame Cyberpunk 2020 written by Mike Pondsmith and published by R. Talsorian Games back in 1988. It brings players to the fictional Night City in United States in the future where mega corporations have taken control of the entire place, ignoring any law and rule.

The game heavily focuses on skill-based combat rather than level-based combat, which means players get to level up many skills available to overcome different challenges. The futuristic theme is incredibly high here, including high tech weaponry, cybernetic augmentations andbody modifications, and even performance-enhancing drugs and recreational drugs.

If you have already played Cyberpunk 2020, you will probably have an overall idea of what’s Cyberpunk 2077 going to be… or sort of… Interesting note though, Cyberpunk 2020’s author – Mike Pondsmith himself – is currently working with CD Projekt Red on the game. Even Mike admitted that he was extremely impressed with what CDPR has done. Therefore, we have all right to put our hope onto CDPR and this ambitious game.

Yes, it is confirmed to have first-person perspective 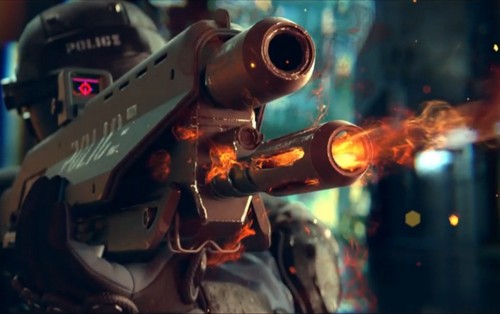 First-person perspective confirmed, but not in the way you think. (Source: Internet)

First off, let’s clear up some misunderstandings! No long ago, there were some rumors saying that the game will have first-person perspective (FPP). Turned out, such rumor was true and it greatly disappointed lots of players.

We understand why players got so disappointed, but here’s the thing, the developers explained that they have experienced with both third and first-person perspective. Eventually, they believed that first-person perspective works best with the game and this is not far from the truth. Many people who had opportunity to watch the exclusive gameplay demo at E3 2018 (like AngryJoe or YongYea) confirmed that it was truly incredible. It really helps players to immerse themselves into this awesome world CD Projekt Red has built.

Aside from that first-person perspective rumor, there was another misleading info saying that the game would be a FPS game with RPG elements. To be clear, this is absolutely not true. It is confirmed that the game will still be a true RPG but with FPP.

The main protagonist will be a mercenary called V 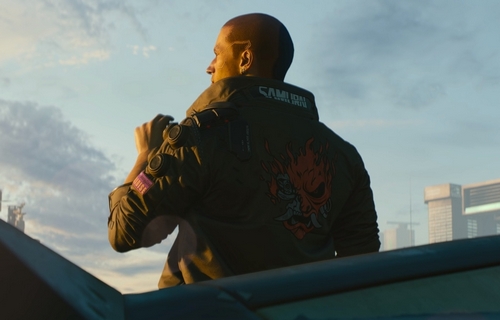 Players will get to control main protagonist called as V – a cyberpunk, augmented warrior who readies to take any dangerous job for money and fame. The game will begin with character customization panel where players get to create their own protagonist, unlike The Witcher 3 which focuses on Geralt of Rivia.

Interesting enough, both male and female protagonists will be fully voice-acted. After body customization, players continue to choose their character’s backgrounds and everything will be good to go. 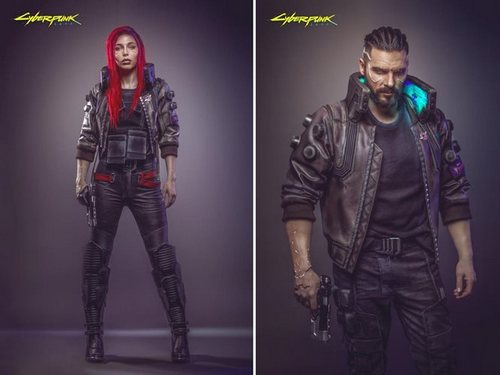 So far there are 6 confirmed attributes in Cyberpunk 2077. To be honest, we still don’t how each attribute will affect gameplay, but we will try to explain them based on the Cyberpunk 2020’s info.

Aside from those 6 attributes, there is also a stat called Street Cred which determines V’s popularity in the city. With higher Street Cred, V is expected to be able to access more areas, vendors, NPCs, and quests. 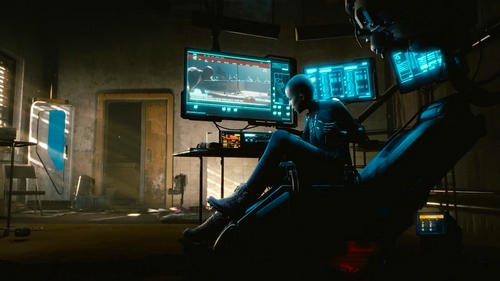 In terms of classes, there are 3 confirmed basic classes:

Cyberpunk 2077 promises a fluid class system in which players are not bound by any class. It is more like different skill trees and players can combine different skills and abilities to create their own class. For example, we can be an all-out Solo, or Solo-Techie hybrid, or combination of all 3 classes. In Cyberpunk 2020, there are also other classes like Rockerboy, Cop, or Corporate. We still don’t know whether CDPR will add them into the game or not. And if they do, we imagine it can be something like sub-classes, which players can learn from respective factions, in addition to the core 3 classes.

It has fast-paced combat 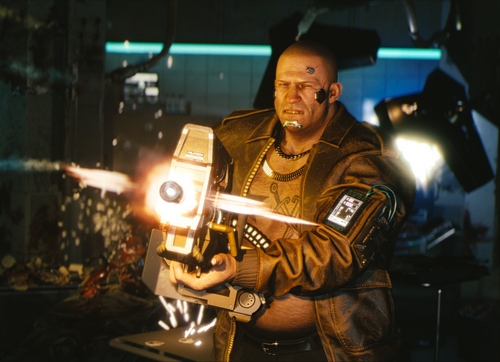 Grab your big gun! It will be a bumpy adventure! (Source: Internet)

This one is stated personally by CD Projekt Red. Basically, we can expect something similar to Deus Ex in which players can quickly dodge, take cover, dash around along with shooting. Damage number will pop up when shooting at enemy. And while players will not be able to destroy everything in the game, they can actually damage certain things like windows or even people’s limbs.

Guns have different perks and each gun type can do fascinating stuff like ricochet bullets or homing bullets. Aside from gun, V personally has 2 blades equipped on the 2 arms to climb wall or slice enemies (like the woman from the first trailer).

And of course there will be different cybernetic augmentations. For example, in the gameplay demo, V will meet a doctor named Victor (or Vic for short) to install a Cyberware called optical scanner. It is reported that there are also many other Cyberwares to choose from, provided that we have enough money (specifically Euro-Dollar in this case). During combat, players can also use some sort of tonic which dramatically increases character’s speed, making everything else looks like slowing down.

Its open world is huge, and breathtaking! 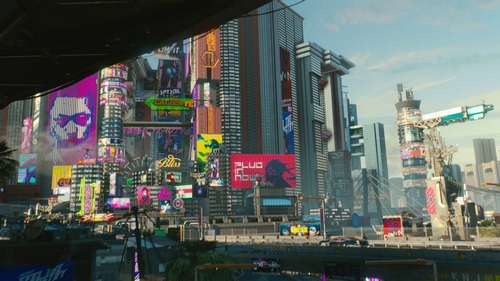 Similar to Cyberpunk 2020, the game will take place in the same Night City of United States. According to V from the E3 2018 trailer, this city is the most chaotic place of all America, a land controlled by mega corporates and the poverty rate is dramatically high. However, it is also the city of dreams where freelancers, mercenaries, dreamers from everywhere seek for money and glory.

It will be an open-world, yet unlike anything we have seen before. In The Witcher 3, we also got to experience a huge, gorgeous open-world, but it is simply a flat world. On the contrary, Night City will still be a huge open-world, in vertical way. It is said to have tons of skyscrapers and mega buildings where players can travel to different floors. There will be 6 districts in total, each filled with dense contents. This city is supposed to be lively and interactive with plenty of quests and dialogues. There are also day and night cycle, and weather system. Of course, we will need some sort of vehicles to travel this humongous world like sports cars (like the one V drove in the trailer) and motorbikes. The iconic air vehicle – Aerodyne will also make appearance in game but sadly players will not be able to control it.

Overall, the world feels like GTA, Skyrim, and Deus Ex combined together, which is mind-blowing if they can manage to pull that out. And to more of our surprises, there will be no loading screen, which is even more mind-blowing given the size of this game.

The Witcher 3 did have romance. Why not this time? (Source: Internet)

One thing people kept asking CD Projekt Red is that: will the game include romance element? Delightfully, they have confirmed it to be a big yes. There are different romance options in the game, both male and female, and homosexual (which is highly so). And before someone ask, yes! There will be huge adult tone in this game including nudity and sex.

Yes, there will be nudity and adult elements

Yup, there will be nudity. (Source: Internet)

Yup folks! Nudity for real! Okay to be serious, Cyberpunk 2077 aims at mature themes so such adult elements are not surprising. Even in The Witcher 3, it openly includes sex scenes and brothels. Back to the original Cyberpunk 2020, Night City is already described as a corporation-controlled place and it filled with all kinds of people, including the worst ones. Obviously, Cyberpunk 2077 will try to bring all of those themes in. Swear words are expected to be heard everywhere, and full of vulgarity. This game will definitely have an R+ rating upon release so… parental advice!

There will definitely be compelling storyline and missions 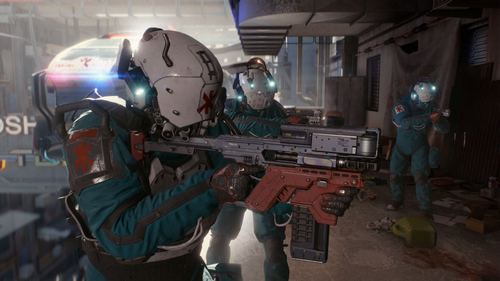 The Witcher 3 is not only successful only due to its fascinating open-world, but also its compelling stories. There are so many interesting quests to do with many intriguing choices and outcomes. Cyberpunk 2077 also promised to deliver the same compelling quest system. Players will have different approaches to finish a quest, and depend on players’ choice, the outcome can vary greatly. CDPR has already shown this with the E3 gameplay demo in which players have to retrieve a box from a gang for a company. This quest already features tons of options, from straight-forward fighting to death, or diplomatic way. And remind us all that this is only sub-quest.

There will be DLCs, but expect no less than The Witcher 3 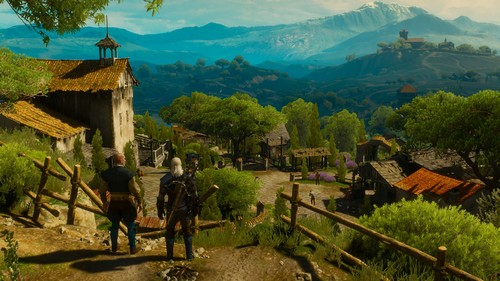 “This gonna be huge!” (Source: Internet)

Finally we have a question which has been asked numerous times: will there be microtransaction? The answer is a big no! CD Projekt Red once openly shared on their Twitter that there will be absolutely no microtransaction in single-player game like Cyberpunk 2077. And when players asked about DLCs, they also replied that we can expect no less than The Witcher 3. The Witcher 3 offered a full base game with completed beginning and the end, free DLCs like outfits and hairstyles, and 2 outstanding expansions Hearts of Stone and Blood and Wine. Cyberpunk 2077 will also be just as awesome, if not even better.

And that’s it folks! What do you think about Cyberpunk 2077 so far? Feel free to share with us and for now, thank you and stay tune for more news in the future!

One thought on “Everything we know about Cyberpunk 2077 so far!”