Spring 2018 has been a great season for anime community so far with lots of good shows like Boku no Hero Academia 3rd Season, Steins;Gate 0, Wotaku ni Koi wa Muzukashii, or Megalo Box. So coming to this next season Summer 2018, what good news is in store for us? With no further ado, here are the top 10 Most Anticipated Anime Summer 2018! 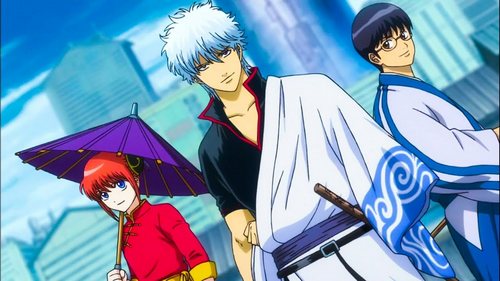 Gintama Gin no Tamashii-hen, or Gintama Silver Soul Arc, is final and also the most exciting Gintama season so far with a nice combination between seriousness, actions, and humors. As Utsuro revealed his genocidal plan to kill himself and the entire Universe, the Yorozuya, their friends and even enemies on Earth have to unite if they want to stop this madness. There is clearly a high level of action and gore here. But somehow the show still managed to bring in some funny moments (in Gintama style of course). With such great season 1, we definitely have all reasons to anticipate for this 2nd season.

9. Free! Dive to the Future

The handsome boys of Iwatobi High School Swimming Club, including Nanase Haruka, Tachibana Makoto, Matsuoka Rin, Hazuki Nagisa, and Ryugazaki Rei, have finally returned with their 3rd season Free! Dive to the Future. It will be their third year (and also final year) in high school. Each of them will also have future plan of their own and those plans don’t always align. With lots of expected events awaiting them, will they overcome such difficulties and differences? Or will they sink under the pressures? We will soon find out on Jul 12, 2018.

For those who are not into indie games, this one may slip under your radar. Satsuriku no Tenshi is originally an adventure-horror game made by RPG Maker. It quickly becomes extremely popular in Japan thanks to its compelling story and psychological horror element. The story tells about a 13-year-old girl named Rachel who awakes in a strange building. And strangely enough, she cannot remember anything about her past. While finding a way out of this building, she encounters a young man named Zack who wields a freaky scythe. After certain “issue”, Rachel and Zack decided to group together in order to escape this place. To be honest, playing a horror game can be intimidating. But fortunate enough, anime lovers can enjoy the interesting story of Satsuriku no Tenshi in anime soon on Jul 6, 2018.

It’s Summer 2018 and indeed we have quite a lot of water-themed anime this season. Aside from Free! Dive to the Future, here we have Island, an anime based on a visual novel of the same name. It tells the story of an island called Urashima which is located far, far away from the mainland. The island may look like a paradise from outsiders’ eyes, but in fact, the island’s denizens are being stuck with long and complicated traditions. Suddenly one day, a young man named Setsuna appears and claims himself as a “time traveler“, yet he loses all of his memories. Here he met 3 young girls Rinne, Karen, and Sara. Together they will change this island and discover secrets lurking within this place, as well as the forgotten memories. For some reason, Island really, really sounds like a “harem anime” but that should not be a huge problem… if feel. Studio do it right. But hey! The original visual novel itself was quite well-received so we can hope for its anime’s quality, right?

Coming in number 6 we have Tenrou Sirius the Jaeger, an original anime comes P.A. Works Studio. According to the synopsis, the anime will take place in the Imperial Capital of 1930 where a group of vampire hunters called Jaegers arrived on Tokyo Station. Interesting enough, all members equip with musical instrument cases, believed to hold the weapons to hunt vampires. Among those Jaegers there is a stand-out young boy named Yuliy, an actual werewolf who had his homeland destroyed by vampires. Together, Yuliy and the Jaegers are destined to fight against the mysterious holy arc called as the “The Arc of Sirius” without knowing the truth hidden ahead of them. So far, the anime’s synopsis already got us interested. And since this is made by P.A. Works – the same folks behind famous anime like Angel Beats, Another, and Charlotte, the hype is definitely going high for this one.

If you are into manga, probably you have already spotted this one from miles away. Grand Blue is an original comedy manga about an Izu University freshman named Iori Kitahara. He dreams of a fantastic college life with beautiful girls and good friends. He comes to live at his uncle’s diving club shop called Grand Blue and soon, all of his dreams are swept away as he witnesses a bunch of naked upperclassmen and their “corrupted lifestyle”. Such is the “sad fate” for Iori, but it also opens new opportunities for him. Iori and friends will arrive on Jul 14, 2018 so do not miss them if you’re fan of comedy anime.

As you can guess from the poster, yes it is a harem/ecchi anime originated from the manga of the same title. In short, it tells the story of a high school boy named Kogarashi. He had a long history with ghosts and other spiritual events, which eventually make him an extremely powerful, yet… homeless young man. As he arrives at his new “home” called Yuragi-sou – a former hot springs inn, he soon found out that this is the living place of many, many beautiful girls. Here he also met Yuuna, a beautiful teenage girl ghost. Feeling sympathized with her problem, he promised to help her to finally be released from this world of the livings. Will he succeed? Who knows? But more importantly, we will get to see lots of harem – ecchi moments throughout the show.

FLCL Progressive is definitely among the most anticipated original anime this summer 2018. The first FLCL was released back in 2000 – 2001 and the series was a huge success. It gained lots of awards like being 3rd place for the Best Animation Film at the Fantasia Festival 2003; gaining a nomination for Best Cast in 2007; and being winner of the Best Comedy Series and the Best Short Series at the American Anime Awards show. With such feats, it pretty showed us how highly anticipated this next sequel is. The show is going to kick off soon in Jun 3, 2018 so let’s not miss it!

For many viewers, the previous Overlord Season 2 had quite a boring start with the Lizardmen Arc. But fortunately, the show managed to get better and better towards the final episodes. Nonetheless, the hype for Overlord Season 3 is still running strong and no doubt it will get tons of attention. It will take place right after the last The Men in the Kingdom Arc back in Season 2. What we can expect from this third season? Well, more plotting, our favorite Nazarick characters in action, and especially our “hot boy” Ainz-sama. Let’s hope that we will get to see The Magic Caster of Destroy Arc because that arc is AWESOME!

The season 3 of fans’ favorite Attack on Titan series is coming soon and it follows right after the epic final episode of Season 2. After Eren “showcased” his Titan control ability, Eren is kept hidden away under Levi’s supervision, while Hange tries to do some experiment Eren’s Titan power. However, their plan will not stay safe especially when they started to find out a huge secret behind everything. For fans of Attack on Titan series, this third season is definitely not something they want to miss out, especially when there will be lots of twists, epic moments. So, remember to join the Survey Corps again on Jul 23, 2018!

And that’s it folks! Which anime summer 2018 is/are your most anticipated? Feel free to share with us and for now, thank you and stay tune for more news in the future!