It is now the year 2020, which marks a new decade of 2020-2030. It also means the new era of anime, including new stories, new inspirations. But everything has to come from somewhere and so, it is a good time to look back and honor some of the anime series & movies which helped to shape the everchanging anime world nowadays. So with no further ado, here are the Top 10 Most Influential Anime of All Time! 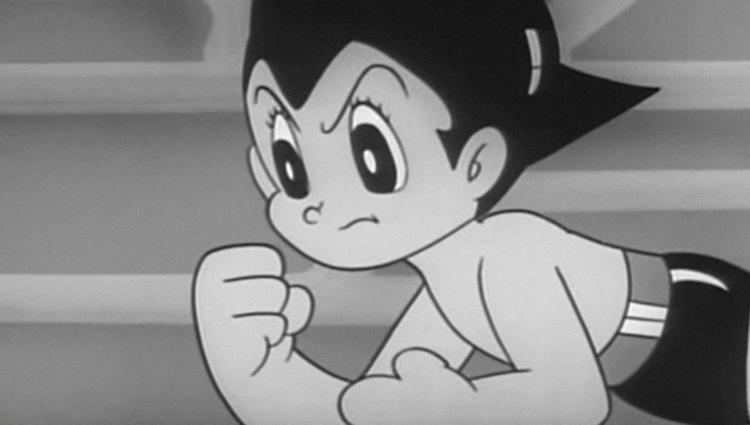 Even anime originally came from somewhere: manga! And if we talk about the early days of manga, we have to mention Osamu Tezuka – the God of Manga himself! Frankly speaking, most of the anime adaptation of Mr. Tezuka’s works can be put into this list. But this time, let’s take Astro Boy as the prime example since it got arguably the first anime series on TV.

Astro Boy told the story of a sentient robot boy named Atom, created by Professor Tenma out of his grief for his lost son. Yet, Atom got abandoned by his creator and was sold to a ringmaster. It was not until another professor named Ochanomizu who rescued him and taught him how to use his power for good.

The manga was first serialized in 1952, and 11 years later, it got adapted as an anime TV series in Japan. While Astro Boy was not exactly the first anime ever, it was widely recognized as the first anime series to have its own 30-minute show on TV. Needless to say, the series pioneered the concept of Japanese animation on TV which kickstarted the whole anime industry later on. 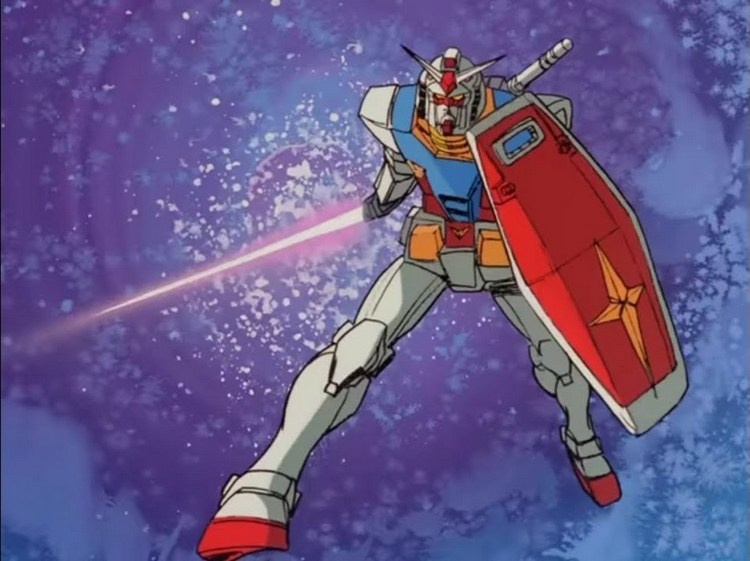 It is not an exaggeration to say: Gundam gave birth to the insane popularity of giant, flashy, cool-looking robots trend in entertainment industry nowadays.

Starting in 1979, the first TV series of Mobile Suit Gundam made by Studio Sunrise was the first anime show to conceptualize the simple idea of piloted humanoid robots. It actually revolutionized the “mecha genre” which we often see nowadays, including the mass hit like Neon Genesis Evangelion to the later anime generations like Code Geass or Darling in the Franxx.

Interesting enough, Gundam itself has not lost its popularity one bit. Notably, we can still a huge community of Gundam model fans nowadays. And let’s be honest, all Gundam models look pretty darn cool! 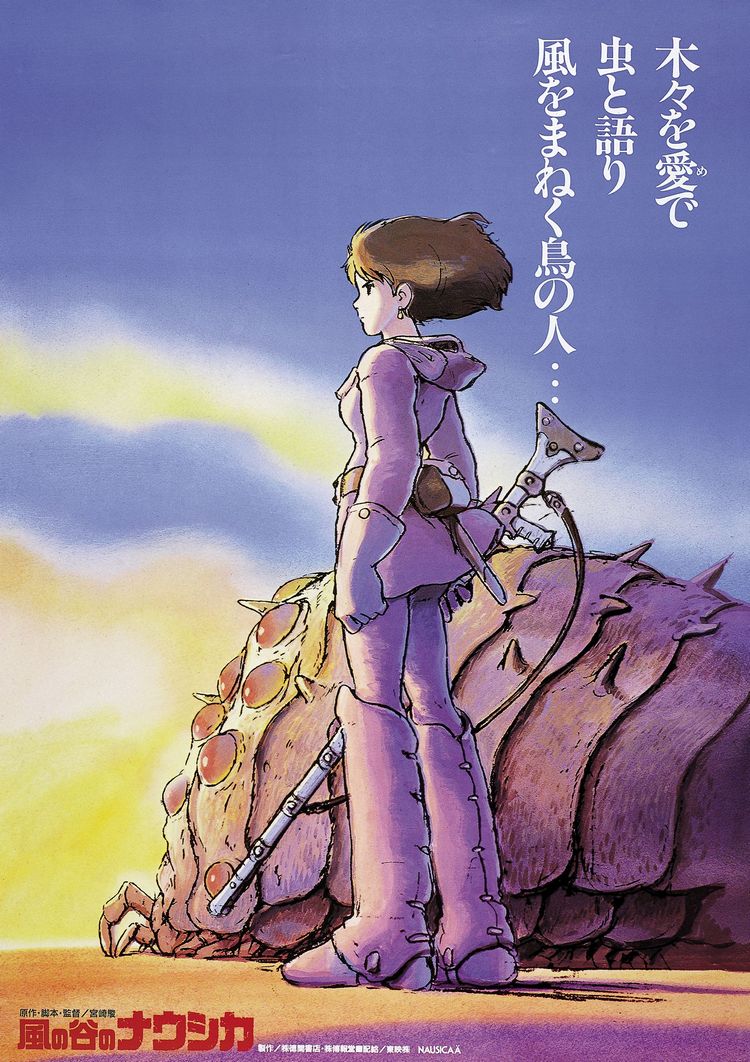 Nausicaä Of The Valley Of The Wind 1984 (Source: Internet)

Many people would mistake Nausicaä Of The Valley Of The Wind as the first Studio Ghibli anime. However, this anime actually predated the foundation of Studio Ghibli.

It was written & directed by the famous Hayao Miyazaki (of course) and produced by his good ol’ friend Isao Takahata. And also, it was their first collaboration with Joe Hisaishi, who was later on a veteran composer for Studio Ghibli.

Being made in 1984, Nausicaä Of The Valley Of The Wind was an extremely beautiful anime, which was on top of its game back in the days. It was also the first anime that gave hint to us of Studio Ghibli’s art-style. The anime itself also had a fantastic story: it dealt with a serious theme, yet approachable for people of all ages and delivered deep meaning & real-life lessons to learn form. Which of course, also inspired the storytelling style of future Studio Ghibli titles. 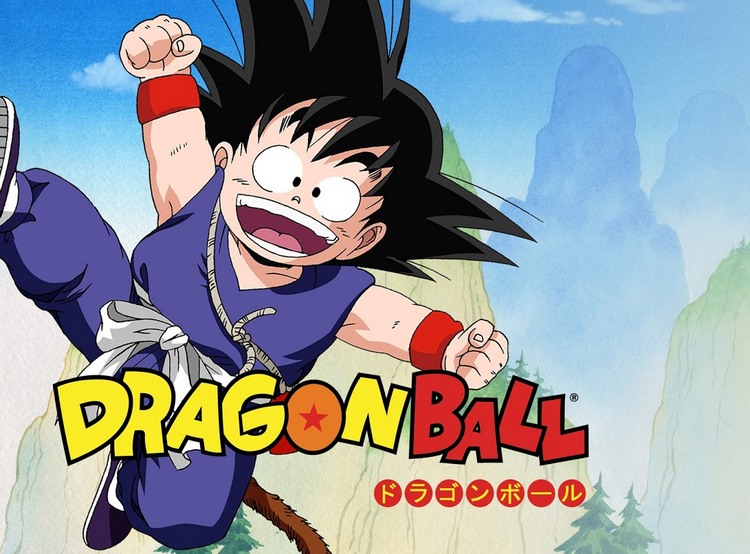 Dragon Ball is internationally recognized both in Eastern & Western worlds, so obviously we would get to see it eventually on this list.

First appeared in 1986, the first Dragon Ball anime season inherited everything learned from its anime predecessors and pioneered the trend of shounen anime we had nowadays. The classic story of Son Goku came to life and quickly caught both Eastern & Western audiences by storm. Even many people born in the 80s & 90s considered this series to be their childhood, which pretty much tells us how influential this series on their life.

Aside from Dragon Ball, there are many other anime series that can be on the same spot like Naruto, Bleach, One Piece, etc… But given the popularity and the age of this long-time series, it is only fair to let Dragon Ball represent the greatness of the shounen genre. 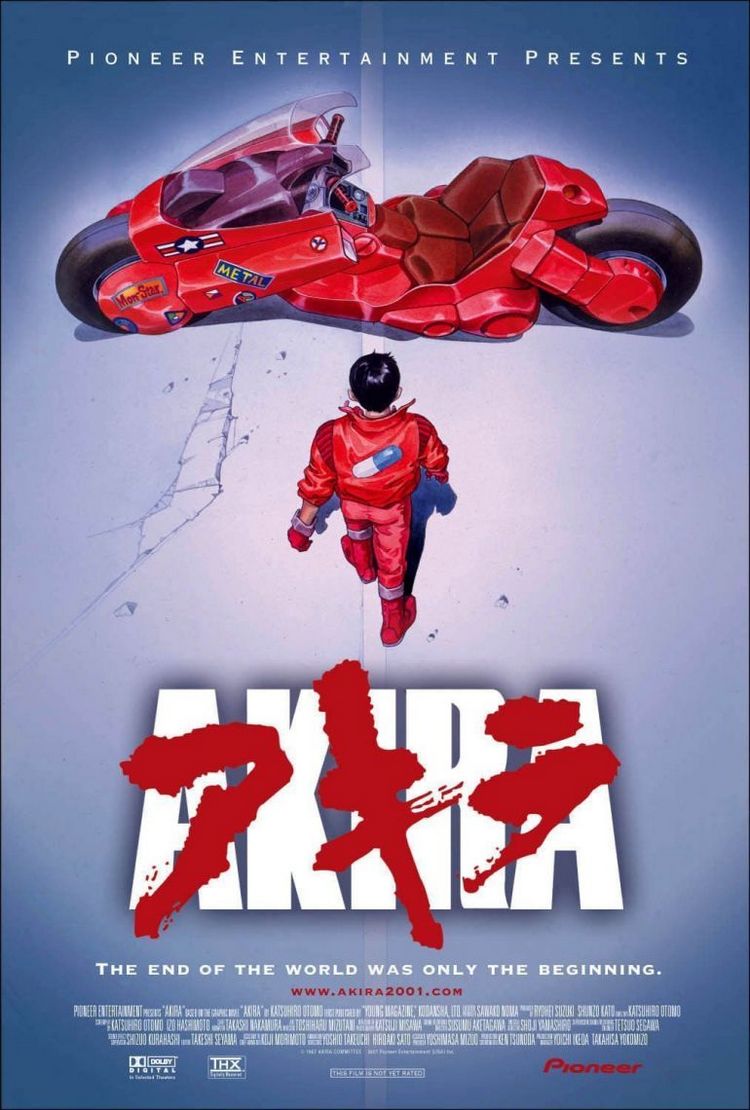 There was an curious impression (to say the least) about anime, saying “anime is for kids.” While this might be true to a certain extent, the appearance of Akira movie totally made such impression obsolete.

Released in 1988, Akira brought audience to a dystopian, cyberpunk world of Neo-Tokyo which became a haven for crimes. Among the various gangs roaming the streets of Neo-Tokyo is the capsule gang, led by Shoutarou Kaneda. One night, the gang gets into a fight with a rival gang. And amongst the chaos, a psychic escapee from a government facility causes Tetsuo Shima, a friend of Shoutarou, gets caught in and somehow he develops his own destructive psychic power which the government tries to control.

Even to this day, Akira is undoubtedly one hell of a wild ride. Not only it showed how technologically advanced anime could be, but it also clearly represented a mature, deep story in the form of “kid medium” called anime.

“Magical girl” trope is quite a common thing nowadays with loads of anime shows like Puella Magi Madoka Magica, the Precure franchise, and more… But again, everything comes from somewhere and in this case, it was Sailor Moon.

The anime told the story of Usagi Tsukino, an ordinary schoolgirl with a rather… ordinary school life. Yet, her life forever changes when she rescues a cat with a strange crescent moon symbol on its head. Thus, she discovers that she is destined to be Sailor Moon, the galactic guardian whose mission is to protect the Earth from the evil forces. And so, she goes on a journey to find the lost princess of the moon and her fellow guardians.

Although Sailor Moon was not exactly the first “magical girl” anime (that honor actually belonged to Sally the Witch released in the 60s), it was what kids in the 80s – 90s familiar with the most. Gradually, the series has grown huge popularity and made its trope much, much more popular later on.

(But seriously though, many male viewers of Sailor Moon did have a crush on these girls at some point!) 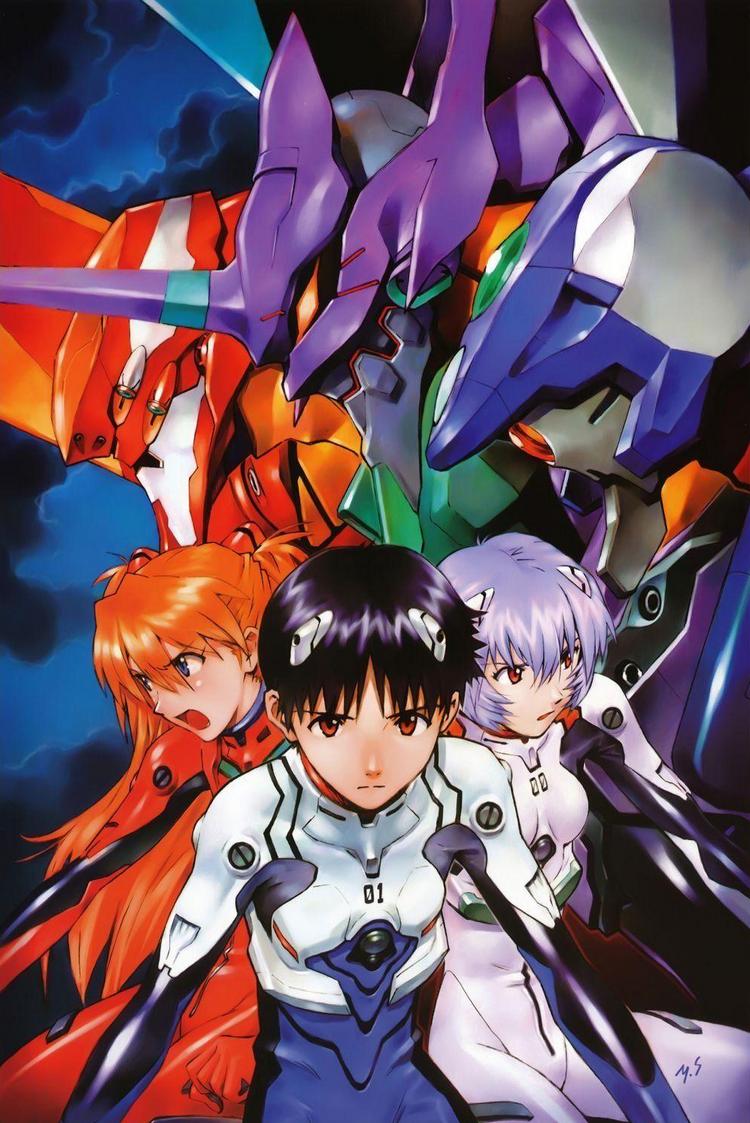 Around the 90s, Japan also got hit by the economic crisis and unless you were a huge corporation like Nintendo, any business could become extinct, including the anime industry. Now, many people would be surprised because there had been some great anime in the 90s. But the problem was: the majority of anime series (especially on TV) was rather poor. And here’s when Neon Genesis Evangelion came into play.

First released in 1995, this anime literally saved the entire anime industry thanks to its tremendous success in both Japan and the outside world. Literally, any anime viewers will at least know the name even if they have not watched it yet (though frankly speaking they should!). It was such a massive hit in both terms of commercial & cultural aspects that it affected the entire anime industry and even, the pop culture around the world.

The only downside was its ending, which unfortunately had to be rushed due to budget issues & its creator – Hideaki Anno’s mental health. And the funny thing is: it also gave birth to the term “Gainax ending” which often refers to the nonsensical ending (normally it only happened when a series was forced to end too soon). 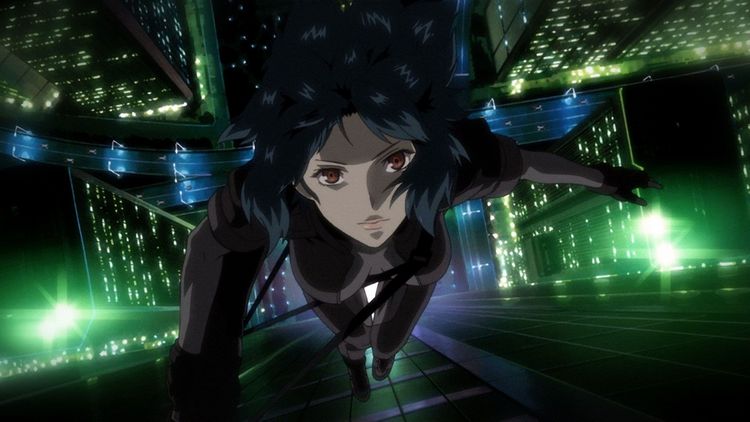 Talking about influencing pop culture around the world, most of us must have at least heard some of the famous movies & films like The Matrix and Avatar. But what some of us may not know is that: those movies (The Matrix & Avatar) partially inspired by an anime movie called Ghost In The Shell released in 1995.

Like Akira (1988), Ghost In The Shell’s story takes place in a cyberpunk version of Japan. And also like Akira (1988), this anime once again proved that anime can also tell a mature story with deep meaning behind it. It successfully nailed all aspects, from powerful imagery, impressive animation, to even philosophical depth (which is very difficult to convey).

One big question raised by the anime is that: what is a human being if we got too integrated with the technology? Such concept actually inspired The Wachowskis to write “The Matrix” and even James Cameron in the making of “Avatar”.

So again if someone tells you that “anime is for kids“, tell them to watch Akira and Ghost In The Shell. They will never expect what would hit them right in the feel! 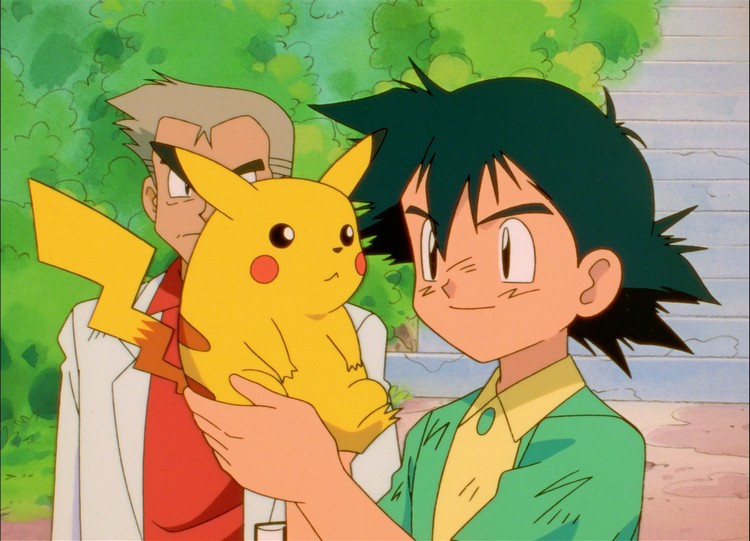 This gigantic video-game franchise has extreme popularity nowadays. But before it hit such an incredible success, Nintendo had to do something in order to gain traction towards the game.

It was all began back in 1996 when the very first Pokemon game called Pokémon Red and Green was released for the original Game Boy system. The company also aimed to release it to the Western audience, and so, in the West, we had Pokemon Red & Blue. The brilliant thing is: they used Pokemon anime as a medium to introduce children & teens into this brand new world.

Needless to say, this plan was a massive hit! Tons of people got into Pokemon via anime, and no long after, they got into the video game itself. And now, we saw a big community of Pokemon fans in both Japan & the world. The Pokemon franchise itself has grown so fast that it even expands to other entertainment areas like manga, anime (why not!?), card game, etc…

All and all, it is safe to say that Pokemon is also one of many people’s childhood memories, and now it is already a mega-franchise. 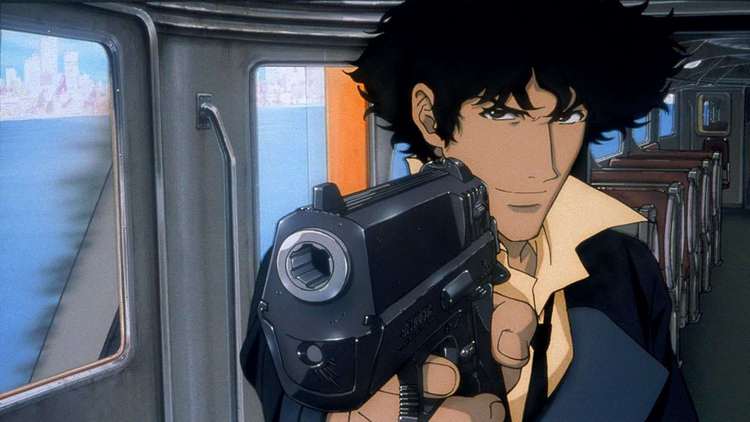 Throughout the list, we have seen several anime movies dealing with mature questions & problems, yet they are still movies. But for now, let’s end this list with an adult anime series widely known as Cowboy Bebop.

This stylish, jazz-filled anime series was first aired in 1998, featuring a far future when humans finally expanded beyond Earth to outer space. In this world, there are bounty hunters (or space cowboys) who work somewhat outside the law. But their main job is to hunt down & capture criminals. The story follows one such cowboy named Spike Spiegel and his adventure with other strange characters to make money while avoiding the police.

Just like how Akira affected the sci-fi aspect in the film, Cowboy Bebop also has a great influence on the sci-fi series later on in the Western world. To a certain extent, it is also a good gateway to introduce the West audience to the world anime thanks to its excellent jazz soundtrack, charming visual, and mature stories. The fact that it was even shown on Cartoon Network’s Adult Swim over a decade pretty much tells us how large this series is.

And that’s it folk! Which other anime should appear on this list in your opinion? Feel free to share with us and for now, thank you & stay tuned for more news in the future!