If you have followed gaming news recently, you will definitely know the latest EA debacle relating to their heavy-hitting title – Battlefield 5. It is all started when EA showed the very first Battlefield 5 trailer. This trailer is… kind of unsettling for many gamers. And unfortunately for EA, everything went downhill from here, especially with the recent news which said: Battlefield 5 pre-orders sales are behind 85% compared to Call of Duty Black Ops 4. 85 percent!? That is a huge number! This situation is really dire for Battlefield 5, which leads us to a question: What happened to Battlefield 5? Will it flop? Let’s find out! 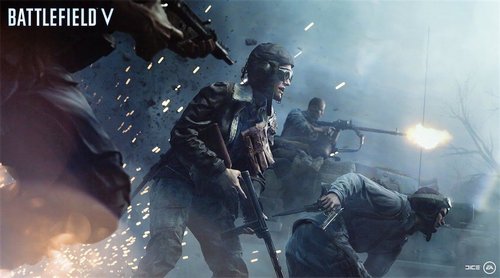 Battlefield 5 is fifth major sequel of the all-famous war-themed FPS series – Battlefield. The game will be officially released on October 11, 2018, which is only about one month and a half from now.

This new Battlefield sequel will take on the World War 2 theme again. Despite its old-time theme of World War 2 which has been exploited tons of times before, this game is expected to bring in breath of fresh air to its single-player campaign: stories of World War 2 which have never been told in video game before. The game’s first trailer was shown on May 23, 2018 and players did have opportunity to experience the game in E3 2018.

Based on the demo gameplay in E3 2018 and the showcase in Gamescom 2018, visually there is not much differences between 2016 Battlefield 1 and this sequel. The graphic seems to have a slight better update, while the UI and HUD are pretty much similar to the previous game. But of course, we’re not here to just focus on the graphic. What we’re more concerning is the gameplay.

The game mode players got to experience in the beta was Conquest which still maintained the core gameplay everyone loved back in Battlefield 1 with few more tweaks. Gunplay in Battlefield 5 feels tighter, better in overall. Pretty much every detail is enhanced from faster bullet speed, less drop, and more… It always feels really good when shooting and killing enemies, which is always a great thing in FPS games like Battlefield. In the demo, there are less grenades, less vehicles and this is actually a nice change since it prevents spamming situation. Generally the game still encourages players to focus on the objectives, rather than mindless killing. 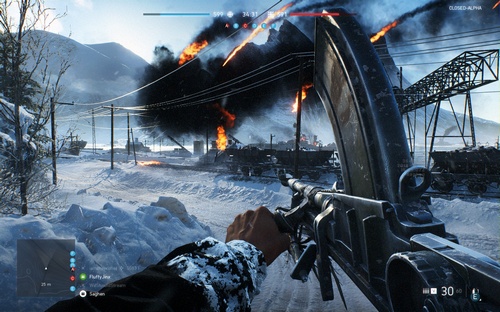 Which role you prefers to play? Medic, Scout, Support, or Assault? (Source: Internet)

The 4 Classes make a return, specifically:

Each of these 4 Classes also have Archetypes which will be unlocked as players gain more XP. These Archetypes are like sub-class which will serve different play-style, like Support which has Engineer and Machine Gunner archetype. 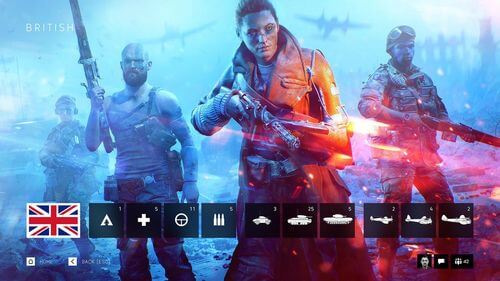 Welcome to the Company! (Source: Internet)

In terms of customization, DICE has just introduced a new system called Company. This Company will include every single customizations and options players have achieved throughout their gameplay. Players can create 1 Company for each faction, starting with Britain and German. Character appearance customization will include outfits, gender, helmets, skin color, and war paint for each Class.

Loadouts are also included so that players can choose the best setup for the upcoming match. The more a weapon is used, the more customizations will be unlocked such as skins, muzzles, stocks, receivers, barrels, etc… This customization system also applies to vehicles, for example: Players can customize their tanks with options like paints, sand bags, and leaf camos.

Unlocking customizations still follow the good ol’ rule: the more you play, the more you will unlock. And all your matches will contribute in your Company’s XP pool.

The Tides of War

Probably the most surprising announcement from DICE was that Battlefield 5 will have no Premium Pass, no expansion packs, no microtransaction (which is really, really interesting since this is EA we’re talking about). Instead, there will be a season system called as Tides of War. This seasonal system will feature new narrative every few months, each will focus on a particular timeline or aspect of World War 2. Each will also offer unique experience and content.

Of course, each Tides of War season will feature more customizations unique to a particular theme (for example the Fall of Europe) to be unlocked like new Archetype. There will be full of Grand Operation, Special Assignments, and new Missions.

2. What happened to Battlefield 5?

So in terms of gameplay itself, Battlefield 5 feels quite promising with all of its promised content, especially the claim of excluding microtransaction, Premium Pass, and all those similar stuffs. But apparently Battlefield 5 pre-order sales are still much, much lower than Call of Duty Black Ops 4. How can this happen? Everything began with the first Battlefield 5 trailer:

There are a number of things featured in this first trailer, but the most significant notion is the prime appearance of a woman soldier who has a… left synthetic arm? Not only that, if we pay attention, there are few small, yet questionable details like the soldier wearing… a katana behind his back? Why?

And as we already know, this trailer caused a huge uproar among gaming community. In fact, this first trailer current has got 334,000 Likes and 460,000 Dislikes, which is insane! And when you see some video with such abnormal Likes – Dislikes ratio, you know something wrong happened.

The problem from gamers’ perspective 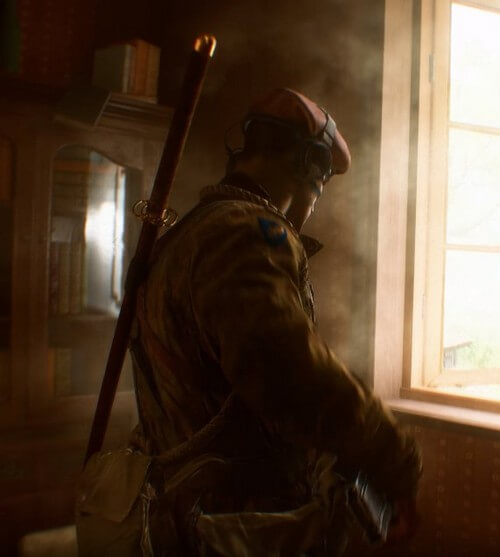 Why is there a katana on this guy’s back? (Source: Internet)

After seeing this trailer, generally most players express the concern that: they don’t understand what’s happening with this trailer. From many gamers’ perspective, Battlefield 5 is supposed to be a historic-accurate game about World War 2. However, this trailer openly shows a woman soldier right on the frontline – which never happened in real World War 2 before. This notion was pointed out by gamers like like YongYea, Rags, or The Act Man. And yes, though it is true that women DID join WW2, their main works were not on the frontline like men. There was no document openly said that many women joined the frontline and therefore, this trailer really messed up right at the beginning from historical standpoint.

In addition, as mentioned there are some other questionable details like soldiers wearing katana. Clearly this is so immersion breaking and it makes people confused about this game: What is this game about? Is this really Battlefield? Is this about World War 2? Or it is just a fun shooter where players can dress up whatever they like? Such confusing trailer makes people wondering about the core value of this game. And so, it is only natural when people get upset. So how did EA respond to this uproar? 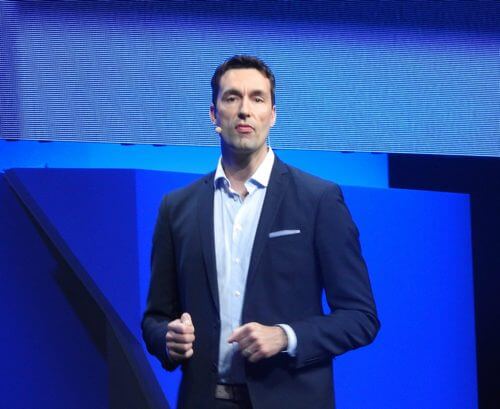 By the way, he left EA. (Source: Internet)

The confusing Battlefield 5 trailer is one thing. But surely it cannot be the sole reason why Battlefield 5 got so low pre-order rate. Turned out, it is highly related to EA’s respond to players’ uproar, specifically CCO Patrick Soderlund’s respond.

According to Gamasutra’s interview with Soderlund, he expressed that “The common perception is that there were no women in World War 2. There were a ton of women who both fought in World War 2 and partook in the war.” Then he talked about the “gender diverse” in video game. But things truly got more intense when he said that those who against female character in Battlefield 5 are “uneducated.” And if such statement was not bold enough, he also added: “We stand up for the cause because I think those people who don’t understand it, well, you have two choices: either accept it or don’t buy the game. I’m fine with either or. It’s just not ok.” 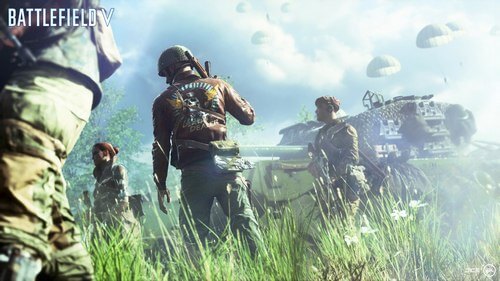 So… is this a game about World War 2? (Source: Internet)

So here’s the thing: Clearly EA had an aim in mind when they made that trailer. From our understanding, it seems EA wanted to show the game’s diversity of terms of customization, combining with some war actions to heat things up. This can explain why they put in the woman with synthetic arm or the katana-wearing soldier. But what they did not consider was players’ expectations from the game: Players expect a World War 2 game with historic-accurate depiction of that era. But obviously what EA showed was too bizarre, too confusing.

There are a few individuals claiming that this is about social justice, but personally we don’t believe this is the entire case. Again, this is not about players against the idea of letting woman to join in gaming. There is no such thing as that. In fact, players, gamers openly welcome anyone with any origins. Players do not concern gender inequality or political agenda in first place. We believe the core problem is EA themselves failed to fulfill the expectations from players. And since EA responded to players in such offensive manner (like saying people are “uneducated” or “either you accept or don’t buy”), no wonder why players are so pissed off. 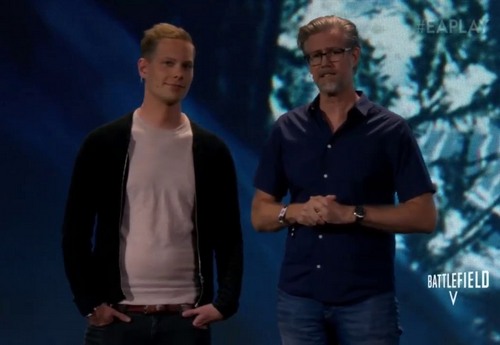 There is another idea relating Battlefield 5 low pre-order sale which also really makes sense. The idea is that: EA has failed in advertising Battlefield 5. Comparing to its main competitor Call of Duty Black Ops 4 (and maybe Red Dead Redemption 2 though these 2 games are not in the same genre), Battlefield 5 lacks so many elements to attract players.

First off, we know that the first trailer failed in impressing players due to its bizarre and confusing presentation. But EA must have done a better job for E3 2018, right?… Unfortunately, no! This is something many players can agree on: Battlefield 5 presentation in E3 2018 is really, really bad. Aside from boring talking about the game’s content and stuffs, they did not show any gameplay footage – the main thing which players were hoping to see. There was no excitement, nothing interesting to show. And sorry EA/DICE, having a battle royale mode is not that exciting. 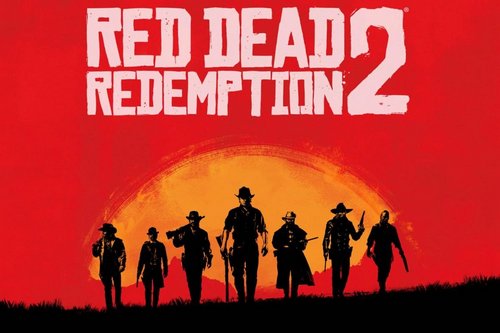 The elephant in the room this year – Red Dead Redemption 2 (Source: Internet)

And that’s it folks! What do you think about Battlefield 5? Feel free to share with us and for now, thank you and stay tune for more news in the future!