Thanos is definitely not the most powerful being in Marvel multiverse; however, he definitely comes out on top among all Marvel evil villains. And in Avengers Infinity War, Thanos has successfully claimed all the six Infinity Gems and the Infinity Gauntlet and banished half of the Universe. Standing before such calamity, who can defeat Thanos and stop his insane plan? Let’s find out!

1. How Powerful is Thanos? 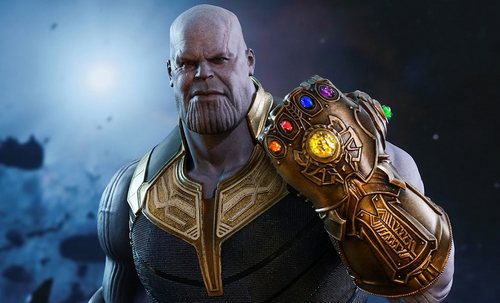 Killing half of the universe? Easy! (Source: Internet)

In original Marvel comics, Thanos was born an Eternal – an ancient race with advanced civilization and technology. However, Thanos was unique among his kin due to his Deviant Syndrome which caused his body to be unusually huge even for an Eternal with purple skin. Since he was very young, Thanos has shown to have murderous tendency. Death – the personification of death itself – knew this and she pushed Thanos to accept and show his true nature. And as we know, Thanos grew up and became nihilistic destroyer who wishes to win over Death’s affection.

Thanos’s evil nature is undeniable. He did kill his mother out of cold blood, and then in later years he commanded his own space-pirate armada who killed everything in their path. Despite already being an extremely powerful Eternal himself, Thanos had an unending thirst for new powers. No matter what the powers are: technology, bionic enhancement, cosmic energy, mystical power, or magic, Thanos would claim all for his nihilistic crusade. 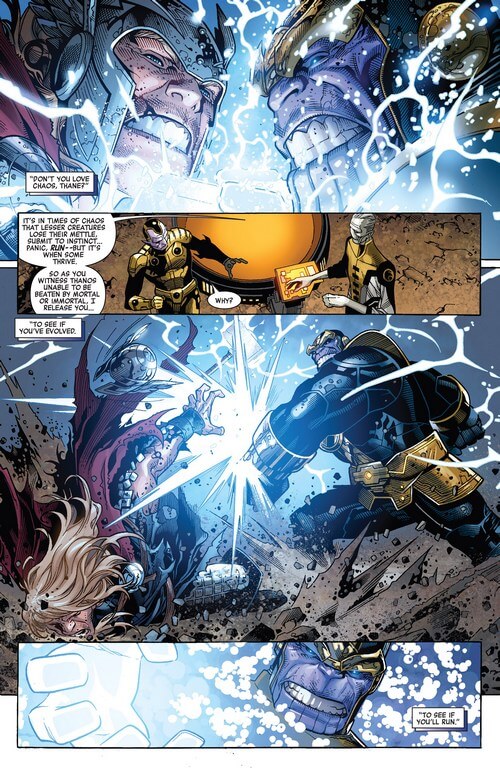 As an Eternal with Deviant Syndrome, Thanos already possessed superhuman physical capabilities since he was born. This includes superhuman speed, reflexes, stamina, and especially strength. And thanks to Death, Thanos’s physical strength was enhanced even further. Thanos can even destroy an entire planet with his mere blows. He can spar with the likes of Thor (with Power Gem) or Tyrant, and easily take down the likes of Silver Surfer or Beta Ray Bill. If necessary, he can always harness the cosmic energy to enhance his strength. Even when fighting against entities with equal or higher strength, Thanos still proved himself to be extremely hard opponent due to his extreme resilience and durability. At a point, Thanos was even an immortal because of Death’s banning him from dying. 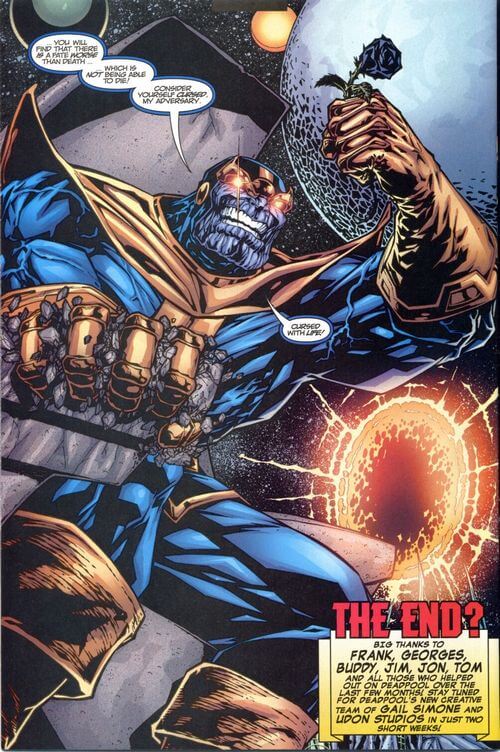 Aside from his tremendous physical prowess, Thanos’s most dangerous arsenal is actually his genius-level intelligence. Since he was young, Thanos’s significant trait was not his strength, but his intellect. He was and still is very skilled in many, many technologies and science advancements. He is far more intelligent than human’s standards. Thanks to his superb intelligence and his thirst for powers, Thanos restlessly finds any sort of powers he can obtain (including powers like mystical and arcane arts like necromancy) for his annihilation conquest. Aside from mastering different powers, Thanos is also an evil schemer who will stop at nothing to defeat his opponent.

Probably his most fatal flaw is his pride and arrogance towards opponents whom he considered as weaklings. That said, even if we can use his pride against him; that does not mean we can win Thanos easily. But still, one question remains: 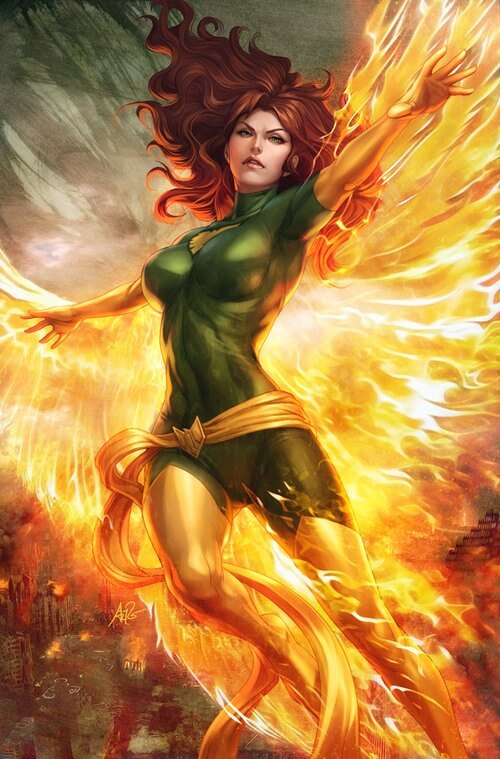 The Phoenix Force is essentially a multiversal entity of the Marvel Universe which resides within The Nexus of Realities. It represents life and possesses limitless power to destroy and create anything. It is literally immortal, indestructible. So naturally, Thanos can’t stand a chance against this crazy entity if he faces it directly without Infinity Gauntlet or the Heart of the Universe. However, Phoenix Force often appears by possessing a host. The amount of power Phoenix Force can release depends on the host. But in case of Jean Grey who considered as Phoenix Force’s perfect host, Thanos still cannot stand a chance against the Phoenix. 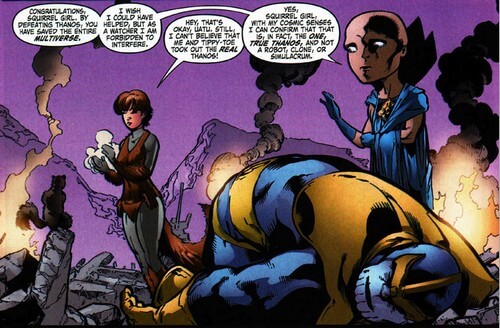 Squirrel Girl is often considered as “joke characters” since she DID beat lots of formidable opponents like Dr. Doom, Fin Fang Foom, and even Thanos (although he was confirmed to be a clone, but still, impressive). In case you’re wondering, basically Squirrel Girl has the power of… squirrels. She has enhanced physical prowess and also the power to communicate with… squirrels. But for some reason she can defeat any sort of opponents no matter how overpowered they are. She can even “make friend” with Galactus… which is weird? There is a theory is that her true power is actually positive belief. As long as she believes that she can win, such positive belief will becomes reality. Of course theory or not, we have to add her to this list due to her impossible feats. 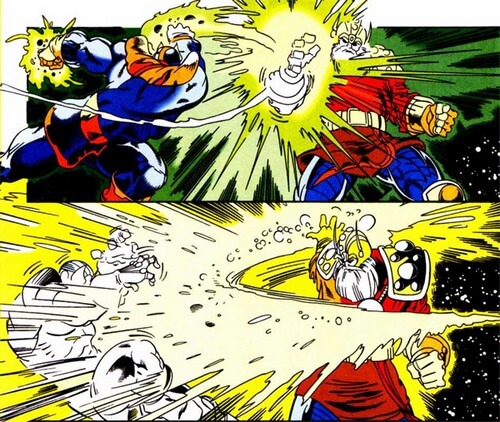 Odin Borson, or mostly known as the All-Father Odin, is the god-king of Asgard and father to our Thor. For those who have only watched Marvel movies, do not mistake Odin only as wise man with no fighting capability. As the matter of fact, in the original Marvel comics Odin is an insane warrior with insane mystical, god-like power. As an Asgardian God, Odin already possesses superhuman physical prowess and intellect. However, his true power lies within the mysterious Odin Force which boosts his power to immeasurable level. With Odin Force, he can teleport the entire human race to another dimension, banish his enemy to the deep space with a mere thought, and more… In fact, he did fight with both Thanos and Silver Surfer at ease. He one-shotted Silver Surfer and casually brought Thanos to his knees many times despite not being able to kill Thanos. But killing or not, Odin totally overwhelmed Thanos and still showed no sign of fatigue.

Some people may argue that Thanos has become more powerful after years while Odin hasn’t shown any significant change. However, judging by how Odin “headbutted” Galactus and knocked him unconscious, it is safe to say that Thanos still can’t stand a chance against Odin. This is much more situational than our 3 previous combatants. In terms of raw power, Dormammu is absolutely an insane monster. If Dormammu is within his domain of Dark Dimension, he can easily overwhelm even powerful foes like Lucifer, Satan, or Mephisto. Dormammu even thought of Odin as an inferior (while Odin considers him as an equal) and he even dared to challenge Eternity itself. Despite not knowing where this fight between Dormammu vs Eternity will go to, we can safely say that Dormammu is insanely powerful and surely Thanos can’t stand a chance Dormammu’s raw power. However, Thanos is not a no-brainer. He is a schemer and given time, it is possible for Thanos to find some way to overcome Dormammu’s power.

Galactus, or Galan, a.k.a the Devourer of Worlds, is so ancient, so powerful that he is considered as “siblings” to the cosmic entities like Eternity or Death. Originally, Galan was a humanoid living on the ancient planet of Taa which existed before the Big Bang. After the event, Galan became Galactus the Devourer of Worlds whose power was so tremendous that he had to devour the energy of an entire planet to maintain his power. At one point, Thanos did confront Galactus and managed to blast Galactus across the Moon. However, Galactus got serious and wrecked Thanos with only shot, making Thanos to beg on Galactus. In recent comic development, Galactus has become the Lifebringer. It is still not sure how powerful this Galactus is but definitely his power is no less than his former Devourer of Worlds self. 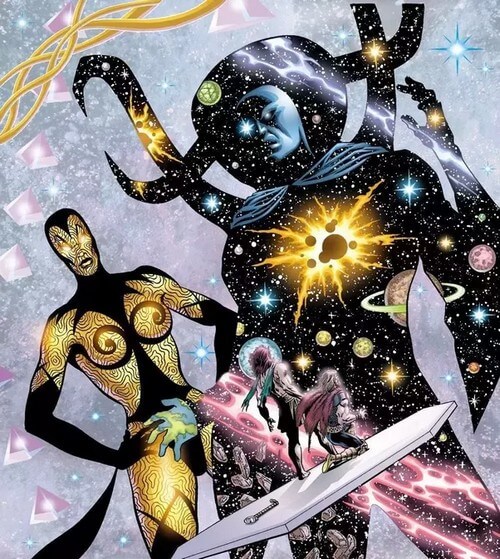 Every universe within Marvel Multiverse manifests itself as an anthropomorphic called as Eternity. As the manifestation of its universe, Eternity has omnipotent power over its universe. Eternity rarely shows itself, except in case of universal-level threats. So in short: Thanos will never defeat Eternity as long as he does not have the Infinity Gauntlet with full 6 Infinity Gems.

With Infinity Gauntlet, Thanos’s power becomes nigh-omnipotent. Almost all entities in Thanos’s respective universe could not stop him. So who can? In such cases, we will need the mightiest among the Multiverse. 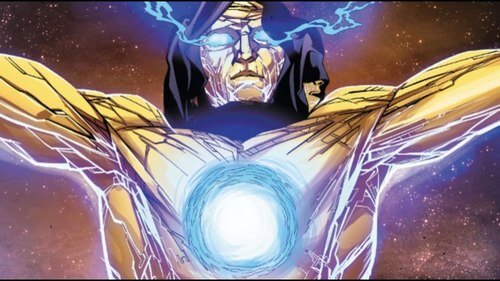 The Guardian of Multiverse (Source: Internet) 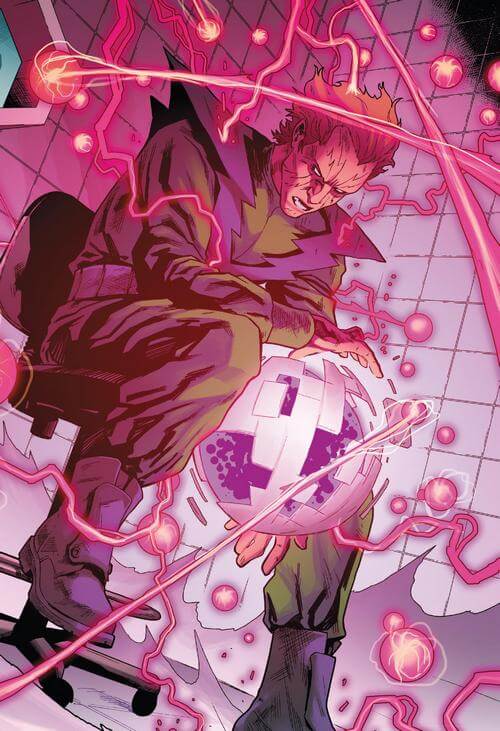 Owen Reece, or mostly known as Molecule Man, is one ridiculous character in Marvel multiverse. He is even arguably more powerful than Living Tribunal due to his ridiculous ability. As we can guess, Owen’s power is molecular manipulation. He can mentally control, transform, and manipulate any form of matters or energies. Molecule Man is so OP that even Galactus claimed that Molecule Man could destroy him with mere thought. Imagine fighting this guy and suddenly finding out that your body is dissolving in milliseconds… wew! 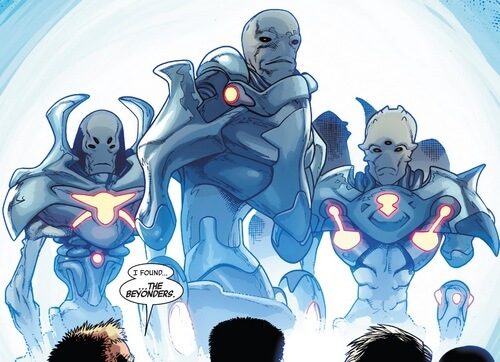 So… is there any other entity which are stronger than Living Tribunal and Molecule Man? Yes, in fact, there are other entities which live outside of the Multiverse called as Beyonders. These alien beings possess technologies far more advanced than any others within the Multiverse, which are beyond Multiverse’s understanding. These beings were so powerful that they even killed Living Tribunal and left its corpse on the Moon. Unless somehow Thanos can steal Beyonders’ technology, relying on Infinity Gauntlet cannot help Thanos defeating these aliens. 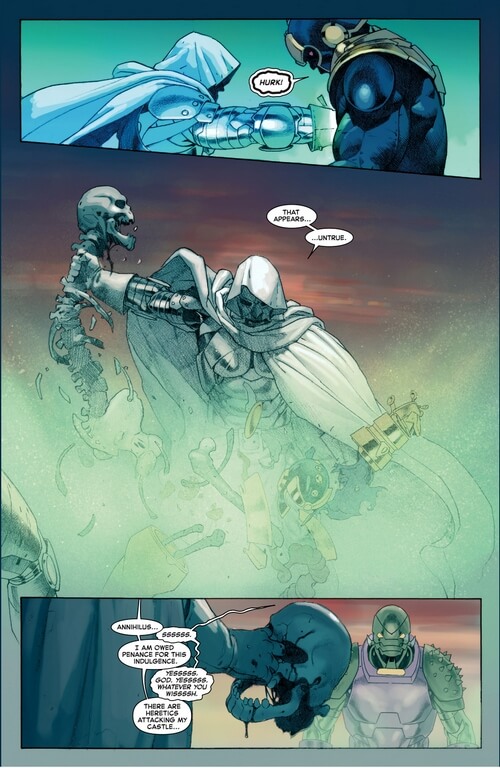 Most of us have probably heard of Dr. Doom – an evil genius who is well-versed in both science and magic. Similar to Thanos, Dr. Doom has an unending thirst for new powers; however, he is not nihilistic like Thanos. And interesting enough, in Secret Wars Dr. Doom successfully stole the technologies from the Beyonders, thus making him God Doom – a powerful mortal with power of gods, or even beyond gods. Secret Wars also showed a scene when God Doom faced Thanos. Since Thanos still did not aware of Dr. Doom’s new power, he looked down on Dr. Doom as usual. But unfortunately for him, standing before him was not any regular Dr. Doom; it was God Doom who brutally murdered Thanos with nice fatality move from Mortal Kombat. 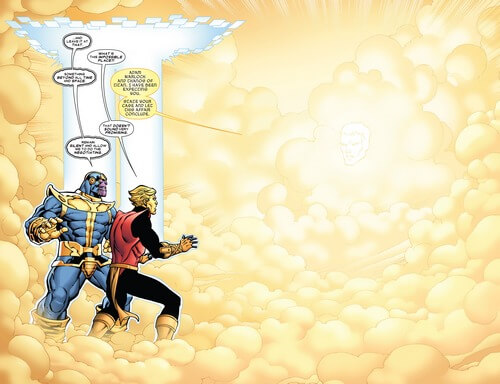 Living Tribunal, Molecule Man, Beyonders, God Doom, etc… All of these entities are definitely nigh-omnipotent beings. However, there is still a single entity who stands above all and everything within Marvel world: the One-Above-All. The One-Above-All is said to live outside both time and space, including all Multiverse and Beyonders’ universe. The One-Above-All is also said to be exist in everything and possesses power and intellect beyond any known systems. Until now we haven’t seen any case when The One-Above-All punishes any being by himself. But consider his omnipotent, omnipresent, and omniscient presence, surely he can crush Thanos even with Infinity Gauntlet like a tiny ant. 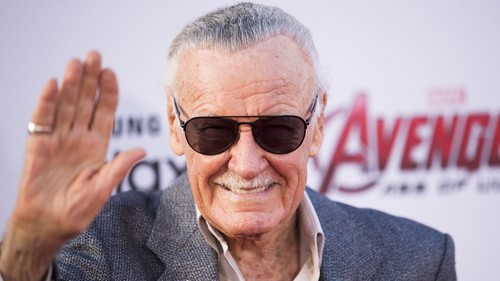 If you really, really, really want Thanos to be dead forever, you can try asking the father of Marvel world: Stan Lee. And if you manage to convince him, surely Thanos will never see the light of day ever again.

And that’s it folks! Who else do you think to have capability to defeat Thanos? Feel free to share with us and for now thank you and stay tune for more news in the future!