The problem with Call of Duty Ghosts in general is probably because everything is so forgettable and cut-short. The single campaign is nothing extraordinary and so short, as players can complete it in 5 hours. The multiplayer is just average at best with bland weapons, average maps, and disappointed game modes.

According to most CoD fans, Call of Duty Ghosts didn’t fulfill the expectation. Therefore, it was neglected by the Call of Duty community.

* At least the dog in Call of Duty Ghosts is so badass that it can take down almost anyone with only a whistle. 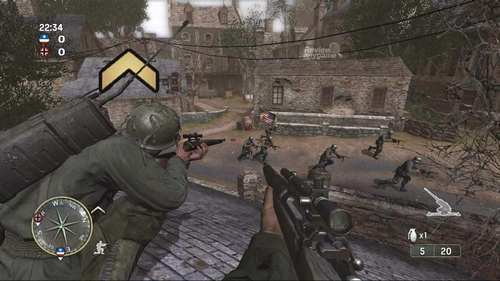 The predecessor Call of Duty games have always been good at describing the excellent gameplay and the intense atmosphere of the World Wars. However, thing didn’t turn out well with Call of Duty 3.

In term of gameplay, Call of Duty 3 successfully captured the essence gameplay of the franchise. However, it lacks heavy polishing for almost everything else. Call of Duty 3 still takes the scenario of the World War II, but the story is not memorable. The multiplayer is not really terrible, but the bugs and glitches in both single and multiplayer heavily bring down this title.

That said, it is quite understandable since Call of Duty 3 was kinda rush product with only less than a year development. For such a short and rushing time, it was hard for Treyarch team to bring out their best for this title. After the success of Modern Warfare trio and then the lowly rated Call of Duty Ghosts, CoD franchise seemed to be under a tough situation since it needed something to fresh out the series. And Call of Duty Advanced Warfare was an official push which brought the franchise to the futuristic direction. But to some extent, it failed to reboot the series.

Call of Duty Advanced Warfare brings the players to the future, featuring futuristic technologies, exo-skeletons, and more… The most impressive part about the campaign is probably the appearance of Kevin Spacey who totally nailed the charisma of an “evil-private-company president”. But besides that, the campaign is forgettable and quite predictable.

The multiplayer seemed to be better since it relies on players’ maneuver and movement. However, it somehow felt chaotic especially at first release days as players keep jumping around without strategy or plan.

In overall, Call of Duty Advanced Warfare is not a bad game; it forms a new direction for Call of Duty franchise. However, it’s not enough to attract the fans, nor change the players’ opinion about the franchise. The begin of everything: Call of Duty (Source: Internet)

Comparing to nowadays standard, the first Call of Duty can hardly be considered as the groundbreaking game. But back in the day, it was a solid FPS game and it made foundation for the later Call of Duty games.

The game takes on the World War II scenario and it provides a nice environment for players to immerse themselves in a World War II experience. Though back in the day, the customization and multiplayer were quite limited. Still it is a concrete foundation and partly inspiration for shooting genre. From many fans’ perspective, Modern Warfare 3 is good as a standalone game. But when putting it in the trilogy, it is acceptable at best because of many backward steps compared to previous predecessors. The campaign still has thrilling moments, but some of them lack impact (like the scene of terrorists on the airplane). The ending is also not truly satisfying, though it puts a decent end for the trilogy.

The multiplayer is decent, and attractive to wide player base. However, it seems easy to be exploited and its weapons feel unbalanced.

In overall, Modern Warfare 3 is just a decent Call of Duty game and it is not innovative or groundbreaking. And that’s why it can’t rank higher on the list. The latest Call of Duty title: Call of Duty Infinite Warfare is actually not a bad game as many people may think. Though it has some drawbacks, it is still a good Call of Duty game, especially in term of story.

Call of Duty Infinite Warfare brings players to a much further timeline when battles occur in the space. And as a surprise to many players, Infinite Warfare has an excellent campaign with memorable characters, intense moments, and glorious battles in space.

On the other hand, the multiplayer doesn’t have new innovations and it seems to try being in the safe zone. As the results, the multiplayer turns out to be average at best. Perhaps the only mode which keeps players in multiplayer is the zombie mode. But it’s not likely to have much attractive in long term. 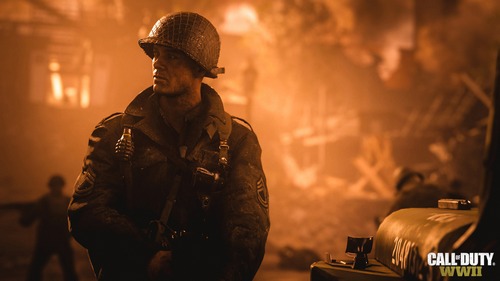 Back to “boot-on-the-ground”! (Source: Internet)

This may disappoint many fans but in our opinion, Call of Duty WW2 is not that good of a Call of Duty we hope for. Despite its huge success, the game does not really feel spectacular, it is only decent at best with bare minimum “innovation“.

In terms of singleplayer, CoD WW2 brings us back to the World War II where the Allied Force had to put a stop to the Nazi threat. On the bright side, the story focuses more on the bond between soldiers. However, it is still underwhelming. Now, some people may still feel amazed with certain fancy scenes from the campaign. But for us, it feels underwhelming compared to what Modern Warfare or Black Ops trio did.

The multiplayer part of the game is pretty much the same like other CoD games. It is still more about fun and chaotic element rather than strategic gameplay. It does have new addition like the War Mode which focuses on objectives rather than the usual kill-death. Yet even so, the multiplayer does not feel that much different. The “best part” of the game is possibly the Zombie mode, which is pretty well-done. But we doubt it is enough to pull us into the game.

Overall, we think Call of Duty WW2 is a decent CoD game, not an excellent one. If we consider it as standalone game, CoD WWII is definitely excellent. But other than that, we doubt that many players will rate the game highly, especially when the game includes a sort of… controversial “loot boxes“. Sci-Fi/futuristic idea is not always what people prefer, but nonetheless, Call of Duty Black Ops 3 totally kept up with its potential inherited from Call of Duty Advanced Warfare.

Taken from the Call of Duty Advanced Warfare, Black Ops III went further in improving the exo-suit formula with far better mobility. The campaign of Call of Duty Black Ops 3, while not being a blockbuster, is still fun to play especially when 4 friends can co-op in the campaign, giving the game higher replaying value.

Multiplayer is also enjoyable with its Specialists mechanic which gives more depth in strategy. The zombie mode also returns and it is as good as ever. Call of Duty 2: When the game went viral. (Source: Internet)

The sequel to the first Call of Duty is another grand hit with its excellent campaign and fluid gameplay mechanics. And back in the day, it is probably the most successful game to be able to capture the intense feeling of World War II.

Call of Duty 2 campaign brings players to different perspective of different Allied soldiers. The campaign filled with lots of intense and immersive moments, just like being in the war itself. Call of Duty 2 also features health pack; however, this doesn’t mean the game is easy. Back to the day when health regeneration is not a thing in FPS, these health packs are extremely precious as there is no other way to heal.

The gameplay is also a big leap which creates a foundation for later Call of Duty games: fluid, fast pace. Combining this with high difficulty, Call of Duty 2 is truly a great war to enjoy. Cold War is a curious period which is rarely touched in gaming industry. But in 2010, turned out it was an excellent kick-off for the Black Ops trio later on.

Call of Duty Black Ops singleplayer brings players to the Cold War period in Vietnam, and the campaign is truly unique and interesting to progress. Also, the campaign includes tons of interesting secrets and Easter eggs, which efficiently increase the playtime as players thrive to discover all the secrets hide within.

In addition, the multiplayer, while not being an outstanding renovation, is still excellent to enjoy, especially the improved zombies mode from the Call of Duty World at War. When the World at War (Source: Internet)

Call of Duty World at War campaign features 4 players co-op which is a splendid addition to the experience. This co-op mode allows players to enjoy the intense moments with fellows with the glorious arsenals. Jumping back and forth between times is an intriguing idea. Many games, including games of different genres than shooting, have tried to take implement this idea. One of the good examples is probably Onimusha Demon Siege released in 2004 for PS2 and ported for PC in 2005, featuring two timelines: ancient Japan and the modern-day Paris.

Call of Duty Black Ops 2 also took on this idea and to some extent; it succeeded despite controversial opinions among the fan base. Some consider the campaign to be too chaotic, while others think it’s a nice change. The single campaign brings players back and forth between the future in 2025, and the Cold War. It is also the first Call of Duty title to have multiple endings, with the total of 4 endings. The multiplayer is quite excellent with the new Pick 10 system, providing extensive customization for players.

In overall, despite many controversial opinions, Call of Duty Black Ops 2 is still deserved as one of the best Call of Duty games. Call of Duty Modern Warfare marks the beginning of the famous Modern Warfare trilogy, and also changes the direction to modern scenario. Needless to say, this guy is the big influence of the franchise and also among the most fans-favorite Call of Duty games.

The game brings players to the modern days with the threat of terrorism. The campaign is outstanding, including all the feelings of being in a war: intense moments, twist and turn events, and unpredictable outcome, especially the All Ghillied Up.

The multiplayer is also excellent to enjoy with its successful multiplayer formula inherited from previous Call of Duty games.  Especially with the kill-streak mechanic which forces players to think twice before engaging combat, rather than mindless shooting. Modern Warfare 2 campaign continues its unfinished story from the first Modern Warfare. The campaign keeps maintaining its excellent storyline with intense moments and unpredictable events, especially the infamous No Russian which rise huge controversy at the time.

The multiplayer still keeps its formula from the first Modern Warfare, but with improvement in many mechanics like weapons and perks. Maps are also excellently designed which require players to understand them if they want to survive.

And that’s it folk! Which Call of Duty games are the best in your opinion? Feel free to share with us and for now, thank you and stay tune for more news in the future!