You have tried Cuphead and failed numerous times? You have raged so much that you really, really want rage-quit the game forever? If that is your current situation, don’t worry! We understand that feeling. Although Cuphead has released for quite a while now, not everyone has defeated such an “annoying” game. Well, fret not since it is about time take a look at some Cuphead tips and tricks! So with no further ado, let’s “deal with the devil”!

1. Get to Know Cuphead 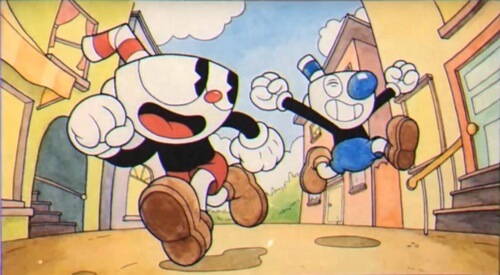 For those who haven’t tried Cuphead yet (and wish to try someday), Cuphead is a 2-D run-and-gun shooter developed by an indie developer Studio MDHR. The game has its charm right off the bat with its smooth and gorgeous graphic of 1930s cartoon. In the game players get to play as Cuphead (or Mugman if co-op) and fight through various unique boss battles. Sounds simple, isn’t it? But the main problem is: The game is really hard. If you have heard people complaining about the game’s difficulty, yes it is true. Cuphead is like “Dark Souls” of 2D world and that’s what makes the game attractive. So to make the game a bit “easier”, here are several important aspects of the game which we may need to take notice: 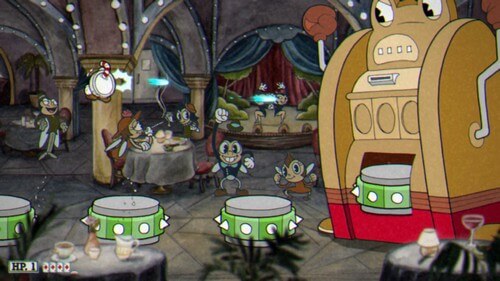 Where did this slot machine come from? (Source: Internet)

Unlike most 2-D run-and-gun shooter games we have seen so far, Cuphead is quite different since it comprises of many boss stages, rather than traditional beat stages. We have to say Cuphead really nailed it with its boss fights. Different boss fight includes various stages and forms. Each time players defeat one form, the boss will change to another form with totally different shape and power. Besides high difficulty, these boss stages are probably one of the most intriguing things about Cuphead. Just like 1930s cartoon, these boss forms are unpredictable. They will totally surprise you with all sorts of crazy thing you never expect. 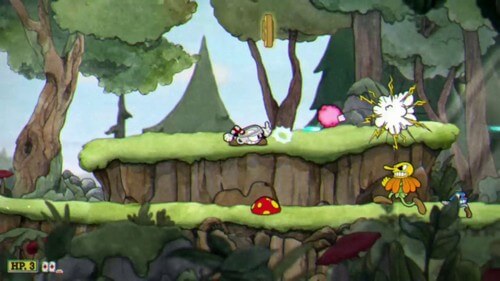 For some of us, Run-n-Gun level may be boring but they are essential for getting Coins. They are basically stage level in which you have to run through the level and get to the finish line. Throughout the level, there will be Coins to take and we will need them to purchase necessary upgrades for Cuphead and Mugman. 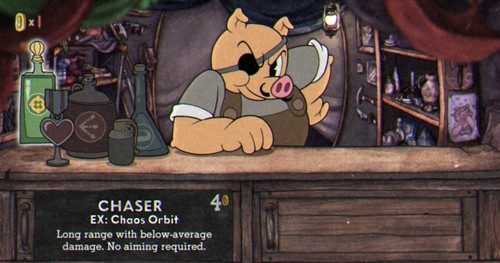 In Cuphead, there is a shop called Porkrind’s Emporium and it is essential for later game progression (unless you really want to play hardcore style without buying anything). These items include Shots, Super Moves, and Charms. All cost certain amount of Coins. There are 3 types of item you can buy from shops:

There are 5 Shots you can purchase from the shop and each shot has distinct characteristics. Each also includes EX attack which is basically enhanced attack. All shots cost 4 Coins.

For better demonstration, you can check out KaitoJoka’s video below: 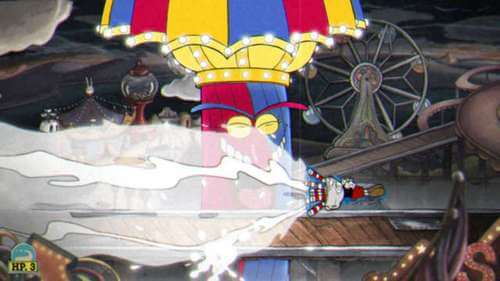 Hmm… what kind of “liquid” is he shooting? (Source: Internet)

Finally we have Charms which are passive buffs and each costs 3 Coins. There are:

So now that we have taken a look at all necessary information, let’s see what Cuphead tips and tricks we have to improve our performance (and win-rate… hopefully)! 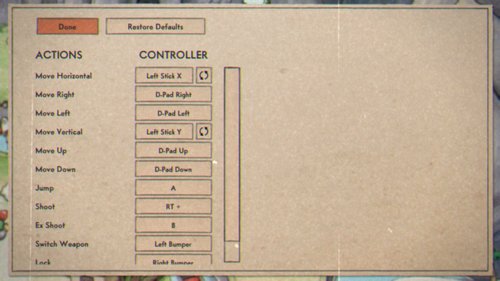 Changing buttons, why not? (Source: Internet)

The default buttons in Cuphead can be quite… troublesome especially in later progression. Some of us may have no problem with the default setup. But if you find that setup bad for you, you should change to suit your style. After all, there is no need to put more burdens on ourselves in an already-difficult game. 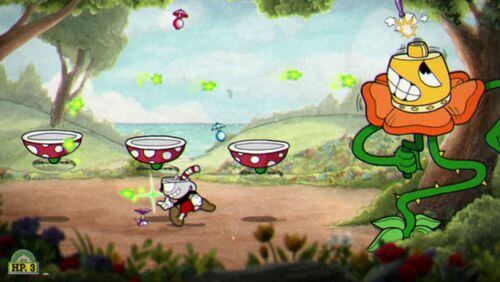 As we can see, there are 5 Shots we can purchase; along with our first Shot we have 6 Shots in total. Each shot can actually be really handy in different scenarios; therefore, choosing the best Shots can be quite a great advantage. Aside from the basic Shot Peashooter, the two most commonly used Shots are Chaser and Spreader.

On the other hand, Charge is really devastating when it hits the enemy. However, it needs time to charge and can be difficult to aim. Roundabout’s boomerang property is really awesome in certain fights (which we would like not to spoil here). Lobber seems to be the most… insignificant compared to other Shots (but it’s probably because we haven’t found a good use for it yet). But in any cases, don’t forget that you can equip 2 Shots at a time so choose your best combination! 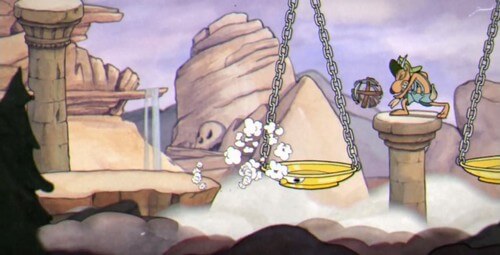 Charms provide useful buffs for our character and naturally, we want to the best-suit buffs to survive the game. Coming in the first place we have Smoke Bomb which is extremely useful in most fights. It basically makes the character invincible while dashing and it allows us to dodge enemy’s fires rather easily. Since each boss always has dangerous moves, having Smoke Bomb is definitely handy.

In case you feel like dying a lot, it can be a good idea to grab Heart or Twin Heart for more health. Heart may be the best choice since it only reduces a slight amount of attack power. Twin Heart reduces more attack power but it will provide even more survivability.

The Coffee perk automatically generates your Super meter about 1 card per 25 seconds, which means you can have full 5 cards after 2 minutes. It can be a lot faster when you hit the enemy and that means more opportunity for Super Moves. However, if you do not really depend on Supers then we suggest other Charms like Smoke Bomb.

Whetstone and Sugar seems not to be the most useful out of the 6 Charms. Whetstone basically makes your Parry move become melee attack. It adds a nice attacking option but it is not really reliable in many chaotic fights. Sugar automatically makes you Parry; however, this can mess up your position when you “accidentally” Parry. Since it is important to master Parrying, we only suggest this Charm as you are learning the game. But when you are mastering it, this Charm is rather unnecessary. 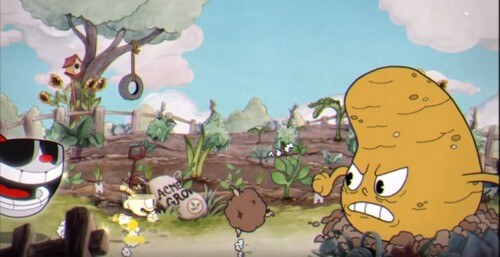 Supers are handy ability which can help you deal extreme damage (Energy Beam and Giant Ghost), or make you invulnerable (Invincibility). Energy Beam is a nice attack move with huge attack power; however, in bullet hell situations, you would want to choose the correct timing since there will be a vulnerable time after using it which you can’t do anything about it. Giant Ghost is also a devastating move but it won’t easy since you have to control both the ghost and the body simultaneously. But once you get a hang of it, this Super will be an excellent addition to both offense and defense. Invincibility seems to be the most “practical” as it makes you invulnerable for 5 seconds. 5 sec invulnerable in Cuphead is extremely useful. It does not grant you any significant attack power but being able to survive dire situation is always a huge perk.

Learn Parry, It is Necessary! 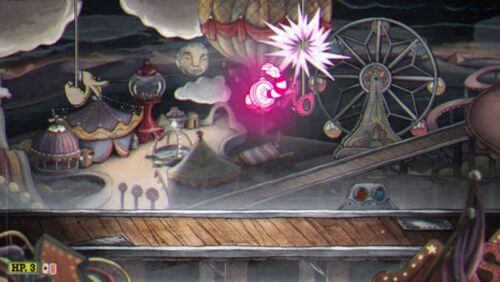 Parry is a nice move to tackle objects with glowing pink color. When Parry, it will mostly destroy the object and launch the character into the air, making this Parry an extremely versatile move. In addition, it provides 1 additional card for Super meter. Even if you are hesitate in learning Parry, sad news is some later boss fights will require Parrying to survive. And finally, if you are perfectionist who wants that sweet S rank after each level, you will need Parry.

And that’s it folk! Those are the 5 Cuphead tips and tricks we can suggest for now. For spoiler reason, we won’t give any tip for each boss at the moment but we will update it in time of need. And for now, thank you and stay tune for more news in the future!