Cuphead was released on September 29, 2017 and undoubtedly it is one of the most well-received games in 2017. At first, the game has quite a… funny start. While lots of game journalists rated the game as bad, gamers strongly disagreed and they considered the game to be much better than what “those game journalists” said. Personally, we have experienced this beautiful, cartoonish 2D world of Cuphead. And we have to say: the game is great despite its brutal difficulty. It is really interesting to see such a difficult and irritating game attract us so much. And so, let’s dig in and discover the magic behind Cuphead: Why is it so good?

Table of Content:
1. Why Difficulty is Important in Gaming?
2. What Makes Cuphead so Good?
3. Are We Desperate for a Good Game?

1. Why Difficulty is Important in Gaming? 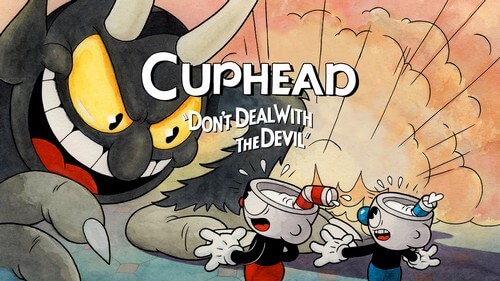 The moment you play the game, you have already dealt with the “devil”. (Source: Internet)

Let’s get this straight: Cuphead is attractive not because of its visual and sound alone, it is because of the hard difficulty. Now some people may not consider difficulty in gaming that important, but it is actually more interesting than what we may think.

The importance of difficulty may depend on different types of good. But in most situations like FPS shooters or RPG games, difficulty is a necessary component to keep players trying throughout the game. Of course, if you are players who just want fun moments without facing any sort of “stress” or “challenges”, high difficult is indeed frustrating. But for most other gamers, difficulty is a mean of challenge. It creates the sense of effort and achievement, especially when we overcome hard challenges. Such achievement sensation is… fantastic, unbelievable, and definitely good.

Frankly speaking, when we play a game, we also like to experience at least a bit of challenge so that we feel interested in the game. We mean… how good is a badass-looking boss if it turns out to be a weakling? And this kind of “philosophy” is exactly what made games like Dark Souls and later on Cuphead so interesting. 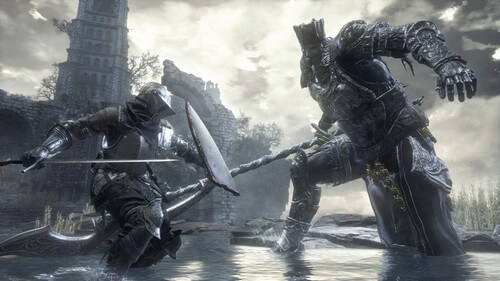 In the current gaming era, Dark Souls (and its ascendant Demon’s Souls) is a prime example of a good game with high difficulty. The game focuses on high difficulty, tricky levels, and overwhelming bosses. The game’s mechanics are not exactly that hard to learn, but they can be difficulty to master. At first, it feels kind of impossible to progress through the game. But with observation and patient, players will eventually learn everything about the world, enemies, and fearsome bosses to overcome them. And to further emphasize this difficult nature of the game, Dark Souls also features dark, brutal visuals of a dying world. 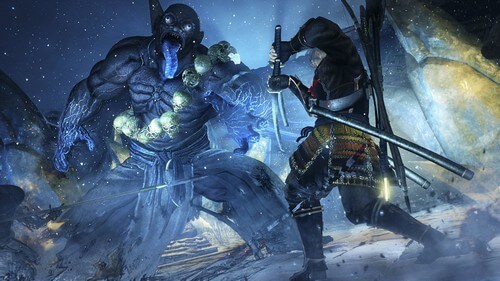 Now, you may think that lots of players absolutely hate this game. Well, you are not entirely wrong. The game is meant to be difficult in the first place and that’s why not all RPG players are fans of it. But many, many players love the game for what it is. After the success of Dark Souls franchise, it is not a coincidence why many later games trying to adopt this concept, for example: Lords of the Fallen, The Surge, Salt and Sanctuary, Necropolis, and Nioh. All of these games, and more importantly Dark Souls, have started a game trend called “Souls-like” games. And then we come to Cuphead – a 2D platformer which is not exactly the same as Dark Souls. However, it is also deemed by most players as “Dark Souls” of 2D world.

2. What Makes Cuphead so Good?

Cuphead is a 2D platformer/run-and-gun indie game 2017 developed by StudioMDHR. It was released for PC and Xbox One on September 29 and needless to say by now, the game is a huge success. It features an interesting story and visual style similar to the cartoons in 1930s. So, why is it called as the “2D Dark Souls”?

“Who would lose to a potato?” (Source: Internet)

This is literally what we often shout out when playing Cuphead (though truth be told, we even curse more than that but let’s not talk about that, shall we?). Cuphead’s difficulty is high, really, it’s really hard. Even though one of us has already completed Dark Souls 1 to Dark Souls 3 before, he still got frustrated when playing this game. But it seems that’s why we love the game: the magic of Dark Souls has returned with this 2D world.

At first glance, Cuphead looks like a child’s game. And it actually may be true! If you play the game for the first time without having any sort of spoiler, this game will make you feel that way at the beginning. But after the “cute” tutorial, all hells start to break loose. Each boss fight in Cuphead is really hard and extremely unique. These bosses always have various forms and phases, which we have to admit, caught us surprise. They are unforgiving and each phase makes them even harder. And when we got defeated, the game taunted us with really, really irritating quotes. Naturally, we don’t want to feel like “losers” and we keep convincing ourselves that “we won’t lose to this crap.” After “several” tries, we eventually beat the boss and feeling is fantastic, it feels like beating Dark Souls’ bosses. 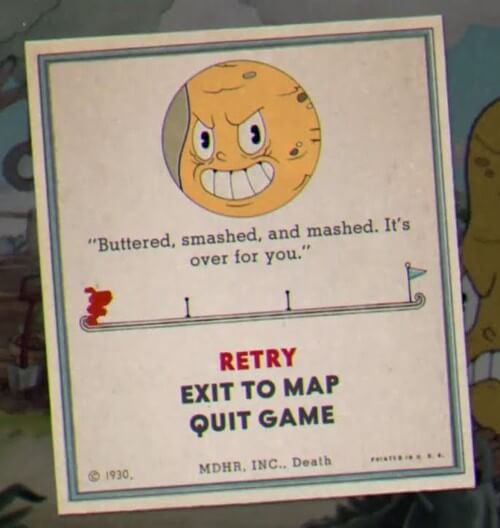 We understand that many players do not like this sort of challenges, but again, we cannot deny that many people prefer this type of game. Some players also express that games like Cuphead or Dark Souls are not meant to be finished in one go. It aimed at trial-and-error style of game which requires players to be patient. They also think that the game becomes much harder only when we get mad. The madder we are, the more difficult the game becomes since we become reckless which is ironically, increase the change of failure. If we look Cuphead from this perspective, personally we really appreciate the game for what it is and what it can actually teach us.

Dark Souls is famous not only because of its difficulty; it is also well-known for its sense of exploration. The world of Dark Souls is shrouded with tons of mysteries and tales. The only way for players to understand its story is to pay attention to every detail within the area. Each area has its own characteristics, enemies, and items. All of them do make sense why they exist in the way they are now. Therefore, exploring the world of Dark Souls is fun because players want to know what’s happening around them. 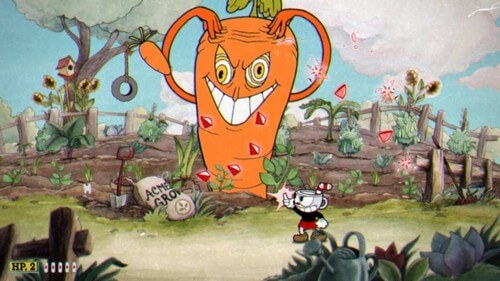 Where did this carrot come from? Where’s the potato? (Source: Internet)

Cuphead also has this vibe of exploration, but not like Dark Souls. From our points of view, the sense of exploration in Cuphead lies within the different levels and bosses themselves. Each level is beautiful no doubt; it reminds us of the old cartoons during the 1930s. But that is not the main thing which piques our interest. What we would like to see are the bosses. As mentioned, each boss in Cuphead is extremely unique and diverse in appearance and power. Not only that, each phase also changes the boss’s appearance drastically and often the time bosses surprise with their insane new forms. These changes are unpredictable, and so too their movements and attacks. After defeating each boss, we usually want to see how the new boss will look like, what kinds of form they have. All make the game much more interesting since every new level, every new boss always have new things to see.

We admit this is not really exploration if we consider other AAA games with huge open world, areas, bosses, gears, and Easter Eggs. Yet to some extent, Cuphead delivers quite a fascinating, yet compact discovery sense for players without travelling afar like other open-world games. 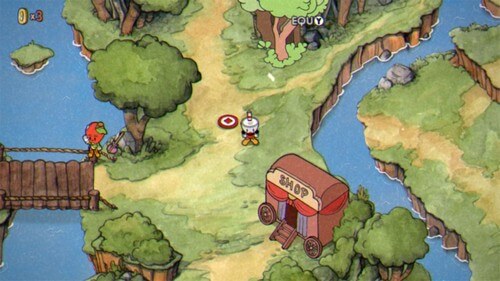 We generally don’t have any issue with Cuphead’s visual and sound. Everything looks and sounds fantastic, close to the old cartoonish style. The game also runs really smooth and so far, we haven’t encountered any sort of frame rate issue. Here we specifically like the bosses’ design and the transitions between phases. As we said, the bosses are extremely unique in both appearance and power. Everything is unpredictable and always surprises us. Overall, both visual and sound really do a great job in strengthening players’ experience with the game, besides it solid gameplay.

3. Are We Desperate for a Good Game?

This is only our personal opinion but somehow we feel Cuphead’s success is partly due to the current state of gaming industry. Gamers nowadays seem to be desperate for something new, or to be more precisely, a truly good and enjoyable game. If you follow the gaming news closely, you will see that there are tons of new games released this year like Middle Earth Shadow of War, Call of Duty WW2, Destiny 2, and the most recently Star Wars Battlefront 2. All of these games are considered as AAA titles, yet these games did not keep up with many people’s expectation. 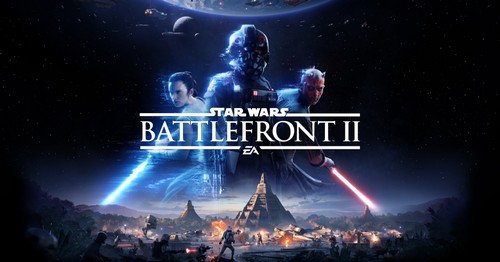 Okay, we do not mean that these games are bad, but they are decent. Lots of game reviewers and critics out there already discussed about this and their overall experience about these games are so-so, sometimes even bad. Take Star Wars Battlefront 2 for an instance, the game itself is not bad. But it is only decent at best. Not to mention the infamous microtransaction which EA put into the game which has enraged tons and tons players. Unfortunately, Star Wars Battlefront 2 is not the only game using this “microtransaction.” Big names like Middle Earth Shadow of War and Call of Duty WW2 also has it and clearly lots of gamers are not happy about it.

This very state of gaming nowadays seems to drive gamers to a point of desperation. Well, “desperation” may be exaggerated word, but still, people are still desire a really good game. Interestingly, Cuphead arrived in such time and when the game is already excellent by itself, people were naturally drawn to it.

But that said; that’s just a food-for-thought story. So what do you think about Cuphead? Feel free to share with us and for now, thank you and stay tune for more news in the future!