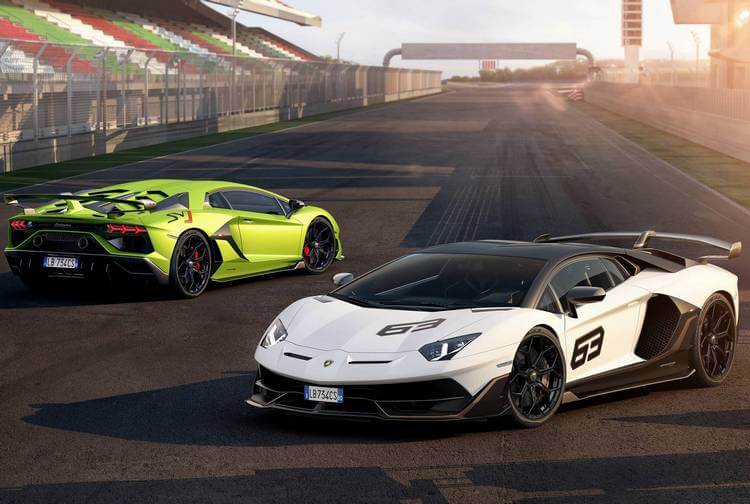 Lamborghini Aventador SVJ stands for “Super Veloce Jota”, in which: Super Veloce means “super fast” while Jota means “track”. And true to its name, this hardcore, track-focused beast’s capability is maddening. While the Lamborghini Aventador SV excels in power and performance, it got a bit of problem in terms of feeling heavy and jerky gearbox. Fully aware of such down sides, Lamborghini Automobili decided to bring in the Aerodinamica Lamborghini Attiva system (or ALA for short) for the SVJ, both for the front and the rear. The result is a beast of extreme capability, in fact, the Aventador SVJ did finish Nurburgring lap within 6:44.97 of lap time.

The Aventador SVJ is a limited edition, also, there will be special edition called as Aventador SVJ 63 which features unique aesthetic design to celebrate Lamborghini’s founding year of 1963. But enough of that, what we want to see is how cool this “great bull” is. And so with no further ado, let’s sees what does Lamborghini Aventador SVJ has in store!

ALA All the way! 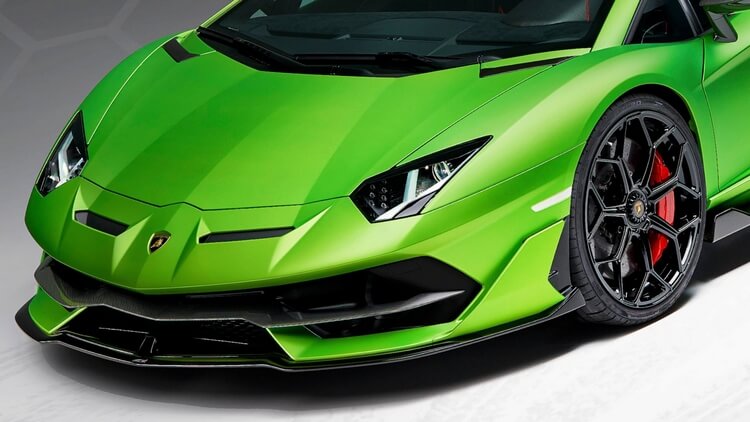 For the most part, Lamborghini Aventador SVJ retains the similar Aventador aesthetic. But looking in closely, we will see lots of ALA details implemented throughout the exterior. In short, this system aims at delivering the air through the front to the rear, and to the wing and redirecting it underneath that massive wing to improve the cornering and downforce. Of course, the car will inherit core elements from the Aventador S and SV, including the all-wheel-drive system and rear-wheel steering, and then bring everything to a whole new extreme level. 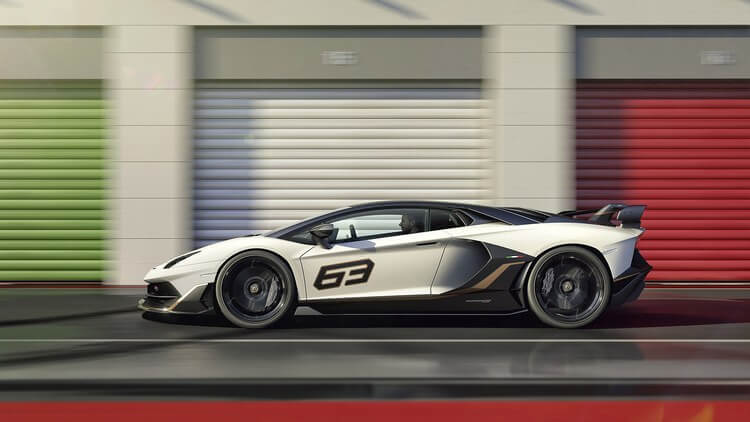 The side (Source: Internet)

Starting from the front, we can see a front ALA splitter, featuring flap which directs the air to the front hood through the two nostrils, giving the car more downforce on one side independently, depending on where it is turning. The flap opens in 500 millisecond which helps in cornering and sticking the car on the ground. Looking at the nostrils from above, we can see all the way through to the splitter and inside, there are vents which helps directing the air. In addition, there are quite lots of open-air space upfront, including the front-end plates on the splitter. 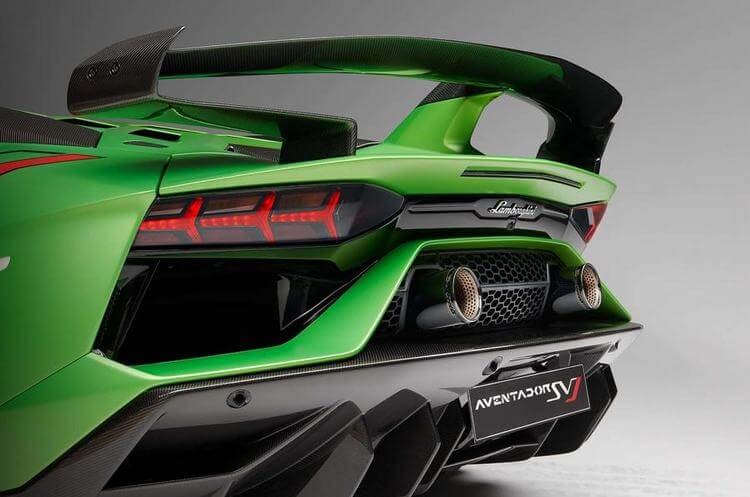 And the rear (Source: Internet)

Moving to the rear, we can see everything here looks totally extreme. It seems to take cues from the Veneno and of course the Lamborghini SV. Notice the massive rear wing; right in front of it we can see a vent which will channel the air through it to the wing, then the air is released beneath the wing on either side, depending on which way the car is turning. Also look at the two sides; we can easily spot two side radiators which direct the air to the rear’s huge diffusers. Overall, such design helps providing even more downforce. As the matter of fact, the Aventador SVJ has 70% more downforce than the Aventador SV. 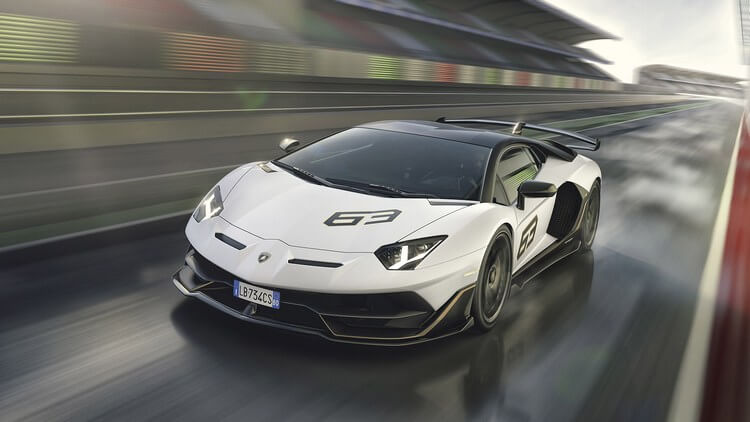 In terms of power, Lamborghini Aventador SVJ still utilizes the power of 6.5-litre naturally aspirated V12 engine which can generate 770 horsepower and 531 lb-ft of torque. The car is expected to hit the max speed of 216 mph, and also, it can accelerate from 0 to 60 mph within 2.8 secs, and from 0 to 124 mph within 8.5 secs. 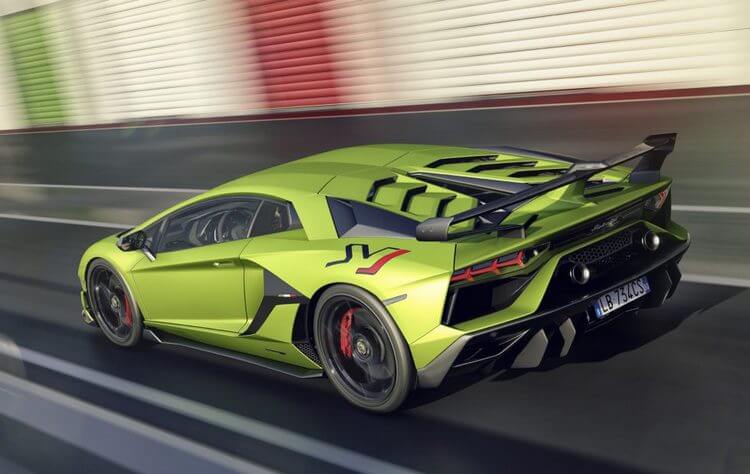 Of course, power is not the sole focus for the SVJ. As Stefano Domenicali – Automobili Lamborghini Chairman and Chief Executive Officer – stated: “The Aventador SVJ is an innovative car and represents the absolute pinnacle of our super sports car product range”, Lamborghini Aventador SVJ is said to be the symbol of “super-fast, super-athletic, aerodynamic superiority”. And to make this vision a reality, the development team has improved on various aspects of the car. For example, Domenicali shared: “The rear-wheel steering has been developed to further improve the car’s stability while reducing braking distances, particularly in combined braking/turning conditions such as high speed cornering”. In addition, the four-wheel drive system also gained a significant upgrade which allows the SVJ to send 3 more percent to the rear axle. And along with the enhanced braking, a new type of Pirelli P Zero Corsa has been developed for Lamborghini Aventador SVJ specifically for better vertical stiffness to comprehend with higher downforce and enhanced grip. 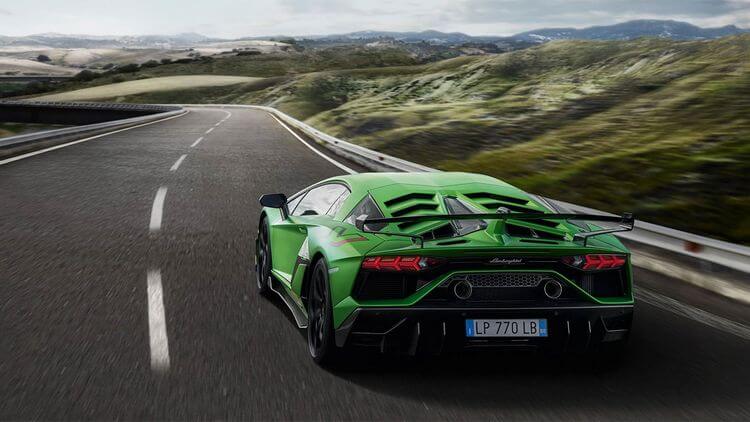 What do you think about Lamborghini Aventador SVJ? (Source: Internet)

Judging by the outstanding performance of the Aventador series, we can expect this new Aventador SVJ to have no less capability than the SV. Interested in the SVJ? Note that the base price is capped at $517,770 and there will be only 900 Lamborghini Aventador SVJ units produced, 63 of which are the SVJ 63 Special Edition.

So what do you think about Lamborghini Aventador SVJ? Feel free to share with us and for now thank you and stay tune for more news in the future!