Marvel Spider Man PS4 has just been released for nearly a week now and it already stands on top of sale chart. It even surpasses the PS4 bomb God of War in certain regions like Japan, which pretty much implies how hot our “Spider-Boy” is. Indeed, Spider Man PS4 is an extremely fun, yet, quite challenging Spider Man game (which is a good thing, no doubt). So if you are having troubles with fighting crimes, defeating nefarious bosses as Spiderman? Here’s the Marvel Spider Man PS4 Tips and Tricks! 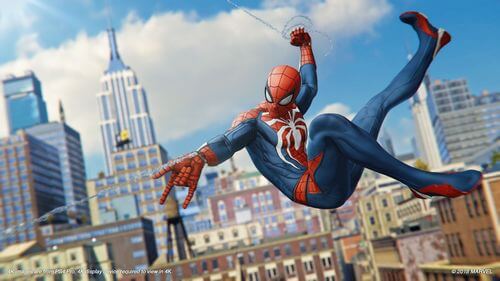 Web-slinging is an important part of Spider Man experience and right off the bat; Marvel Spider Man PS4 nails it immediately at the beginning of the game. Not only the control is simple to grasp, it also feels extremely smooth while Spidey’s animation looks cool and natural. Furthermore, who can refuse web-slinging around the beautiful, lively New York City? And on top of that, getting to the highest skyscraper and enjoy the view of New York City is truly a sight to behold. 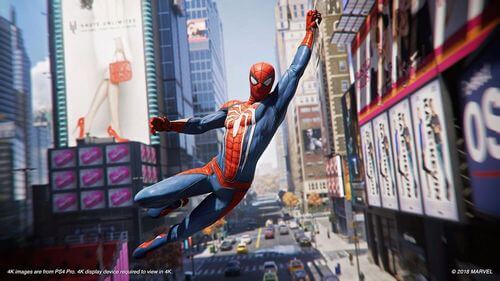 The control is really simple, all you need to do is holding R2 button to start swinging, and then releasing R2 to detach. And while holding R2 to swing, you can press X to jump and gain more speed. That’s the basic stuffs, but here some few tips to adjust your web-slinging:

Of course, there are also Skills which will help your web-slinging smoother, but we will mention them in later section.

2. Learn the basic combat, you will need it 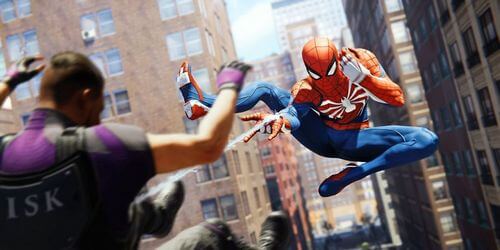 In Marvel Spider Man PS4, you will fight, a lot. And so it is essential to grasp the combat mechanics as soon as possible. The basic control is rather simple: 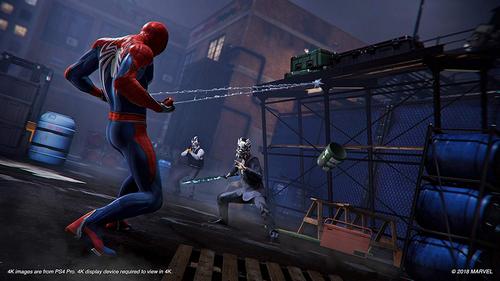 At first glance, combat in Spider Man PS4 may feel like a copy-paste of Batman Arkham series. However, you will soon realize that it is just the surface. There are many types of enemy with different powers, and so you can’t just simply press Square to punch them and press Circle to dodge when necessary. These baddies will require different tactics to deal with them; therefore, always learn these enemy types’ pros and cons. Plus, always utilize the environment, for example: throwing always give advantage in clearing out surrounding enemies and knock down gun-wielding guy from a far.

The game also adds a new combat element called as Focus. The Focus bar appears below the health bar and it will refill as you perform attacks. The longer combo you can pull out, the faster it will refill, especially with air combo. Once it fills out a bar, you can use it either to instantly take down an enemy, or heal yourself. Managing Focus is also an important aspect in combat, as you will need it later on to deal with different enemy types.

3. Fix the Surveillance Towers if possible 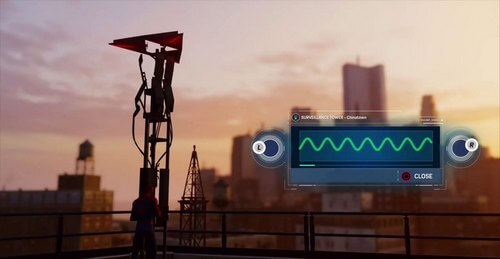 After finishing the first 2 main missions, you will get to fix Surveillance Tower which will reveal various side activities around the district (to be honest, it really feels like Assassin’s Creed towers). And as you progress through the main storyline, you will get to unlock more towers. And so, we suggest unlocking the Surveillance Towers if you can. The reason is: the side activities revealed by the towers will provide you XP upon completion and especially, they will reward you with Tokens for various upgrades. 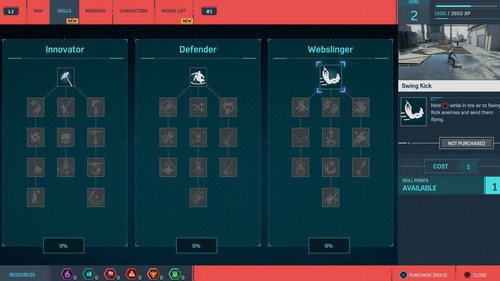 Which Skill tree is your most favorite? (Source: Internet)

One important RPG element implemented in the game is the leveling and Skill trees system. There are 3 different Skill trees namely: Innovator, Defender, and Webslinger.

Of course, you can pick whatever Skills you like and experiment with them. But here, we will suggest several Skills which should be unlocked early. First off, we have some recommended Skills from Webslinger tree:

While Quick Zip and Quick Recovery are not really ideal in combat, they will help you swinging around the city more quickly. Air Tricks on the other hand, can be very helpful in building Focus for combat, plus it increases additional XP. 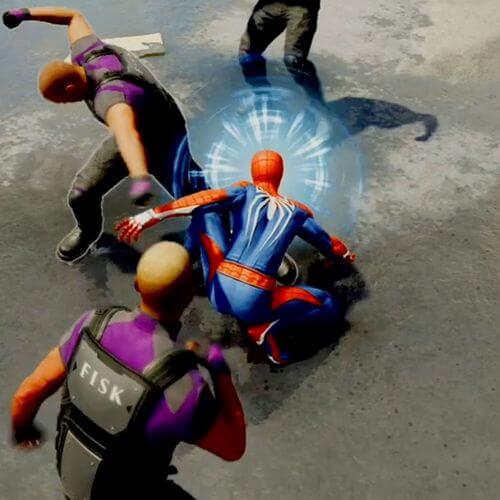 Next we have some suggestions from Defender tree:

And finally some skills from Innovator tree: 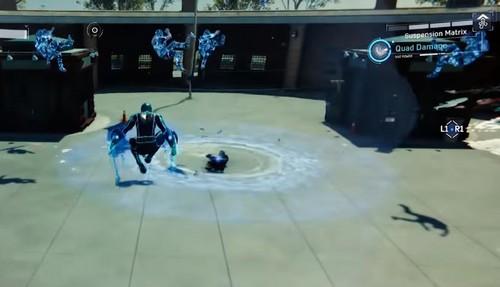 Web-Gadgets are basically consumable tools which will provide different benefits during battle. Therefore understanding each of these tools’ function is necessary to pull out best result:

Each of these gadgets has its own unique power; and knowing how and when to use these tools at precise timing is the key of success, especially in Challenges. For example: you can use Concussion Blast to push enemies off the rooftop, or you can throw Trip Mine onto the wall and watch enemies being pulled onto the wall. There are much potential to these items, waiting to be explored by players. And by the way, don’t forget that each of these gadgets can even be upgraded further with Tokens!

6. Grab your Suit Powers and Mods! 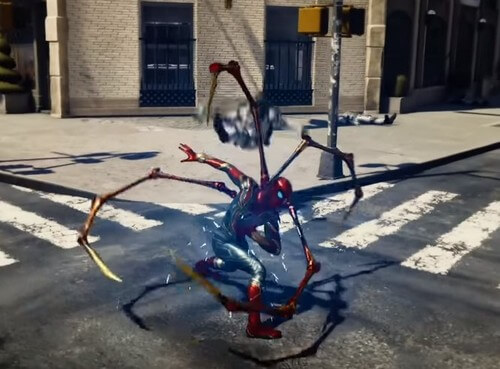 Suit Powers and Suit Mods are extremely handy upgrades for Spidey. And in certain occasion, your Suit Power and Mods set-up can create a big difference between winning and losing.

Suit Powers are active powers which are unlocked alongside with your Suits. But the best thing is: you can select your favorite Suit and your Suit Power of choice differently, which means: you can use a Suit Power unlocked from a Suit while wearing a totally different Suit. There are quite a number of Suit Powers you can unlock throughout the game so we will only list some of the best powers here: 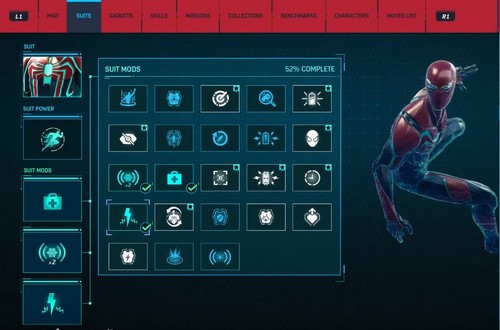 Aside the Suit Power, players can also equip up to 3 Suit Mods which are passive abilities. There are many Suit Mods, each provides different benefit and when you combine these Mods with the Suit Power, your Spider Man will become a true force to be reckoned with. Here we also have several recommendations:

You may also want to change your Suit Mods and Suit Power occasionally based on the different situations. For example, in stealth missions, you may want to grab stealth-oriented Suit Power and Mods like Sound of Silence Suit Power (unlocked by Noir Suit) and Silent Step Suit Mod. 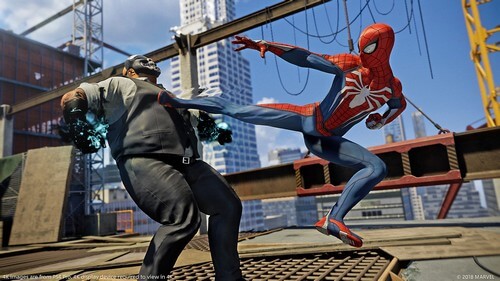 Create your own combo! (Source: Internet)

So now that you have seen different Suit Power, Mods, Web Gadgets, and Skill trees. As you progress throughout the game, you will find lots of interesting combo and combinations. This is probably the best thing about Marvel Spider Man PS4’s combat as it encourages you to experiment and think creatively. There are so many potentials here and you can combine together like:

Here are only some few combinations and of course there are even more things for you to try out. Keep experimenting and be creative and you will see how fun combat in Marvel Spider Man PS4 is.

8. Do side quests and activities… smartly

These side activities can be a nice change of pace. (Source: Internet)

To make your Spider Man PS4 experience as most pleasant as possible, we suggest mixing up your main missions and side activities. For example, after a long period of fighting in main missions and challenges, you may want to do some research activities for a change of pace.

And that’s it folks! Are there any Marvel Spider Man PS4 tips and tricks we missed?  Feel free to share with us and for now thank you and stay tune for more news in the future!