This anime season Fall 2017 has quite a fair share of interesting anime like Inuyashiki, Black Clover, Blend S, and Net-juu no Susume. But among those popular anime series, we have a particular, and also currently the top, anime which is attracting tons of viewers worldwide: The Ancient Magus Bride. If we find its review on the Internet, we will see tons of positive reviews. We too also find the anime attracting to watch and therefore, instead of having a review, why not take a deeper look and see why we fall in love it? So with no further ado, let’s get into The Ancient Magus Bride!

*NOTE: We’ve read both the manga and watched the anime and therefore, our opinions can have influences from the original manga.*

*Warning: There may be slight spoilers*

Table of Content:
1. The Ancient Magus Bride – An Unusual Romance
2. What Makes It So Attractive?
When Fairy Tales Coming to Life
An Unusual Romantic, Yet Heartwarming Story
When Two Childs Learning Each Other
3. Final Thought 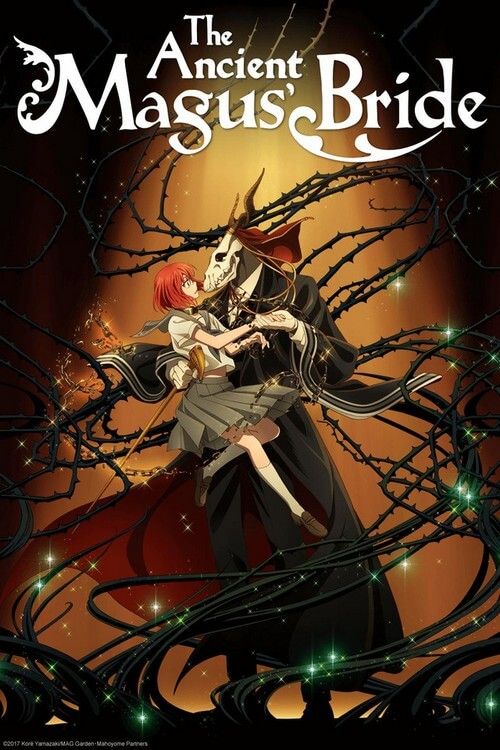 Have you watched Mahou Tsukai no Yome? (Source: Internet)

The Ancient Magus Bride (魔法使いの嫁), or Mahou Tsukai no Yome in Japanese, is originally a monthly manga series written by Kore Yamazaki. The manga was first released in 2013 and it is still ongoing even now. And right in this season Fall 2017, its anime adaptation started on October 7, 2017 and it will be a 24-episode series.

The anime tells the story of a young girl at the age of 16 named Chise. She had a particular “talent” which allows her to see magical beings, and at the same time, attracts them. While in the sorcerer’s world, this is considered as “talent” but in human world, this is like a “curse”. Chise had a rough childhood as her father and brother left the family, while her mother soon died after. Since she possessed that talent, people often neglect her, including her own relatives. As the results, Chise often lived in despair and hopelessness until one day a “weird man” bought her from the slave auction. The “weird man” turned out to be a powerful magus named Elias Ainsworth who is a humanoid being with a skull head. He bought Chise so that he could train her as his apprentice, and more intriguingly, he wants her to be his future “wife”. And so, the story of Chise begins as she lives with her “future husband” and taught to become a great magus.

2. What Makes It So Attractive? 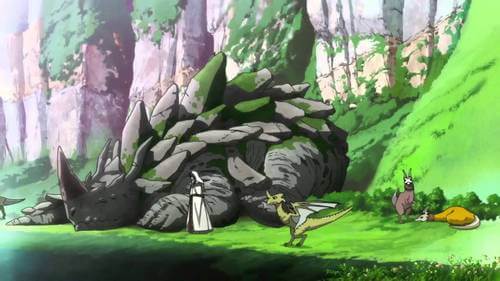 When we say The Ancient Magus Bride has lots of high rating, that doesn’t mean it gets 100% positive reviews. There some people consider the anime to be… average at best, while most people give it really high score. In this case, we are in the high-score side since we feel there are interesting concepts here and we would like to share them. Of course, these are personal opinions though, but as always, feel free to share your opinion with us!

So first of all, let’s talk about arts and sound since they are always the first impressions of every single anime. Let say Wit Studio really did a great job for this anime with the beautiful landscape and character illustrations. There is a bit different in details between anime and manga version but that happens to all anime. Overall, we really enjoy the artwork and animation here, especially the reactions between Chise and Elias. Sound and music are also excellent, especially the inspiring opening and ending music. But let’s be frank, arts and sound are not really the main things make us interested in Mahou Tsukai no Yome. For us, what makes this anime so charming lies within its own world building and story.

When Fairy Tales Come To Life

If you are like us, probably you are no strangers to fairy tales when you were kids. In these modern days, childhood seems to be made from modern games, cartoons, movies, etc… But back to the day, most people’s childhood sticks with different stories and fairy tales. These tales tell the about the magical world with lots of fascinating creatures, events, and even heroes. For those who think these fairy tales are history, think again since all of them actually still persist. They are inspiration for many modern stories we have seen today like Peter Pan, Little Mermaid, Cinderella, and more… The Ancient Magus Bride is also one such example as it brings this wonder magical world to life. In this case, we have to give credits to the beautiful arts which successfully recreated these magical lands: from the magical woods, the majestic Dragons’ Aerie, to ominous lake of Ulthar. 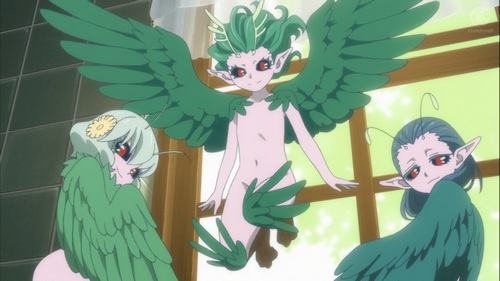 The fairies can be helpful, and mischievous at the same time. (Source: Crunchyroll)

Besides the magical landscape, the shining point of the anime is the re-imagination of various fairy tales and legends from real-life. It is quite interesting to see the author used many stories from England like the Fairy Queen Titania and the Fairy King Oberon of Tir Na Nog – The land of fairies. At this point, we commonly see magical beings called “fairies”, yet they are unlike our friendly and kind fairies. These fairies are somewhat mischievous and extremely curious about human, similar to their original real-life legends. The story of the dragons and their ties with nature are also interesting and well delivered in this anime. Such legend is not something entirely new here, but the way they deliver in the anime with the protagonist Chise is somehow touching indeed.

An Unusual Romantic, Yet Heartwarming Story

In such a well-built world with legends and fairy tales, a good main story is still needed for an anime like this one to succeed. And in The Ancient Magus Bride, the story is really… weird, yet heartwarming. 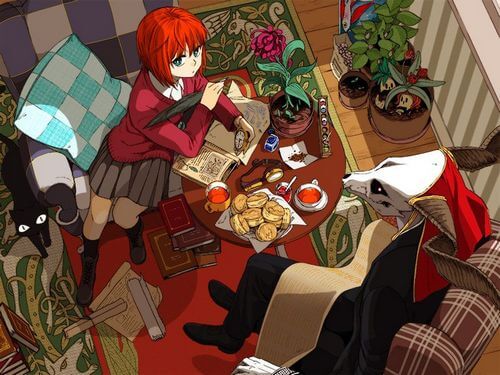 Right at the beginning, we are introduced with a main protagonist named Chise Hatori with a hard childhood. But then her life is saved by Elias, a non-human sorcerer who wants Chise to be his apprentice and… ahem, his “wife”. Okay now putting the “lolicon” element aside, this story is actually deeper than what we may think. It is not simply a pedo… love story. It is more a story of how a little girl recovers from her past and more importantly, the story of empathy.

Empathy plays a vital role in our life since it allows us to sense and understand other pain. It is an innate part of every single human being. And naturally, it is not a coincidence that we feet happy when see other people happy. We also feel sad when our beloved person has bad experience, which makes us want to make him/her feel safe tell him/her that “Everything is gonna be okay.” This empathy trait isn’t limit to real-life human, but also applies to anime characters like Chise. And personally, we think that’s why many people, including us, feel so attached to this anime. We feel sad when knowing Chise’s bad story and inside us, we also want her to be happy. When a character like Elias takes care of Chise, we feel happy since we know there is a certain person does good things for her. It is quite interesting to see empathy element strongly vibrates in this anime, and it successfully touches the viewers’ feelings. 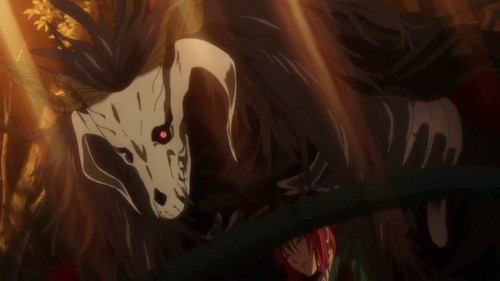 We also appreciate the author for bringing lots of dark stories and secrets. The Ancient Magus Bride doesn’t simply bring us a purely happy story. It has many dark moments and it somehow reminds us of real life: The world is both beautiful and painful at the same time, but nonetheless, we all still wish to keep on living and enjoy our life. This anime also creates the same feeling: it is both happy and dark, but characters still thrive to live on for their dreams. In addition, these dark stories serve to balance out the bright side of the story. It makes the anime doesn’t feel like a cliché romance, it has conflicts and dangerous threats which greatly portrays character developments.

The Story of Two Childs 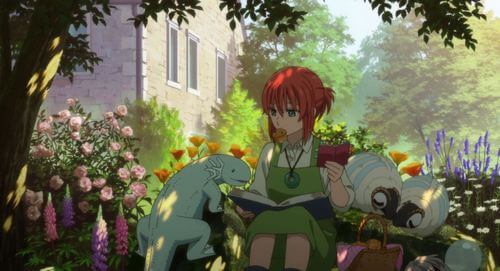 Some people may dislike Chise since she often thinks herself as worthless and she doesn’t have any self-confidence. But we believe this is exactly why Chise feels real and fits in this story. In reality, people like Chise are actually not rare if we pay attention. While many of us have happy life with happy childhood, many others have extremely terrible childhood of being neglected and insulted. It is true that certain people have strong characteristics, but let’s not forget that our world also has tons of prejudices and harsh opinions about things (typically racism and color discrimination). Such prejudices and discriminations always have influence in our life, no matter how strong our personalities are.

For a child like Chise, prejudices and discriminations equal to destroying her value and it already happened to real-life children. Children are easily influenced by the words surrounds them, and naturally, an abused child often has bad beliefs about themselves. Chise in the anime also suffers from the same problem. She is neglected; she is discriminated due to her “talent”. As the results, she hated this life as much as she hates herself. But in the end, she doesn’t really hate this life. She truly wants to live and appreciate this life and she needs a chance. 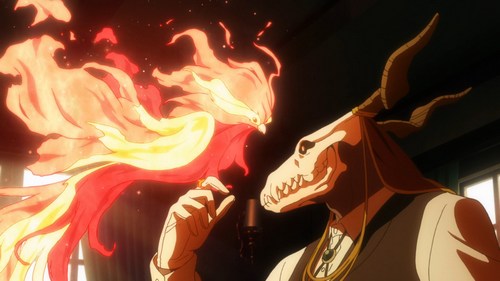 He is a great magus, yet also a “young boy” inside. (Source: Internet)

So what about Elias? Why we called Chise and Elias as “two childs”? The thing is: Elias is a big sorcerer on the outside, but from the inside, he is like young boy. It’s true that we haven’t known much about him, besides he is a powerful sorcerer. But at the time, we know that he is not really welcomed by many other magical beings, wizards, or sorcerers. And more importantly, he is somehow like… a young boy who is trying to learn human’s emotions. The more we watch him, he seems to be capable of having emotions, but he can’t understand such emotions. For this reason, he often has hard time in dealing with his own emotions, yet he doesn’t try to open up in emotive situations. This makes Elias and Chise actually a fine couples as they both learn from each other. While Elias gives Chise a family and helps with her “curse”, Chise teaches Elias what he desperately wants: sense of emotions and maybe, sense of happiness. 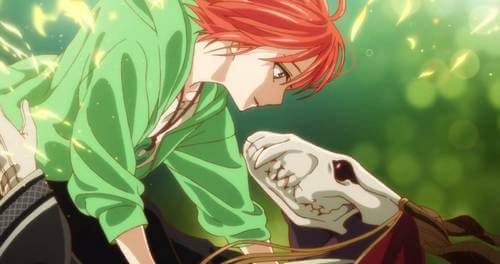 What do you think about The Ancient Magus Bride so far? (Source: Internet)

Now, this is not an all-out review. Here we would like to share what we feel about the anime and what affected us. Overall, we really like the anime, it is a heartwarming story but also somewhat realistic at the same time. The anime doesn’t feel like a love-story-cliché package, it has dark elements and conflicts in it. The characters are actually somewhat relatable and their character development is interesting, especially Chise and Elias. Of course there are only 7 out of 24 episodes released so we can’t really give out our opinion about the anime in general. But so far, we feel happy with it and we would recommend it to all anime fans, not just those who prefer romantic story.

What about you? What do you think about The Ancient Magus Bride? Feel free to share with us and for now, thank you and stay tune for more news in the future!