DC Extended Universe (DCEU) seems to get more serious this year with their two announced upcoming movies: Aquaman and Shazam. And since we have quite a good idea about Aquaman already, it’s time to get to know our next awesome DC hero – Shazam! So, what things we know about DC Shazam movies so far? It is time to check out!

Table of Content:
1. Who is Shazam?
2. Things we know about Shazam movie so far 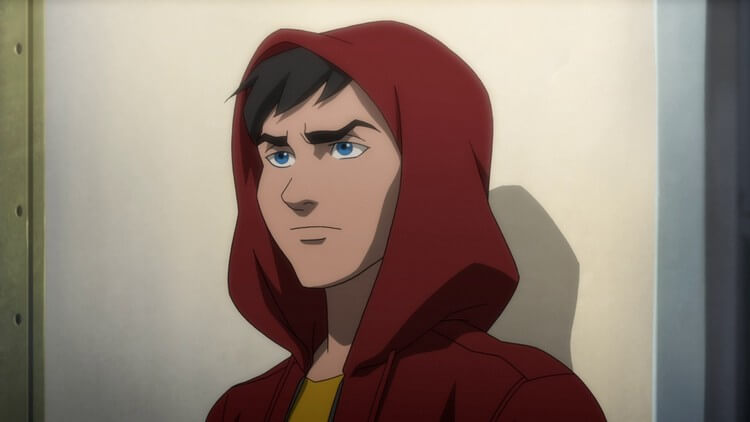 From this… (Source: Internet)

Shazam, or Captain Marvel, is a superhero and also protector of Fawcett City. And in case you don’t know who this hero is; Shazam is in fact a mortal teenager named William Joseph “Billy” Batson. Originally, Billy Batson and his sister Mary were born in to archaeologists C. C. and Marylin Batson. But one day, their parents were killed by Black Adam during their excavation at the tomb of Rameses II in Abu Simbel, Egypt. Soon after, Black Adam also kidnapped Billy’s sister Mary. 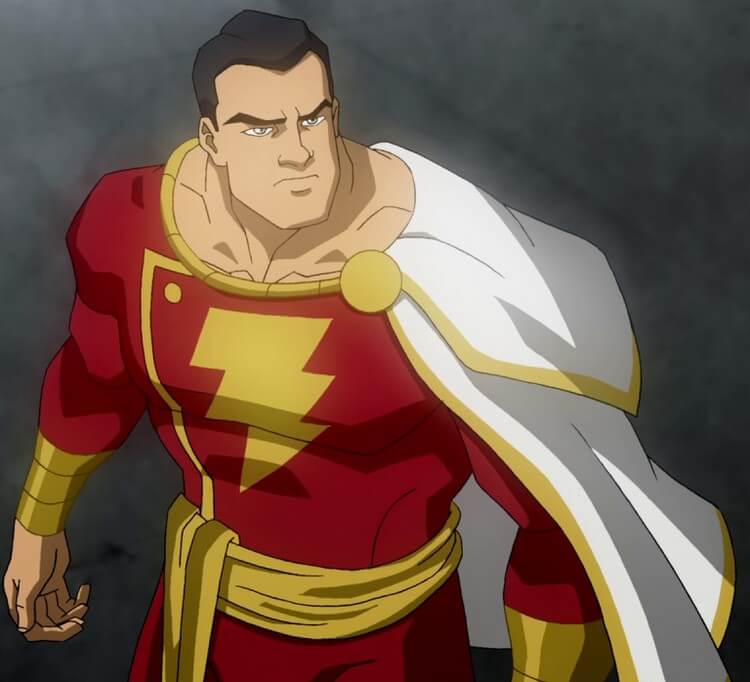 Left alone, Billy had to survive, leading to his cold personality. He was fostered in many homes, until finally he was adopted by the Vasquezes family in Philadelphia. At first, Billy had a serious issue with people in the family. The tension grew so high that he decided to leave the family, unknowingly that his fate led him to the ancient Wizard Shazam. The Wizard chose Billy as his champion, giving him the power of Shazam which activates every time he says the Wizard’s name.

Soon, Billy Batson (or the current champion of Shazam) had to face Black Adam. Black Adam totally had the upper hand until Billy Batson cleverly tricked him into transforming into his true form. Feeling rage and entitled, Black Adam did so and unexpectedly killed himself since his true body was withered hundreds of years ago. 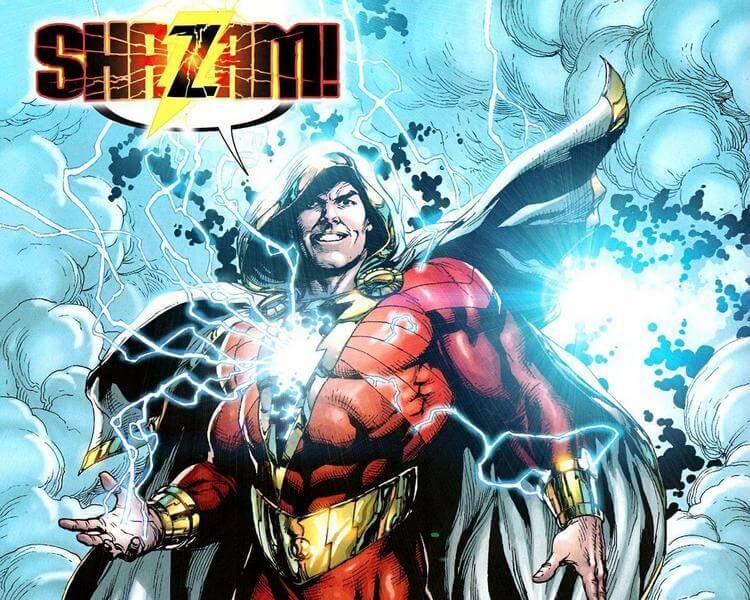 As mentioned, Billy Batson’s power comes from the magic word: SHAZAM. When calling the name, Billy’s body becomes like that of an adult and gained tremendous powers. These powers come from six famous entities, specifically:

If we pay closer attention, we will see that the name of six gods forms the word: S.H.A.Z.A.M. In short, Billy Batson becomes a mortal blessed by six gods at the same time. He is literally like a god himself and probably his most dangerous weakness is his true age. Despite transforming into an adult, his mind actually still remains as a teenager.

In official DC Comics, after Justice League and the Darkseid War, Billy Batson’s connection with the Old Gods was lost. But, it also gave him a new opportunity to become the God of Gods. Once again, Billy Batson became Shazam, but with the new blessings of New Gods: S’ivaa (Strength), H’ronmeer (Fires), Anapel (Compassion), Zonuz (Source Manipulation), Ate (Boldness), and the Wizard Mamaragan (Lightning).

2. Things we know about Shazam movie so far

Shazam movie is directed by David Sandberg, and Henry Gayden and Darren Lemke are behind the script. So far the actors for three major characters were already confirmed:

Billy Batson and his new family 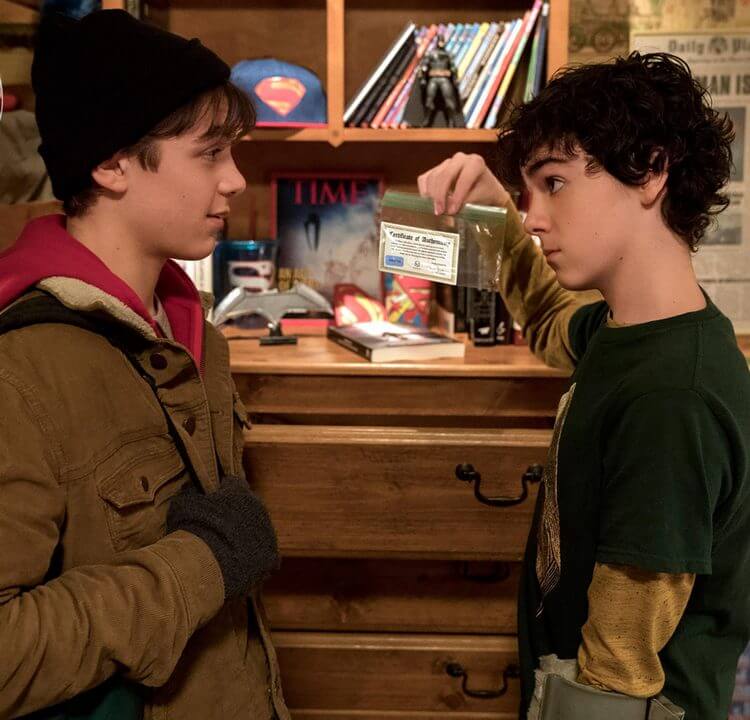 Judging from the trailer, it seems young Billy Batson (Asher Angel) – Shazam (Zachary Levi) will have pretty much similar story to his original DC Comics, but with a few tweaks. For starter, Billy Batson is still an orphan child who got fostered a number of times. He is finally welcomed in a new family and met a new friend (whose name has not been revealed yet). Billy still maintains a cold attitude towards everyone; however, he proves himself to have a courageous and good heart as he beats 2 thugs who bullying his friend. As he runs away to a train, he realizes something is wrong. 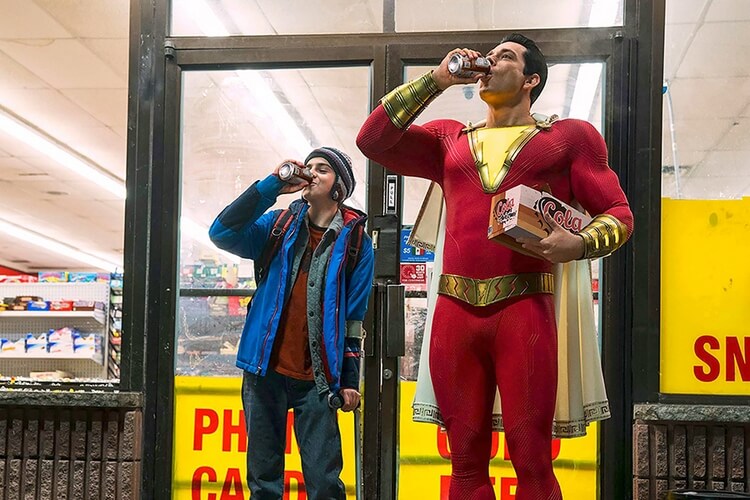 Turns out, the train “magically” transports him to a lair of a mysterious wizard. The wizard wants Billy to be his champion and by saying the wizard’s name – “Shazam”, Billy realizes his body is transformed. Feeling confused of what’s going on, Billy comes back home under his new appearance as Shazam and met his friend. Believing that his friend is knowledgeable in superhero stuffs, he asks his friend to figure out what he needs to do. And so the path of Billy Batson to become a hero begins.

The movie is not all about seriousness and dark story 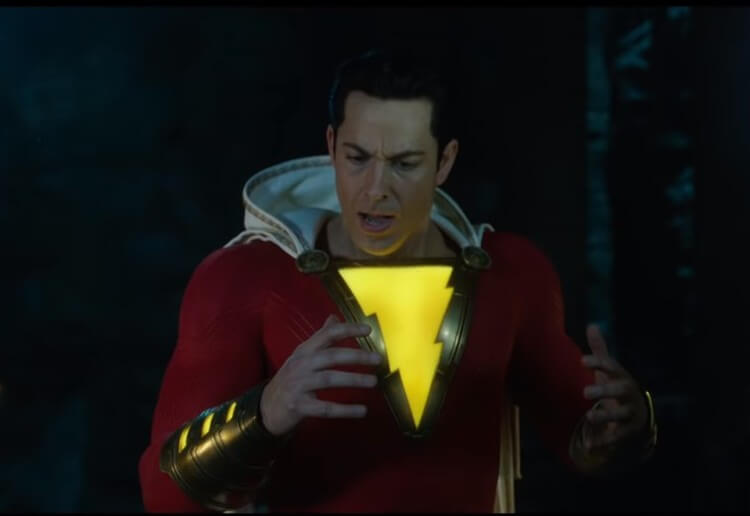 How does it feel when becoming an adult? (Source: Internet)

DC movies have always been dubbed as “dark-tone superhero stories”, unlike Marvel movies which are funnier and more friendly. However, this upcoming Shazam movie will be different; it will not be as dark or serious as what people think. 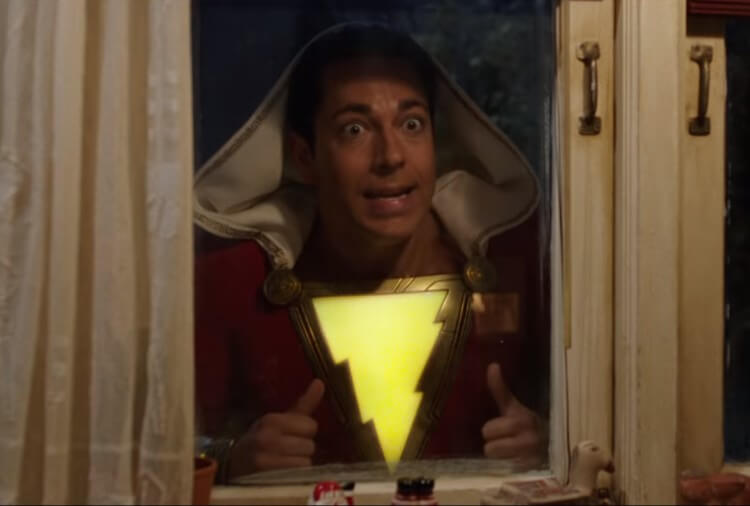 When you want to call your friend out for a drink. (Source: Internet)

Based on the trailer, the Shazam movie seems to lean more towards humors and jokes, which actually makes lots of sense considering the main character’s age. Even though this is a superhero movie, let’s keep in mind that Billy Batson here is only teenager. Even if he transforms to his adult form of Shazam, he is still basically an adult with the mind of a child. Therefore, it is logical for Billy to joke around and act silly even in Shazam form. Jokes and humors feel on point especially when Billy – Shazam get along with his friend. These jokes so far are fitting with teenager age group. In fact, both Billy and friend are teenagers and both are fascinated with Shazam’s power, which is natural for these are 2 kids. 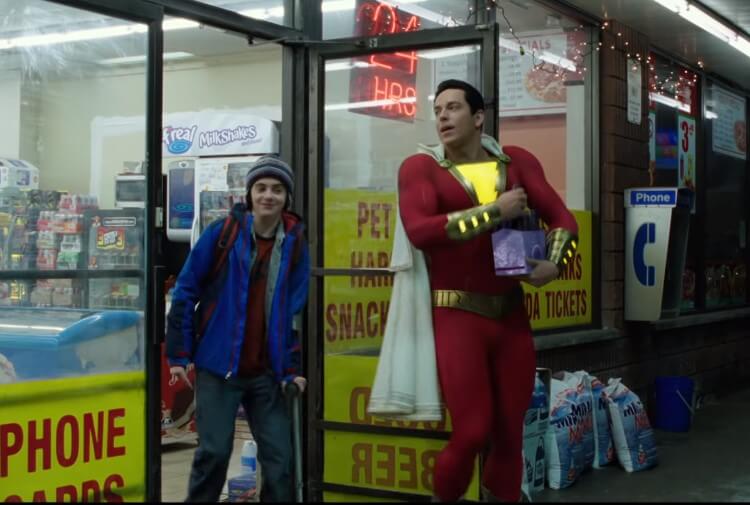 The best news is that both Angel and Levi did a great job in portraying this sort of childish, teenager-style of humor. Levi truly feels like a “grown kid” rather than an adult and it works perfectly in this case. And since Angel is a teenager himself, watching him playing as young Billy feels really believable. Personally we love the dynamic between young Billy – Shazam and Billy’s friend. And it should be fun to watch their friendship grows over time.

Sorry there will be no “Dwayne ‘the Black Adam’ Johnson”

Fans of Shazam definitely know Black Adam, Shazam’s arch-nemesis and also his “supposedly predecessor”. The story of Black Adam is quite a tragic tale, but unfortunately, we will not get to see this story portrayed in the upcoming Shazam movie (though he may appear as cameo hinting for a Shazam sequel movie). Instead, we will meet Shazam’s other arch-nemesis – Dr. Sivana, who will be played by Mark Strong. 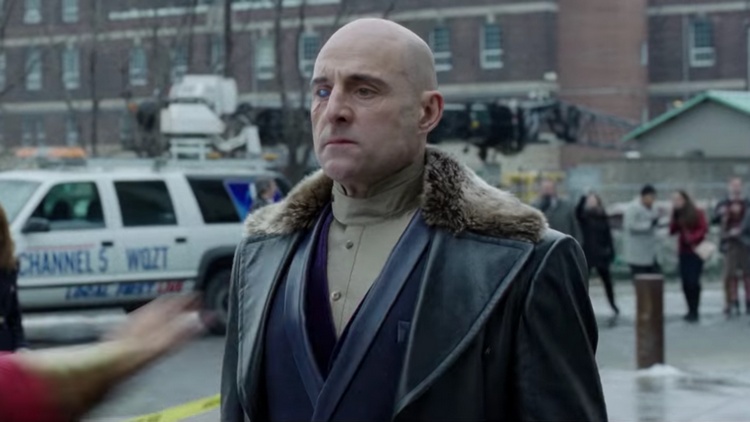 In the comics, Dr. Sivana was the wealthiest man in Fawcett City and also among the five most intelligent people on Earth. He is a genius scientist who has invented lots of weapons by himself, many of which were used to defeat Captain Marvel a.k.a Shazam. But none of his effort of defeating Shazam availed. In this Shazam movie, Dr. Sivana probably will have the same background. But so far we don’t know what sort of calamity this guy will bring.

Shazam movie will be connected to DCEU 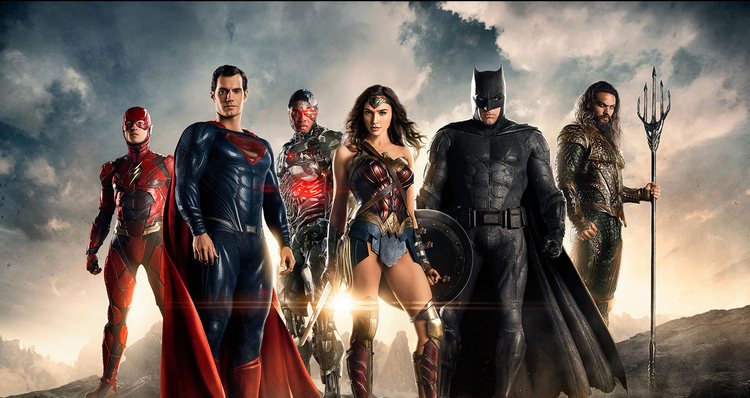 When we will see Shazam joining Justice League? (Source: Internet)

Back in August 2017, it was confirmed that this Shazam movie will be connected to DCEU. However, we still don’t know how it will be connected exactly. Since Shazam 2019 is about Shazam’s origin, we doubt that audiences will get to see other superheroes cameo in this film, except for…

Superman is rumored to appear in Shazam 2019 as cameo 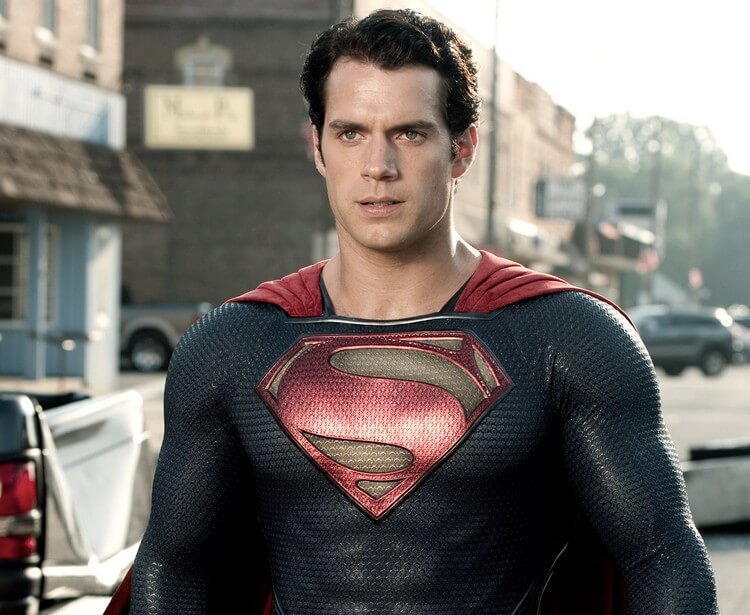 This is still rumor, not confirmed information. However, it actually makes sense for Henry Cavill appear in Shazam movie as Superman. Based on Cavill’s contract with Warner Bros., he only has 1 more movie left and appearing in this movie should fulfill his role.

When it will be released? 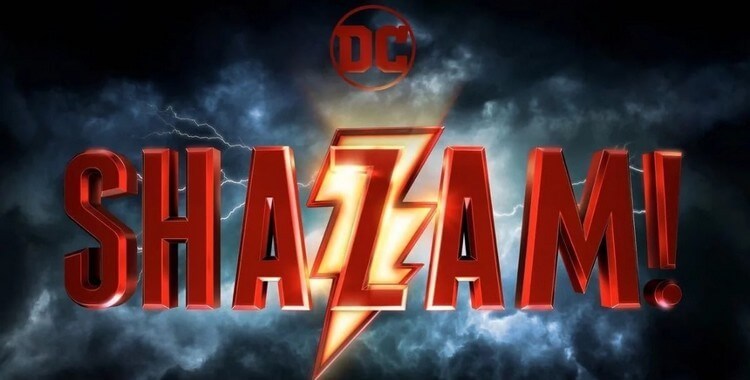 Are you hyped for Shazam 2019 movie? (Source: Internet)

And that’s it folks! What do you think about Shazam 2019 movie so far? Feel free to share with us and for now, thank you and stay tune for more news in the future!