Denmark is the land of wonders with beautiful landscape, cool toys (LEGO, anyone?), awesome actors (like Mads Mikkelson). Not only that, it is also the home of an incredible Danish car manufacturer – Zenvo Automotive. Their aim is to forge powerful supercar/hypercar with extreme potency, kicking off with Zenvo ST1 and later on Zenvo TS1, along with the TSR version. To be honest, Zenvo had quite a rough start with the ST1, but that did not stop them from moving forward. And today, Zenvo has introduced their newest demon in town: Zenvo TSR-S. How far Zenvo has progressed with this new model? There is only one way to find out: Here’s the Zenvo TSR-S review! 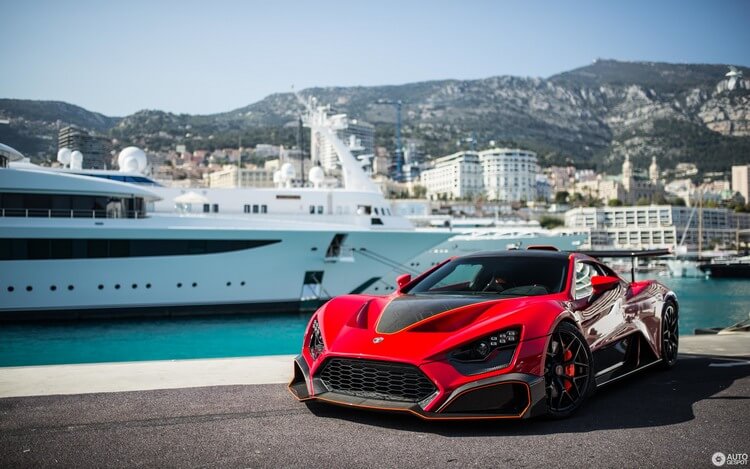 Talking a bit about Zenvo, Zenvo Automotive was founded by Troels Vollertsen in 2004 and its name actually came from the last 3 letters and the first 2 letters of his last name. They are somewhat similar to Koenigsegg, both aim at producing extreme supercar/hypercar and both do the majority of the works on the car themselves.

Before the TSR-S, Zenvo developed their first car Zenvo ST1 and later on, Zenvo TS1 (“TS” stands for “twin supercharged”) with TSR (“R” stands for “race”) variation. Both cars are extremely potent and each model only has 15 cars planned and produced. The latest model TSR-S (“S” stands for “street”) can be considered as the street version of the TSR, yet with more enhancements and upgrades over the original. Despite the being a street-legal model, the TSR-S is still a hardcore track experience with full carbon-fibre body. It looks more like yearning for battle on track, not having a pleasant ride on road. 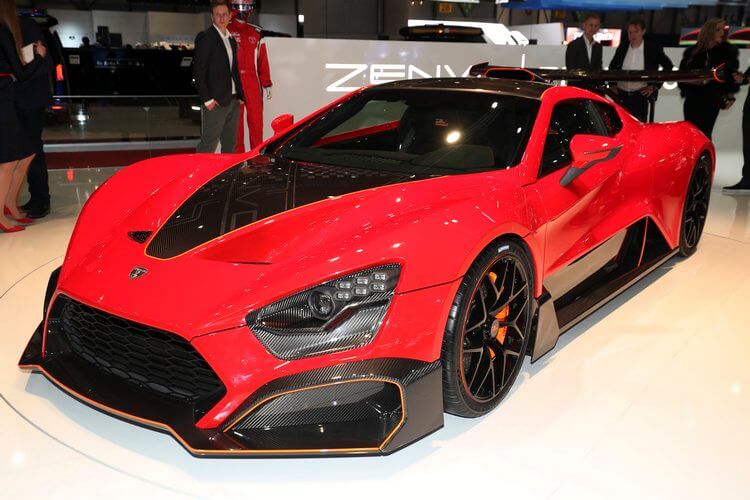 Check out that aggression! (Source: Internet)

Right off the bat, Zenvo TSR-S brings on the table a full carbon-fibre feast with extremely aggressive styling, aggressive shape. Its base is borrowed from the TSR, but there are certain differences, most notably the new nose and front bumper section. Just like the previous Zenvos, the TSR-S features a huge grille, yet unlike the TSR, it is a bit larger and it now extends all way down to the splitter. Furthermore, there is a huge attention of aerodynamic details here. It features huge cooling on the front, and then the high-pressured air is released from the aggressive side vents and directed to the rear for cooling again. In addition, that scoop on the roof also helps cooling for that monstrous engine. The new design also allows better downforce distribution between the front and the rear by creating front downforce and directing the air to the underbody. The front bumper and wheel outlets also get new upgrades for better air stabilization around the wheels. 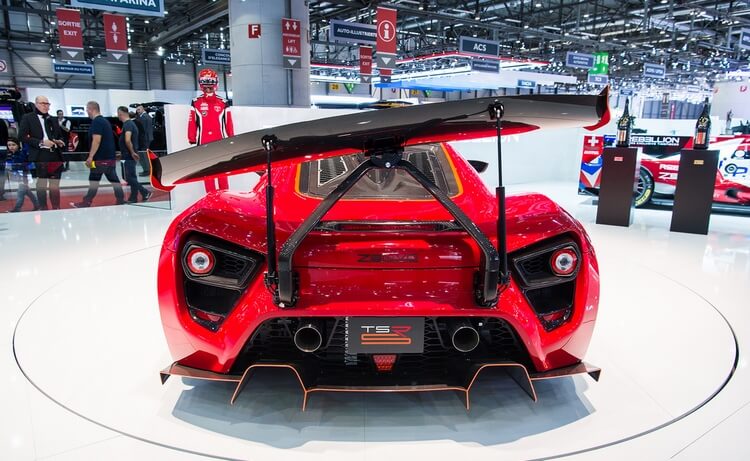 Now, let’s come to the rear and talk about that massive, unique rear wing. As you may notice, this wing is unlike anything we have seen before. Not only it serves as air breaker, but also works as cornering stabilizer by pivoting from side to side to help with the downforce. This rear wing is called, as Zenvo prefers, “centripetal wing.” According to Zenvo:

– “The name ‘Centripetal’ refers to the centripetal force also known as ‘centre seeking’ force. When in an absolutely horizontal position, a conventional rear wing generates a downforce perpendicular to the horizontal position of the wing: absolute vertical. When the centripetal wing tilts away from the absolute horizontal, the downforce stays perpendicular to the plane of the wing thereby generating a centripetal force. This centripetal force reduces the tendency of the rear end to break away – a trait that is inherent for a mid-engine car. Furthermore, the high pivot point of the wing allows it to act as an additional rear anti-roll bar. This provides additional grip to the inner wheel, reducing the chance of a loss of traction at the rear.”

Now that is a lot to comprehend but in our understanding: During cornering, one side of the rear wing can rise up to keep the air far from the car, so that the air is cleaner can be used better for downforce. On the other hand, it also keeps one side down to the ground; giving more stick and helping the tires to work even better. It does resemble the ALA rear wing from Lamborghini, but here, it is more openly presented. 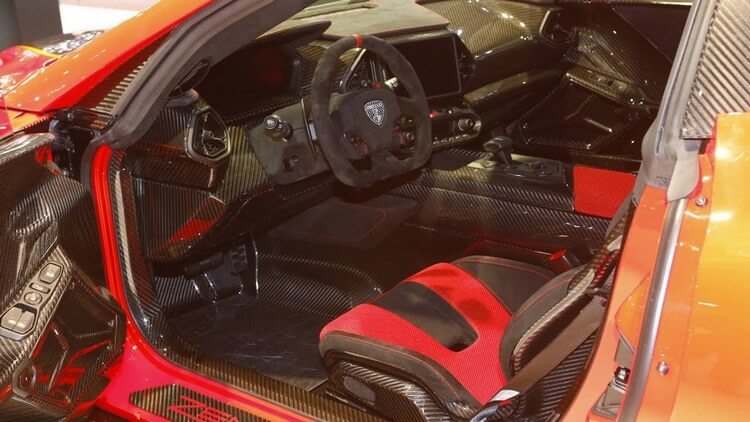 Getting inside Zenvo TSR-S, again what we see is an extremely aggressive, minimal style of design. The interior fills with tons of carbon and hexagonal theme, which somewhat reminds us of Lambo. Most of the interior details from screen graphics to the doors seals were done in-house. 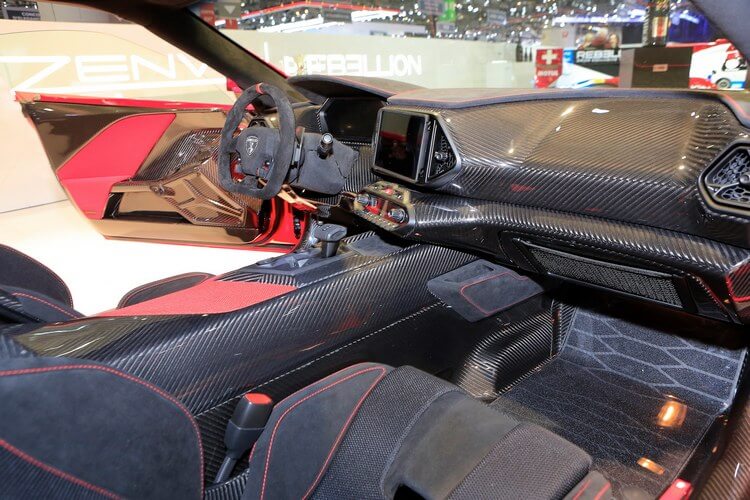 Everything resonate a strong vibe of rawness and hardcore power of a track-focused supercar. There is even no air-conditioning, radio, and air bag. Due to the lack of air-conditioning, it can be very hot inside the TSR-S. While this may sound like a lack of consideration in design, let’s keep in mind that this car is designed to cope with Danish’s cold climate. For even more hardcore-racing/track vibe, the TSR-S uses the TSR-inspired steering wheel with racing-styled switches. 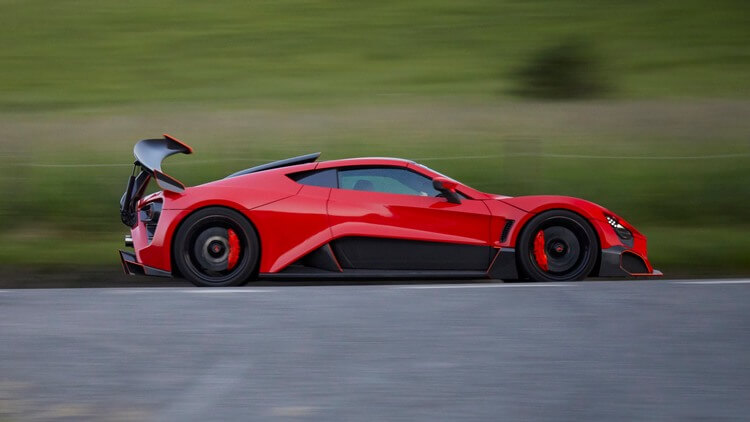 For the engine, Zenvo TSR-S still utilizes the good ol’ twin-supercharged 5.9-liter V-8 engine. This monster heart can deliver an insane 1,177 horsepower. The demon can blast the track from 0 to 62 mph only within 2.8 sec, and from 0 to 124 mph within 6.8 sec. The top speed is limited to 202 mph, which may sound underwhelming compared to the likes of Bugatti Chiron or Koenigsegg Agera R. However, this does not mean that it lacks the powerful sensation we are looking for. In fact, the TSR-S feels so ferocious, so aggressive that everything we can say is: “…Wow!” Not to mention its sound, this sound feels so loud, so sensational that we definitely do not want to fire it up during 5 – 6 AM. Sound is indeed an important part of the experience here. And when this demon hits the road with that hellish scream, we cannot help but become speechless and excited with its performance. For this reason, the more we look at the car, the more we feel like it is begging to be able to take flight on track despite its viability on road. 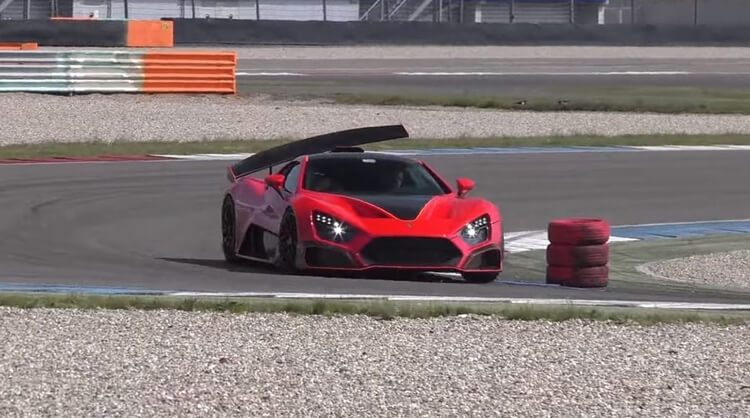 Look at that wing in action! (Source: Internet)

Aside from such demonic capability, Zenvo did come up with a pretty interesting gearbox concept, which is the synchronized race-style dog box. In details, the gearbox features a 7-speed paddle shift gearbox combined with with helical-cut dog gears. This helps including an unique dual setup to Zenvo, which can change between standard setup for road-use and brutal power-shift setting for track-purpose. And while this system may not feel as smooth as the Chiron’s, it will require some work and learning to master.

Going along with this gearbox are the 3 modes: Road, Race, and IQ. In Road mode, the gear changing becomes electronic with shifting-adjusting sensors to remove the harshness for a more pleasant experience. In Race mode, the direct mechanical power-shift provides even more brutal, faster-shifting powertrains. Interesting enough, the final IQ mode activates a smart system which works with the stability control to provide power depending on the current condition. 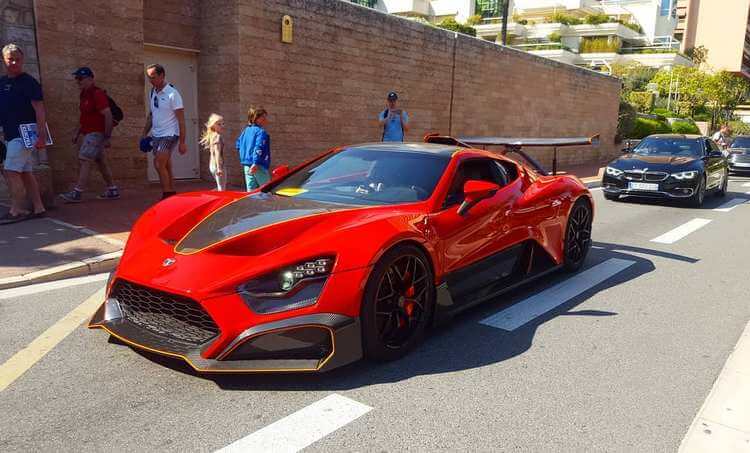 What do you think about Zenvo TSR-S? (Source: Internet)

At the expected price tag of around $1,500,000, it is hard to say whether the Zenvo TSR-S is worth it or not. That being said, we cannot deny all the innovations and efforts Zenvo has put into the TSR-S. This demon possesses all capabilities to become even more powerful, more usable road-legal track monster. It was designed with racing-focus and with enough polishing; it will be something truly extraordinary.

With that given scenario, we are excited to see what Zenvo will bring on next in the future. And for now, thank you and stay tune for more news the future!