2018 means the beginning of a new era is coming close. And new era also means it is time to embrace the new changes, even if we have to cast aside all the current standards and norms. Such was the goal of McLaren when they developed McLaren Senna – the ultimate road-legal hypercar, which is expected to deliver an experience we all have never tried before. Although the tested Sennas were still prototype models, they have already shown their out-of-this-world capability. So with no further ado, let’s find out what McLaren Senna has in store! 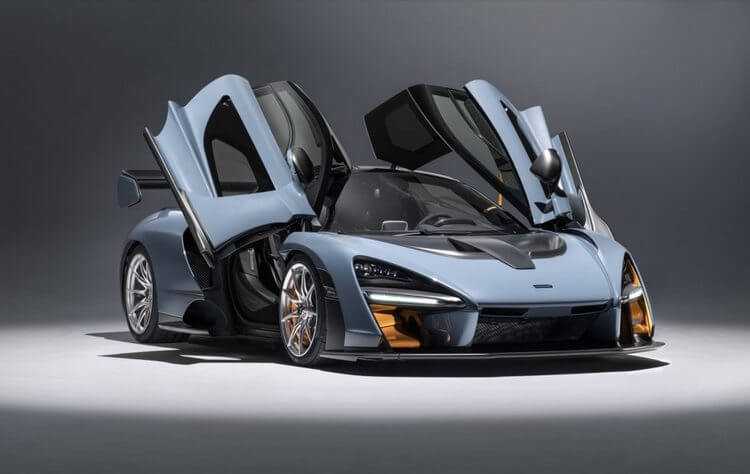 Those who are into racing world will never, ever forget the name of the legendary Formula One driver – Ayrton Senna. This talented Brazilian racer won Formula One world championships for McLaren in 1988, 1990, and 1991. Even now he is still revered as the greatest Formula One racer of all time. Therefore, it is only natural for McLaren to put this ultimate hypercar in honor of his name.

The Senna is the second member of McLaren’s Ultimate series, following the iconic McLaren P1. This full-carbonfibre-body beast indeed stays true to its claim: furious, relentless, along with the indescribable experience. In the first run, you may think the Senna to be unremarkable. But once you embrace its true power, its crazy downforce, braking and handling capability will destroy any stereotype in mind and bring you to whole new dimension. 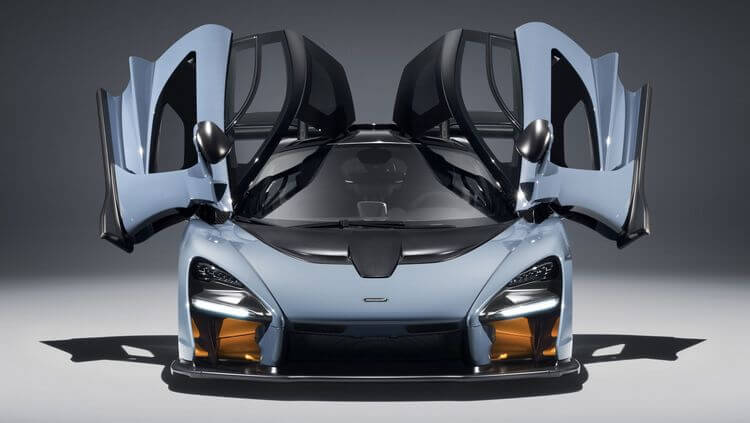 While McLaren Senna’s appearance may not look as much impressive for certain viewers, its real deal lies within the extensive aerodynamics throughout its every nook and cranny. As engineering design lead Dan Parry-Williams stated, it is about “aerodynamic element by aerodynamic element” through and through.

Starting with the front, there are already so many details we can talk about, for example: If we look underneath, we will see a wide duck where the air can flow in to the windshield, then go around the car. And at the same time, we can also spot 2 nostrils which channel the air within them and lead to the sides. In addition, the front features huge nose bridge which leads the air up to the roof snorkel to cool the combustion engine. The front gurney flaps also play a role in redirecting airflow through the undercuts to the side high-temperature radiators. Now, let’s take a look at the headlights. Notice that there are active aero-blades below which work perfectly with the rear wing to create downforce. And during the braking, they will reduce downforce and prevent pressure. 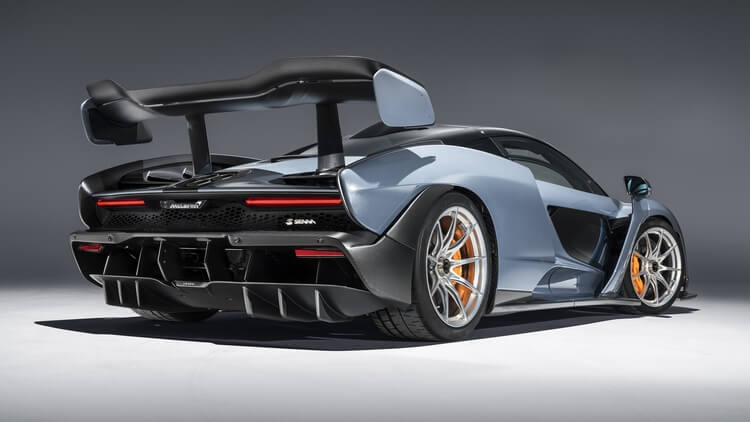 Coming to the rear, obviously the massing rear wing is something we can never miss. First off, it includes the end-plates which will ensure the air to flow underneath it. Second, let’s pay attention to the wing’s swan-neck design. This means it is held from above and it helps to keep the underside clean, thus, maximize efficiency. Both the rear wing and the front aero-blades are computer controlled to change the downforce distribution. Aside from the rear wing, there are other details like the gurney flaps on rear deck to keep low pressure for back area, so that hot air can get out as quickest as possible. The back is also designed to have the most opened space possible. And interesting enough, the exhaust system is put on the rear deck and held upward, rather than the standard exhaust many other cars have.

Considering the aerodynamic purpose, McLaren Senna is indeed one hell of a sculpture. But what about the interior? 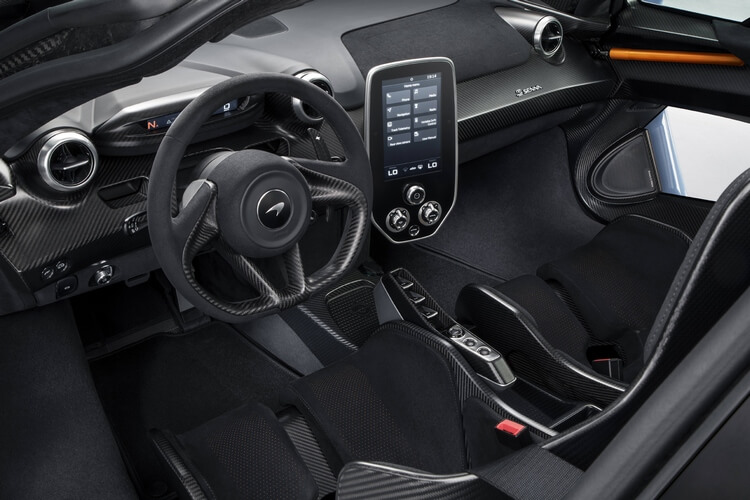 As mentioned, the entire Senna’s body is full carbonfibre, including the new Monocage III chassis. It is arguably the lightest among all McLaren with only 1,180kg of dry weight. Right off the bat, we can quickly feel how light the car’s door is since it only weighs around 9kg. Everything within the interior is optimized to save weight. There is literally no luggage space, except for the compartments behind the seats for 2 helmets and 2 race suits. The movable seats are only covered with 7 Alcantara pads, and the seats are extremely light with only less than 8kg of weight.

When we finally get in the car, we will notice that the ignition button, along with race mode, light and door control are actually reallocated to the roof. Back to the steering wheel, we will see the folding screen turning up just when we start the engine. If we change to Race mode, the screen will fold down again and only show minimum display. Looking around, the Senna interior really feels like a futuristic spaceship with all the glasses from the door windows to the roof, and even the window near the leg space. Everything feels incredible, and especially when we start to accelerate, the real fun will begin! 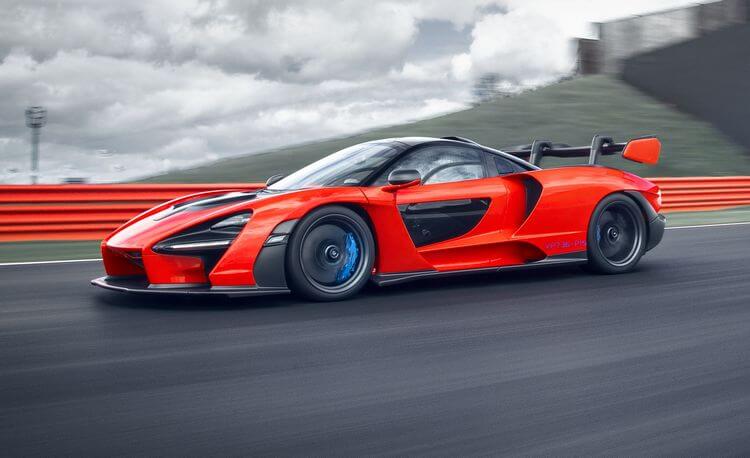 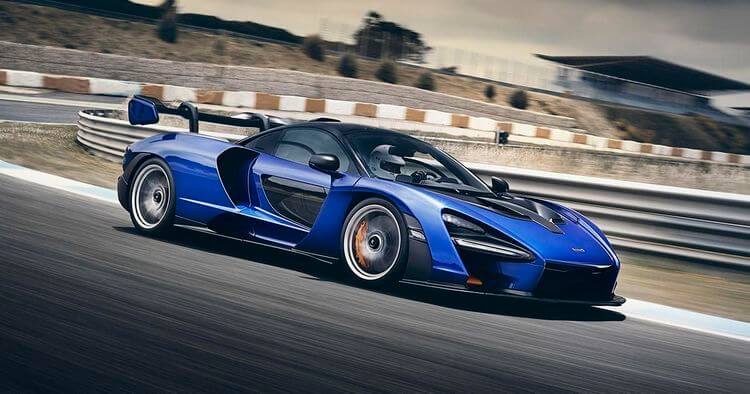 In terms of power, the McLaren Senna is equipped with the mighty 4.0-litre twin turbo V-8 engine, which can deliver near 800 horsepower and 590 lb-ft of torque. Just when we start the engine, we can already feel the hype from this beast. It feels so raw and when we hit that acceleration, it even feels much crazier. It only takes 2.7 sec to blast the track from 0 to 62 mph, 6.8 sec from 0 to 124 mph, and 17.5 sec from 0 to 186 mph.

That may sound impressive, but to be honest, the horsepower is the least significant thing for the beast of this caliber. In truth, its real shining points are the insane downforce and the mind-blowing brakes. This insane McLaren can generate 800kg of downforce at 155 mph. And after exceeding that 155 mph threshold, the active-aero system will bleed off the downforce. Crazy indeed! But that is only a part of the Senna’s power, next, we have to talk about the brakes!

The McLaren Senna uses the McLaren’s RaceActive Chassis Control II suspension, which is an evolution from the P1. And more importantly, it uses CCM-R technology brake which is the hybrid between full- carbon-ceramic rotors and the carbon-carbon units. As McLaren claimed, the result is absolute nuts: in 124 mph, it can standstill in just 100 metres, and less than 30 metres to stop from 62 mph.

In reality, the Senna’s brakes have proven such claim to be true after all. Even in 150+ mph speed, we can just smash that brake it can still take a corner. For some reason, we always feel like braking too early even in such high speed. Braking with the Senna is just… breathtaking… it feels so confident, so stable. We can’t help but to wonder how far this beast can go as it keeps encouraging us to go faster, deeper.

Soon, we realized that this car is not all about performance. It is for the incredible experience, so incredible that it feels unlike anything we’ve seen before. Fire up! Cornering! Then accelerate!… This fast and furious acceleration combining with this unbelievable breaking is so good, it is addictive! The Senna is like a key of discovering and breaking through our limits. There is clearly a learning curve here but no matter how we look at it, McLaren Senna is indeed a beast worthy of its namesake.

Through and through, McLaren Senna is a crazy road-legal track hybrid filled with exceptional driving experience. It breaks all the boundaries and keeps us questioning about the true extent of its capability. Put your trust onto the $960,000 Senna and it will give you something you have never tried before. The only downside is: it may not include you in it since only 500 Sennas were produced and sold… Except if you are among those customers.

And that’s it folks! What do you think about the McLaren Senna? Feel free to share with us and for now, thank you and stay tune for more news in the future!

One thought on “Prototype McLaren Senna Review: The Ultimate Passion!”