Table of Content:
1. The Coming of Barbatos
2. What is the Dark Multiverse?
Batman the Red Death
Batman the Murder Machine
Batman the Dawnbreaker
Batman the Drowned
Batman the Merciless
Batman the Devastator
Batman Who Laughs
3. Final Thought

1. The Coming of Barbatos

The main focus of this Dark Nights Metal seems to be about Batman and his family’s most terrifying secret with Barbatos, a bat demon-god featured in Dark Knight, Dark City by Peter Milligan in 1990. In this old story, the demon Barbatos set up plan for Batman, and possibly the Dark Multiverse as we see today. 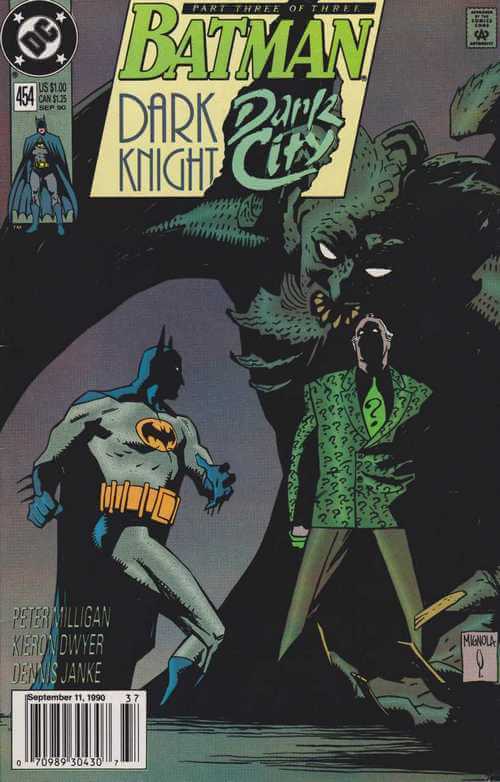 In Dark Knight, Dark City, The Riddler found journals of Jacob Stockman who worked with Thomas Jefferson and some other people to summon the great demon Barbatos. Though they succeeded in summoning Barbatos, they ran and sealed the demon inside a barn. The Riddler believed that the demon was still alive and he was controlled by the demon to lure out Batman. Barbatos told that it was him who manipulated various events in Gotham, including the death of Bruce Wayne’s parents. For this reason, it is not an over-exaggeration if we say it is Barbatos itself who built Gotham as today.

The Origins of Dr Simon Hurt 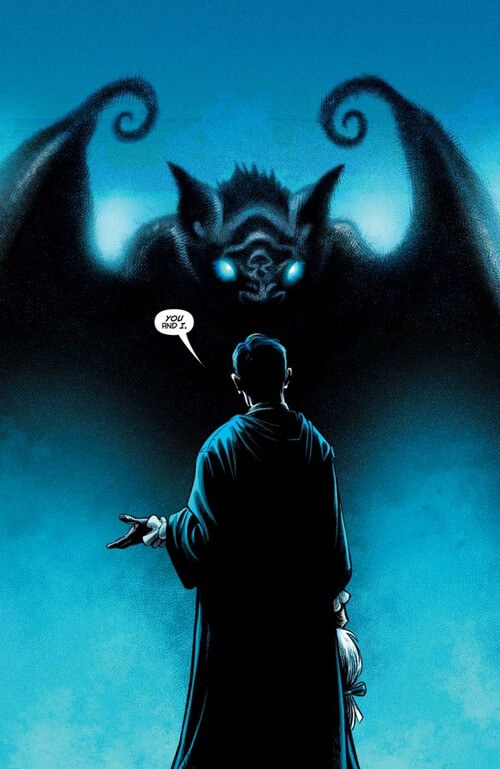 Years after Dark Knight, Dark City, Morrison told another story in which Batman was thrown back to the past in 18th century. It was discovered that Thomas Wayne, Bruce’s ancestor, also took part in the summoning of Barbatos. Yet, what came out from the summoning ritual wasn’t Barbatos but rather, Hyper-Adaptor. While other participants ran away from the barn, Thomas Wayne made a pact with Hyper-Adaptor, giving him immortality and becoming Dr Simon Hurt.

Overall, Barbatos is an old demon in DC Universe and this time, he’s going to return and bring doom to Batman. According to the first two Dark Nights Metal issues, it is said that Barbatos has been watching Batman for very long time. And now is the time for his plan to set in motion, with the help from his Batman’s nightmarish legion.

2. What is the Dark Multiverse? 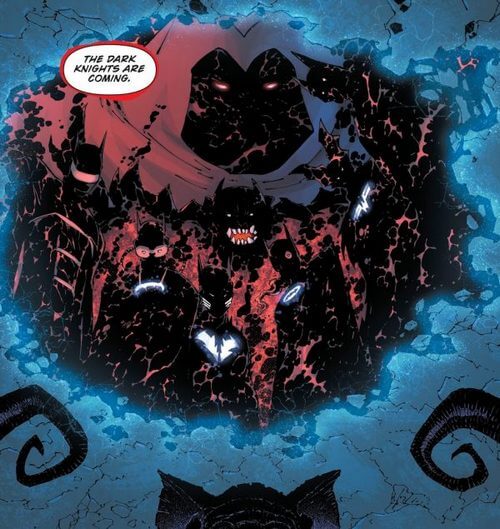 Brace yourself! The Batman nightmares are coming! (Source: Internet)

Multiverse is quite a familiar concept nowadays and we can see this concept widely used in both DC Comics and Marvel Universe. In DC Universe, there are 52 Universes, each Universe works in its own dimension. According to Snyder, these 52 Universes are fixed and stable. But there is another form of multiverse which is much darker, more sinister. This so-called Dark Multiverse is unstable, and each of these Dark Universes reflects the subconscious of man. Fear, hope, despair, etc…, all are materialized in this Dark Multiverse. And when those feelings are gone, these dark worlds will also vanish.

In the latest story of Batman the Red Death, the Dark Multiverse is explained as following:

“Every fear, each bad decision, gives birth to a malformed world of nightmare … a world that shouldn’t exist. And desperate as it fights to survive in the light of the true Multiverse far above … these worlds are doomed to rot apart and die, because they are wrong at their core.”

Based on this information, it is implied that the upcoming villains of Dark Nights Metal are Batman’s nightmares. Each nightmare is a dark version of Batman whose world is left to rot, just like what described in Batman the Red Death. Each Batman nightmare is a question for Batman himself: what if he strayed from his true path and did something wrong?

This concept of Batman nightmares is definitely worth to follow. We know that one Batman is dangerous enough who even once set a plan to counter entire Justice League. Now we have Batman villains who have the full capability of the original Batman, and even far more than that: 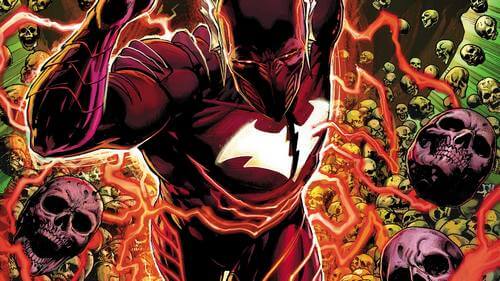 Batman the Red Death is probably the most recognizable out of the 7 Batman nightmares. This Batman wears a typical red armor similar to the Flash. He possesses the power of Speed Force which allows him to gain the power similar to the Flash, but with an additional twitch. The Red Death Batman often leaves a trace of shadow bats. People who are crossed by this shadow bats trail will have their age shortened and they will eventually die.

In Red Death Batman’s Universe, Gotham faced a great calamity which couldn’t be stopped. In order to “save Gotham”, Batman decided to take Speed Force from the Flash, resulting in Batman the Red Death. However, no matter how hard Batman tried, he couldn’t save his world which destined to be ruined.

One interesting thing to note is that Batman Who Laughs seems to be the one in charge of assembling this Batman nightmares team. At the end of Batman the Red Death, Batman Who Laughs told Red Death Batman of the living Universes besides theirs. 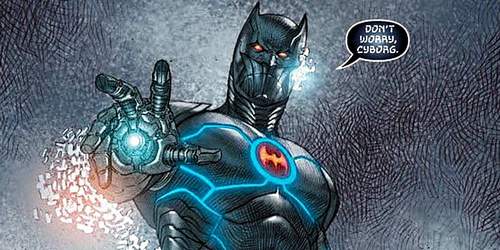 Alfred is an incredible character in Batman family. He is not “simply” a butler in Bruce Wayne’s manor, but also a loyal and skillful supporter for Batman. And of course, Bruce considers Alfred as member of his family. So, the question is: “what will Batman do if Alfred is dead?”

Fortunately, we have the answer in the world of Batman the Murder Machine, where Alfred is no longer alive. In this world, Batman asked Cyborg to upload Alfred’s consciousness into the so-called Alfred Protocol. However, the situation started to be uncontrollable when this Alfred Protocol went online. It killed every single villain in Gotham. It was so relentless that it even killed every hero who tried to stop it, including Batman himself. After Batman’s death, this Alfred Protocol also absorbed Batman, hence the creation of Batman the Murder Machine. 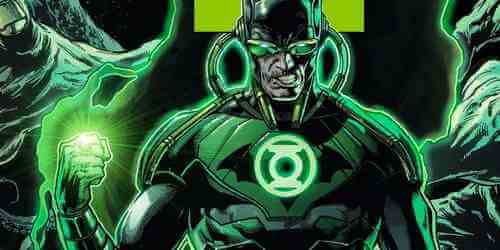 The origin of Batman is always a sad story to talk about, even for long-time DC readers. In the original story, Bruce Wayne’s parents were killed by Joe Chill when Bruce was still a child. After a long time of training, Bruce took his fear of bat in young age as his inspiration and became Batman.

However, what if Bruce Wayne received the Green Lantern ring when his parents were killed? For now, the answer we have is an evil Bruce Wayne/Batman with the power of Green Lantern. After receiving the ring, Bruce used it to kill Joe Chill for his vengeance. But as always, killing at young age didn’t always stop there. It was only a first step of Batman becoming a future deadly villain.

According to Batman the Dawnbreaker illustration, it seems this Batman is skinnier than most of Batman nightmares. He uses Green Lantern ring and he wears a green-black suit with Green Lantern and Batman symbol right on his chest. 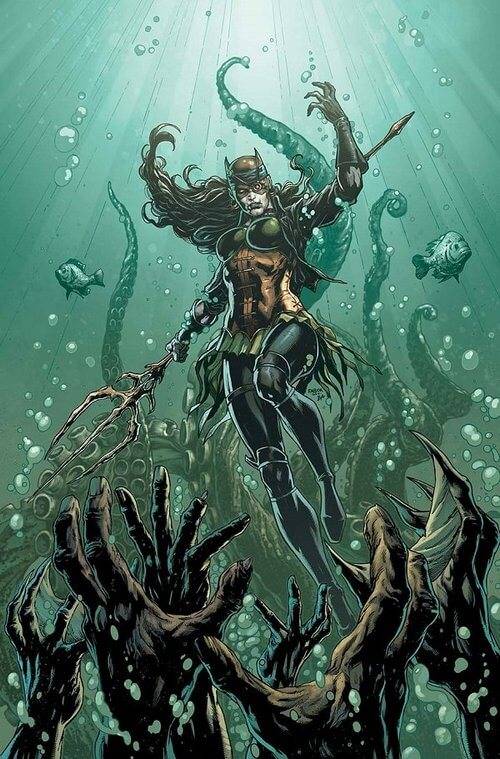 Batman the Drowned seems to be the most mysterious Batman nightmare at the moment. So far, we don’t have any information about this only female Batman, except for her illustration and her appearance in Dark Nights Metal #2.

According to the illustration, we can expect this Batman the Drowned to be a crossed version between Batman and Aquaman. The theme of this Batman nightmare heavily implies water and sea element. She wears a steampunk-style suit and wields the trident similar to Aquaman. If this is true then it seems we are going to see a fearsome Batman with the power of the sea. 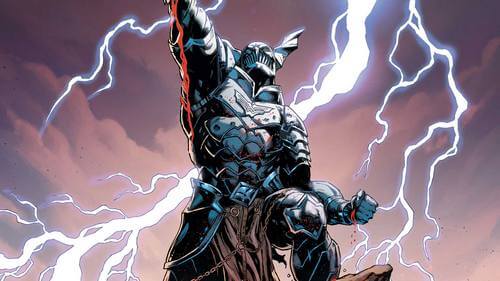 This Batman nightmare seems to be a crossed version between Batman and Wonder Woman, or Ares to be more précised. Batman the Merciless wears a pretty menacing war armor, which kind of resembles the ancient Greece armor. His chest armor has the hybrid symbol of Batman and Wonder Woman, implying that there was an important event occurred between them.

According to the official sneak peak from DC, it seems Batman the Merciless appeared in a world where gods waged war on Earth. The Amazon also had to join the fray, including Wonder Woman. However, Wonder Woman was killed in the war and we can see Batman holding her and screaming in pain. In the final shot, we see Batman confronted a powerful enemy. To fight against this great enemy, Batman decided to wear Ares’s helmet. Probably this event marked the start of Batman becoming Batman the Merciless. 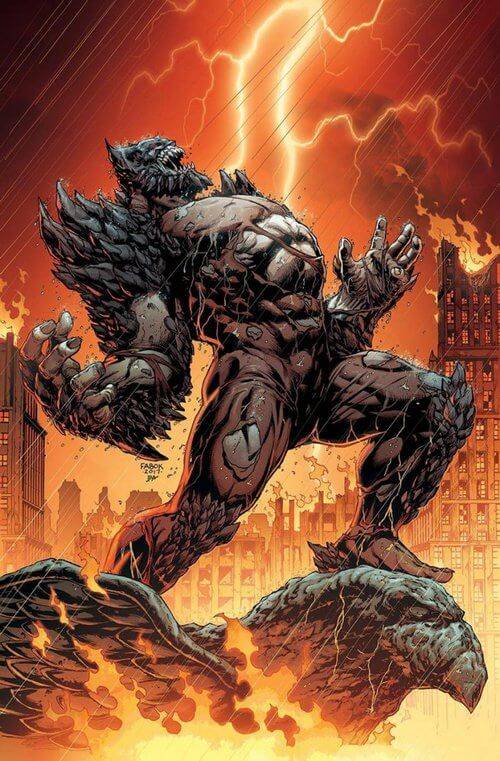 Talking about Superman’s greatest enemies, we definitely have to mention Doomsday – an apocalyptic weapon capable of killing Superman. We know that Superman is still alive in the current timeline, yet, there is an interesting question: “what would Batman do if Superman was killed by Doomsday?”

The answer for this question is rather… terrifying. In the dark world where Superman was dead, Batman tried to find a solution to prevent this from happening again. And by all of solutions Bruce could think of, he chose to inject Doomsday virus into his own body. The result we have is a cataclysmic monster with power of Doomsday, and cunning mind of Batman.

One Doomsday alone is dangerous enough for Superman. But what if Superman has to fight against a Doomsday version with the intelligence of Batman? No doubt that fight will end badly for Superman. 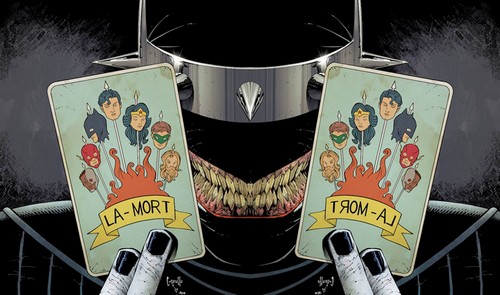 Joker has always been Batman’s greatest and most dangerous foe. He has intelligence level on par with Batman. And more importantly, he is an insane villain who can do more than what we can imagine. Surely Bruce Wayne wanted to kill Joker many times, but he didn’t due to his moral code. But what will happen if one day Bruce finally kills the Joker? The answer for that is the most terrifying Batman nightmare: Batman Who Laughs.

This Batman Who Laughs reflects Bruce’s most insane nightmare: When he killed the Joker, the toxin inside Joker’s heart was released, corrupting Bruce during the process. Hence we have the creation of Batman Who Laughs, the most terrifying Batman nightmare to date.

Batman Who Laughs has already made quite a lot of appearance lately, especially in the current Gotham Resistance event. We still haven’t seen the true extent of Batman Who Laughs’ ability. Yet so far, he seems to be the most cunning and also the leader of Batman nightmares. During Gotham Resistance, he gave Gotham’s most dangerous villains “dream card” which can bend the reality to the owners’ will. So far, villains who received these cards are The Riddler, Dr Freeze, Poison Ivy, and Bane. He also possessed a legion of nightmarish Robins who are like zombies often saying “crow”.

Batman Who Laughs also seems to be responsible for assembling this Batman nightmares team, as we can see from his talk with Batman the Red Death.

To some extent, this nightmare concept isn’t really a new thing in games and comics. Yet, in DC Universe, this Dark Multiverse idea really shakes things up, especially the hype of Batman’s worst nightmares. All 7 Batman nightmares are impactful and they reflect what Batman afraid most in his career. The whole Dark Multiverse event indeed has a great start and we can’t wait to see more of Batman nightmares in action.

2 thoughts on “Dark Nights Metal – Behold the Nightmares of Batman!”