For Ferrari enthusiasts, the upcoming Ferrari Portofino 2018 is highly among the most anticipated sports cars this year. But while waiting for this new charming guy from the beautiful village of Italy, let’s not forget other incredible beasts by Ferrari. When things are not fast enough, what we need is faster, more powerful speedster. And that’s when the grand tourer sports cars Ferrari 812 Superfast comes to play! How “superfast” it is exactly? Let’s find out! 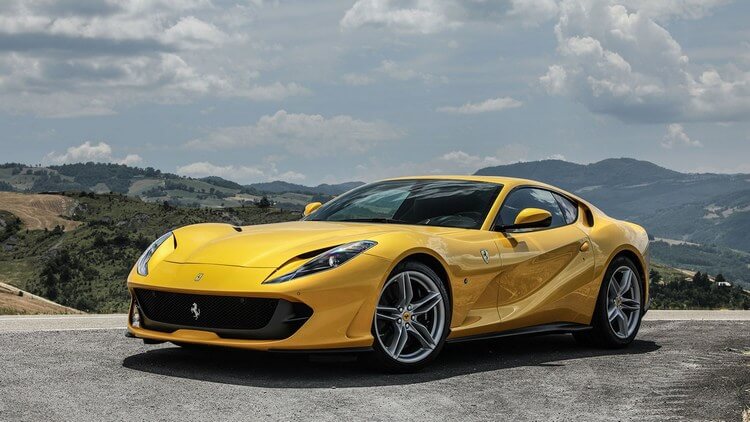 Back to 2012, a fabulous Ferrari grand tourer sports car called Ferrari F12berlinetta (or F12 Berlinetta, the F12, or the F12B for short) was announced and it was phenomenal. It was so phenomenal that it got the “Supercar of the Year 2012” award from TopGear, which pretty much told us how badass this Ferrari was. And just as when we had thought that there was no car which could have surpassed this pinnacle, Ferrari proved to us otherwise with the Ferrari 812 Superfast 2017.

Ferrari 812 Superfast was revealed in Geneva Motor Show 2017 and it is the new successor of our beloved F12berlinetta. To some extent, it is quite safe to say the 812 Superfast is the upgraded version of the F12berlinetta. However, it is not just any other upgrade. It marked the end of an era with grand enhancements with every detail: from the engine, chassis, to aerodynamics. Ferrari indeed nicely mixed between the usability of Ferrari F12berlinetta and the power, agility, and performance capability of the F12tdf. The result from such harmonized combination is the Ferrari 812 Superfast, in which the number “8” represents the powerful 800 horsepower, while “12” stands for the cylinder number. 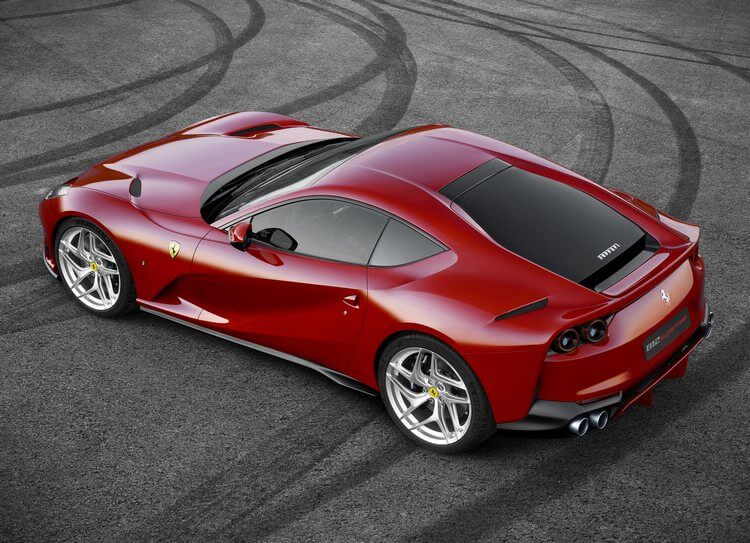 In terms of appearance design, the 812 Superfast does share similar traits like its predecessor F12berlinetta. But that’s only about the first look, to be more specific, the entire 812 Superfast body is specifically designed with high aero-efficiency in mind. Aside from having sexy muscular lines, those lines, vents are clearly not for show. All of them help in enhancing downforce and drag efficiency for the entire car, starting from the front aero cluster to the underbody, side, and the rear spoiler and diffuser. 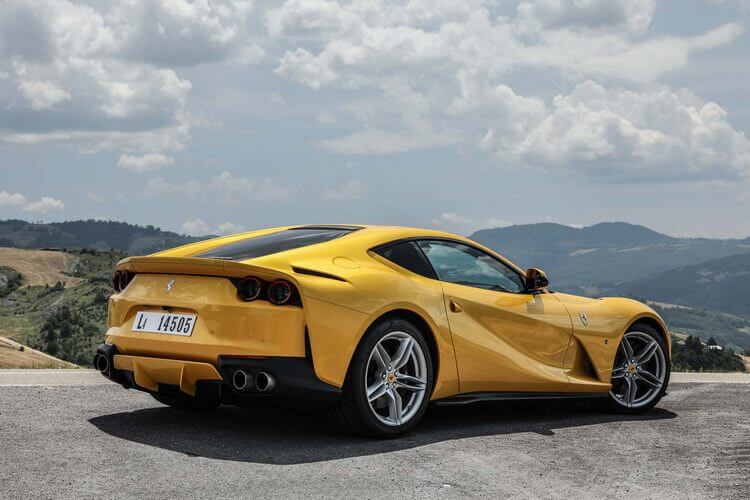 That said; the shining point of aerodynamics from the 812 Superfast seems to come from its underbody. Matteo Biancalana – leader of aerodynamics team shared that: “The main concept was to boost the underbody of the car in order to create downforce and use the body of the car to reduce drag and support the underbody in creating downforce.” To be more specific, this refers to the car’s underbody work including 3 pairs of devices which aimed to redirect the air flow, thus giving even further downforce increase. In addition, its air intakes and vortex generators also enhance the underbody’s performance. At 124 mph, the air pressure will force the up-front flaps open, which stall the front diffuser and improve drag efficiency. 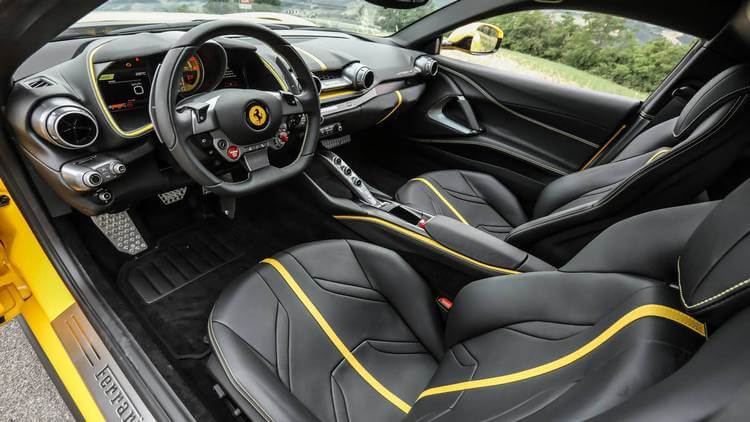 The interior of 812 Superfast (Source: Internet) 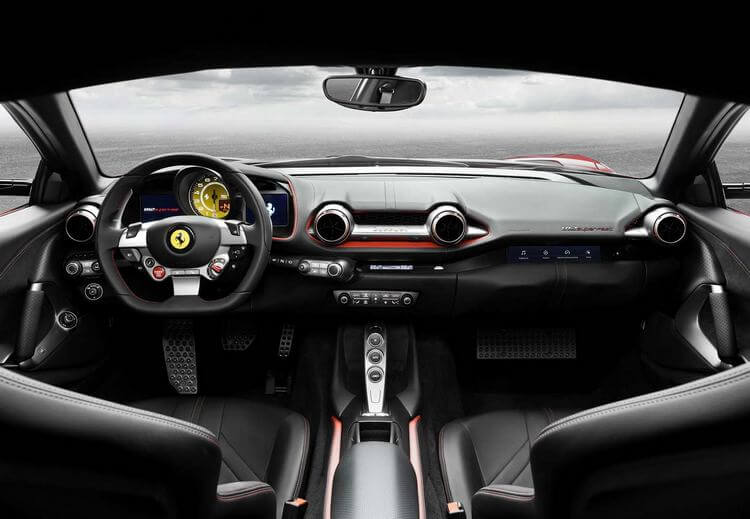 For the interior, Ferrari 812 Superfast does feature quite great and comfortable space. The view is nice for both the front and the sides. On the other hand, the rear view is more a kin to the mid-engine car’s but that would not be much of a problem. For the display, the 812 Superfast does not include a big infotainment screen at the center, but instead, it features a mini-screen on the passenger side. From the driver seat, we have a big tachometer as usual, accompanied by 2 adjustable screens which include all options we require like navigation, phone, and audio. In certain situations, the ride may feel a bit choppy but for the most cases, it works out well for daily use.

So with all that alluring exterior and interior designs, what is the true extent of Ferrari 812 Superfast? 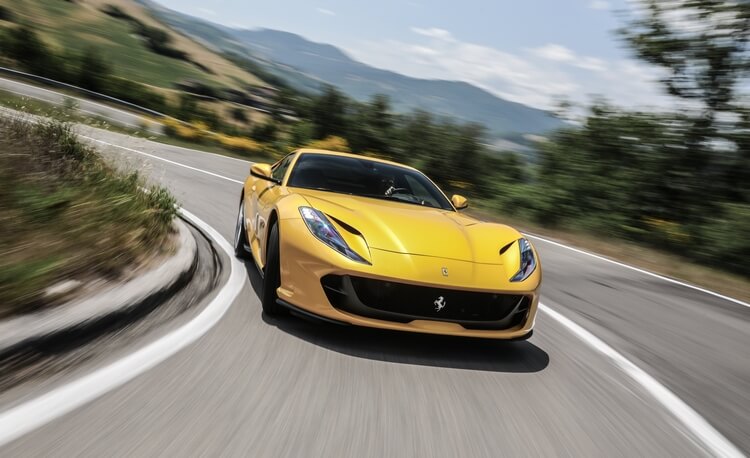 For the engine, we have a 6.5-litre naturally aspirated V-12 front-mounted engine which gives the 812 Superfast a whopping 800 horsepower (or 789 horsepower according to our US metric, but still cool) and 530 fb-ft of torque. This Ferrari grand tourer can reach the max speed of 211 mph and it only takes 2.8 sec to accelerate from 0 to 60 mph.

The 812 Superfast’s engine is definitely the most powerful Ferrari engine for range model to date. While the engine is the upgraded version from the F12berlinetta’s, 75% of its components are new from the pistons to combustion chambers. The most typical change is probably the fuel injection system upgrade with 350 bar pressure. As the results, this V-12 engine can get significantly more air and fuel, thus giving the car tremendous boost in both horsepower and torque. It explains how Ferrari 812 Superfast can easily complete 0-62 mph acceleration within 2.9 sec and 0-124 mph acceleration within 8.5 sec. Another significant change is the seven-speed dual-clutch transmission which gets about 6% shorter in ratio. And as Ferrari explained, this helps reducing upshift and downshift times by 30%. So theoretically, the 812 Superfast can pull out 2 downshifts while holding the left-hand paddle under heavy braking, while the F12 Berlinetta can only pull out 1 with the same amount of time. Overall, the car no doubt feels fantastically fast and it always makes us wonder how far it can go.

When Ferrari named this car “Superfast”, it seems they did not choose that name due to the speed alone. It is also about the car’s incredible performance. One of the biggest changes of Ferrari 812 Superfast is the electric supported all-wheel-steering system (which Ferrari would like to call as “Virtual Short Wheelbase 2.0”), making it the very first Ferrari road car which uses this system. However, this new system does not come in alone; it is a part of a vehicle dynamic system including the F1 traction control and the Side Slip Control 5.0 (or SSC5.0). One of the perks from this dynamic system is the steering enhancement: When the tires get loose, the steering wheel will get lighten in the counter-steer direction which effectively allows driver to make precise course correction.

So what comes out of this dynamic system? The answer is: Ferrari 812 Superfast feels extremely agile. The Superfast feels incredibly fun sliding on track (though it is not so sure yet on road). Interestingly enough, the change by the dynamic system, the steering are so smooth, so subtle that we can hardly detect it. But as the head of dynamic system team – Stefano Varisco said: “This is meant to support the driver. It is not linked to anything autonomous or a self-steering function. If a maneuver is performed in a good way, nothing is suggested by the steering.” Let just say that everything works as excellently as intended.

Combining this dynamic system with the all-body aerodynamics and the revamped V-12 engine, this Ferrari surely give us one “hell-of-a-ride”. 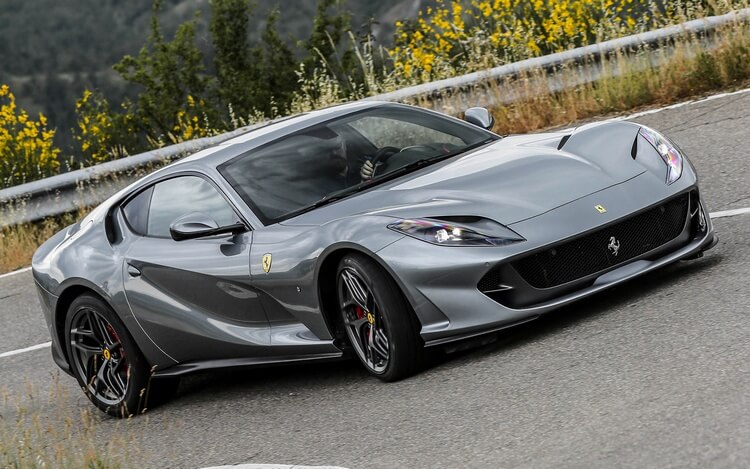 In the end, Ferrari 812 Superfast is “superfast” indeed. It does not simply “superfast” in terms of pure speed, it also means extremely quick reactions for both aerodynamics and handling. The Superfast tells the story of an incredibly fast sports car which feels extremely agile and fun to ride. Although we often consider it as a fine marking about the end of an era, its concept and innovation will definitely not go to waste. Ferrari 812 Superfast does not simply mark the end; it also marks the beginning of the new Ferrari era.

And that’s it folks! What do you think about Ferrari 812 Superfast? Feel free to share with us and for now, thank you and stay tune for more news in the future!