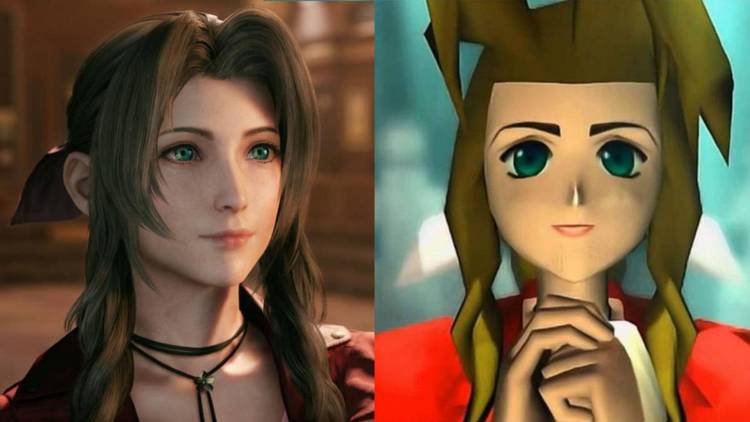 First impression? Incredible! Absolutely stunning! If you ask people who have played this demo, definitely most of them will agree that this demo looks fantastic, both the CGI scenes and the in-game graphic. Even better, the visual quality of both CGIs and in-game graphic are equally good. At least from our perspective, we cannot spot out any downgrade or difference between CGIs and in-game gameplay. And this must be commended, even in this day and age. 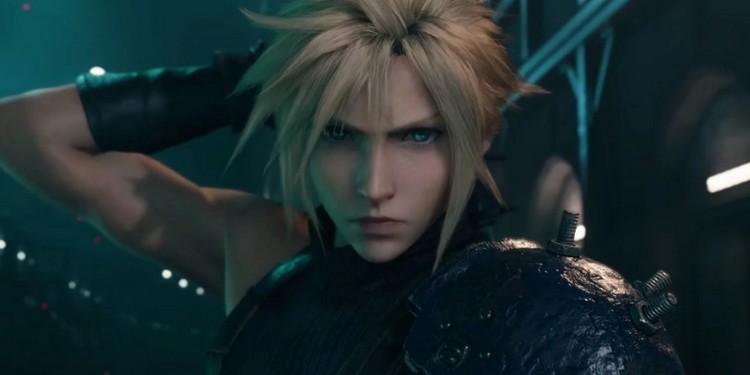 The first cutscene (though it is technically not the beginning cutscene of the game) showed the fans’ favorite “waifu” Aerith (by the way, she looks much, much more beautiful in the new graphic). Soon after we got to see the whole city, and then the camera zoom-in to the beginning level, introducing the good ol’ Avalanche crews including Biggs, Wedge, Jessie, Barret, and of course our main protagonist Cloud Strife. And now, it is time for action!

Action-RPG with ATB system – Is it good? 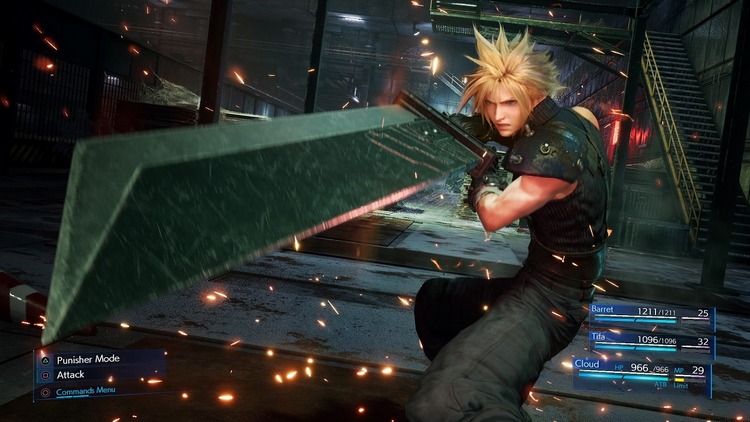 This is one important aspect that many players, especially FF7 fans, are wondering. FF7 originally has turn-based combat, so obviously many people were afraid when Square Enix revealed this action combat system with the ATB aspect. So how is it exactly?

To round up, throughout the demo you will occasionally see tutorial popups which will explain basic gameplay mechanics: 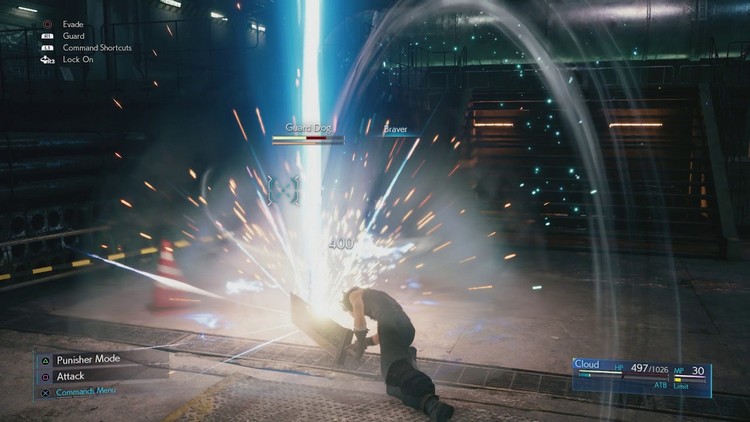 Later on, you will also control two characters in combat (Cloud and Barret). You can use the D-Pad to switch two characters (the other character will be controlled by AI), and during the Command Menu period, you can also use L2 – R2 to give command to your AI-controlled member.

Those are the basic controls, and in reality, this combat system works pretty solid as far as the demo showed. The ATB system, combining with a good difficulty level (especially during boss fight), makes combat more strategic. The ATB gauge gradually refills when you attack or getting hit by enemies. Once a bar is filled, you can press X to use Command Menu and choose between using Ability, Magick, or Item.

There is also a “Classic Mode”… which is honestly a disappointment to say the least. It simply lets AI do the works including dodge, block, move, and normal attack. The only job we need to do is waiting til the ATB bar filled and use the Command Menu. Let just say this mode feels rather lazy from Square Enix’s part, it is not traditional turn-based combat and more importantly, it is not engaging at all. If this is what we get in the full game, we highly recommend ignoring this mode. 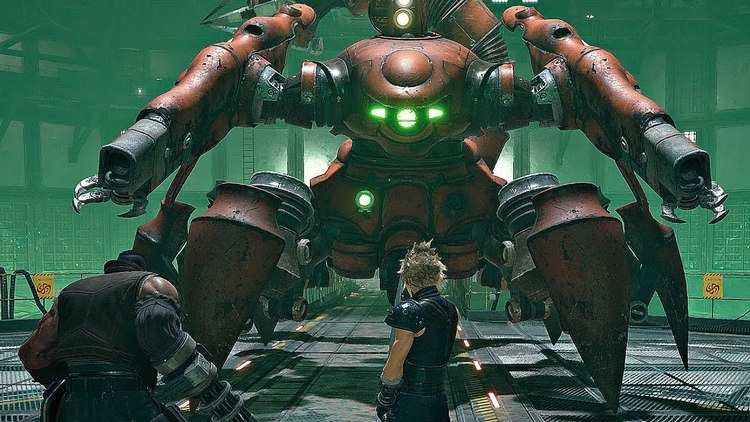 Like the original Final Fantasy 7, the Scorpion Sentinel is the first boss of the game. But in this remake, it looks more stunning, more details, and there are a lot more to its boss-fight mechanics.

Fighting this Scorpion requires us to utilize everything we have learned from the tutorials: keep engaging the boss to refill ATB bar, paying attention to the boss’s attack to time your dodge or block, use Barret’s Thunder spell to stagger the boss faster, etc… The best thing about this fight is: you definitely cannot just spam ▢ normal attack to win. The boss has some devastating attacks which can easily deal 300+ damage if you do not pay attention. You can have lots of Potions, but you need to fill ATB bar in order to heal. And in phase 2, the Scorpion will activate its shield, forcing you to find and attack its weak spot.

All of those mechanics make this boss fight extremely engaging and quite challenging. It is not super difficult by any means, but it does require players to pay attention and think. Considering the purpose of this demo, we say they have done this boss fight justice.

How long the full game will be? 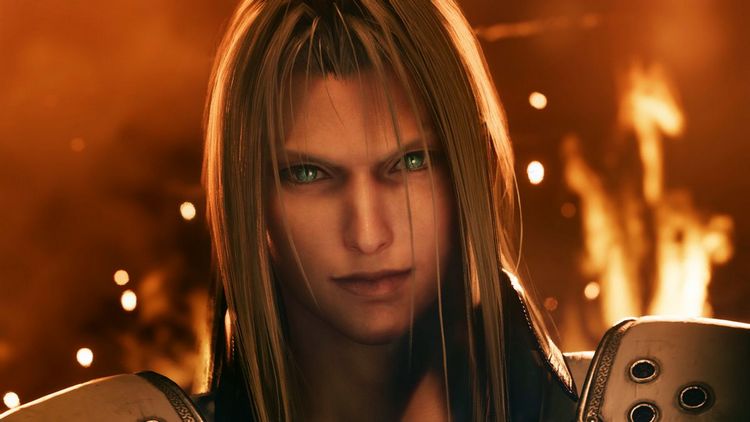 We will see Sephiroth, but not in this demo… (Source: Internet)

The demo is around 7.5 GB, you can easily beat it within 45 minutes or less if you already know what to do. In our case, we spent around 1 hour, but that includes sightseeing, exploring around and find items.

The full game though is definitely much, much longer than this. According to the devs, it may take around 50-60 hours to finish. That said, we are not sure if this 60-hour mark is for completing the main campaign only, or, including side activities and explorations. Nonetheless, 50-60-hour mark is still a good length, even if we suppose that the main campaign takes around 30 hours and the remaining 20 hours is for exploration & side quests.

Another unfortunate thing is that this Remake will only cover the first part of the original FF7. So we can expect there will be FF7 Remake Part 2 and Part 3 in the future, though the estimated release date is not available yet.

Overall, this demo is still really awesome and it will give you a solid first impression. Even if you have not played any FF game before, this demo is still worthy to check out. After that, you can decide whether you want to get the full game or not.

And that’s it folk! Will you get Final Fantasy 7 Remake? Feel free to share with us and for now, thank you and stay tune for more news in the future!