Since 2014, The Game Awards (TGA) has always been the most anticipated event of the year for gamers. It is the ceremonious event for gaming as players get to see their most favorite titles compete for the “best games of the year” awards. And in every TGA event, there are lots of incredible moments (and funny ones too), so with no further ado, here are the most memorable moments in The Game Awards 2018!

3 Big-Bosses started the show together!? 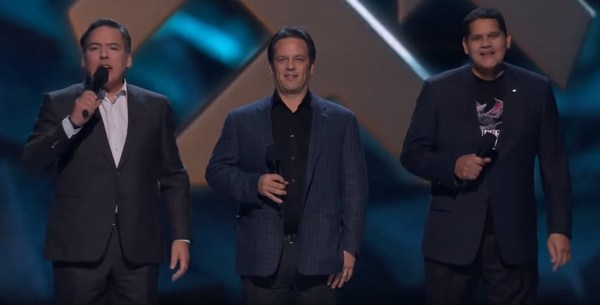 The Big Three are on stage!!! (Source: Internet)

Kicking off The Game Awards 2018 we have seen a few awards like Best Action Game and Best Role-Playing Game (both awarded games totally deserve it by the way). But then comes the surprising opening: 3 big bosses of the three major companies: Nintendo US President – Reggie Fils-Aimé, Microsoft Xbox President – Phil Spencer, and Chairman of SIE Worldwide Studios – Shawn Layden got on stage together!

Since each of these companies is the owner of their respective major gaming devices, we would think that it would be impossible to see them stand together like this. And such common belief only makes this opening even more surprising. Unfortunately, there was no cross-platform announcement as some people would hope. But nonetheless, seeing all the “big three” like this to celebrate this gamers’ event is still a delightful moment to watch. 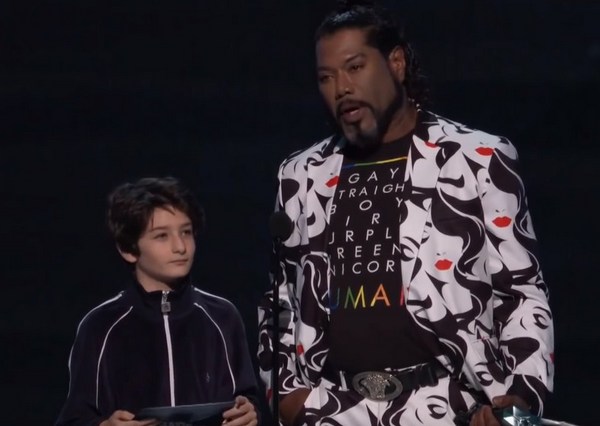 Frankly speaking, not many people would pay attention to the Best Content Creator Award. However, what made this particular award interesting were the two announcers: Christopher Judge and Sunny Suljic. They are actors who played as Kratos and Atreus in the incredible PS exclusive of this year – God of War. As you can already guess, many, many people were hoping Judge to say the infamous Kratos’s quote. And oh boy… that quote “Read it boi!” sounds so satisfying! According to a number of people, this announcement was really a heavy blow on Bethesda. Especially if you have been following the recent debacles of Fallout 76, you will probably have a similar feeling.

The Outer Worlds is the upcoming sci-fi RPG title from Obsidian Entertainment. The game seems to take inspiration from Fallout and maybe No Man’s Sky? The trailer shows quite a beautiful world with vibrant colors and livelihood in it. The game also reminds us a lot of Fallout with the rustic, post-apocalyptic aesthetic design. And the best part is: the game is told to be developed by the original creator of Fallout and the creator of Fallout New Vegas. Those who experienced both of those games will probably get most hype from this announcement. For now, it’s still too soon to say anything about the game’s quality. But let’s just hope it turn out to be fantastic. 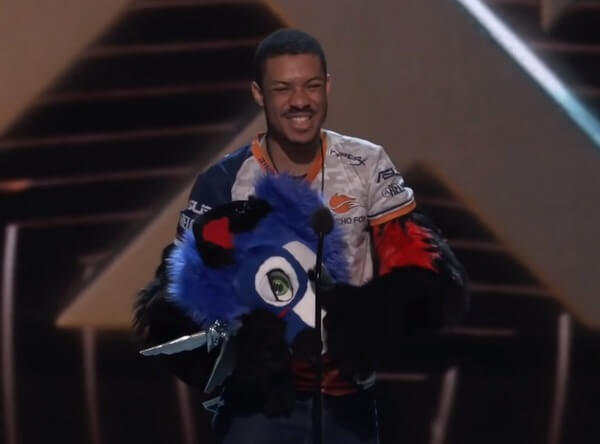 Considering his competitive fighting-game skill alone, personally we do think SonicFox deserves this award. He got tons of achievements throughout his gaming career like being EVO champion 4 times, winning Injustice Gods Among Us in 2014, Mortal Kombat X in 2015 and 2016, and Dragon Ball FighterZ in 2018. He also won Injustice 2 Pro Series Champion consecutively in 2017 and 2018.

That said; his moment at TGA 2018 was kind of… awkward and cringy to certain viewers. Some even criticized his claiming of being gay and black as they believe such claim is unnecessary and irrelevant in a gaming event. Nonetheless, his reaction was still honest in our opinion and we don’t think he purposely pushed political agenda onto the event. 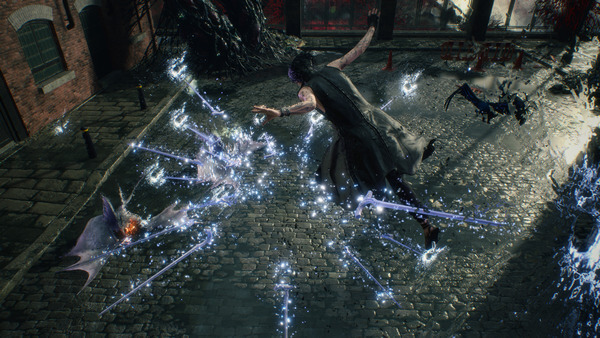 Capcom is really on a roll this year with two greatest announcements: Resident Evil 2 Remake and Devil May Cry 5. And just recently in TGA 2018, they showed another incredible trailer for Devil May Cry 5, featuring all 3 main protagonists: Dante, Nero, and the new guy V. The trailer looks as incredible as ever with heart-racing soundtrack and the fast, brutal gameplay.

It also reveals V’s gameplay and by far, he seems to be semi-ranged character who controls two familiars in combat: the black panther called Shadow and the huge demon-bird called Griffon. V also seems to have a “second transformation” which turns his hair to white. In this form he can summon the third familiar called Nightmare, a black goliath-like demon. Aside from V’s showcase, we can also see moments when these 3 protagonists appear at the same time and fight together, which is extremely awesome as they can pull off some combos and combination attacks.

And yeah let’s talk a little bit about the live-performance of Devil May Cry 5 main theme – Devil Trigger. We have seen some people said that this theme is underwhelming compared to previous games’ metallic, hardcore soundtrack. Yet from our perspective, we actually like this new theme. It sounds cool especially when coming along with gameplay. It is just that the live-performance was not that impressive (or even cringy as some people commented). 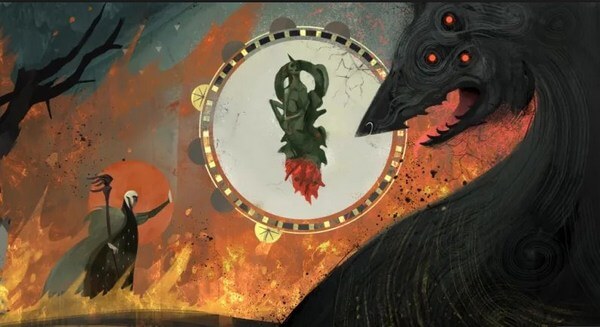 To be honest, the new Anthem trailer was kind of “okay-ish”. Visual-wise it does look cool, but for a “story trailer”, it still looks uninspiring with the generic “good guy vs bad guy” trope. That said; Bioware’s main attraction was in fact the Dragon Age 4 announcement teaser. Surely it does not show any major visual or gameplay, but it is normal thing for a teaser like this. At the very least, we know that there is a Dragon Age title at work and it already has a story direction which continues what’s left from Dragon Age Inquisition’s ending with Solas the Dread Wolf. 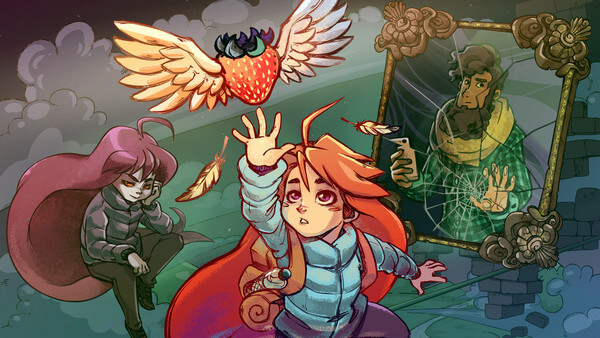 Being nominated in 4 awards and the winner of Best Independent Game Awards, Celeste totally deserves every single credit as a beautifully crafted indie game in both terms of gameplay, visual, and story.

Celeste is an indie platformer created by Matt Thorson and Noel Berry. It tells the story of a girl named Madeline who needs to climb on the top of Celeste Mountain. Along her path, she will meet various people and experience through many challenges. On the surface, it may look just like a simple platformer game; yet, it actually has lots thought-provoking ideas and meanings underneath. In general, it is a great indie game to check out especially if you want to get a break from the AAA landscape. The game is now available on all platforms: PC, PS4, Xbox One, and Nintendo Switch. 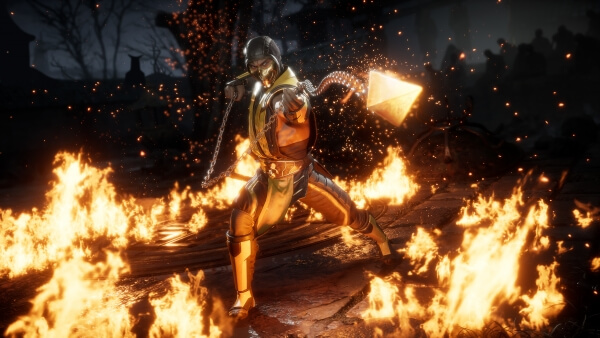 “Get over here! Again!” (Source: Internet)

Every time people see Ed Boon on stage, they will immediately think about Mortal Kombat series. This time in TGA 2018, it is no different and plus, Ed Boon got us good with a “surprising” Mortal Kombat 11 trailer. Once again, fans get to see the revenant shinobi – Scorpion, but this time, his enemy was not Sub Zero but rather, an evil version of Raiden who wielded the sinister crimson lightning. Just like always, the visual looks fantastic and the combat looks even gorier and more brutal than before.

The only downside of this trailer according to many viewers is the background 21 Savage song which sounds questionable at best. Now to be clear, we don’t think the music itself is bad, it is just that it does not feel fitting for a Mortal Kombat trailer. In any case, its community reveal is said to be started on January 17, 2019 and its global launch will be April 23, 2019. So be ready kombatants cuz Mortal Kombat 11 tournament will begin in 2019! 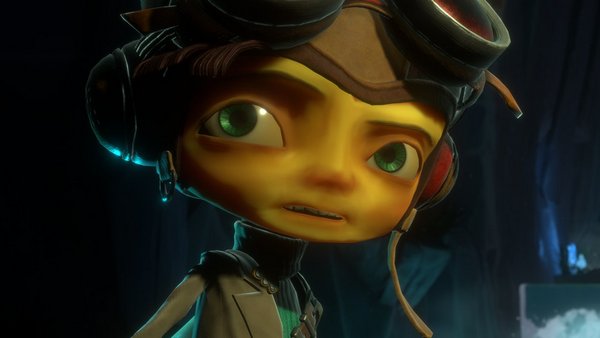 Back in 2005, Psychonauts 1 was released for PC, Xbox, and PS2, and the game was massive hit. And just any other “old but gold” title, fans have been dying to see a new Psychonauts sequel. Luckily, their anticipation finally got answered with the latest announcement of Psychonauts 2. Coming to the PS4/Xbox One generation, we can clearly see a huge leap of graphic since the first Psychonauts game. Our main protagonist is still Raz, the runaway circus boy, but, he is now an official member of the Psychonauts organization. Yet in such a prestigious place, there is a hidden secret which can bring destruction to the whole organization. What’s that dark secret? We will soon find out in 2019. 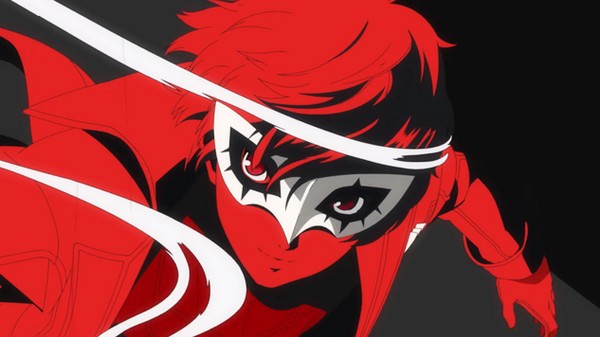 After all the major awards, we now come to the final moment: The Game of the Year Award!… But wait, what happened? Everything sudden went dark!? Then comes one of the biggest surprise of the event: Joker character DLC from Persona 5 for Super Smash Bros Ultimate.

In case you don’t pay attention to J-RPG landscape, Persona 5 was an incredible J-RPG game from Persona series released worldwide in 2017. Also, it got the Best Role Playing Game in TGA 2017, which pretty much showed us how awesome this title is. Of course, many people did not care much about this. But for many Super Smash Bros Ultimate fans and Persona 5 fans, the Joker DLC announcement was a fantastic moment which absolutely no one expected. Even the presentation alone was cool enough to captivate the audiences.

Some people also thought that such collaboration between Persona 5 and Super Smash Bros Ultimate is kind of irrelevant since Persona 5 was a PlayStation exclusive. But one thing they did not remember is that the Persona series did have 2 games available only on Nintendo platform: Persona Q for Nintendo 3DS, and the upcoming Nintendo Q2 for Nintendo Switch. Anyway, we would definitely enjoy seeing new characters from different games in Super Smash Bros Ultimate. 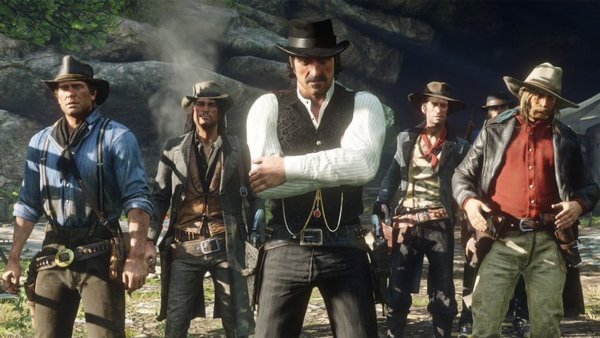 We have already seen Red Dead Redemption 2 winning many major awards, including: Best Narrative Award, Best Performance Award, Best Score/Soundtrack, and Best Audio Design Award. This game totally won by a landslide and we do think it deserves such high praise. Not only it tells an incredible Wild West story, it also sets a new bar in both terms of open-world design and the incredible small details. The world of RDR 2 feels alive and stunning, and all the characters are fantastic despite the somewhat generic Wild West story. To this point, this game is pretty much expected to be the Game of the Year, until…

This was such an intense “plot-twist” in TGA 2018. As we mentioned, most audiences and viewers would expect Red Dead Redemption 2 to win the Game of the Year Award given its winning streak. Yet, the ultimate winner turned out to be God of War 2018.

Objectively speaking, both RDR 2 and God of War are the two heaviest contenders this year. Both of them are equally deserve the award and gamers would be happy to see either game earning the glory.

Unlike RDR 2, God of War is a more linear experience rather than focusing on creating a huge open-world to explore. In addition, God of War represents a daring move from Cory Barlog and the folks of Santa Monica Studios. They have changed God of War direction and it turned out to be massive success. Meanwhile, RDR 2 stays true to its root: a fantastic, detailed open-world with so many things to do and explore. It keeps the same tradition of Rockstar’s open-world style while making it bigger and better.

And that’s it folks! Which is your most favorite moment in TGA 2018? Feel free to share with us and for now, thank you and stay tune for more news in the future!