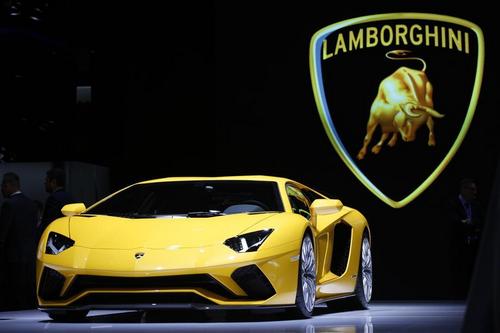 The name Aventador comes from the name of a bull which fought heroically in Zaragoza arena, Spain, 1993. Thus, it received the Trofeo de la Pena La Madronera for its courage. Hence the name of one of Lamborghini’s most remarkable family: Lamborghini Aventador.

As Lamborghini stated themselves, Aventador is an iconic design. Therefore, the aim of designing Lamborghini Aventador S isn’t creating something totally new. Rather, it’s about enhancing and making this iconic design even better. This time, we can still see the tradition design: a combination idea of jet fighters, fearsome cobra, and menacing spaceship. Based on this design, the developers of Aventador S enhance it from all aspects to make empower its performance. With the new upgrade, Lamborghini Aventador S receives an increase of 130% more front downforce. The air side vents are also enhanced for higher efficiency and turbulence reduction.

As a supercar, Lamborghini Aventador S’s interior is exotic and theatrical designed. New installments are also implemented such as the Apple CarPlay for central touchscreen and the optional telemetry system. However, putting the exotic look aside, Aventador S’s interior still suffers from common supercar’s cramped space and limited visibility.

First of all, why Aventador S is the second-fastest car in the world? Of course it’s all thanks to its tremendous speed comes from the enhanced V12 engine. This enhanced 6.5-liter V12 engine comes with enhanced tuning and valve tuning, thus giving Aventador S strength of 730 horse power (740 according to Lamborghini’s statistics). This tremendous power is only second to Bugatti Chiron 2017 which possesses an absurd amount of 1500 horse power.

That said; speed is not the real highlight of the new Lamborghini. The most significant upgrade of this new beast is the 4-Wheel –Steering system and the ECU:

Essentially, this 4-Wheel-Steering aims to control both the rear wheels and the fronts, which give the car more stability and agility. In fact, many other cars have implemented this system such as Audi Q7, Acula TLX, or BMW 7-Series. However, we can safely say that Lamborghini is the one who brings this concept even further.

But again, it will be a big miss if we just mention this 4-Wheel-Steering system without mentioning the Engine Control Unit (ECU).

The ECU is in fact the brain of the entire Lamborghini Aventador S. It controls all aspects of the car including rear-wheel-steering, 4-wheel-drive, brakes, suspension, throttle map, and gear changes. Eventually, it helps Aventador S to feel as one, easy to control in harmony just like Maurizio Reggiani, technical chief of Lamborghini stated: “we have never been able to achieve before, and you can feel this as soon as you start driving the car, at any speed, so not just when you are going fast”. And true, this ECU really provides totally better car handling and response.

Lamborghini Aventador S provides 3 common modes:  Strada mode for street, Sport mode for wet circuit, and Corsa mode for fast laps. But this time, it has the fourth mode which is “Ego” mode. Aside the “fancy name”, Ego mode is really handy as it allows drivers to customize settings including powertrain, steering, and suspension. But think about it, the name “Ego” is quite fitting for this mode since we, the drivers, can customize things depending on our own… ego?

In overall, Lamborghini Aventador S provides an excellent sense of power, and also the sense of control. Aventador S’s enhanced 4-Wheel-Steering system and Engine Control Unit make the new beast feels extremely fluid and agile. It essentially feels like we are actually driving it rather the other way around.

On the other hand, Aventador S still doesn’t seem to be a perfect beast. Some people report that it still has issues with the clunky gearbox. While others say that the automated manual transmission still has long pausing time between uncontrolled staggers. That being said, these drawbacks still don’t take away all the fun and pleasantry while driving Lamborghini Aventador S.

One thought on “The Great Bull Marches Again! In Style! – Lamborghini Aventador S”