1. What is Sword Art Online Alicization? For those who have not caught with Sword Art Online for a while, Sword Art Online Alicization is originally the fourth major arc of the Sword Art Online light novel series written by Kawahara Reki. It continues Kirito’s story after the Phantom Bullet Arc, featuring a brand new world called “Underworld.” This is also the longest Sword Art Online arc to date which has spanned throughout 12 volumes from Volume 9 to Volume 20. It is also arguably the best Sword Art Online storyline to date as it dwells into darker, more compelling plots and also, much better character developments than any previous arc.

Before the official launch of its anime adaptation, there was already a manga adaptation which has around 14 chapters so far. And then just in Anime Fall 2018, Sword Art Online Alicization has been finally on air and it will be a 4-cour series, which means SAO fans will get to enjoy this exciting arc for a whole year.

It has been 4 years since the first episode of Sword Art Online season 2 in 2014 and judging by the visual alone, we can say A-1 Pictures has spent lots, lots of effort into making this Alicization Arc a truly fantastic SAO 3rd season fans have been waiting for. 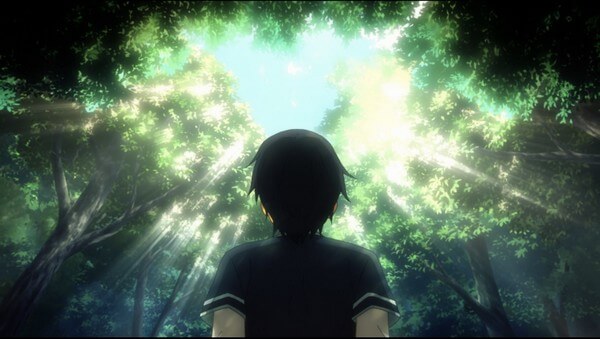 Compared to SAO season 2, we can clearly see a huge step-up in terms of visual. Everything looks extremely polished, vibrant, and gorgeous from the backgrounds to the characters. And this is probably the best thing we are really like about the first 4 episodes: the animation is undoubtedly superb especially in the most recent episode 4. In this episode, we get to see Kirito fights for real with a goblin leader (by the way, is this a goblin season?). The animation looks sleek. The flashy sword-slashes are pleasing to watch. And the graphical gore element is quite surprise in our opinion, yet somehow it does set the tone for this season as a grim and bloody story for real. 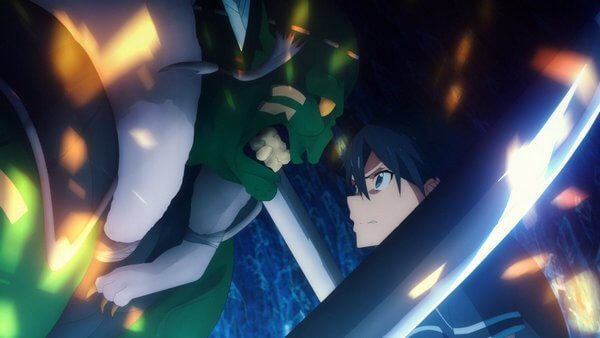 This fight is awesome! (Source: Internet)

To even more surprise, A-1 Pictures has actually managed to keep up a consistent visual quality throughout the 4 episodes. When the first episode was released, many people are quite impressed with its quality. However, most people were still not sure whether they could maintain the same quality level in later episodes. And for now, personally we say A-1 Pictures has finally nailed it and we are hoping to see more of this high effort for the rest of this season. 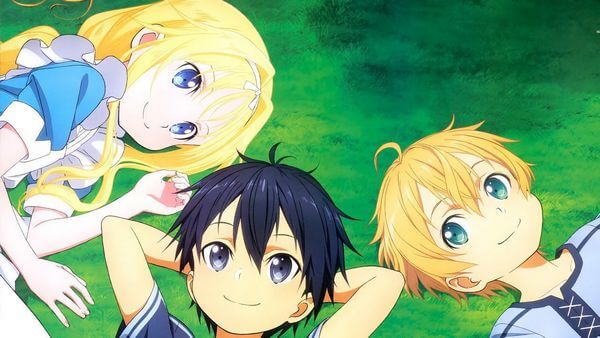 As mentioned, Sword Art Online Alicization is expected to have much darker plots than the previous arcs. It takes place after the Phantom Bullet Arc as Kirito begins his new job of testing a new FullDive technology called Soul Translator (STL) via a new virtual world called Underworld. This technology is said to transfer a person’s consciousness, or soul, into the virtual world. And so, this person can experience a “new life” and it feels so, so real that he/she does not realize they’re in virtuality. But when he/she log out, he/she will not have any memory regarding that world. In case of Kirito, he experiences a new life in the so-called Underworld and meets two new friends Alice and Eugeo. Unfortunately one day, Alice was captured due to her violation to the law from the Taboo Index; while Kirito and Eugeo could not do anything about this.

Back to real world, Kirito forgets everything about Underworld, although he still retains certain sensation and knowledge of this new FullDive technology. One night, Kirito and Asuna walked together, but then he was attacked by Kanamoto Atsushi a.k.a Death Gun with the last succinylcholine syringe. Kirito soon falls unconscious and for some reason, he wakes up in Underworld while still has full memory of his true-self. And so, he has to find out what is going on and tries to return to the real world. 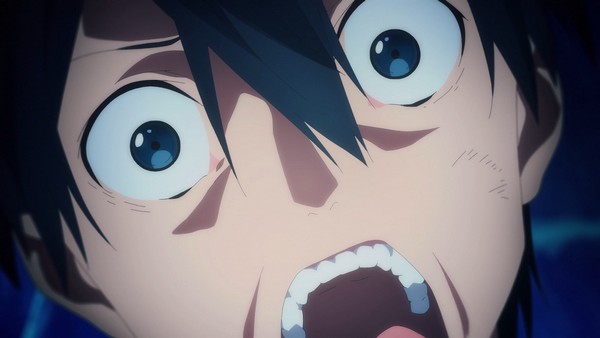 Quite a long synopsis, but so far we pretty like this new story. To certain extent, it reminds us of the first Aincrad Arc. In the Underworld, everything feels so real that it took Kirito quite a time to finally realize he is in a virtual world. Thus, it is further proved in the fourth episode that the pain in this “game” is extremely real. When Kirito was slashed by the goblin leader, he could feel an immense pain just like in real-life. It was such a huge surprise that Kirito did not want to believe it at first. And based on this scene, it set up an impression that the pain and death in this virtual world are very, very real, to a point that Kirito would be dead for real if somehow he died in this virtuality. 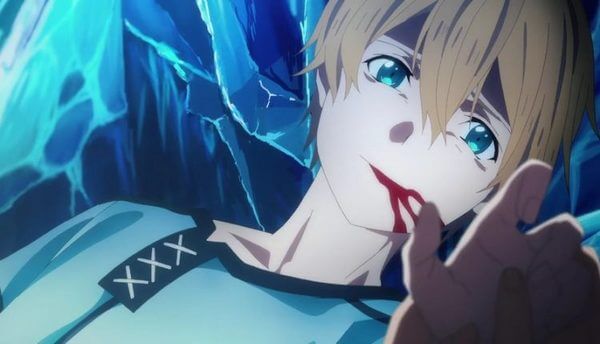 The death of Eugeo. (Source: Internet)

In any case, this impression is really effective and necessary for this third story arc as it “deceptively” breaks the “Overpowered Kirito” image. Back in SAO season 1 and 2, Kirito tends to be a badass character who is so OP that it’s hard to feel any danger for him. He looks like being able to overcome every obstacles, especially in the Phantom Bullet Arc in which he can easily destroy any soldiers and even deflects bullet with his “Jedi lightsaber.” But in this third season, we get to see a more vulnerable Kirito. Although he is still a pro-swordsman, he can still feel pain, and thus fear and death. In fact, he was almost killed by the goblin if not for Eugeo’s intervention. And during that moment, we can see Kirito’s fearful emotion, something which we don’t often see in previous seasons.

From our perspective, the first four episodes of Sword Art Online Alicization have finally set the tone for the rest of the series: a more serious, darker, and more dangerous journey than ever before. It successfully creates opportunity for characters to show their personalities and development. Like Kirito, we finally feel like Kirito is truly struggling for his life. He is still a “skilled gamer”, but no longer a god-like character, and thus, we get to see more of Kirito’s inner thought and personality.

So far, we believe that the character aspects in Sword Art Online Alicization are much better than before. Again as we discussed, the dark tone of Alicization Arc successfully sets up a nice opportunity for different characters to truly shine with personalities and developments. 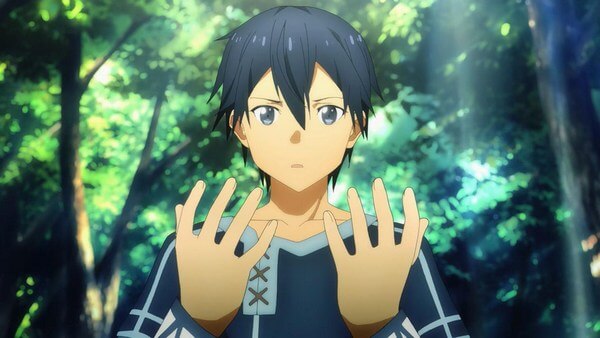 Once again Kirito is the prime example here: He feels much deeper and exudes more personality although it has only been 4 episodes. Right in the first episode, we get to see more of Kirito’s inner thoughts as he tries to figure what’s going on. He showed a clear confusion at first as he did not understand where he was: a real world or a virtual world. And then we come to the best part so far which is the battle between Kirito and the goblin leader. If you’re just like us who have an impression of an “OP Kirito,” you probably thought that Kirito would simply straight-up beat all the goblins. Yet surprisingly, he was slashed, making him shocked and terrified that the pain was so real. This broke the “OP Kirito” image and instead, we got to see a vulnerable Kirito who can die for real even though he is still an experienced warrior. Some may argue that this scene only creates false information since Kirito will win nonetheless. However, the core value is that it does set up the overall theme of Alicization Arc and show a vulnerable Kirito. After all, we don’t want him to die so early, do we?

The new prominent character – Eugeo – also seems to be an interesting character. At the beginning, Eugeo looks like a timid guy who is bound by the world’s law. He did not do anything to save Alice, partly due to some weird restriction applied upon him. As we followed his story, we soon found out that Eugeo actually wanted to save Alice, he wanted to do something, yet he himself was restricted by the village’s rule. He did not dare to face Alice’s younger sister Selka since he felt extreme guilty for not doing anything. And later on, Eugeo became the MVP of the fight with goblin as he saved Kirito from being killed by the goblin leader. It makes Eugeo a much more fascinating character as he is not an useless man, but rather, an important character who is growing.

In any case, this is partly thanks to this new storyline which creates an opportunity for other characters to shine rather than only Kirito himself. Eugeo proves himself to be one of the “best bros” in SAO Universe, while Kirito can show more of his personality and have better opportunity to develop. From our perspective, Alicization Arc has managed to show much better character development, something which was sorely missing from the previous two seasons. 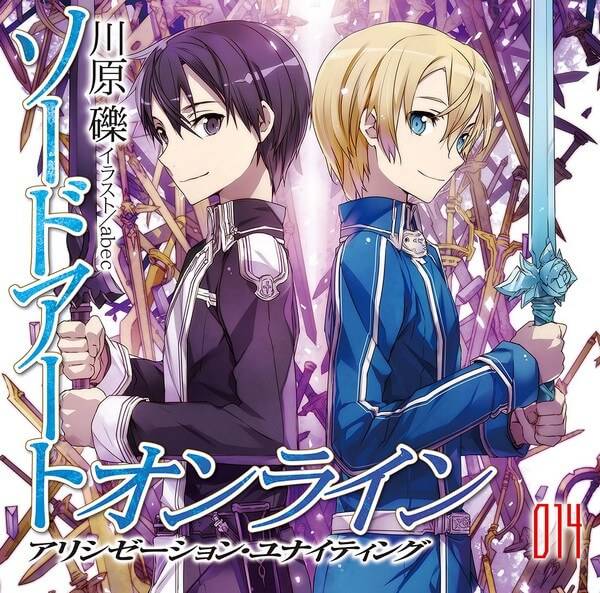 What do you think of Sword Art Online Alicization? (Source: Internet)

At the moment, Sword Art Online Alicization truly excels with high quality visual, animation, a more interesting storyline, and better character development. This third season looks highly polished and it covers the character development which was extremely needed in previous seasons. And though the story progression may feel slow so far, personally we don’t feel it like a problem since the anime can make use of this slow pace to fresh out all the characters. For now, the current verdict for Sword Art Online Alicization is an 8/10. If it can continue this high production value, this SAO 3rd season can be a 9/10 and we can easily how it can blow everything out of the water this year.

And that’s it folks! What do you think about Sword Art Online Alicization? Feel free to share with us and for now, thank you and stay tune for more news in the future!